When two teams from the same outfit advance to a tournament championship and finish within a conversion of each other, then nearly everything that preceded the final whistle evolved in its best-scenario form. National Small College Rugby Organization (NSCRO) did just that, and sent two women’s select sides to the Las Vegas Invitational for a 1-2 finish in the college division.

“The final was pretty much them enjoying themselves,” said NSCRO Women’s Commissioner Bryn Chivers. “When tackles were being made, if there was an opportunity to not smack the smart out of somebody, they took it. If someone went down, they got picked up and dusted off. But if someone got a break, then there was a good chance they’d get hauled down from behind with a really good tackle. Had [NSCRO] Blue kicked the conversion [against NSCRO White] then it would have been a tie game, and that would’ve been interesting. We would have just walked away: That was fun!”

Taking two teams was an experiment, but veteran select side coaches Chivers and Jeff Noe drove the effort. One animated, the other reserved, the pair work well together and introduced Catholic University coach Alex Schaefer and former NSCRO captain Mary Kate McNulty into their systems. They shared on- and off-field demands, all in the name of cultivating a player experience that radiated respect. 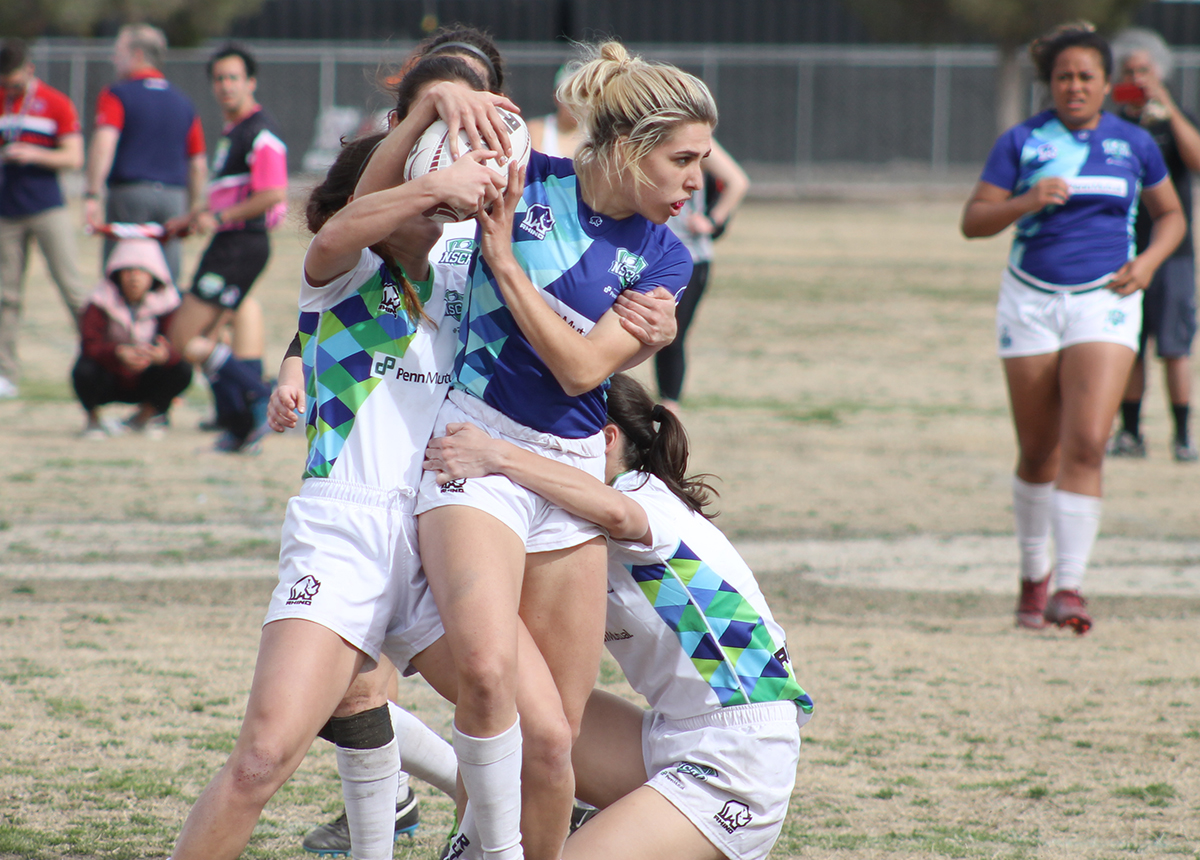 “The players, they have to feel special. You’re up at 6 a.m., so when they wake up their laundry is clean and breakfast is waiting for them, or the trainer’s room is open,” Chivers highlighted trainer Brittany Woodworth’s crucial role. “You might be up until 2 a.m., but these are the things that make you feel like a team and what help you succeed on the field.”

That’s important when dealing with select sides, which have a limited time to develop a game strategy and style. The LVI featured many stand-alone college teams, which don’t have to worry about creating a new chemistry. To boot, only four of the 24 players were returners, so while everyone came in as a good athlete, little could be predicted in terms of cohesion.

“We took risks on players, some who never played 7s before, or some who hadn’t been at the all-star championship. You don’t know what’s going to work,” said Chivers, who didn’t split the group into teams until the final prep day. “All the forwards were relatively big and relatively quick, so it was hard to divide them up and really say: This is the better group.”

Jasmyn Nash of UM Moorhead was one such unknown. Selectors jotted down her name when the big, strong, quick player beat a Wayne State College wing for a 75-meter try at 15s nationals. She had never played 7s, did some try-scoring in Vegas, and played really well. Eden Liebenthal from the University of South Dakota was another example. She’s a young scrumhalf with little experience, but shines. 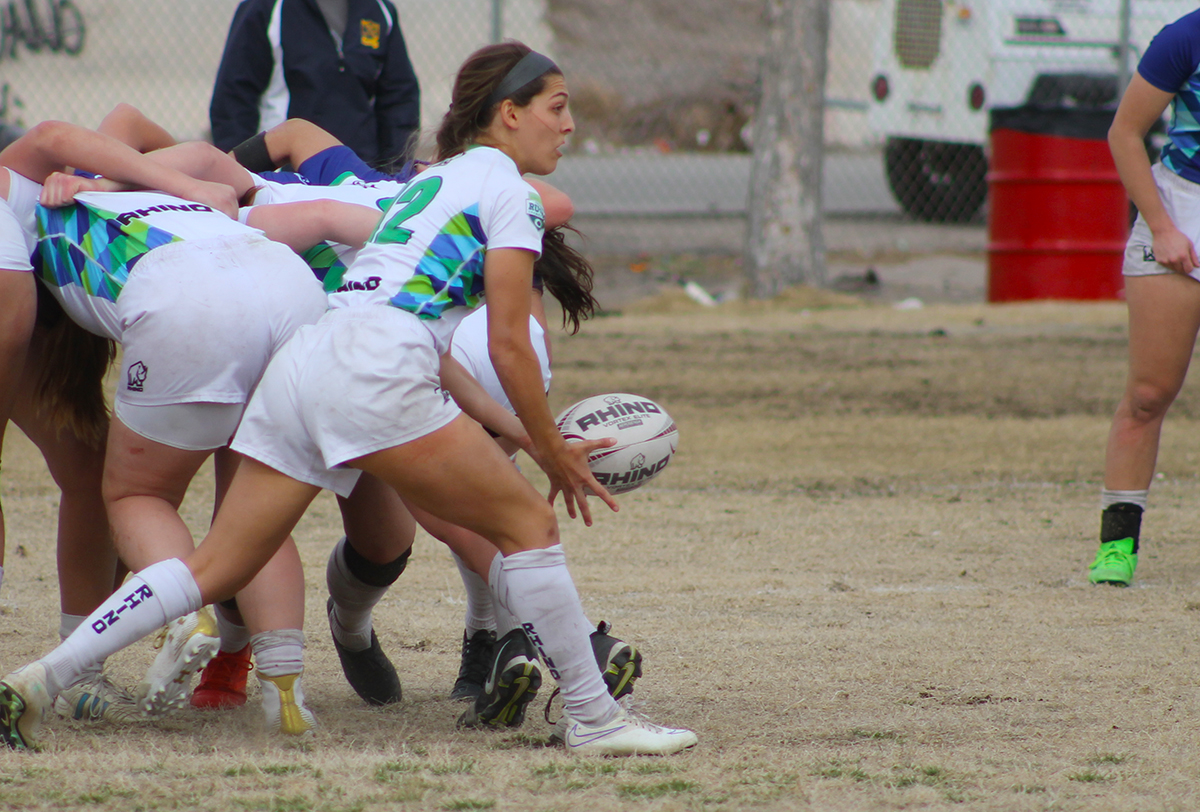 “She’s one of those people who has no idea that she’s a smaller woman and tackles ferociously,” Chivers praised.

Even Brook Hoesing, who was named the captain of the overall squad, was a risk. She hadn’t traveled with NSCRO before, and there were returners who might’ve been a safer choice, but she did an excellent job. Hoesing played with the Blue team, and Emily Grey served as field captain for NSCRO White.

On day one, NSCRO White beat Carolinas Select, Colorado State and Manhattanville 110-0, and NSCRO Blue beat Stony Brook, Denver and Arizona 130-0. On day two, NSCRO White battled to a 10-7 Cup quarterfinal win against Utah Valley, and then 19-12 semifinal win over AIC. NSCRO Blue posted convincing wins against Colorado and Saint Mary’s College for the final’s berth against their teammates. 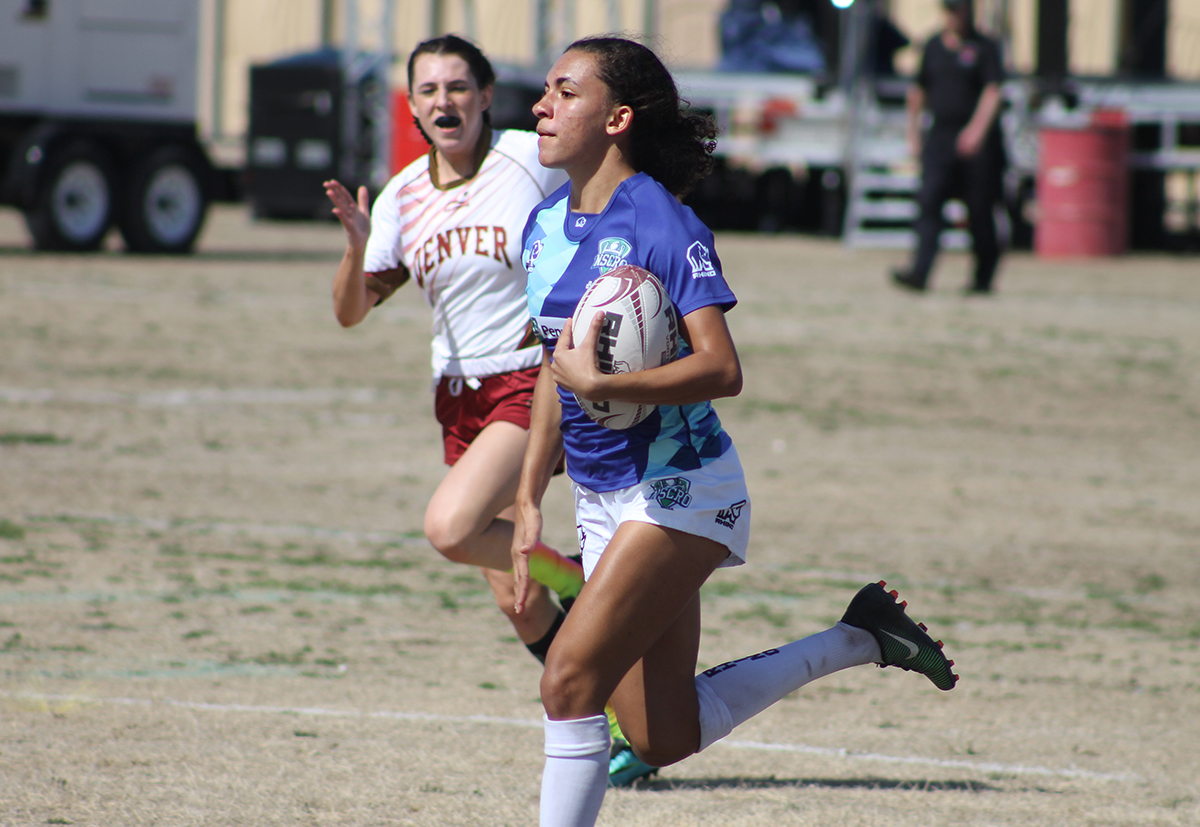 Chivers noted the absence of Canadian teams, which makes a difference in the level of competition. The coach had good things to say about Saint Mary’s College, AIC, Utah Valley and Iowa, and noted the Gaels’ third-place win over the varsity Yellow Jackets. (The third-place game had to be requested, hence its absence from the LVI schedule)

“No single player was a sudden super star. They were all very good players. You would empty the bench and sometimes they’d get stronger,” said Chivers, who did single out Scranton’s Pam Sbarra for an eight-try performance. “The forwards were creative, which was really fun. The NSCRO White forwards were calling plays on the fly and running nice lines. They weren’t boring. Daisy Manoa on the Blue side – she runs hard and launches the ball out when she sees space. Big, creative, strong players.” 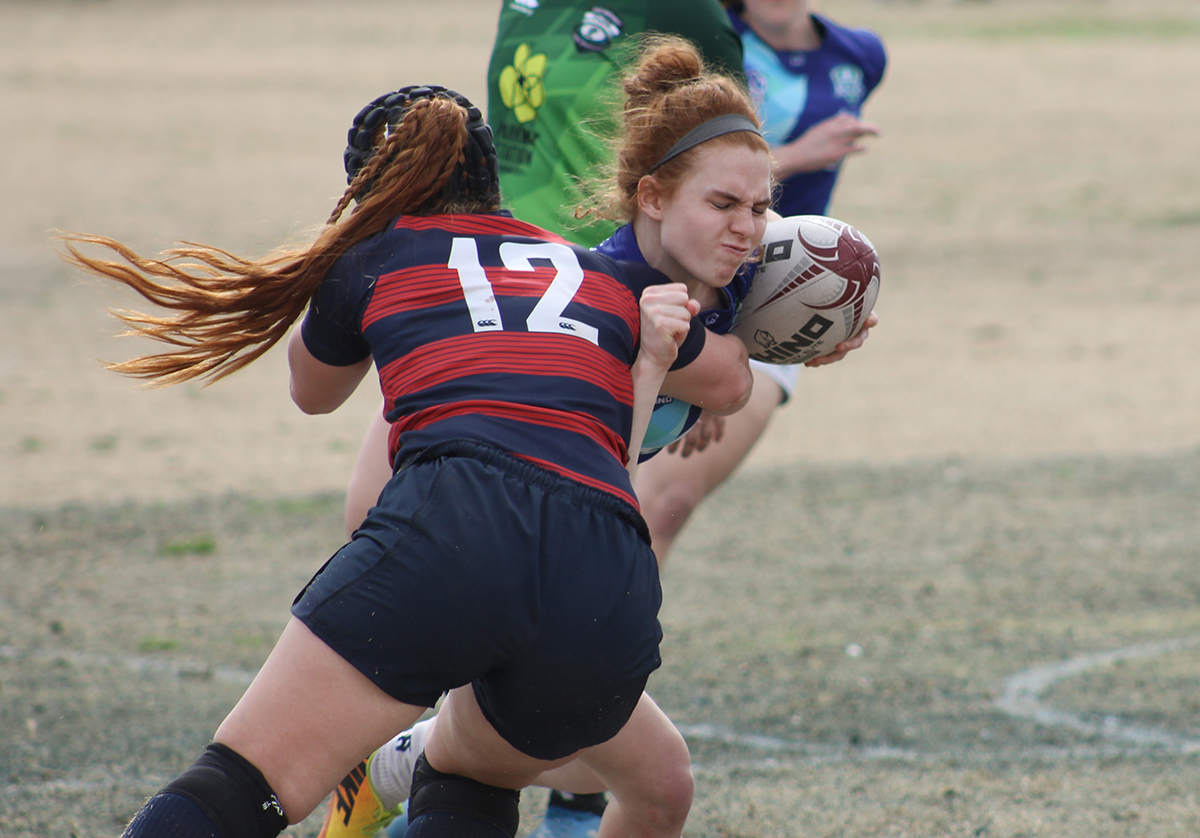 Heading into the final, the players took pictures and walked side by side, always alternating Blue and White jerseys for a visual representation of their mutual support. Paiton Plutchak and Alex Massari scored White’s tries, while Kelly DeGrood and Britni Ebert scored Blue’s tries. Grey kicked the only conversion of the game, thereby sealing NSCRO White’s 12-10 win.

“We’re certainly more visible than we were at our first CRC, when we came in ranked 16th,” Chivers considered the effect of tournament wins. “People used to think it was just a group of players from little schools that don’t seem to be very good, but now they realize there are good athletes at small schools. 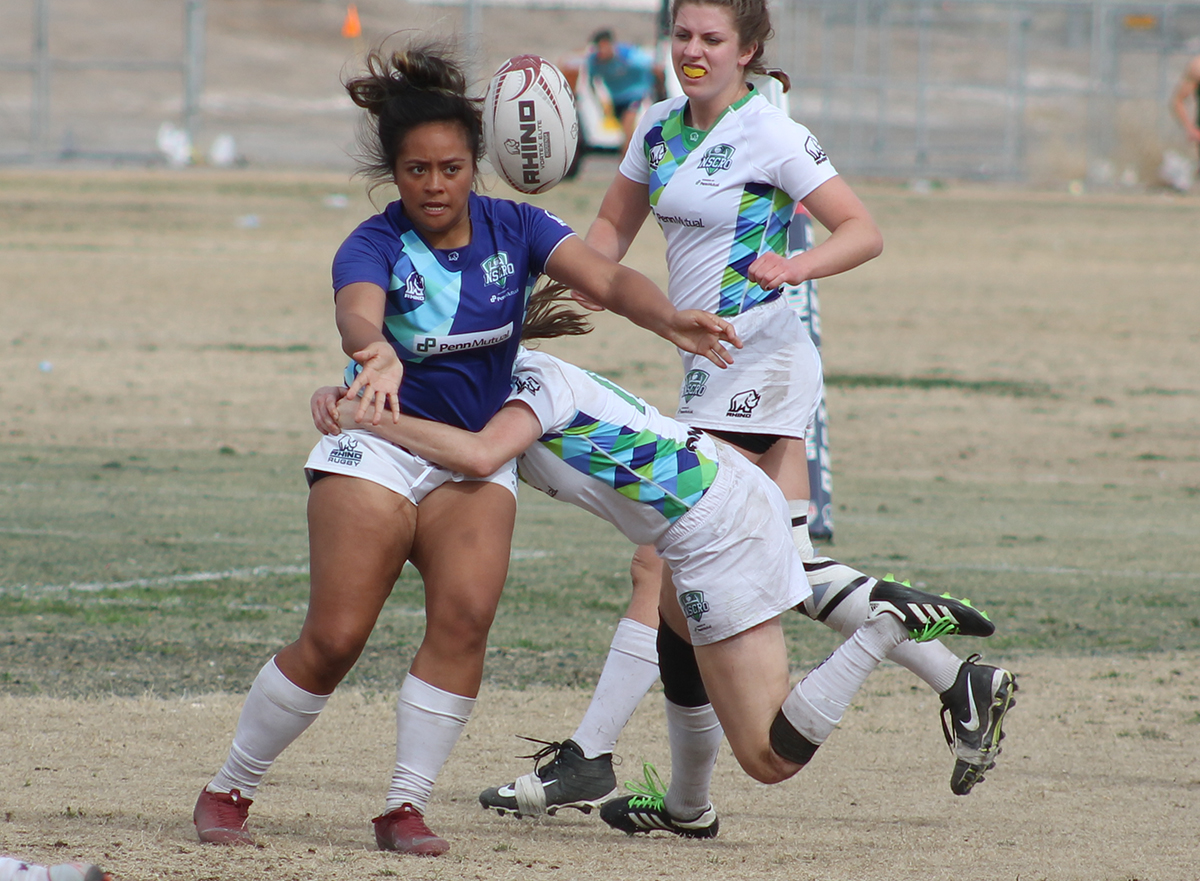 “Visibility, big picture – that’s important. We work really hard to have a very good product that makes NSCRO and Penn Mutual proud of the program,” Chivers continued. “But it’s always really important for us to be able to show that we’re giving back to as many teams as we can.”

The 24 players hail from 16 different schools in 13 states. That’s the result of scouting that will continue at the 7s national championship in April and weigh against those other all-star considerations who were unable to make the Vegas trip. The next big fixture is the CRCs, which has added Army and Queens University to the powerhouse returners Lindenwood, Life and Penn State, among others. 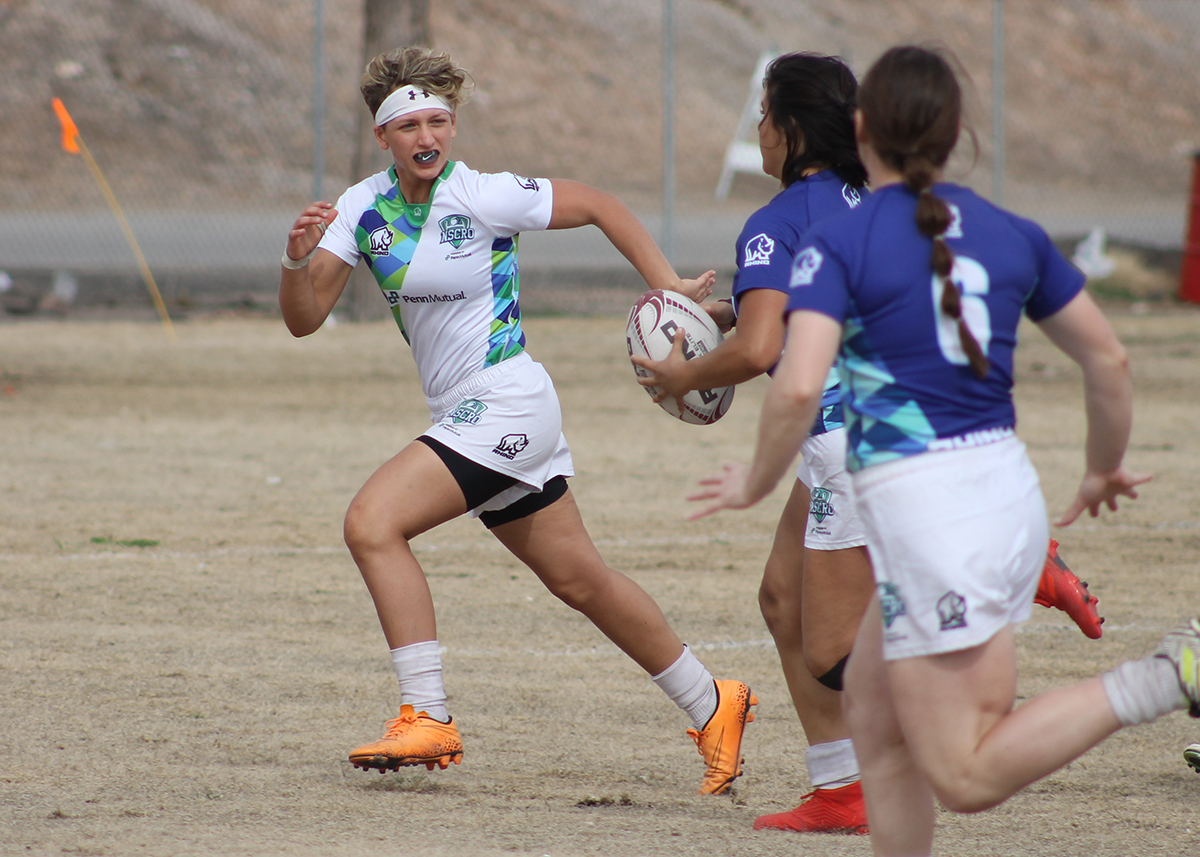 “Last year we were in the [CRC] semifinals and it will be a challenge to get there this year with the introduction of some of those varsity programs,” Chivers said. “To be successful, we had to bring in as many players as we possibly could to see what we have.”

It’s a lot of work, and Chivers reflected on his late friend, Steve Murra, and the conversations they used to have about limits. Murra was devoted to the Midwest Thunderbirds, the only long-standing regional all-star program for women’s college 15s today.

“We used to ask, ‘What are you willing to do as a select side coach?’ Will you turn over every stone to find that player,” Chivers posed. “It’s at the end of a long day, you’re tired, and there’s still laundry to do. Will you do everything to make them feel like a team?” 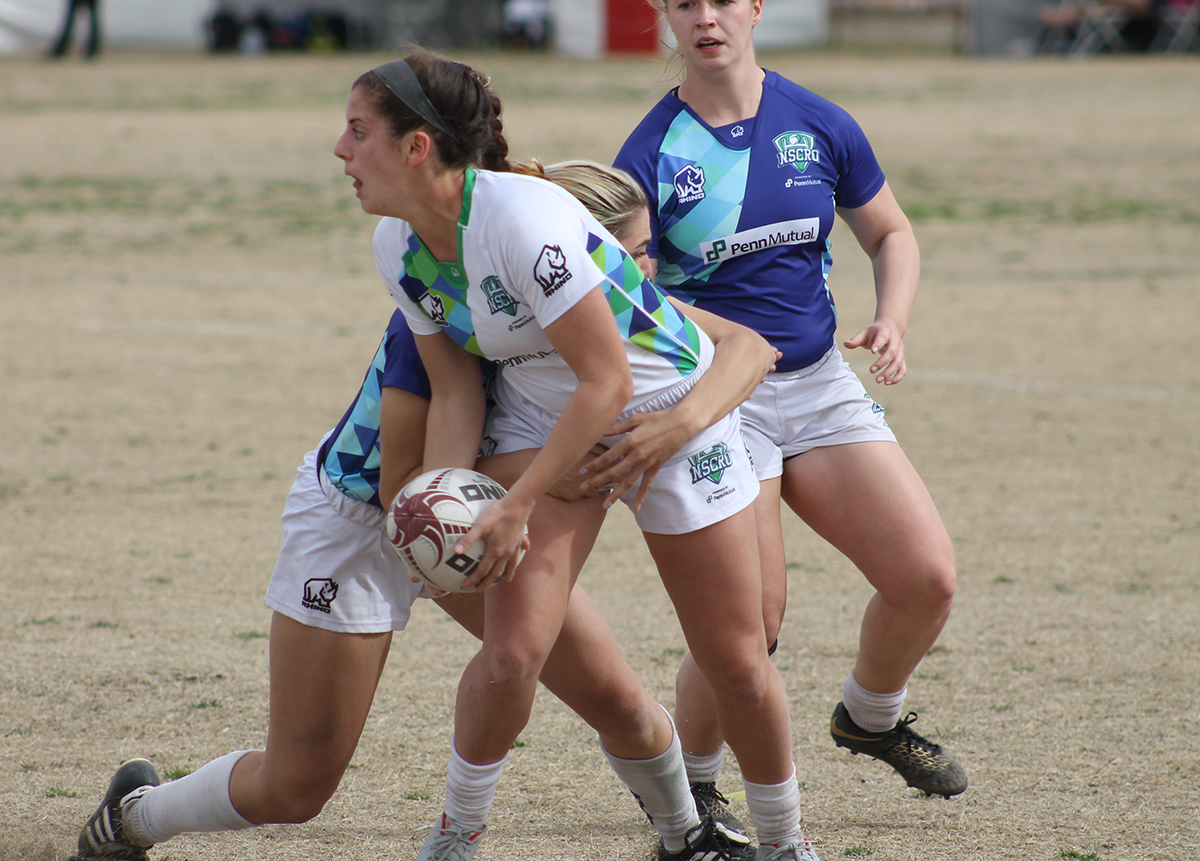