Palmer Gets 2nd Chance at Nationals 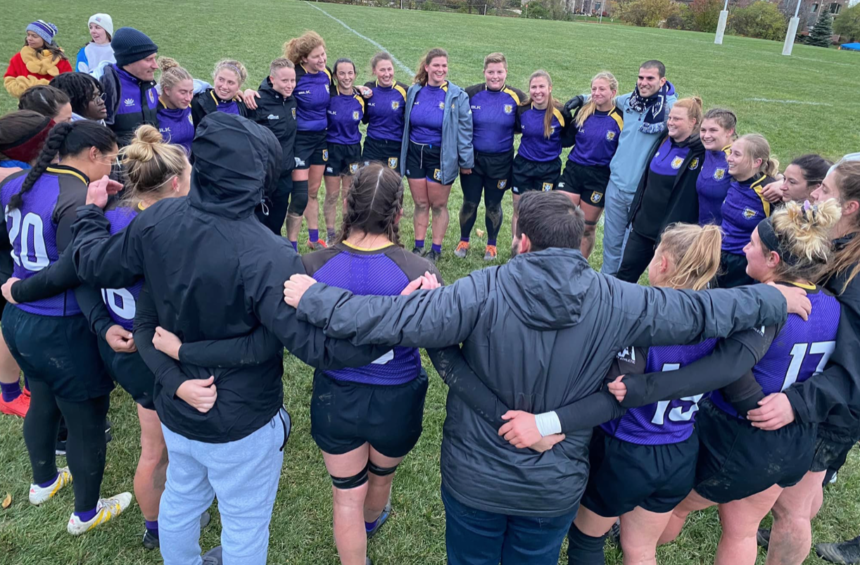 Palmer College returned to play this fall as the reigning Midwest DII champion, but there were many changes to the team that won the 2019 title. That’s the nature of the chiropractic school, which endures constant player and coaching turnover, and obviously Covid-19 exacerbated player movement and the ability to recruit. But the Davenport, Iowa, program made gains each week and culminated with a repeat title and berth to the national playoffs in the spring.

Lauren Lybbert started playing rugby at Army West Point in 2011 and continued at different duty stations when possible, but hadn’t formally competed in the sport for a decade. That changed when Lybbert returned home and enrolled at Palmer College in October 2020. Given Lybbert’s rugby background and expected time at Palmer, Lybbert was elected president in September 2021.

But when Lybbert joined Palmer, the school was still completely online and didn’t return to in-person until last trimester. Fitness-based practices started in December 2020, and that allowed the team to understand its new starting point and obviously get back in shape. Games started in spring 2021, and once the school fully reopened, on-campus recruitment put the roster in the mid-20s. Lybbert estimated that 8-10 players from the 2019 championship team and they’ve been crucial to educating the new crop of players.

“They’re honestly powerhouse players,” Lybbert said of the 2019 Midwest championship returners. “They’re big girls and hard to get down. They are positive at every ruck and hyping us up for every scrum.”

“She is an absolute monster,” she continued. “She does Crossfit competitions all the time and is in great shape, a great tackler, and takes time to teach the new girls how to tackle, ruck, all those things.”

Gianna Bandemer is big in the backs leads in the way of open-field tackling and organizing the back line defense. Taylor Sandin, also, is important to the backs’ performance.

“Our flyhalf took an internship with a VA clinic, so we’ve played around with 10,” Lybbert explained. “Our scrumhalf, Kiara Stone, has been the glue that held the team together. She’s always organizing things and helping the new players.”

The team was also working on a new attack, but the newcomers absorbed all the new information well.

“We were all kind of surprised with our early success, considering all the new players we had,” Lybbert said. “We realized that we might not have a ton of rugby experience, but that cohesiveness would help us, so we were focusing on building team unity and building each other up.

“But it was always in the back of our minds, that we wanted to do well in the playoffs,” the president continued. “Last spring, we played Lindenwood and got destroyed. It woke up our veterans to the fact that we’re not unstoppable. That we can absolutely be beaten by teams. They were still riding that Midwest championship high from 2019, but that game motivated them to refocus.”

Maddie Jumper worked in nicely. The Quinnipiac University grad spent four years in the NCAA DI varsity league and brings a high level of rugby to the forwards. Asia Sockrider has worked into the flanker position well.

“She literally sacrifices her body for anything. She’s super competitive,” Lybbert said. “She does an awesome job at keeping the team hyped up.”

Twins Taylor and Kaitlyn Heyrman joined last trimester and have been starting in the back line most games. Maddie Eager and Cassidy Rourke are also new and they’ve come off the bench with fresh legs and great energy.

On Nov. 6, Palmer and Scylla faced each other for the third time, this time for the berth to the Midwest championship.

“We were challenged most by Scylla this season,” Lybbert said. “We were nervous about the semifinal. We knew they didn’t want to get beat a third time and wanted to win, and they almost did. We had some nerves first half and it took time to work those out. But then we started playing together, like we know how to play. But that was, by far, the hardest game we played all season. They didn’t let us get one inch that we didn’t fight for.”

It was a forward-dominant game, according to Lybbert, and the president called out the hard work of the pack as a difference-maker in the semifinal. Palmer won 19-14.

The Columbus Squirrels won the Eastern Conference, besting North Buffalo 56-7 in the quarterfinals and Detroit 60-5. The two conference victors met in Lemont, Ill., on Nov. 13, and Palmer won 59-15.

“Coming off beating Scylla a third time and knowing that we can come together and do hard things when we have to – that was a confidence boost,” Lybbert said. “We went into that game focused on what we done all season – using our really powerful forwards, pushing our pods and moving the ball forward. That worked well for us all year. The back line is really coming together and gaining confidence. When we could, we got it out to them and let them run. We just focused on our system because we didn’t know anything about them anyway.”

Palmer College scored three tries pretty early in the first half but then got in penalty trouble. The Dragons incurred two yellow cards and were playing with 13 players for a bit.

“They scored two tries in that time,” Lybbert said. “That got everyone a little anxious. We just tried to calm everyone down on field, and talked about shifting on defense. Columbus was a lot faster than us, so they would try to get the ball to their back line, and they got us around the corner a couple times. But overall that was our best defensive game all year. We worked on it the week prior and it started clicking for us.”

“It wasn’t unexpected. We just didn’t know what to expect this season, both from us and other teams being off from Covid,” Lybbert said. “We had a lot of support from girls from the 2019 team that left. They were always motivating us and it was helpful to have them there as back-up when we had questions. Palmer Rugby as a whole is just a big family environment. I can’t imagine winning Midwests and not being able to go to nationals, and I’m know people are still stinging from that. It’s nice to carry on what they started. It makes it feel like they didn’t do that work in vein and we’re at that level. Feels like nice to carry that on.”

Palmer College has sealed its spot at nationals, which occur in the spring. The team will have some key players graduate and/or take internships in the final trimesters at Palmer. But there is a long run-up to the post-season and Lybbert is confident that the pieces are there for a good nationals showing.