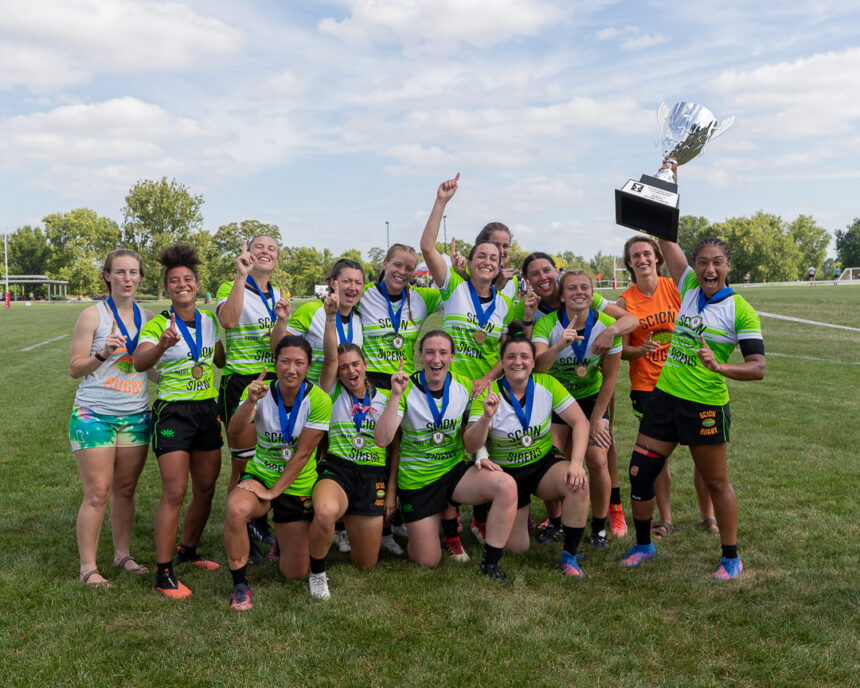 About half of the team returned from the 2021 championship squad, and they all played important roles. 2021 MVP Jade McGrath as well as influential playmaker Lauren Rhode were super influential in the middle of the pitch with lots of touches on the ball, and Rhode aptly took over the main kicking role that Kimber Rozier filled in 2021. Jess Lu, Camille Johnson, Emily Fulbrook and Katie Lutton are all veterans, can finish, and push Scion’s brand of punishing rugby. 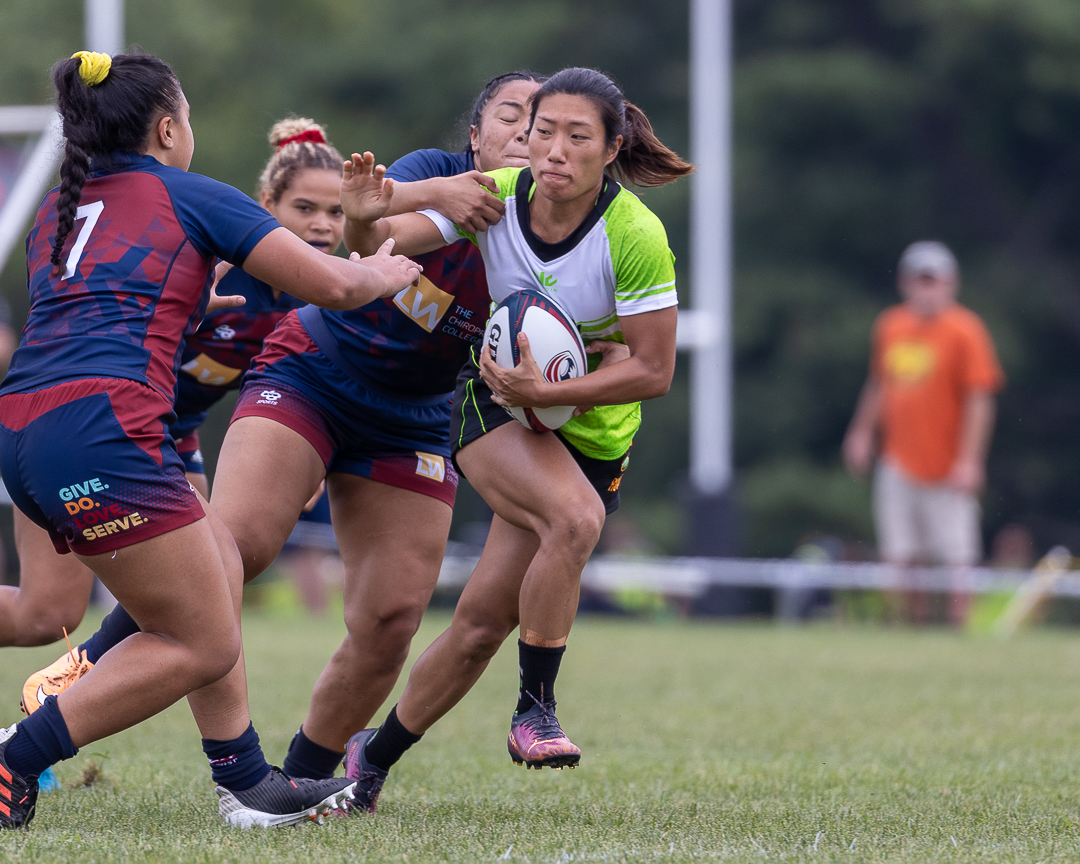 But the new faces brought a lot of verve, including Abby Gustaitis and Monique Coffey. Gustaitis of course is not new Scion but took a long hiatus while representing Team USA. International Coffey drew lots of attention during the Premier Rugby 7s season and was one of the most dangerous ballcarriers to put into space. Autumn Czaplicki also stood out and has had a knockout summer between the USA U23s, PR 7s and now 7s nationals. 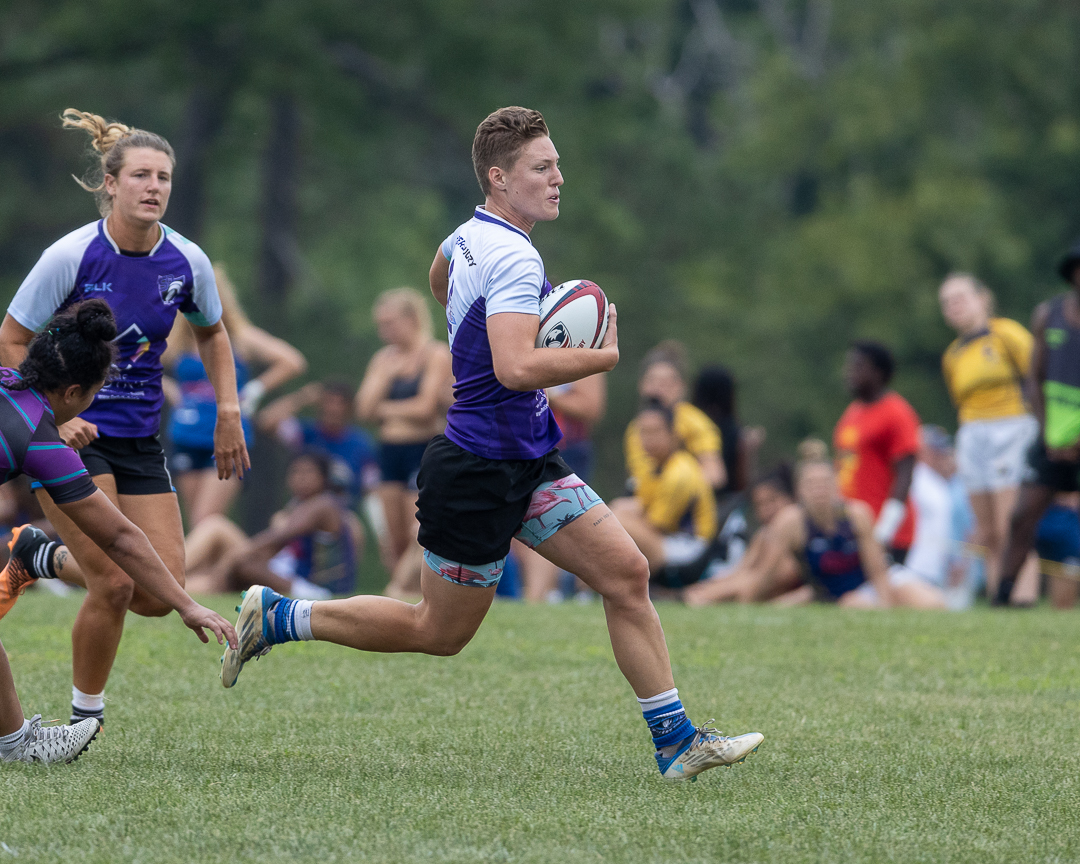 Scion looked good from the get-go. The team won Pool A 159-0, and its defense was insatiable. The Mid-Atlantic squad then started day two with a 50-0 win against Life West in the Cup quarterfinals, before getting a very good push from San Diego in the Cup semifinals. Coached by former USA Women’s 7s head coach and current PR 7s scout Richie Walker, the Surfers advanced to the final four after defeating Rocky Mountain 34-0. Lauren Thunen really led from the middle of the pitch and Ashley Torrecillas proved an excellent finisher. Against Scion, San Diego attempted to shut down the attack before the ball reached the edges, but Scion was resilient and moved the ball in and around contact. Coffey was too tough to contain with even just a step’s worth of space outside: 28-12 the final. 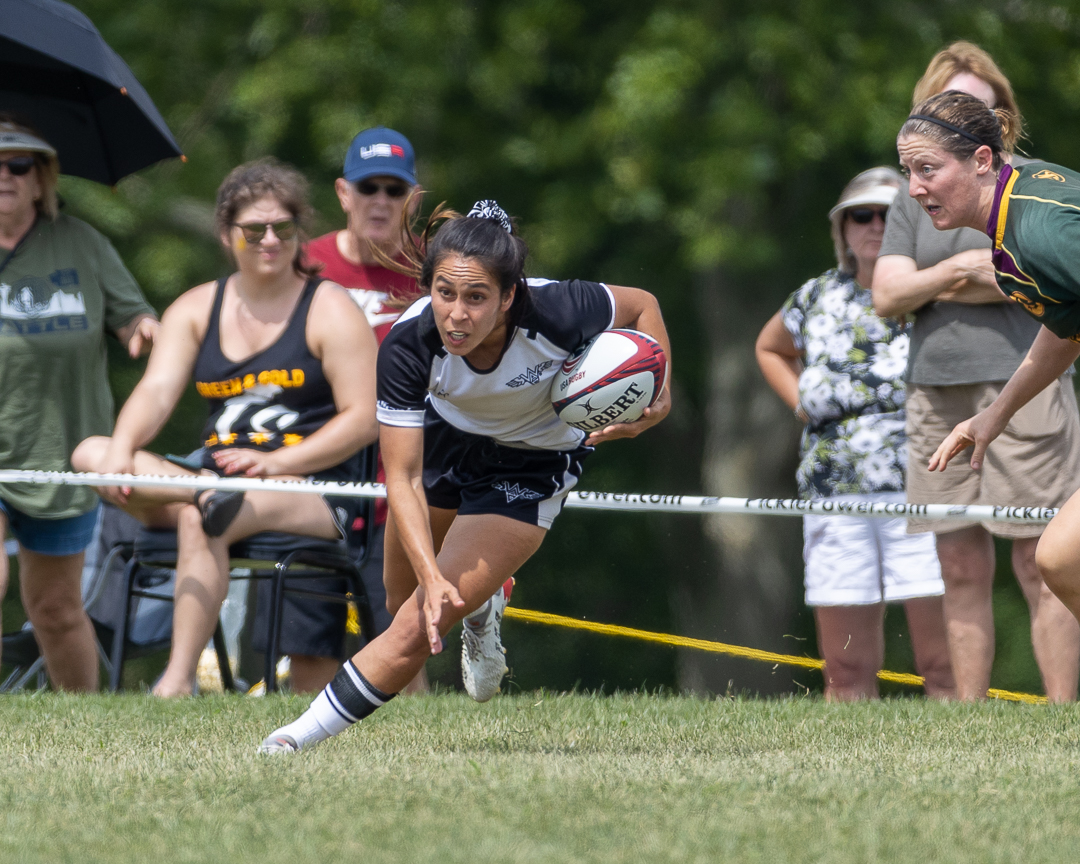 On the other side of the bracket, WAC won its Cup quarterfinal 31-5 against Phoenix, and then squared up against Chicago North Shore, which had defeated crosstown rival Chicago Lions 12-7 to start Sunday’s knockouts. Led by Megan Sanders and Nikki Kenyon, and with the devastating breakaway speed of Erica Legaspi threatening out wide, WAC won its Cup semifinal 29-0 to advance to its first-ever club 7s national final. [Seattle-based teams have competed in the championship before: In 2012, San Diego beat Seattle in the final, and in 2017, Seattle Atavus beat the Surfers for the championship.] San Diego went on to defeat Chicago North Shore 38-7 to finish 3rd, but the 4th-place finish was by far the highest standing that North Shore has ever achieved at nationals. 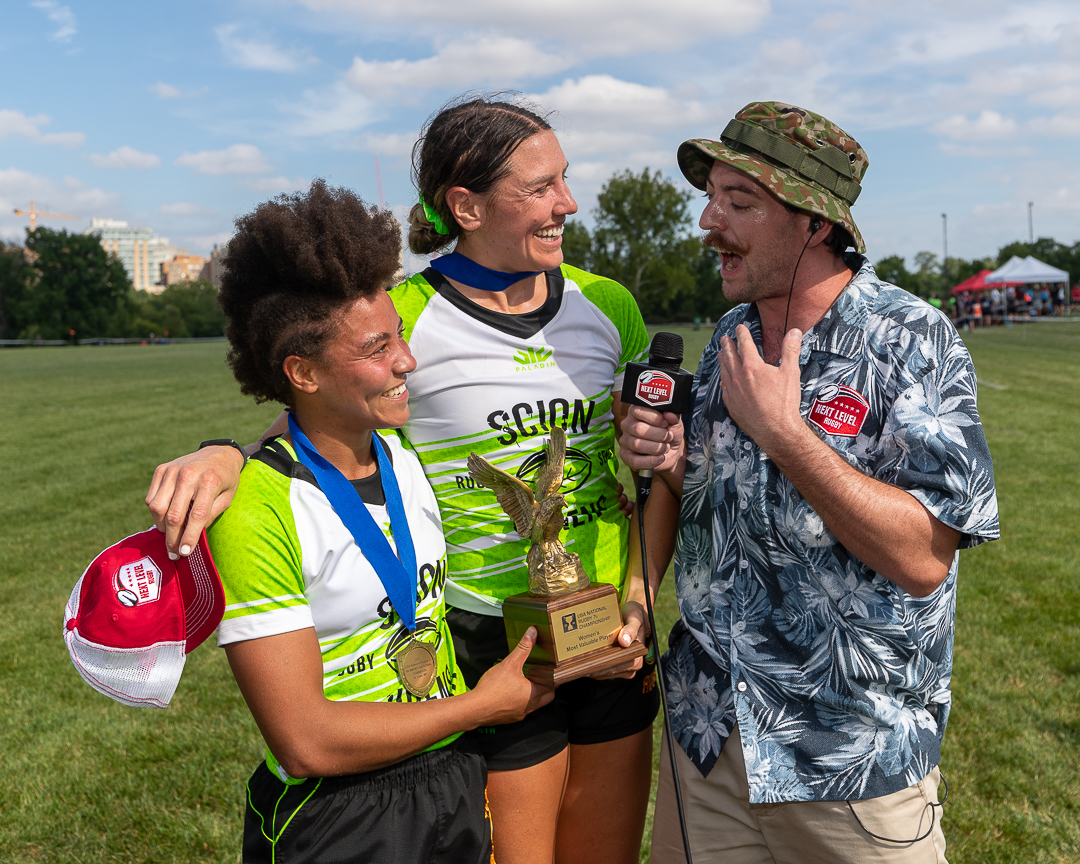 WAC started the final well, but a not-releasing penalty on its 40 meter saw Scion’s Jess Lu go quickly and dummy past the defense for the centered try, 7-0. But the Seattle team was up for the chase and a couple of missed tackles set up Legaspi for some sideline fends and long-range try, 7-all. WAC did well to break up an attempted offload from Gustaitis but Czaplicki was there for the tackle and poach to put the ball back in the Olympian’s hands for the try: 12-7 to Scion into the break.

The second half belonged to Scion. WAC was able to hang defensively for a few phases but as soon as the ball was able to ship wide, Coffey was able to create separation and scored two tries. Camille Johnson also added a try while Rhode kicked the extras in the 29-7 final. 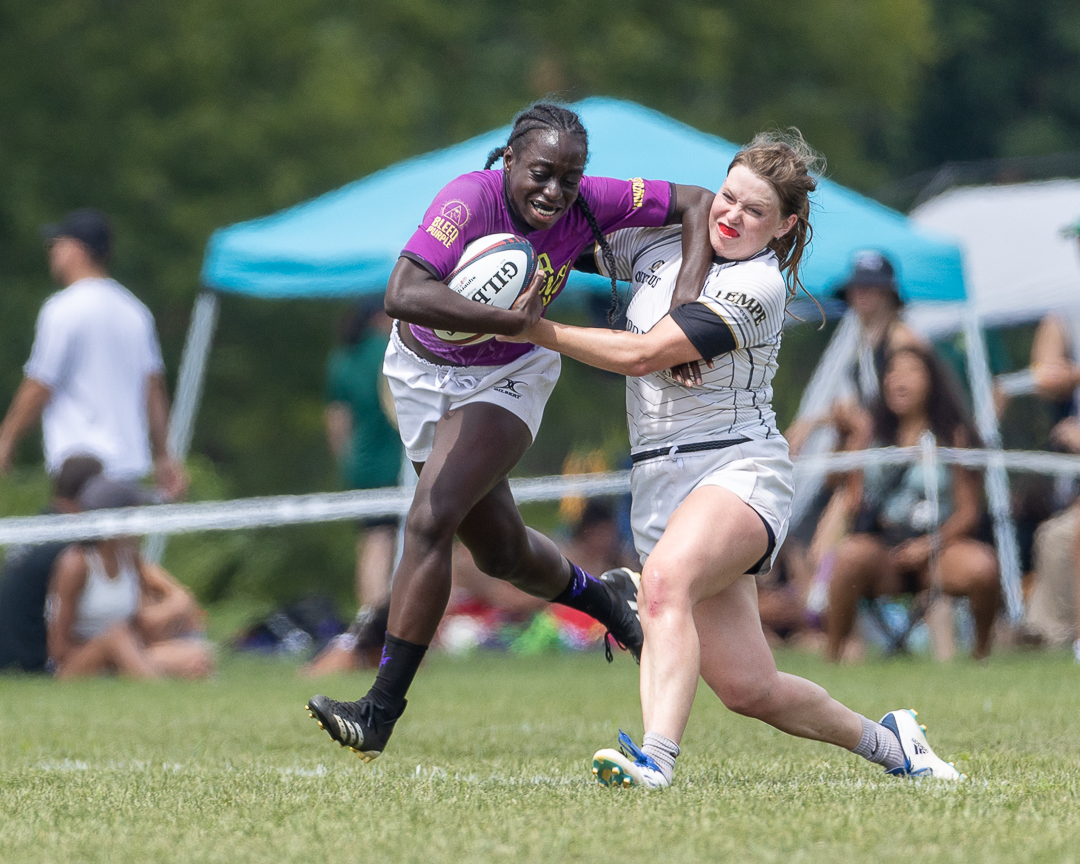 This year’s title is Scion’s third-ever trophy, having won the 2021 and 2016 tournaments. San Diego leads the record books with four national titles.

Across the rest of the field, Life West won the Plate with a 22-14 win against the Chicago Lions. Rocky Mountain took 7th with a 29-19 win against Phoenix. Boston won the Bowl after a 20-5 win against Boston, and Berkeley ended the tournament with a 17-0 win against the D.C. Furies for the Shield. Click here for full results.