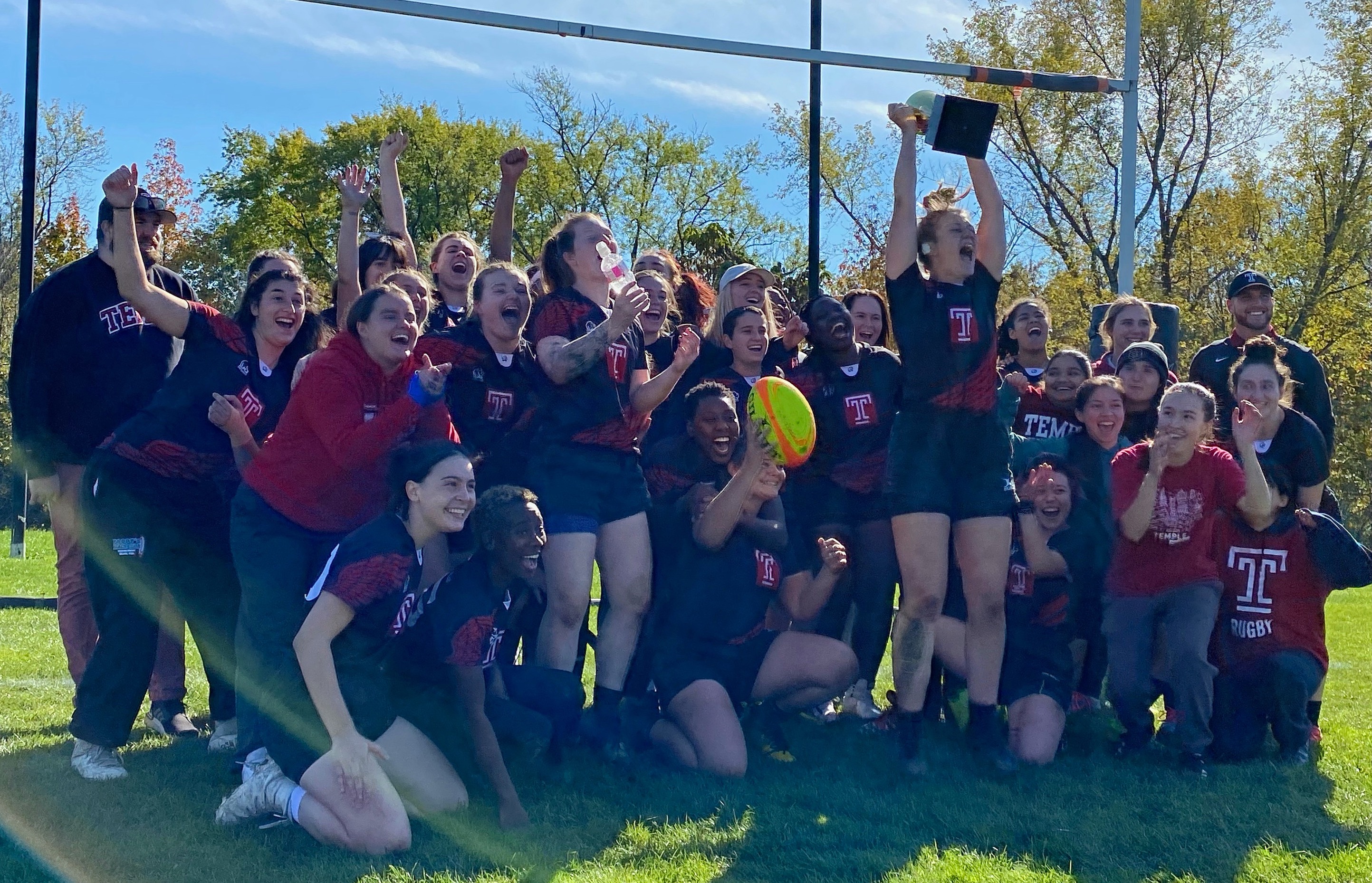 The American Collegiate Rugby Association (ACRA) hosts its Round of 8/4 this weekend, and all eight teams are reporting to Poughkeepsie, N.Y. The quarterfinalists arrive through a variety of means – from recognizable regular- and post-seasons like that of Tri-State, to more flexible pathways that were influenced by the pandemic. The Mid-Atlantic Rugby Conference (MARC) found itself in the latter scenario, but champion Temple University is eager to show that it is objectively good.

During the pandemic school year, Temple players stayed in contact virtually and checked in on each other. When socially distanced practices were approved, the team focused on foundational skills and fitness, but no contact.

“From a coaching standpoint, our whole staff was very worried,” said Temple head coach Josh Pedrow, an alum who’s been involved with the men’s and women’s teams for four years now. “In all honesty we thought this would be a rebuilding year. But our e-board did a really good job of getting out there and recruiting a whole bunch of girls. That saved us and we have something like 32 players on the roster now.” 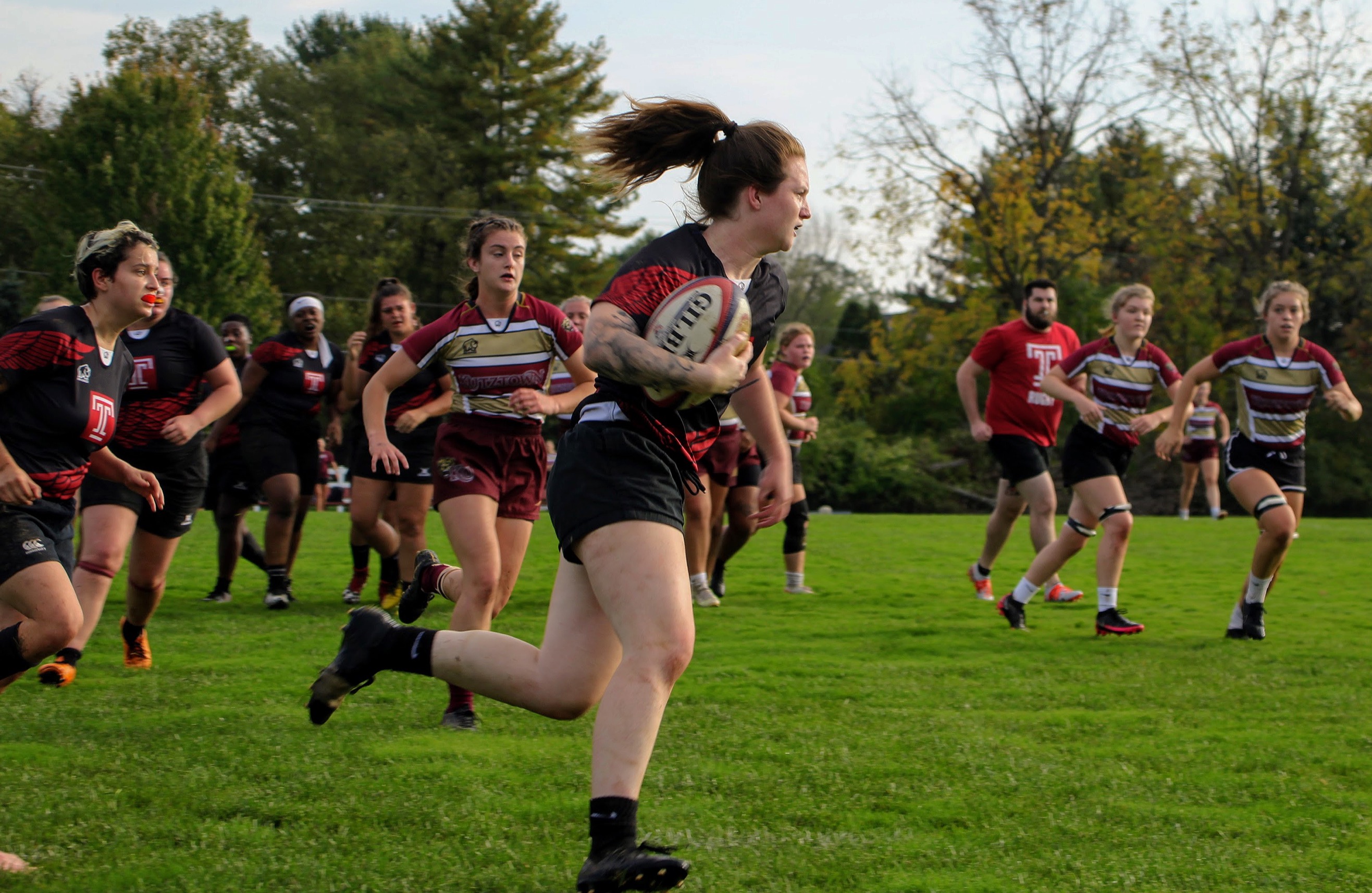 President Emily Lesher was instrumental in driving that on-campus recruitment as well as fielding inquiries from incoming freshmen like Doylestown grad Ellie Miller. Lesher started playing in fall 2019 and thus has one other season of experience behind her. Same goes for backs captain Pippa Barrett, although the strong-side wing has British parents and thus an upbringing in the game.

“From my perspective on helping the newcomers learn to play rugby, it was very similar to when Emily and I joined,” Barratt addressed the proportion of veterans to rookies. “It took about the same amount of time, if not less, to get prepared and for everyone to have the basic understanding of the sport.”

“Two weeks in, we noticed that – for whatever reason – the new girls were picking it up way faster than any previous year,” the coach said. “We had a lot of girls, though they had no previous rugby experience, who were showing a lot more potential than we thought we’d have this year – we saw it in simple things, like contact drills or passing.”

As Temple’s outlook was looking stronger than anticipated, few conference mates were enjoying the same fortune. 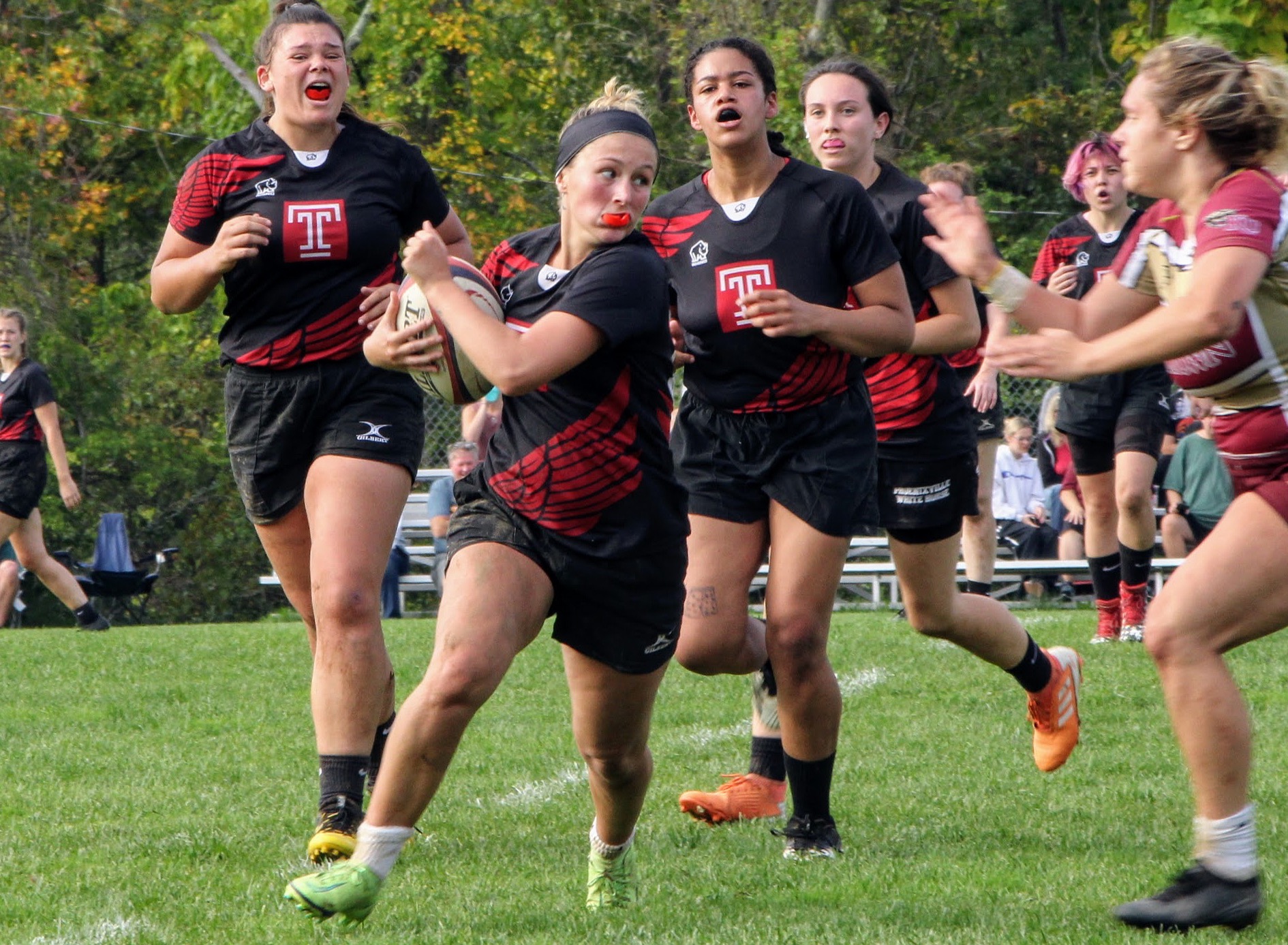 “MARC was the only conference in all of ACRA that struggled to have games,” said Pedrow, who also serves as ACRA’s eligibility officer. “As far as official league games, we had one. The rest were scrimmages because the rest of the teams couldn’t field a squad. We were taking any game we could to get experience and be ready for playoffs. The players took the most of those opportunities, but it was rough getting games.”

MARC North was in better shape, with teams like Kutztown, Bloomsburg, The College of New Jersey (TCNJ) and St. Joe’s putting games together. In the South, Temple only had Delaware as a viable opponent. When the Owls were on the pitch, they worked on a balanced game, one that dispersed the responsibilities more evenly than previous years.

“Typically we’ve been a very forward-heavy squad, and our pack is more experienced this year,” Pedrow said. “We’ve had a lot of young backs come in but we’re trying to play a more even game. And then we’re just going to tire you out. That was one of the things we worked on from the start – a focus on cardio, because there’s only so much you can do in those Covid practices. We’ve put ourselves in the position where we’re not going to get tired that last 20 minutes. That’s where we’re going to pull away. And then it’s just having our team ready defensively – that’s our strong point.” 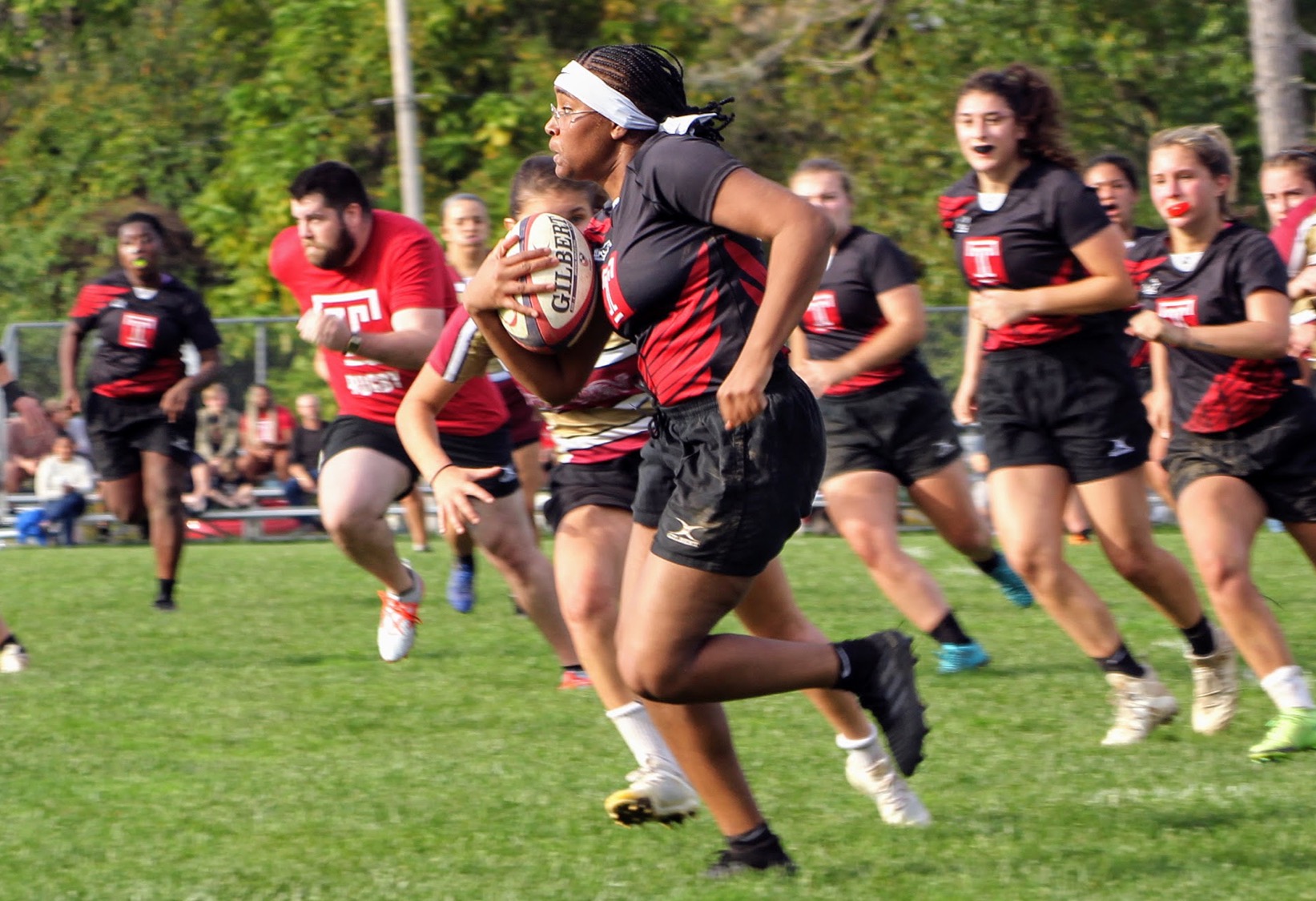 “We have really strong players in the tight five,” Lesher added. “[Prop] Katey Rogers is a really strong leader in our forward pack. Miranda Kenny, our eightman, knows how to command the field and makes sure everyone knows where they need to be so we have an effective defensive line.”

Lesher is the hooker and so she’s the voice in the scrums and lineouts.

Every single one of our backs is very important,” Barratt said. “Our number 10, Erin Phelan, she’s amazing. Really good at communicating what she wants to see happen on the field. … I’m the backs captain and I feel like a lot of new girls look up to me. I’m a wing so I see the field a lot and I tell them exactly what I want them to do, and most of the time they listen. I think the whole team vibes really well together and our game flows beautifully.”

Lesher and Barratt reiterated that there are no super stars, per se, that decide the fate of the game, and that focus on the collective is emblematic of the team’s culture and game style.

Temple took the South’s berth to the MARC final, while Kutztown emerged as the clear leader in the North. The duo met for the MARC championship on Nov. 6, while TCNJ and Delaware duked out third. 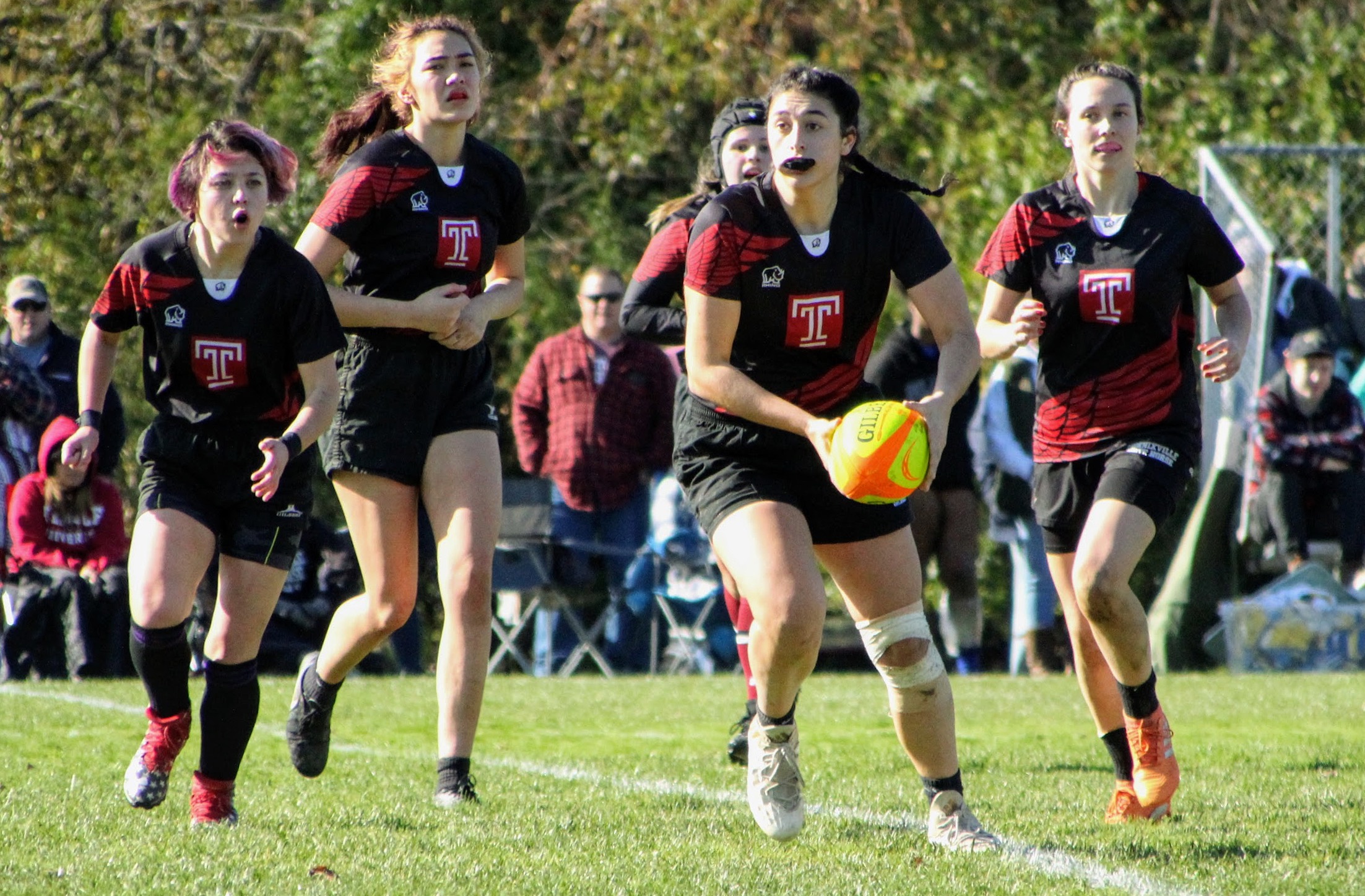 “We had scrimmaged them earlier in the fall and won by a try with two minutes left, so we knew that was going to be a close game,” Pedrow said of expectations for the MARC championship. “[In that scrimmage], we were hanging with them from early on, where in previous years they had our number and really put a beating on us. From that game on, we started building that confidence and hoped to continue that on.”

Temple won the MARC championship 29-12 and earned an automatic berth to the ACRA quarterfinals as a result.

“This isn’t some fluke-y year,” Pedrow said of the game’s impact. “We didn’t play a lot of game but we’re putting up numbers and we’re handling teams that we’ve typically struggled against.” 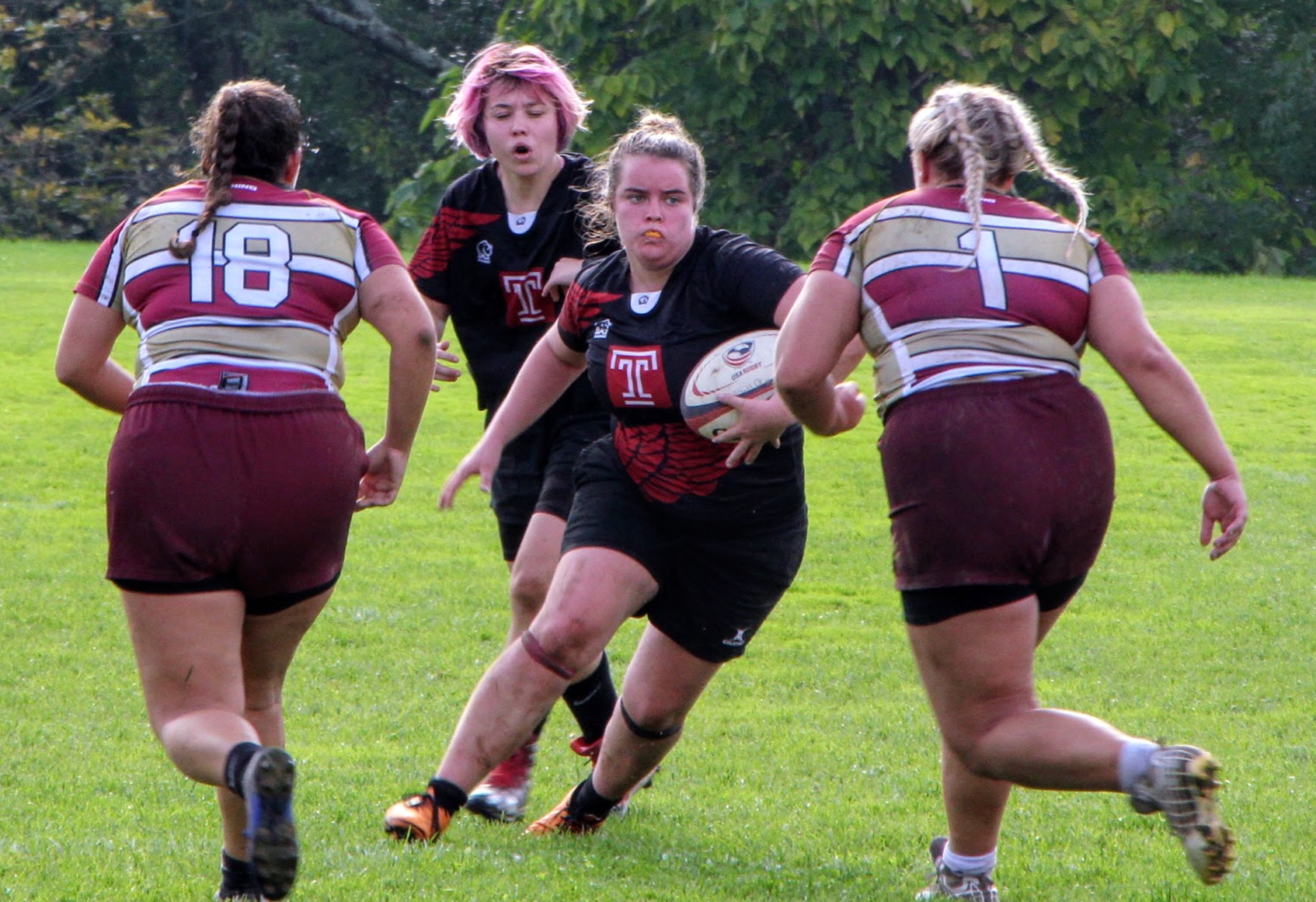 In Saturday’s quarterfinals, Temple will face Colorado Mesa University from the Rocky Mountain conference, a CRAA-aligned league and the only competition not based in the East. There is zero history between the two programs, and that’s fine. It allows Temple to focus on its
game, and Pedrow is emphasizing composure and patience – especially when in scoring position.

“We went [to USA Rugby regionals] the last season before Covid,” Pedrow said of fall 2019, when Temple finished second in MARC. “Expectations that year was we were going to participate. This year, we’re going looking to get wins. We not just going to have an experience at nationals this year.

“Yeah, it’s landing,” the coach said of the new players’ grasp of the stakes. “From the start, we stressed that rugby is a family, not just teammates. So they’ve picked up what this means to the returning players and the staff. Even though I played 6-7 years, I never got close to this – and they’re seeing that kind of stuff. This could be a once-in-a-lifetime experience, getting a chance to go and play at nationals.”