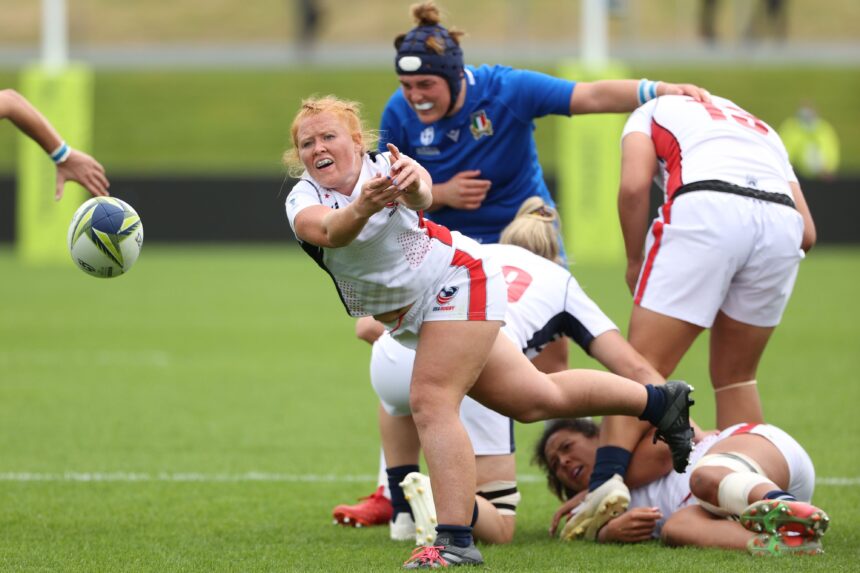 The USA Women’s National Team (WNT) has started its Rugby World Cup 2021 campaign with a 22-10 loss to Italy. The Eagles scored first and dominated the first 20 minutes, but the Azzurre adjusted a few key pieces and, most importantly, was more effective inside the opposition 22. [Lead photo: Fiona Goodall – World Rugby/World Rugby via Getty Images]

USA captain Kate Zackary indicated that the team wanted to come out “guns blazing” in the opening quarter, and the Eagles did just that. After a deep kickoff from Alev Kelter, the USA scooped up a loose ball and sent forwards punching toward the line. Lock Hallie Taufoou dove through a seam four minutes in, and the Eagles took a quick 5-0 lead. 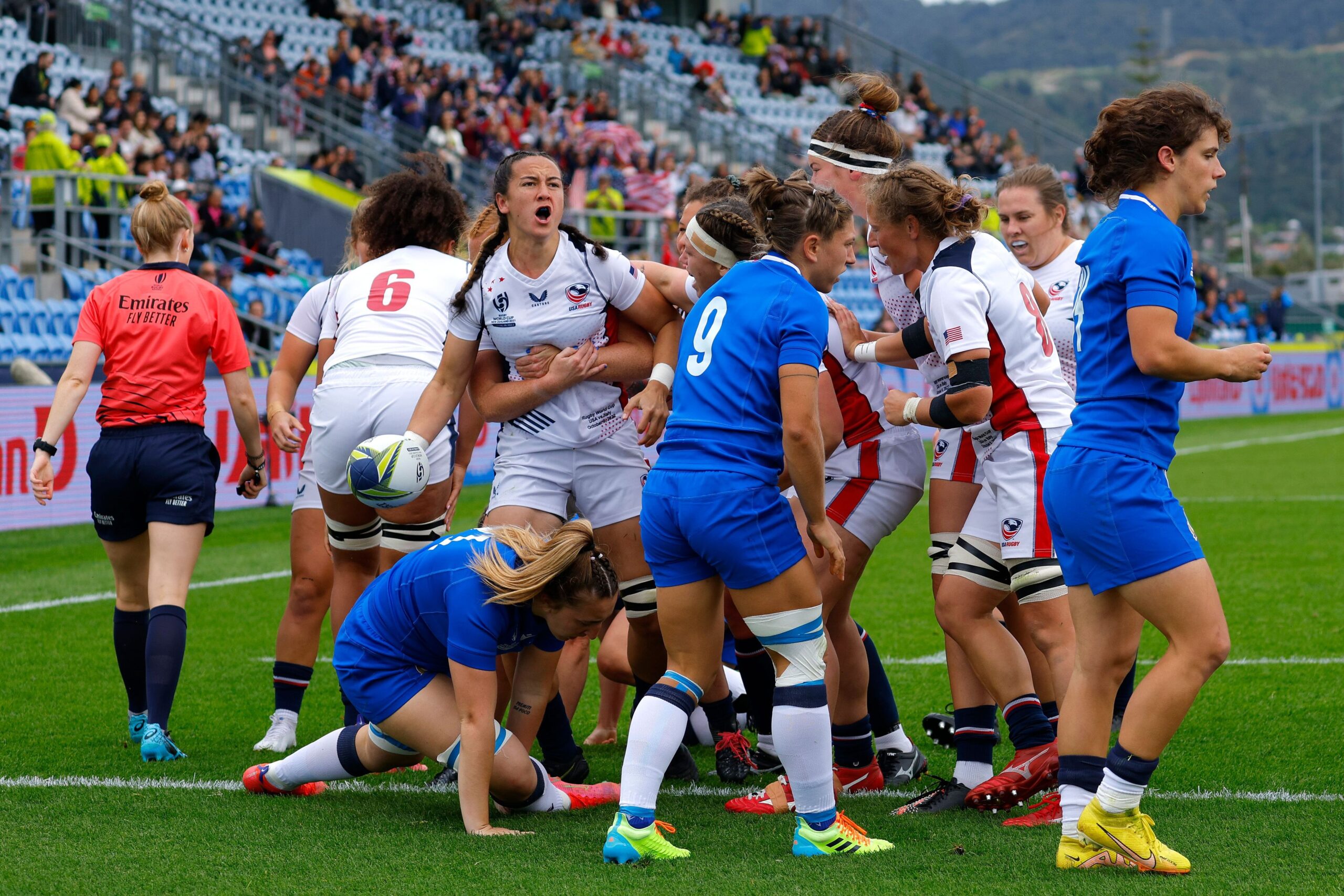 The Eagles dictated the possession, territory and most notably scrums, drawing multiple penalties from the set piece. The USA built pressure through its phases, and while the Italian defense was ready to battle, the Americans hurt themselves with unforced errors, turnovers in the breakdown and errant lineouts.

“That was disappointing,” USA WNT head coach Rob Cain said of the lineouts’ efficacy. “And I think everyone could see that. And from there we really struggled to get any momentum, which is difficult when your set piece isn’t functioning. Really that first 30 minutes, we were very dominant and didn’t come away with enough points and that was really where the game was lost today.”

Italy was also letting itself down at crucial moments. During two forays into U.S. territory, forward passes halted play, but it was a preview of what was building. Once those timing issues sorted, the Azzurre would launch a connecting attack that seemed to run downhill.

Along with the timing, Italy suddenly fixed and fortified its scrum. With that key piece in play, the energy of the game started to shift with approximately 15 minutes left in the half. And then right before the break, a pop pass before contact put Italy into the USA 22, where scrumhalf Carly Waters made the big tackle. There’s was a bit of a scramble around the loose ball but Italy recovered well as the support flooded to the right for the overload. A skip pass to Vittoria Ostuni Minuzzi put the wing into the corner. Just off the sideline, Michela Sillari nailed the tough conversion for the 7-5 lead into the break. Momentum claimed. 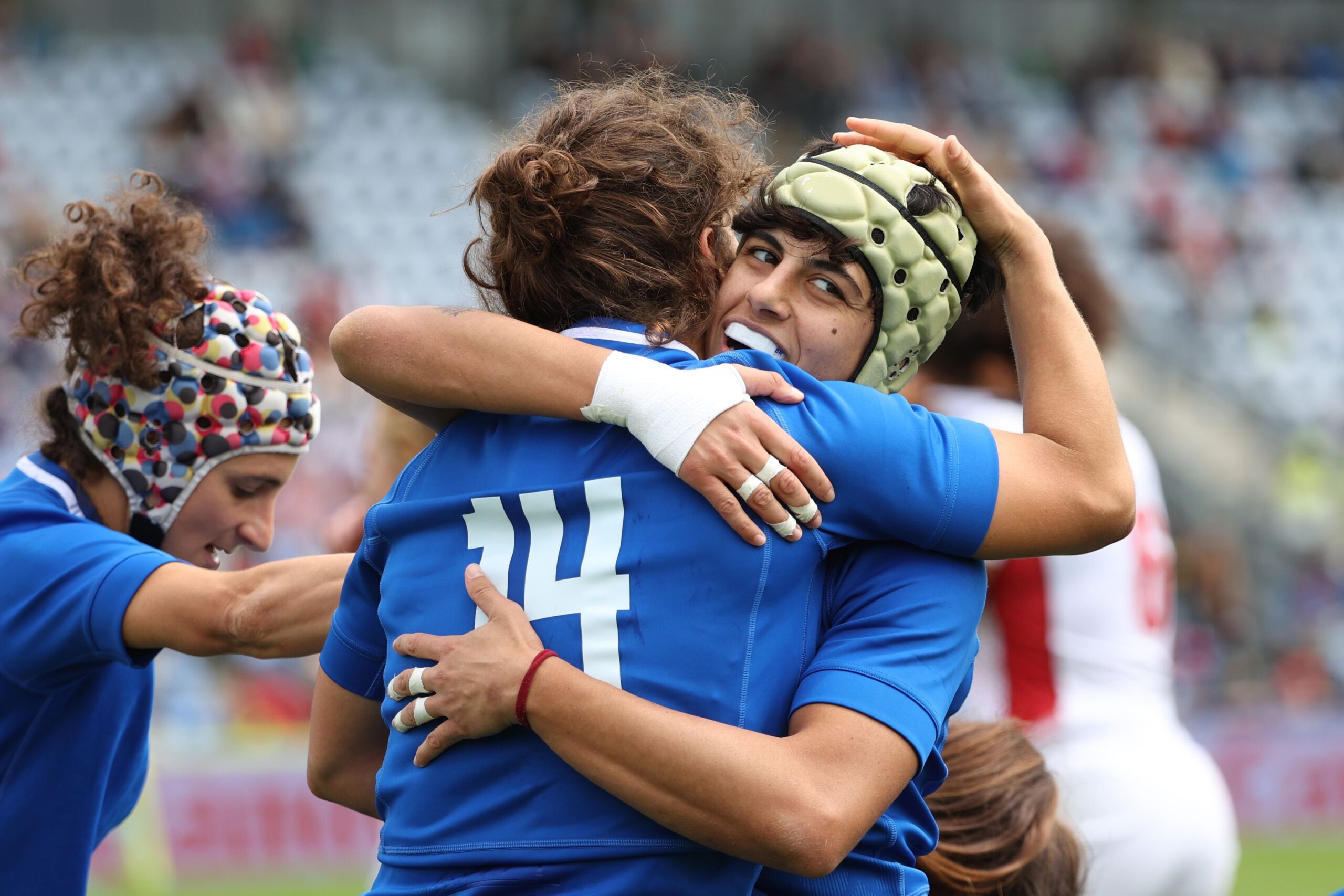 “We were under pressure in the first half,” Italy center Sillari said of halftime adjustments, “so we needed to slow down, think about what we have to do and then we do it.”

The second half got off to a tough start for the Eagles, as errant passes and a poach kept the game in the wrong area of the pitch. The Italian defense was also working well, forcing the Americans into a lateral pattern. The Eagles have their line-piercers, like Kelter and Eti Haungatau, who is the perfect balance of power and finesse, and the center did plant some highlight reel-worthy hits on the defense. But the support wasn’t necessarily offering good options off these defense-jarring moments, and desperate offloads or ballcarriers held up in the tackle followed.

After 10 minutes, Italy built off a Sara Tounesi line-break and then inside center Beatrice Rigoni sent a perfect skip pass past two teammates to Aura Muzzo running on. The wing’s try extended Italy’s lead to 12-5.

The USA then found some flow, and Minuzzi folded under the pressure, batting down a USA pass inside Italy’s 10 meter. A yellow card followed and the Eagles immediately sent the ball. After a few punches at the line, Jordan Matyas took the goal-line hit and popped the ball off her hip to Jenny Kronish. The lock dove over the line, just a couple meters off the post for the try. The conversion was no good: 12-10 to Italy. 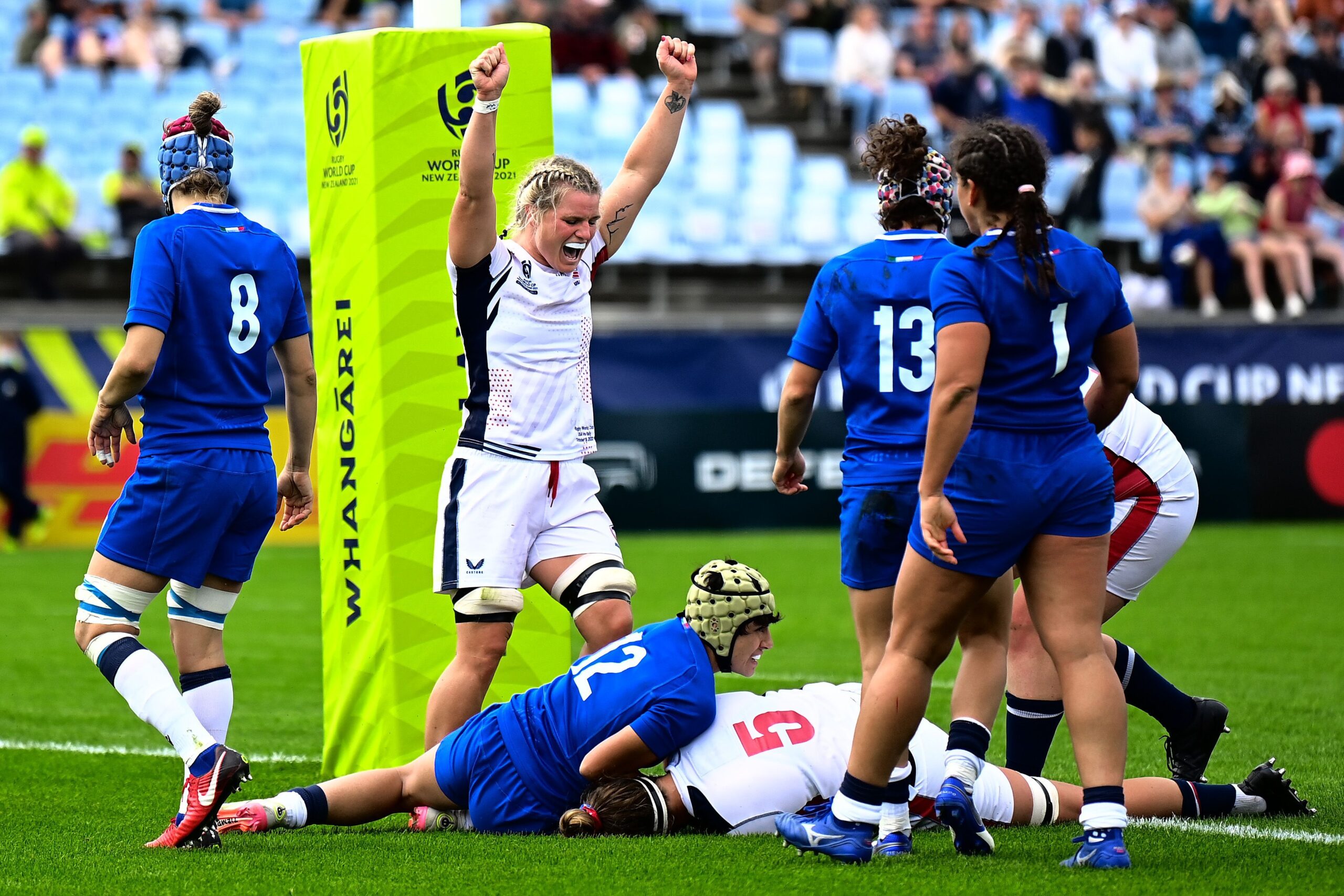 Italy still had 14 players on the pitch when Muzzo scored a second try. MVP Giada Franco busted through the line and again Rigoni sent a long skip pass to the wing, who had to beat three defenders before dotting down: 17-10.

There was still plenty of game to play but then an Italy try at the 70-minute mark put the chase out of reach for the U.S. Azzurre flyhalf Veronica Madia took a hard line off the lineout and then fed wing Maria Magatti back inside for the lane to the try zone: 22-10. 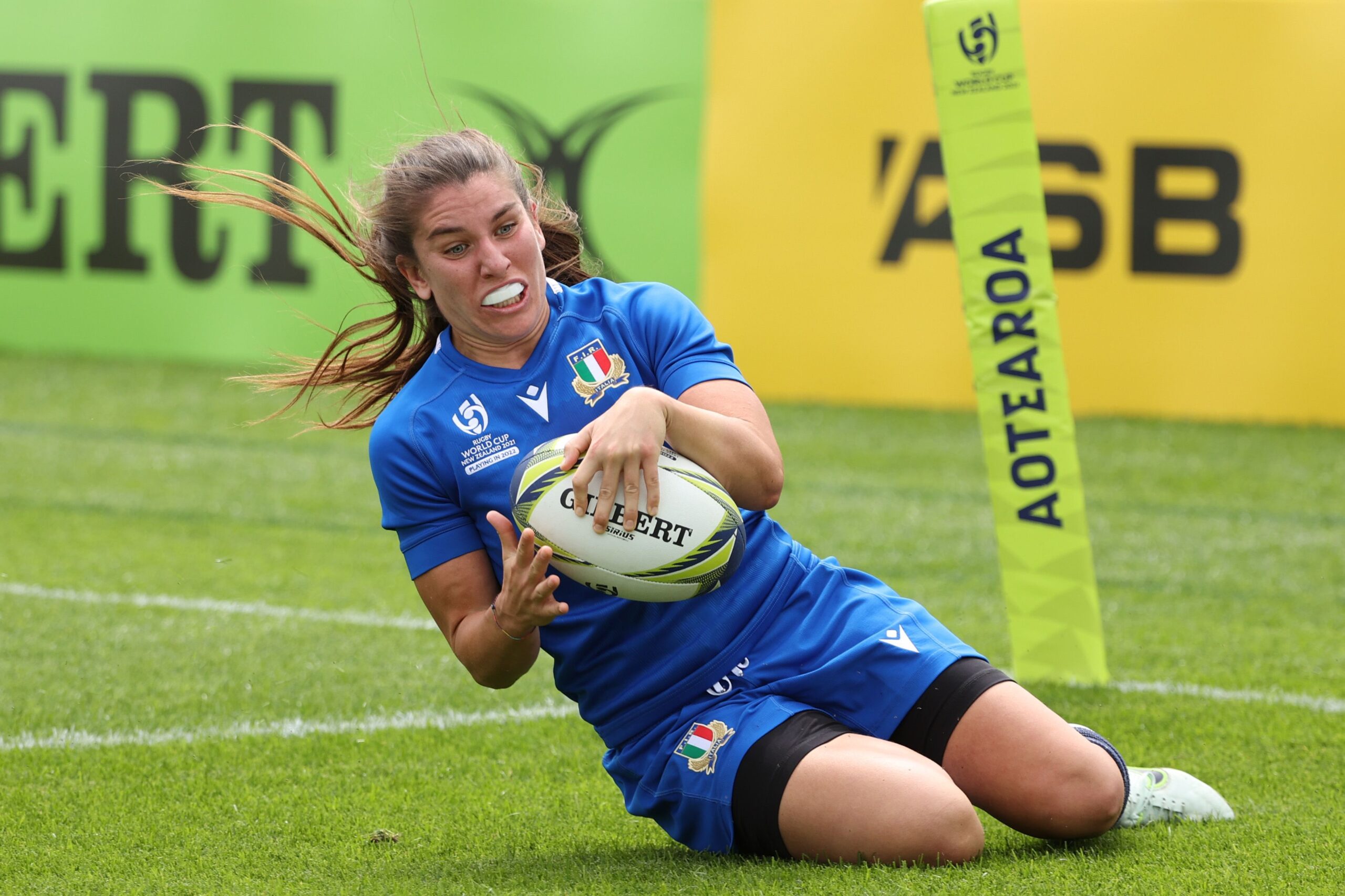 By game’s end, Italy had eight clean line-breaks to the USA’s two, and the Americans missed 29 tackles. That said, the USA’s loss to Italy should not be a surprise, per se, as the Azzurre program has advanced (e.g., centralized contracts) since the teams last saw each other in 2017. And Italy surpassed the USA in the World Rugby ranking after beating France this fall.

“Really important recovery day tomorrow, that is most important with these tournaments because the next game will come up really quick,” Zackary said of next steps. “Get selections out of the way pretty early so we can start moving and grooving in our kind of connections there. Most importantly we beat ourselves today and I think that is the takeaway, so it is about how we can be a little bit better with our attack and our defense and our set piece.”

The Eagles play Japan, which lost 41-5 to Canada, next weekend.