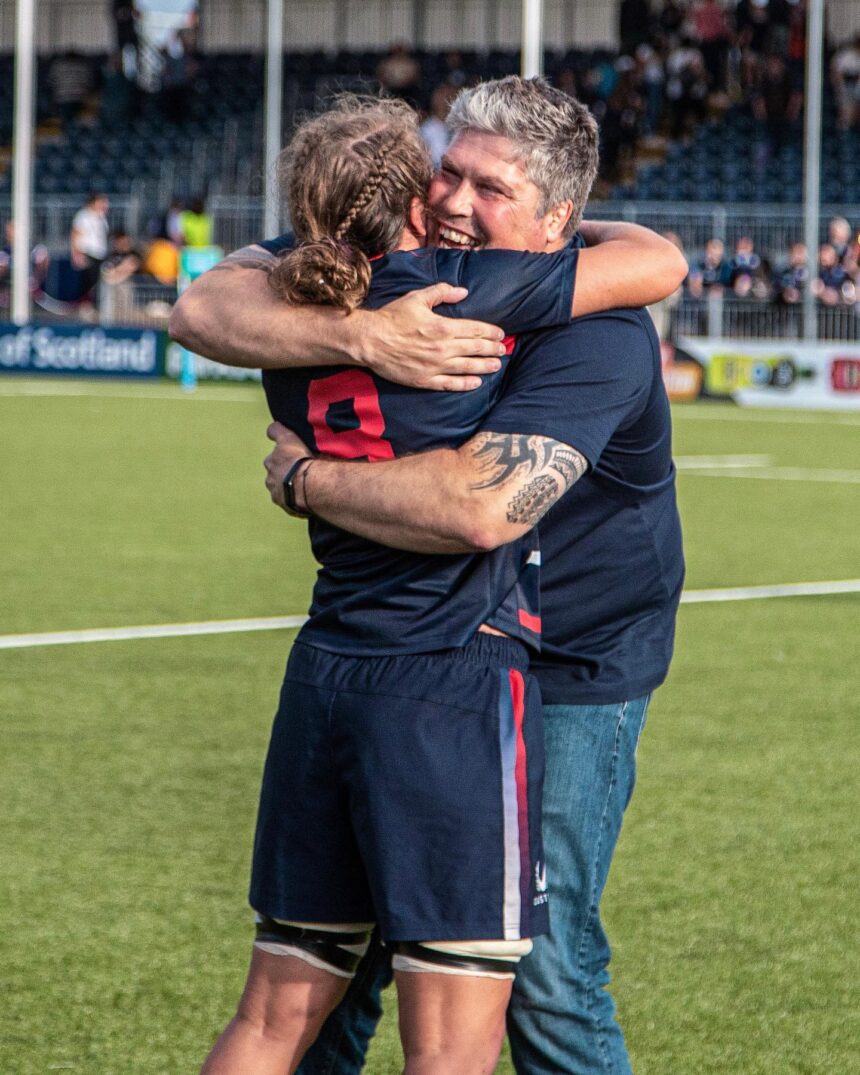 The USA Rugby Women’s National Team (WNT) is in need of a new head coach, and the announcement comes through Rob Cain himself. On Jan. 2, 2023, the former head coach took to Instagram to bid his farewell to the Eagles community:

Cain, who is English, was named Eagles head coach in 2018, just as he’d finished his fourth season with the Saracens women. It had been a thrilling ride (read this great interview) and ended with the then-named Tyrrells Premier 15s championship in 2017-18. The league was a tipping point for the English game – the increasing investment from sponsors and England Rugby – and the world watched enviously on as the women marched toward professionalization. When Cain crossed the Atlantic to join USA Rugby, he became the WNT’s first-ever full-time head coach.

When Cain made his international coaching debut, the Eagles hadn’t contested a test match in 14 months. It was rough going, facing the Rugby World Cup (RWC) 2017 champion, New Zealand, inside Chicago’s Soldier Field, and six days later, it was equally tough flying to England for another big defeat. That 2018 fall tour did end with 19-10 win against Ireland, but more importantly, Cain had his starting point.

The WNT had two more tours before the pandemic introduced a two-year playing hiatus (test matches) for the Eagles. The U.S. went 1-3 at the 2019 Super Series in Chula Vista (the win was a 20-18 decision against Canada), and then dropped two games to Canada in November 2019. When covid canceled rugby calendars, Cain introduced an innovative set of Daily Training Environments to Glendale, Colo. USA pool players lived and trained together in bubbles for weeks at a time, and this setup occurred three times between fall 2020 and spring 2021. It was something.

In the meantime, RWC pool players started signing professional contracts with the now-named Allianz Premier 15s league, as the Women’s Premier League in the U.S. wasn’t able to resume until spring 2022. More than 20 of Cain’s players relocated to the United Kingdom and played regular, challenging ball. Eight Eagles were rostered for the 2021-22 championship between Saracens (2) and Exeter (6).

The U.S. and overseas groups reunited in November 2021 and went 0-4 against Canada (2), England and Ireland. That was tough, as it had been two years since the Eagles played as the Eagles, and the group was resetting with the knowledge that there was only a year left until the RWC.

In summer 2022, the USA played three useful games in New Zealand as part of the expanded Pacific Four Series. The losing streak against New Zealand and Canada continued, but a two-point win against Australia buoyed spirits. Perhaps the team’s best outing occurred against Scotland in late August. It was the penultimate match before the RWC, and the Eagles played expansive, fun rugby in a 21-17 win. The team followed with a loss to England but nearly outscored the Red Roses in the second half – which frankly, is a win.

RWC 2021 (played in 2022) was phenomenal, and the semifinals and final absolutely delivered mouth-watering, high-class rugby. The USA opened with a loss to Italy, a 30-17 win against a feisty Japan, and then two losses to Canada to exit at the quarterfinals. Unlike previous years, there were no placing games, so the Eagles didn’t have an opportunity to distinguish itself between 5th and 8th place.

head coaching position is vacant Rob Cain has left the USA Rugby Women’s National Team at the end of the 2022. . He served in the position accepted the position in 2018, Cain’s contract extended through the Rugby World Cup 2021 (played in 2022), but was not automatically renewed following the then went under review after the New Zealand tournament ended in November.

“It’s standard procedure for us to assess each of the [USA Men’s and Women’s National Team] programs and structures at the end of every Rugby World Cup and Olympic cycle, and that process began after our exits in New Zealand and Dubai,” USA Rugby CEO Ross Young said in a Dec. 9. announcement.

The men’s Eagle head coach, Gary Gold, resigned after the USA failed to qualify for the RWC 2023.

“Rob has had a hugely positive impact on developing the program during his tenure, but his contract will not be automatically renewed,” Young continued. “We will await the findings of our review to decide what the future looks like with Rob and next steps regarding coaching assignments and High Performance roles.”

USA Rugby has not released its findings, but Cain is no longer head coach of the WNT.

“My journey has been with some of the most courageous, strong, and talented women I have had the opportunity to coach and I have been fortunate enough to create some brilliant memories with some remarkable people,” Cain wrote on Instagram.

“Unfortunately, the challenges have never been greater for the Eagles players to perform to their best of the ability on the international stage,” the coach added. “I hope the solutions given to the many threats will be acted upon in the coming months and years ahead.”