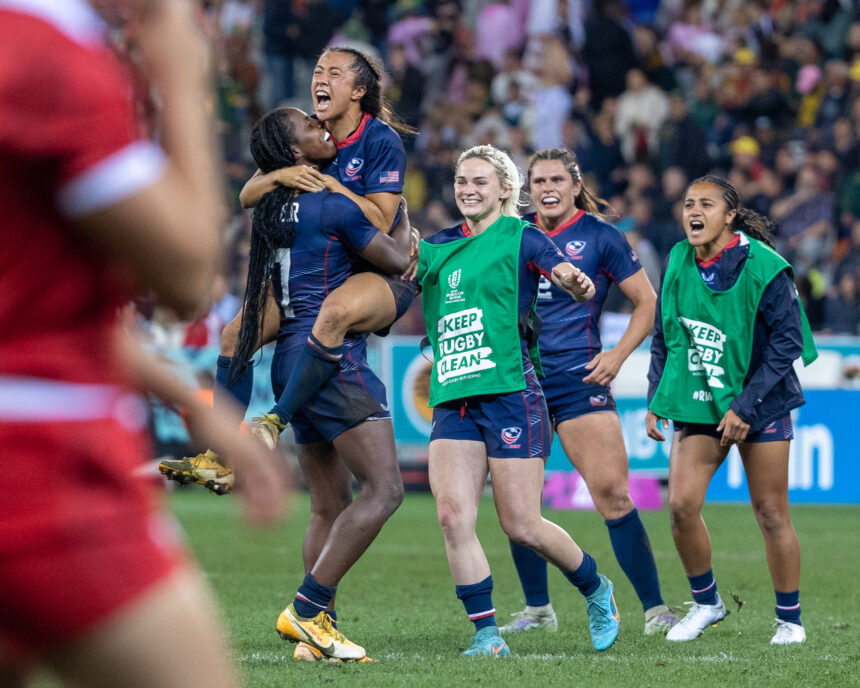 The USA Women’s 7s Team has advanced to the Rugby World Cup Sevens semifinals, having defeated Canada 10-7 in today’s quarterfinals. That means the Eagles will finish will no lower that 4th at the quadrennial tournament, which is being held in Cape Town, South Africa, and live-streamed in its entirety on Peacock.

The Eagles got the job done, and that fact takes priority in terms of digesting the performance. The quarterfinal did occur at 10:05 p.m local – nearly 32 hours after the team’s opening win against Poland – and that is an awkward timeline for a 7s tournament.

“I think that’s a first and I’ve been playing for 10 years,” USA captain Lauren Doyle said of the late kickoff. “So, that was wild to get up for. But I’m so proud of the girls, that was a true test of our grit and how much we had each other’s backs. I’m just very proud of us.” 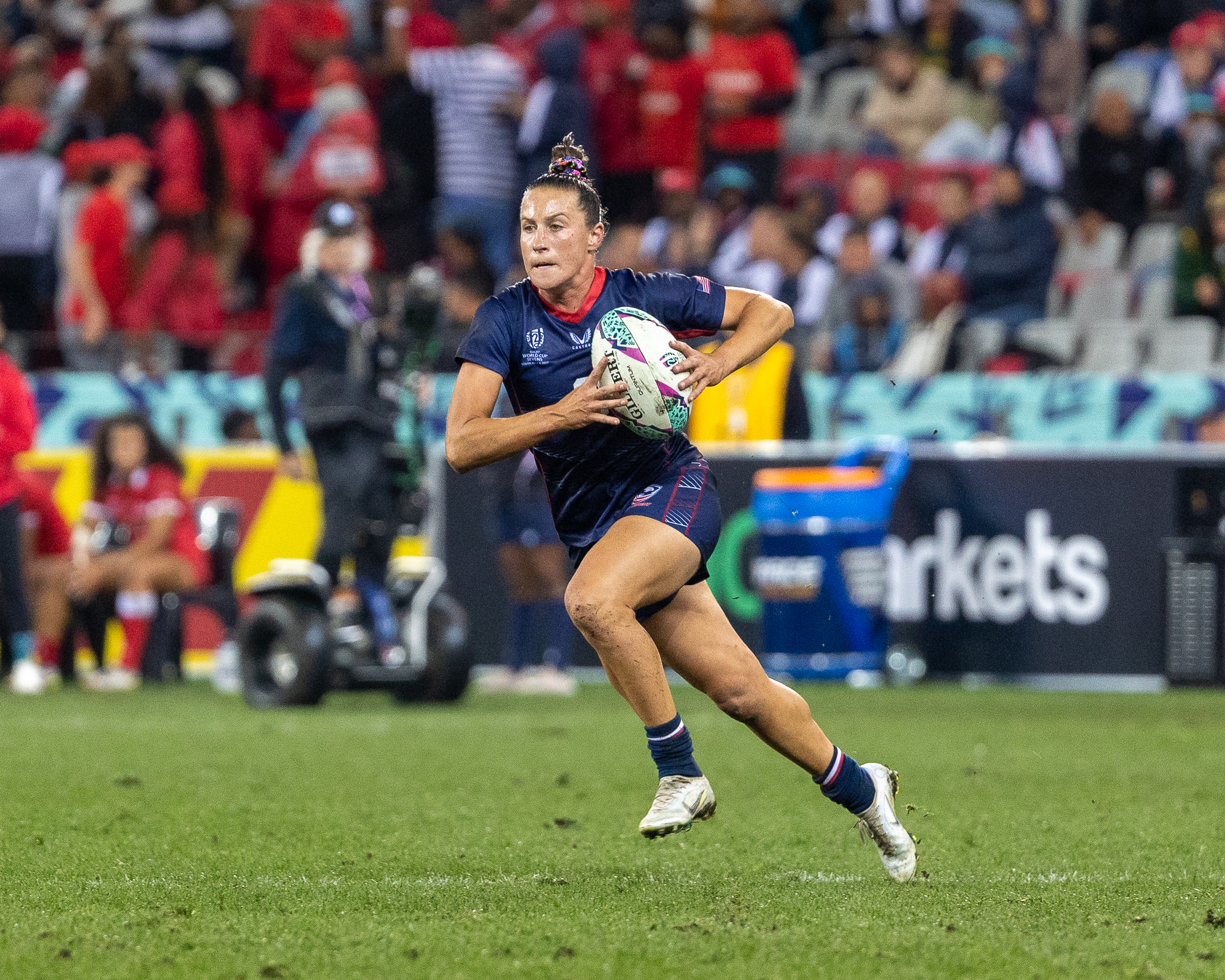 Canada was on the same timeline, obviously, but the expectation was that the North American rival would be playing with a bit of chip on its shoulder. The inexperience of the squad was oft-mentioned in Canada’s Round of 16 match, and if China hadn’t made so many unforced errors in the green zone, Canada could have very well been playing for the Challenger Cup instead of the championship. But Canada gained confidence in the come-from-behind win, and had nothing to lose in facing a familiar opponent.

Canada sent the opening kickoff relatively deep and the USA let the ball hit the ground and bobble along the ground for an uncomfortable amount of time. But from that recovery, the USA kept ball in hand for the subsequent two-and-a-half minutes. It was remarkable, actually, as Canada absorbed the phases on defense, and the Americans didn’t err in retaining possession. Both teams were waiting for mistakes that the other didn’t end up making. 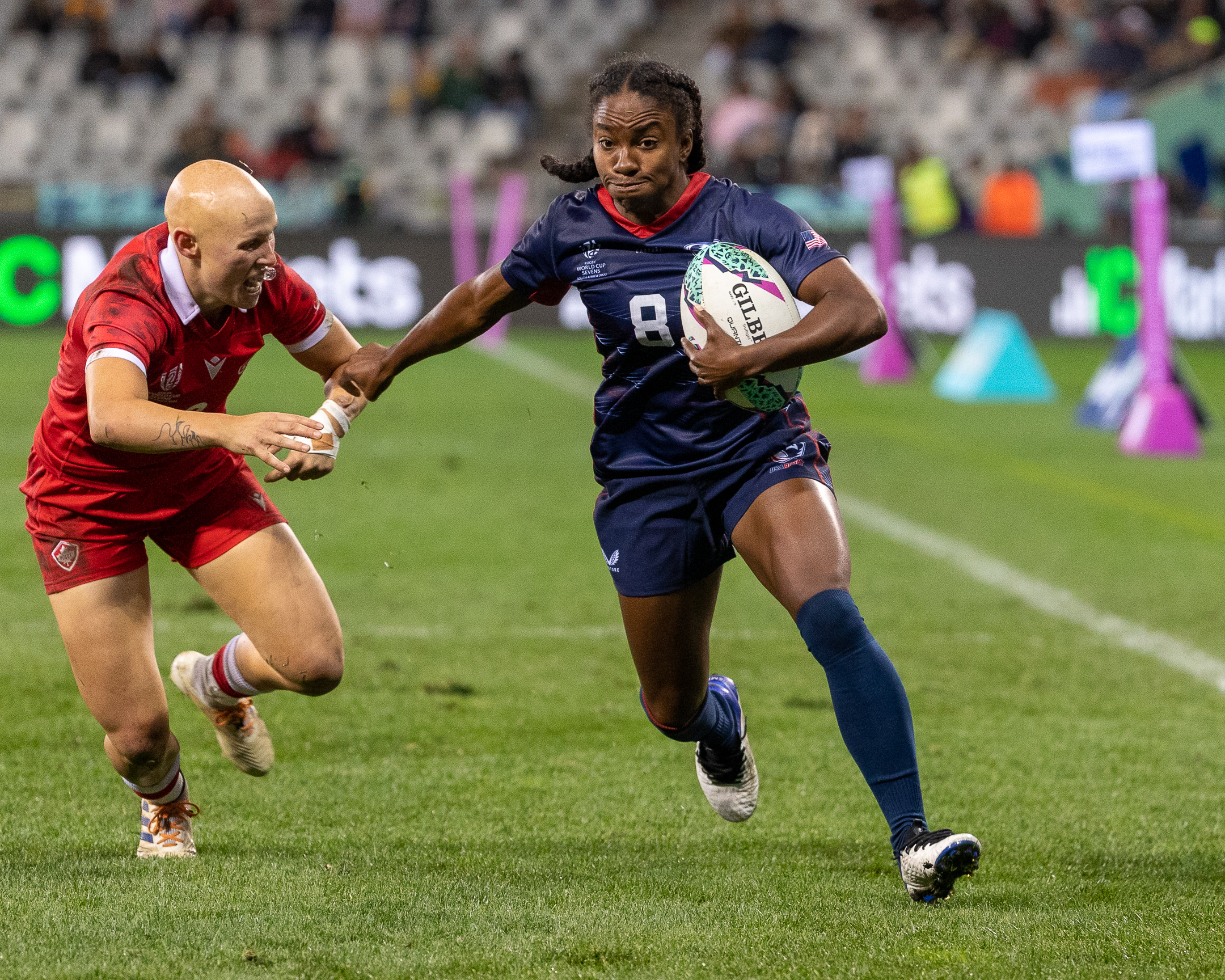 The Eagles weren’t necessarily running onto the ball and challenging the defense in that regard, and were happy to cut against the flow and make some yardage through the middle of the field. But those efforts didn’t really loosen up the sideline, as the attack didn’t consistently make use of the full width of the pitch and Canada could cope defensively. There was one exception during that the opening series, when Doyle baited the final two defenders and then just got the ball out of contact to wing Jaz Gray, who scooped up the dribbling pass for the try, 5-0.

“We value our finishers so much,” Doyle said. “We try to do a lot of work in the middle so we can set them up easy but to have someone that can individually finish when you need them to is priceless and we definitely value that. 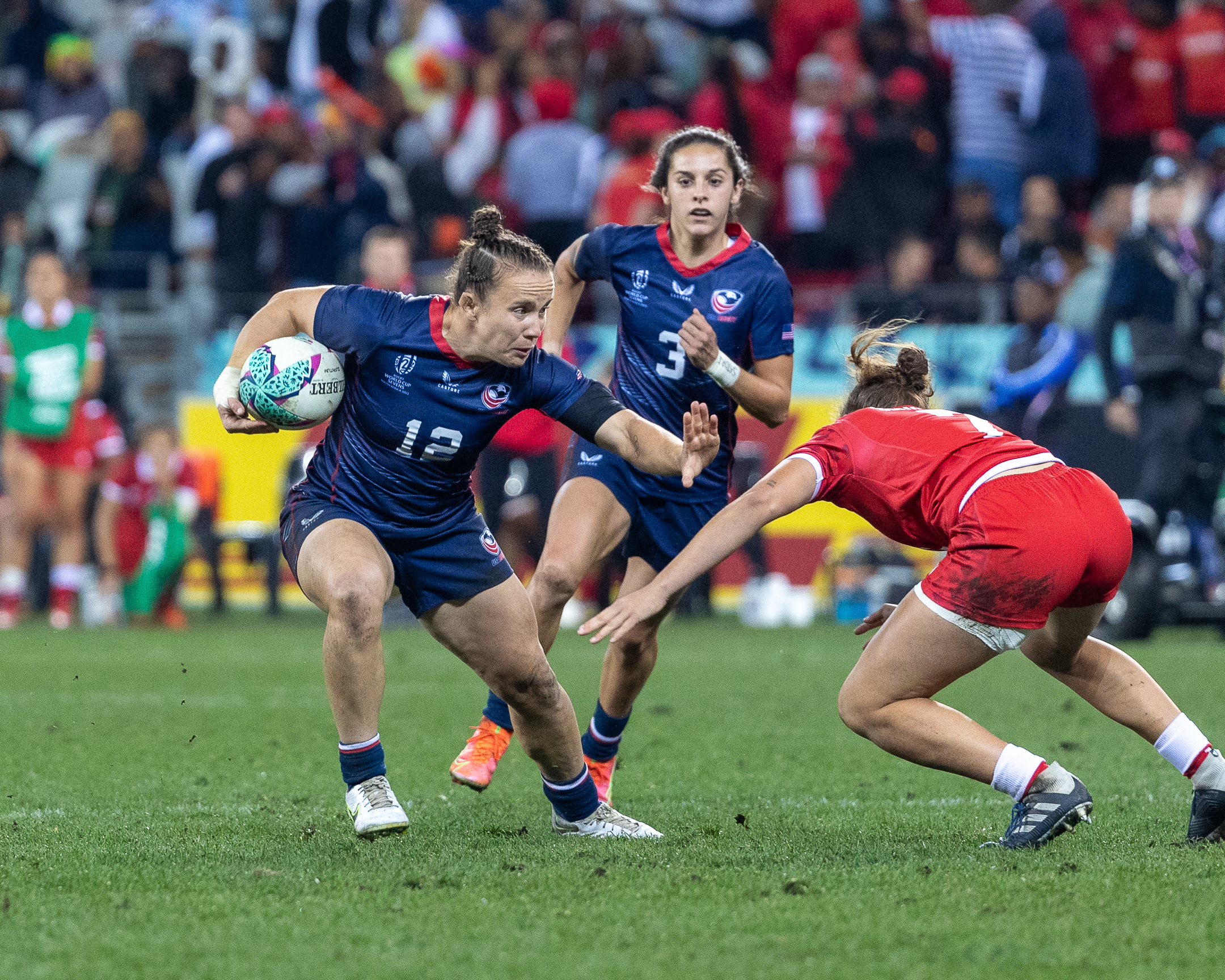 Gray’s fourth try of the tournament ended up being the only points of the half, but not until three penalties – two to the USA, one of Canada – extended the opening stanza to well beyond seven minutes. During the break, USA 7s head coach Emilie Bydwell could be heard instructing players to trust themselves and execute those sideline maneuvers earlier, so as to create and take advantage of 2-on-1 situations , and to also exercise the full width of the pitch.

But it was Canada that went to work early on in the second half. Less than a minute after kickoff, Canada scooped up a USA pass that hit the ground and turned that into a try from Keyara Wardley, who showed great acceleration through the gap. Olivia Apps nailed the conversion for the 7-5 lead. 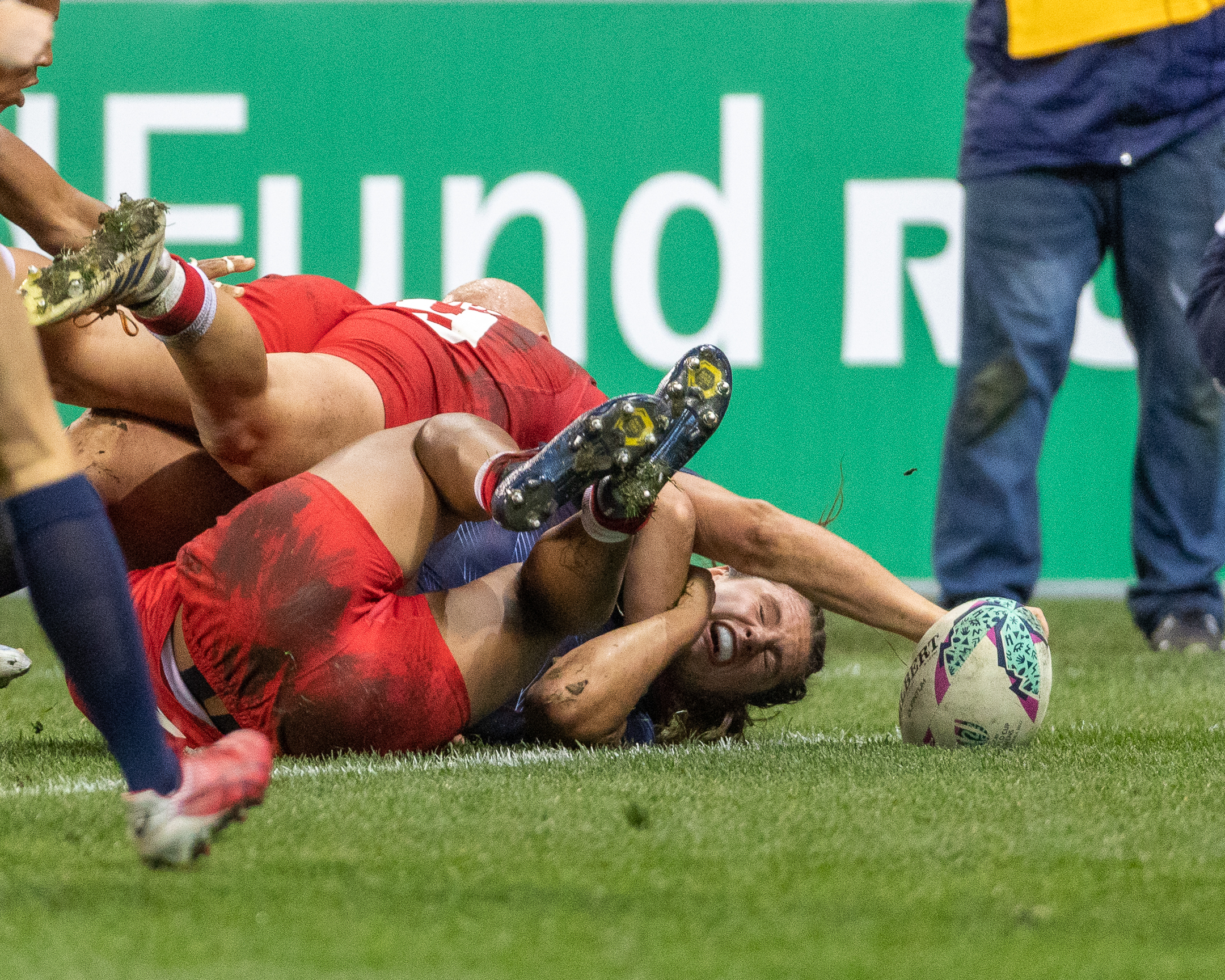 Canada looked to ride its momentum when it picked up the restart on the bounce but fortunately a not-releasing penalty halted that go-forward. From that point on, Canada relinquished penalty after penalty. Some were aggressive penalties – like jacklers getting pinged for not releasing – to lazy penalties, like offsides. In between, hard carries from players like Ilona Maher and Kristi Kirshe tested the resolve of the Canadians.

Finally, after a set piece on the Canada 10 meter, Maher took a hard angle to the try line and barreled through Apps and Wardley to ground the ball across the line, 10-7 to the USA. Pure strength.

Maher-vellous!@ilona_maher just has too much power for the Canada defence as she scores the winner to take @USARugby through to the semi-finalsRWC7s | HereToSevens pic.twitter.com/xgbnLkPr0E

There were fewer than two minutes to play at that point, and the USA kept Canada on the back foot. Nothing flashy, just working the clock and the sidelines and the middle, until time expired. The USA is into the Championship semifinals against Australia on Sunday at 7:05 a.m. ET.