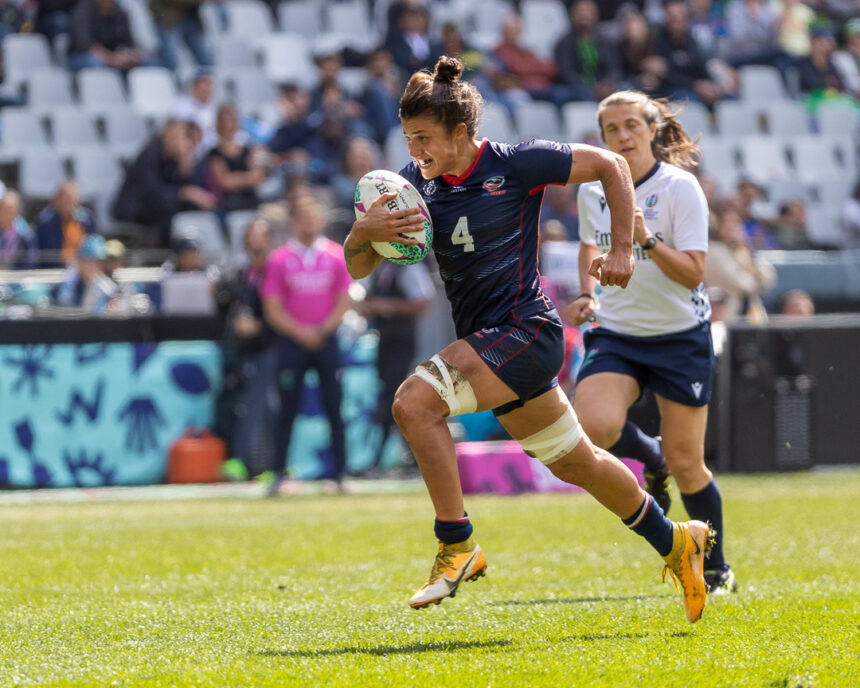 A medal evades the USA Women’s 7s team at the Rugby World Cup Sevens in South Africa. On day three, the Americans lost 17-7 to Australia in the semifinals and then France 29-7 in the Bronze medal match. The Eagles finish 2-2 in Cape Town. [Lead photo: Alex Ho, hoiho.net]

In the semifinal, the USA had loads of possession with lots of long attack series, but the Australian defense was resilient. Even though Australia did miss lots of tackles and was susceptible to big power carries through the middle, the sidelines were intact and key turnovers kept the u.S. off the scoreboard until late in teh match.

The USA had an opportunity early in the game, when back-to-back penalties put the Eagles in scoring position. A Sharni Williams poach and then not-releasing penalty relieved pressure, and Australia used the momentum to put play in the Americans’ end. Madison Ashby took a later line across the defense, Charlotte Caslick took the switch and also looked to go lateral, but then spied a gap for the line-break and try, 7-0 with Willams’ conversion.

Before the break, Jaz Gray incurred a yellow card for a deliberate knock-down, and the USA was very lucky to not give up another try, as a finishing pass out wide was knocked on.

A deep kickoff hit the ground and then a soft pass out of the ruck allowed the defense to really swarm. Williams forced a knock-on for the turnover. From the set piece, Caslick wrapped at incredibly pace and took the ball on too hard of an angle to be stopped before the try line: 12-0.

Naya Tapper, Kristi Kirshe and Ilona Maher made big gains through the middle, and then a flat pass from Kayla Canett to Nicole Heavirland on an inside line put the vet into the try zone. Heavirland converted for the 12-7 scoreline and a minute to play.

But Australia kept the restart. Alysia Lefau-Fakaosilea took a low pass out of the ruck, looked to send it and then reconsidered with a dummy and breakaway try, 17-7 to end the game.

Meanwhile, New Zealand beat France 38-7 in the other semifinal, setting up the Bronze medal match. France was working with a short bench but played with so much gusto. Chloe Pelle was the essence of go-forward and drove an attack mindset on both sides of the ball. Les Bleus dotted down two tries in the first half, both from youngster Lili Dezou, and Yolaine Yengo connected on a conversion for the 12-0 halftime lead.

The USA wasn’t able to work the sidelines the way it had in the earlier rounds – there was a hesitancy almost – but Naya Tapper had a go not long after the break. A well timed step saw the winger fly free for the centered try that Heavirland converted, 12-7, with lots of time to play.

But the game then shifted to France’s advantage for the remainder of the match. Tapper was sin-binned during a 2-on-1, batting down a pass that surely would have led to a try. Pelle powered to the line and then the ball worked wide to Alycia Chrystiaens for the try, 17-7.

The USA gave up a penalty during its own 22m scrum, and the France leapt into action. The ball moved wide to Joanna Grisez for the score, and Yengo added another difficult conversion, 22-7. With time expired, Pelle tapped quickly through a penalty and Ian Jason finished with the score: 29-7 the final.

“Obviously, feeling pretty sad after the game – after kind of getting on a high and getting some momentum with the try, then making a big mistake to put my team down to six which allowed France to get a couple of tries on us, so it didn’t really set us up for the result that we wanted,” Tapper said.