For a second-straight year, the Austin Valkyries are sending two teams to the Western Regional Championships, and to boot, it’s all happening at home. The teams that go 2-0 this weekend will advance to the national championships in Obetz, Ohio, in early June.

Austin is one big player pool, and club captain Brittany McGhee explained that few are dedicated to just the DI or just the DII team. Clubmates are flexible, especially as management balances the process of getting players playoff eligible and building chemistry within squads. On the pitch, the team looks toward McGhee in the front row and fellow co-captain Jordan (Ynostrosa) Heller at flyhalf.

“Jordyn is an amazing talent,” McGhee praised. “Great boot, great vision, vocal. One-on-one, she’s quiet, but on Saturday and at training, she’s a different person and really leads the backline. She communicates through the scrumhalf that forwards are in the right spot. I hold it down in the pack and together we’re a pretty lethal combo.”

As for new talent, watch for Geraldine Thomas, a former Saracens (UK) prop who plays No. 8 for the Valkyries. The years of experience and skill that the expat injects onto the pitch elevate the whole pack.

The trio played the majority of their games on the DI side, although McGhee is eligible for the DII team as well. The DI side took some time rev up early in the season and it cost the team an automatic berth to nationals.

“We lost the first two games against Houston, which was really a huge shock to us because we’d been pretty dominant in the Red River for a long time. Houston is our biggest competition in this part of the country,” McGhee said. “We got caught on the back foot.

“It was definitely a mental thing,” the front row said of those holiday-season games in December and January. “Our heads weren’t in it and maybe we were looking down the road at nationals a bit. That 1-2 punch reminded us that we have a threat right here in front of us.”

Austin did regroup for a 44-19 win in March, the teams’ third game against each other, but standings wise, it was too late. Houston Athletic won the league and the automatic berth to nationals.

But it wasn’t until April that USA Rugby finally addressed the vacant seed in the west. Reigning champion Life West out of NorCal qualified for the 2019 Women’s Premier League fall season and thus removed itself from DI play this year. In April, USA Rugby announced that Red River got the second seed and the pleasant surprise meant the DI Valkyries could return to playoff mode. 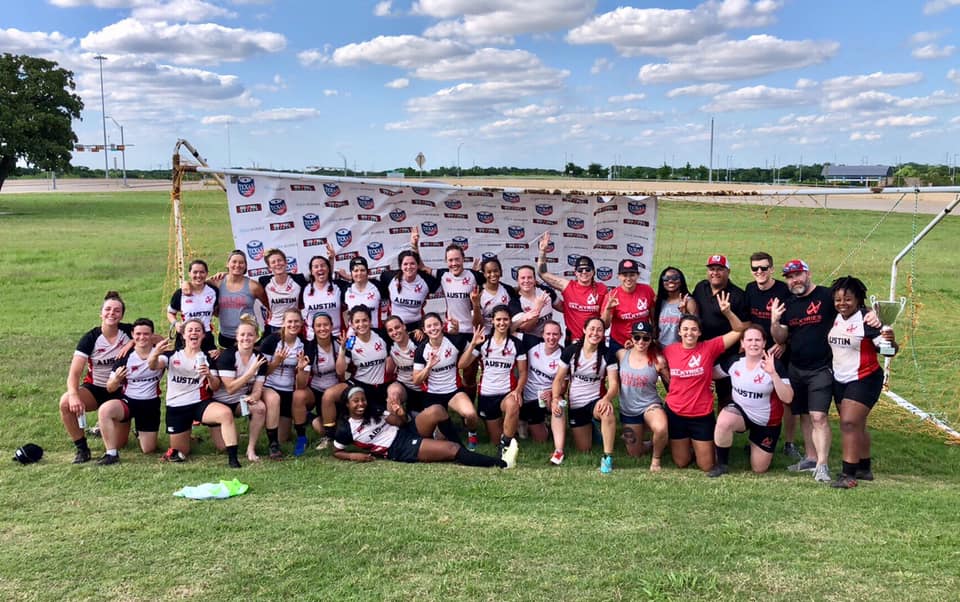 The DII side had a more traditional run-up to the playoffs and weathered cohesion issues early on. It’s a balancing act, fielding two teams concurrently, and that building chemistry between different combinations takes time. The DII side lost just one game to San Antonio (31-22) and thus advanced to the Red River final four in early May.

“At the beginning of the spring, there were talks that Little Rock was going to be our biggest competition,” McGhee lent background to the team’s Red River semifinal opponent. “We traveled with 16 and won [25-5].”

Austin had a full squad in Dallas, host to the league championships.

“Everything we had been working on – defense and work rate – it was all there at every phase,” McGhee said of the 44-22 semifinal win. “We executed like we haven’t seen all season. It was all in action, everything we practiced.”

Meanwhile, San Antonio defeated Dallas Athletic 64-12, setting up a rematch of Austin’s only loss this year. The team reviewed those vulnerabilities that the Riveters had exploited in their first meeting.

“We went over the positives from our win against Little Rock and why it was so decisive a win. It was very clear what we had to do to win Sunday,” McGhee said. “We had to bring the same intensity and neutralize all of their threats – especially in the back line. Everyone was hungry.”

McGhee lauded the team’s execution once again and the relentless exertion of pressure. Austin won 53-17 for the return berth to DII nationals.

The DII team will kick off its Western Regional Championship campaign against the St. Louis Sabres, and the DI team will play its national quarterfinal against Houston Athletic for a fourth time this year.

“The energy is just high overall,” McGhee said of the club vibe. “We have to show the country that Austin and especially Valkyries can compete at the highest level at nationals. … Our goal is always to go as far as you can.”