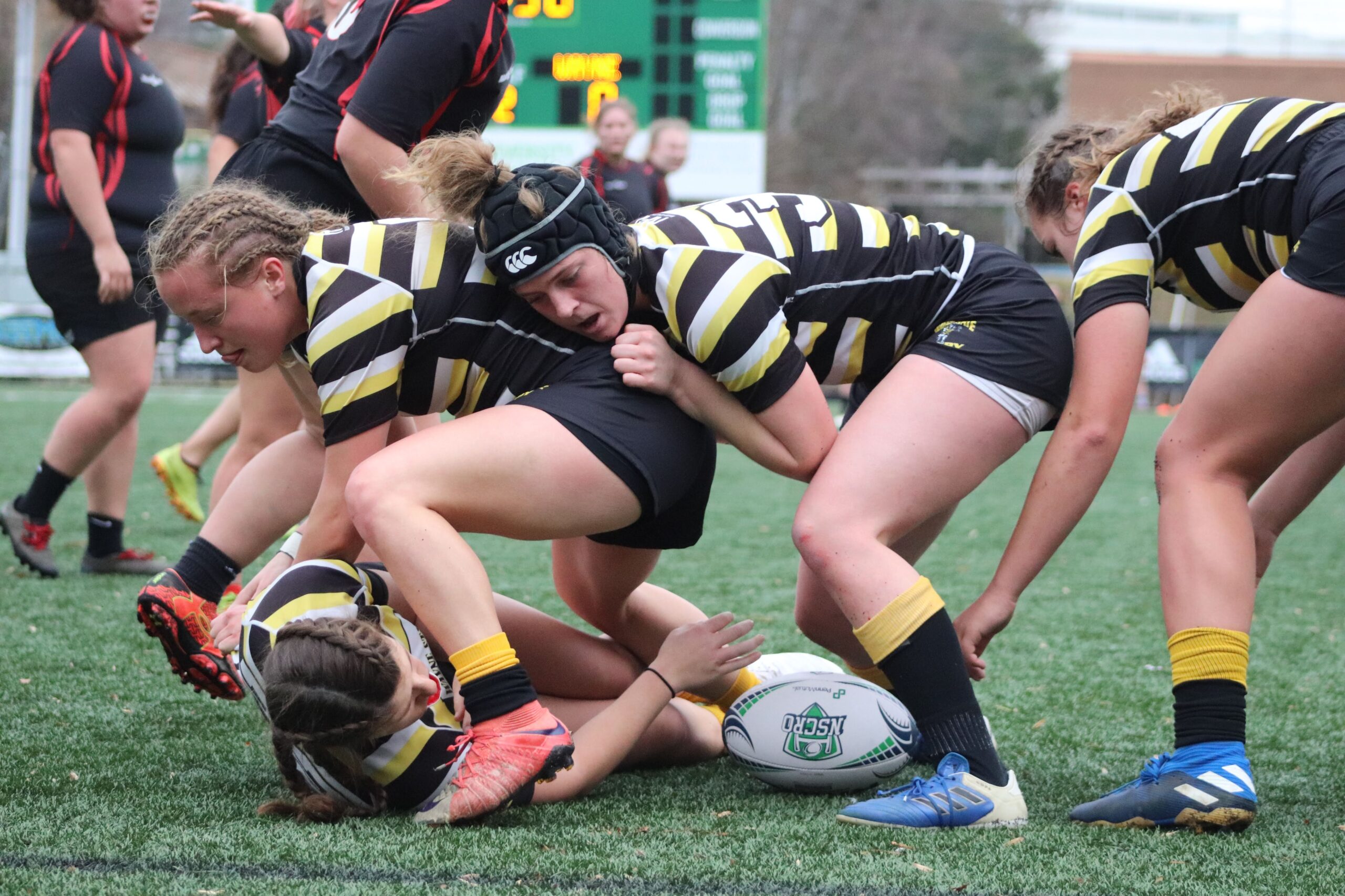 RELATED: WSC: NSCRO is our Home

The trophy marked the Wildcats’ 11th NSCRO national championship when considering 7s as well, but that didn’t mean the path to this year’s title was totally familiar.

“As every championship is unique because of the work we put in to be consistent returners to nationals, this one hit a little different,” Wayne State College pack captain Anna Fleecs explained. “Never before have we had such an incredibly large roster where every member has gotten along so well and has been so inclusive. As a captain, I couldn’t have asked for a better group to end my 15s career. They were the most coachable, respectful, and hard-working group I’ve ever worked with and I am very proud.” 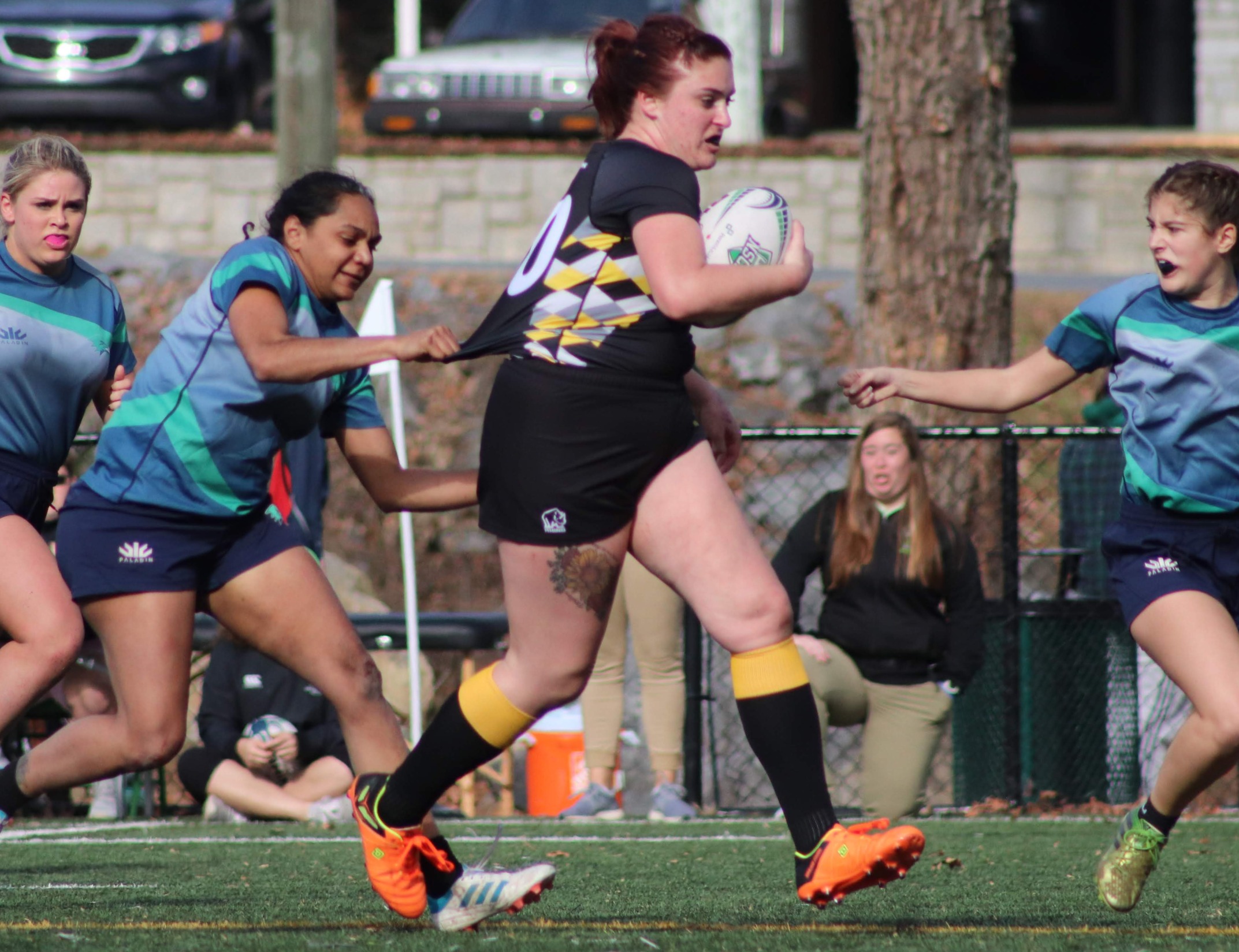 Coach Barner recapped the team’s preparation through the fall (read more) and anticipated a tough game against semifinal opponent MSU Moorhead. The Minnesota team was the last program to win the NSCRO 15s national title prior to the Wildcats’ current streak.

“We played Moorhead last year in the semifinals, but they have definitely improved since then. We did not score for the first 20 minutes, which is just a testament to how tough of a team they are,” Wayne State College backs captain Brook Hoesing noted.

The Wildcats confronted a team steeped in powerful ballcarriers, and a large pack that could run on a tilt. Fleecs indicated that the scrum did well despite the weight disadvantage, and Hoesing explained some defensive adjustments to account for the back attack. 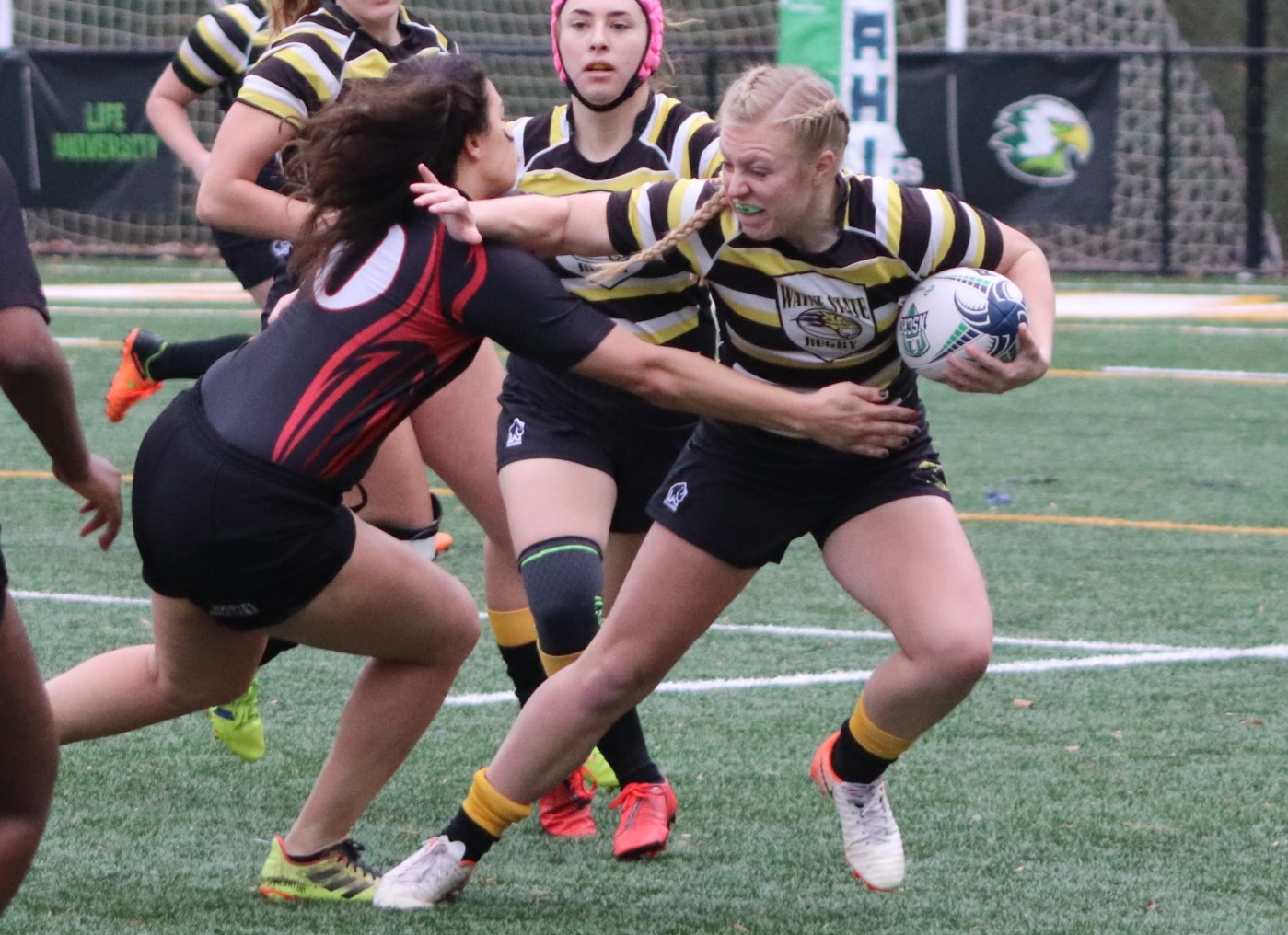 “They have a very talented #10 [Jasmyn Nash], who we knew we had to shut down since she is an extremely hard runner and the only one from the team who scored on us last year,” Hoesing explained. “Also, their #12 is extremely fast and shifty, so we had to move around our defense, moving myself to cover [Nash] and our fastest back, Lauren Nelson, to cover #12.”

Wayne State College built a 26-0 lead into the break, and both captains agreed that the team found strength in its defense.

“Our offense was a bit unhinged and not as cohesive as it normally is, so defense definitely carried us through,” Hoesing continued. “They had us backed up in our own goal a few times, but we held fast while our starters were in and kept them from scoring and utilizing their star players.” 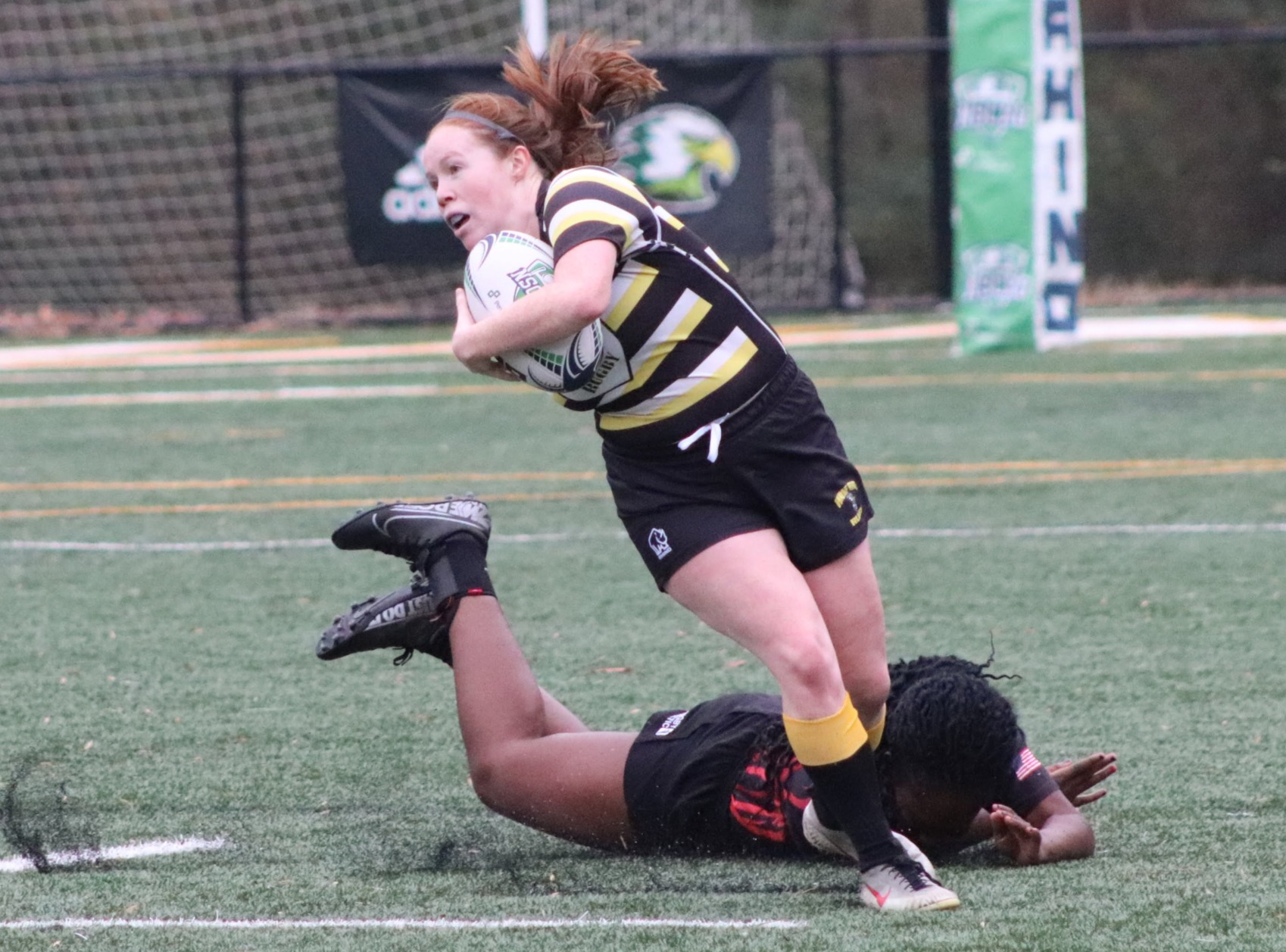 “We were able to stop their hardest runners and had some quick tackle jackals to get the ball back,” Fleecs added. “Although this game wasn’t our cleanest play, we came out in the second half playing more ‘Wayne State Rugby’ where our chemistry finally started to flow.”

Kennedy Jones had a great day and carried the team offensively with several damaging runs.

“It takes that girl two seconds to hit top speed, and no one ever expects her to be as fast as she is,” Hoesing praised.

Moorhead was able to score later in the match but Wayne State College collected a 57-14 semifinal win to advance to the final. On the other side of the bracket, Endicott College overcame a halftime deficit to beat Lee University 31-10 and earn its first berth to a national 15s final. 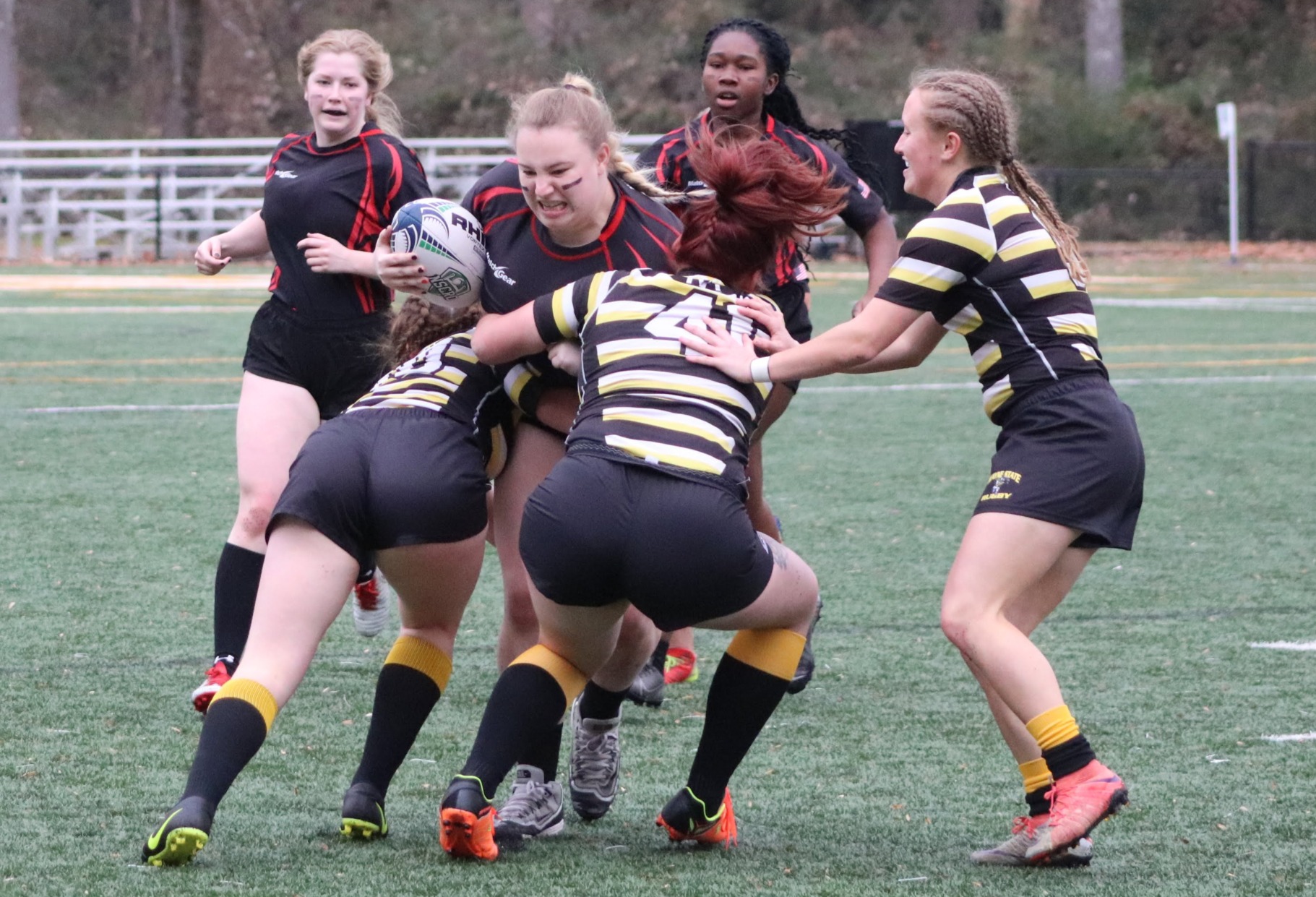 “What Moorhead had in size, Endicott had in speed. They did not have the ball a ton offensively, but when they did they were quick to show their speed and agility,” Hoesing credited the New Hampshire squad. “Defensively their back line was extremely quick to come up in our passing lanes forcing us to go into contact.”

The game plan against Endicott, Fleecs explained, was to let the forwards run rampant. The pack attacked the line and drew defenders with a well connected offload game, opening up space for the backs once Endicott overcommitted in tight.

“Our scrum lit the fire for that game. They dominated and were the reason for just about every score whether they were the one to dot the ball down or not,” Hoesing praised the pack. “Two of our backs, inside center Lauren Nelson and wing May Hoesing had an amazing game as well, from shutting down their quick girls defensively, to using the space created by the scrum when we would spin the ball out offensively and score.” 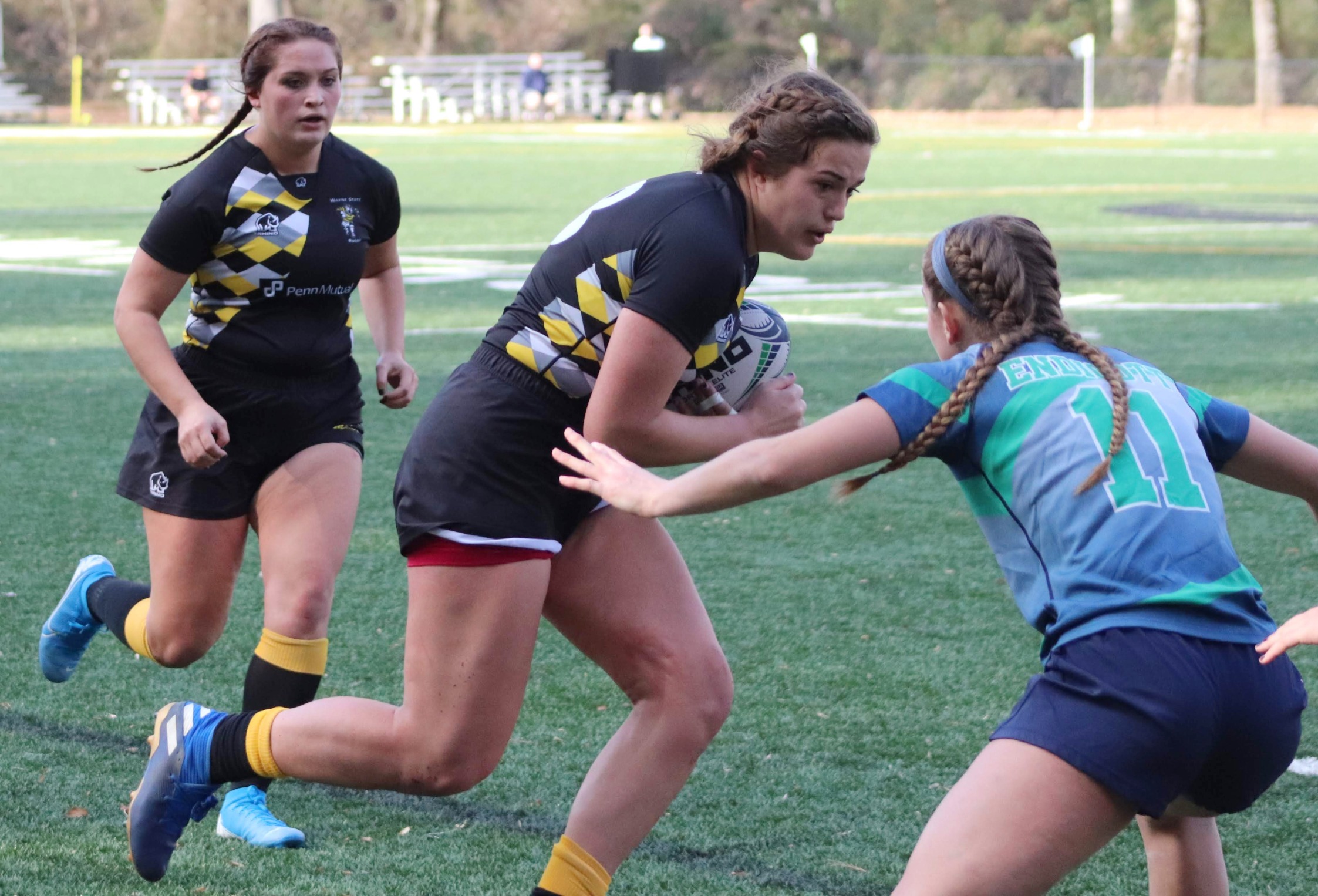 Wayne State College built a 45-0 lead into halftime, and then started rolling in subs five minutes into the second half. Endicott put a pair of tries on the board, but it was all Wildcats: 90-12 the final. Prop Isabelle Robinson was named MVP and scored four times, “ … and no one was more deserving,” Hoesing praised.

“She is one of the toughest players I have ever met. Takes about three girls each time to get her down.”

“One thing that we always pride ourselves on is having 15 players that are unstoppable,” Fleecs thought on standouts. “We play teams that have two or three extremely athletic and talented players, but when we step on the pitch every single woman knows she’s playing for the sister to her left and right. It’s not one or two people scoring, it could be any 15 of us.” 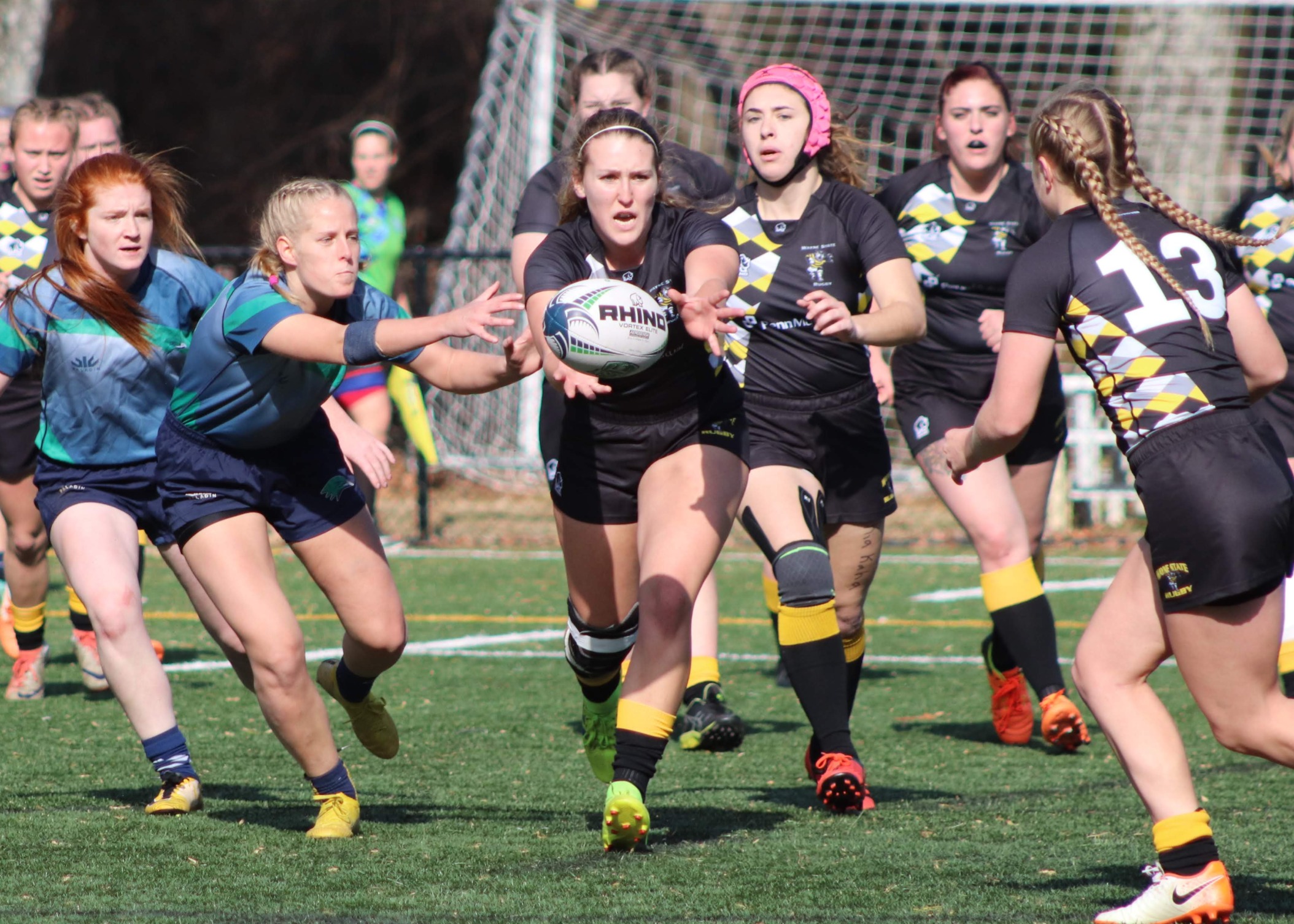 Julia Baxter earned the Heart and South Award, and Fleecs called out two rookie forwards, Taylor Ference and Bridget Sisco, who developed into crucial components of the team and put in “ … outstanding performances on offense and defense,” the No. 8 credited their poise.

“It was difficult to tell they have only been playing for a short four months. Our subs came into the game on fire. I couldn’t be more proud of how hard they played and without a hint of fear. Wayne has a reputation of turning high school athletes who have never played rugby into national champions.”

As Wayne State College celebrated its national title, the team did so with a solid support base that included parents and alumnae who made the trip to Georgia. There are still more heights to achieve, as the NSCRO 7s season returns in the spring. Expect to see the Wildcats again challenging and also sending players to the various all-star teams that the small-college organization fields for its members.

Wayne State: NSCRO is our Home