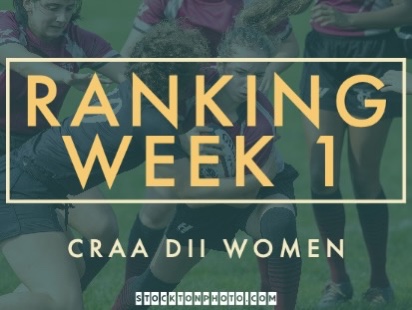 ACRA and CRAA have officially merged for the women’s DII college fall 15s season, and approximately 60 rugby teams are mobilizing for their 2022-23 season openers. It’s time for an early ranking, which relies heavily on last year’s playoffs. These teams, however, deserve an automatic ranking today. Fall 2021 featured lots of pandemic-emaciated programs, and those teams that could perform and travel and commit – those actions are indicators of strength.

Colorado Mesa State is the only ranked team that has contested a league game thus far, defeating Colorado College 31-15 last weekend. The Rocky Mountain conference runner-up and champion Colorado School of Mines both committed to the playoffs in New York last year. Both dropped their quarterfinals but Mines only lost 20-19 to Coast Guard, which went on to give top-ranked Vassar its toughest game of the year. Mesa is playing New Mexico State this weekend, while Mines faces Colorado College.

Vassar is the reigning fall 15s champion and deservedly number one on the list. The Brewers will play a DI friendly against Boston University this Sunday night, and then roll into Tri-State league games. Conference runner-up Fairfield University is also on the list and competed in the fall quarterfinals, falling 30 points short of Vermont.

UVM is the reigning New England Wide conference champion, having beat Coast Guard by three points in that title match. Both progressed to the fall semifinals, where UVM lost to Temple by two points, and CGA lost to Vassar 36-20. It’s that latter, previously mentioned point that influences teams’ ranking – their relative competitiveness with Vassar. [Review the 2021 playoff brackets]. Of course these nuances aren’t as relevant today, but they just inform the starting point for rankings.

The Mid-Atlantic’s Temple lost 74-5 to Vassar in the DII fall final. That’s tough, but all eyes are on the Owls to see how that experience impacted the squad. Kutztown (Mid-Atlantic) and Colby (Rugby Northeast) were also active in the post-season and feature in the rankings.

The rankings start with nine teams but fully expect to expand once league games occur – and that action picks up this weekend.