Next Up: Kitakyushu Cup SF 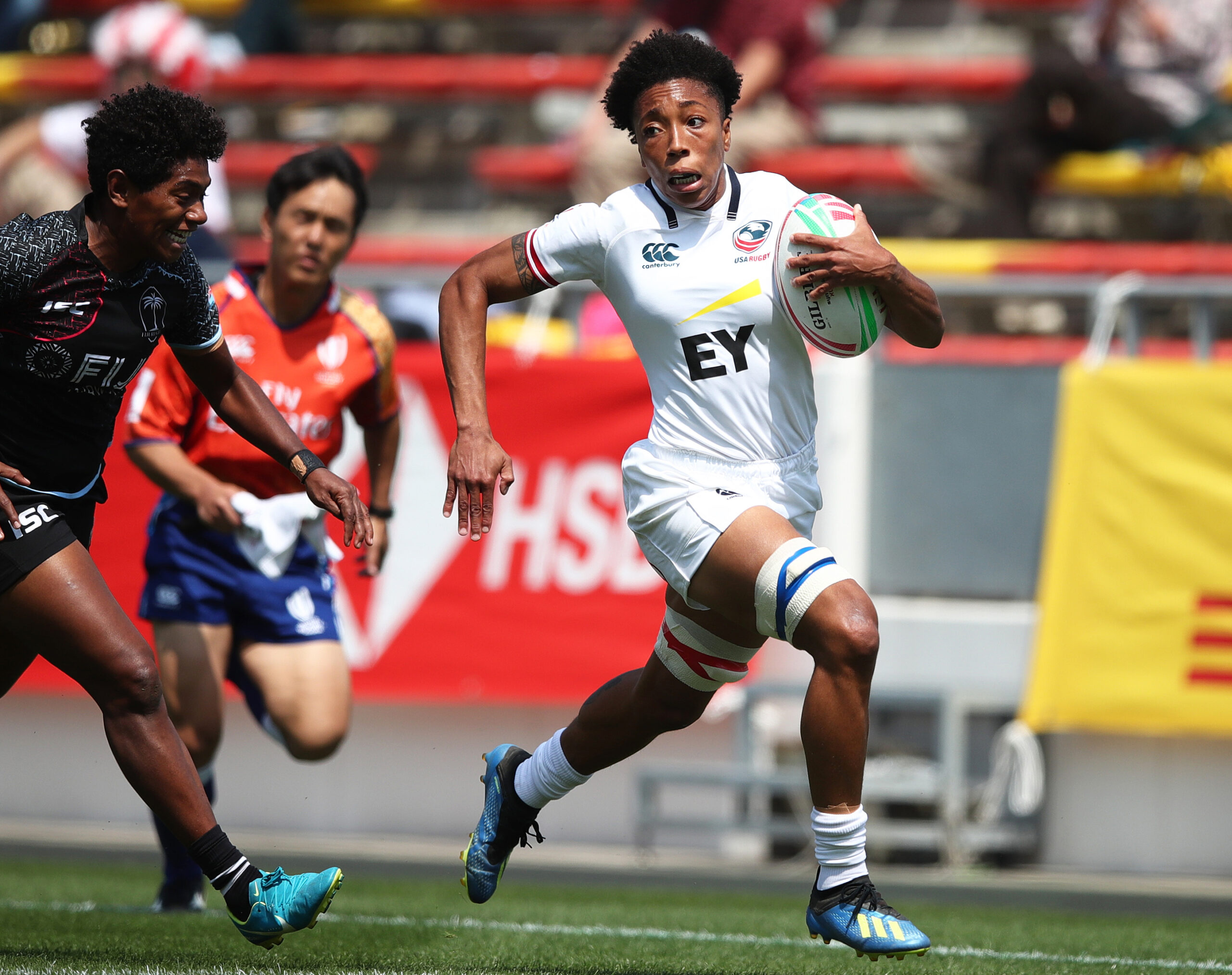 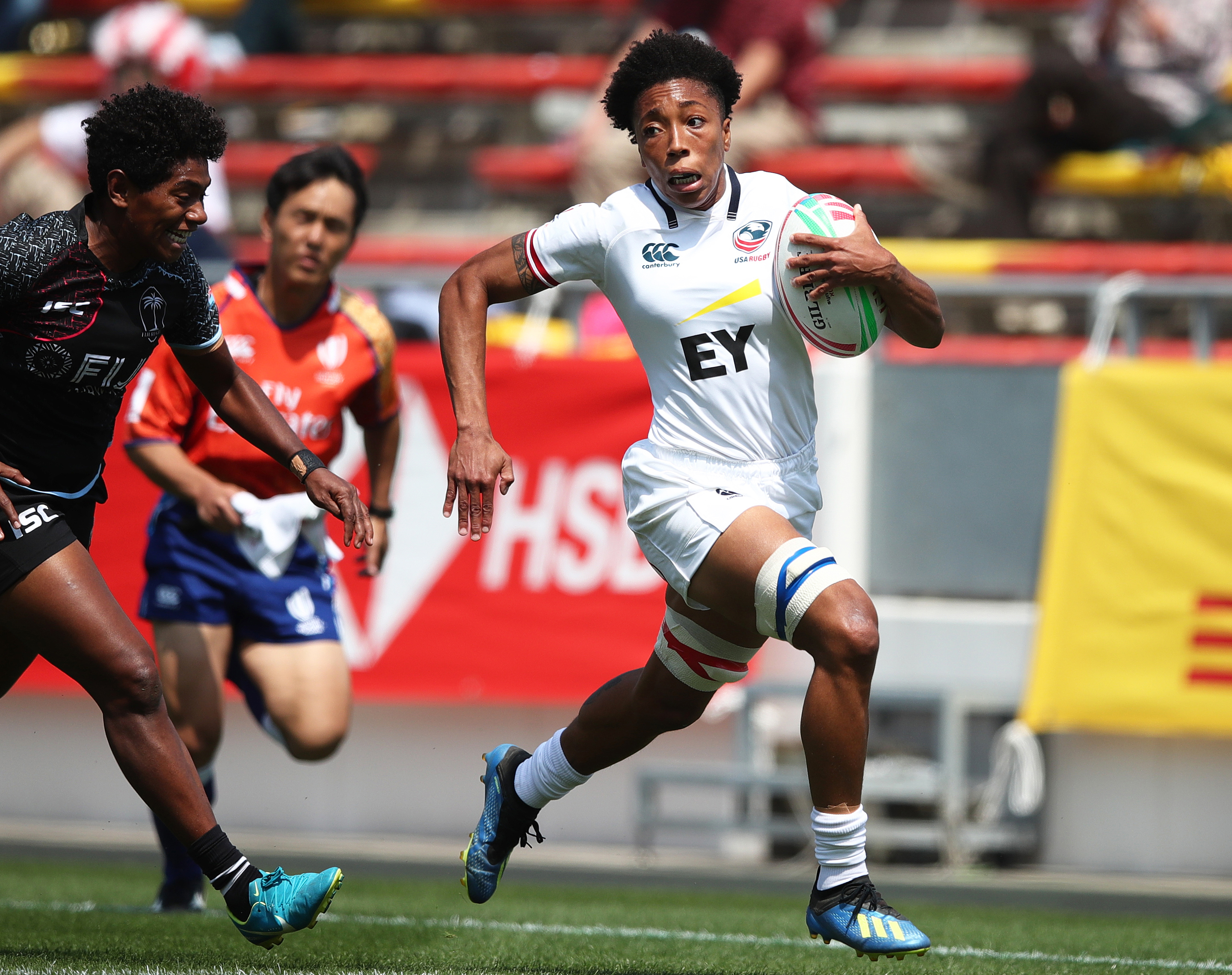 The USA Women’s 7s team is on to the Kitakyushu Cup semifinals after defeating New Zealand 26-19 in the quarterfinals. The Eagles are responsible for keeping the Black Ferns off a Women’s Sevens Series event podium for the first time since Dubai 2017.

Both teams showed signs of nerves early on, as Ruby Tui let the opening kickoff slip through her fingers and Naya Tapper knocked on from a standstill. But on the spectrum of ball-handling errors, the Black Ferns were less consistent than usual, and it translated on the scoreboard.

On several occasions, the Black Ferns moved the ball to one side of the pitch and then quickly swing it to the opposite sideline for an expertly worked switch that stalled the USA defense. The first time it caught the USA, the Eagles were fortunate that a knock-on during ball placement halted play. But it wasn’t the last time that New Zealand foiled its own attack.

The USA reset with a midfield scrum, and Alev Kelter did really well to clean up a bad outlet pass and dart up the middle. Ilona Maher followed with a hard north-south carry, and then Tapper picked up from the base. Cheta Emba was looping hard around the breakdown, Tapper faked the pass and then powered through the fringe for the centered try. Kelter converted, 7-0 after three-and-a-half minutes.

On the very next possession, New Zealand worked the width and saw Alena Saili spin out of contact and break free. Tapper tracked down the line-break but the Black Ferns were quick in support and immediately spun the ball to the opposite sideline for 18-year-old Dhys Faleafaga to score easily, 7-5.

The USA took the restart in the air well but gave up a penalty. As soon as feet were back on the ground, New Zealand was away. Niall Williams worked that switch perfectly but a knock-on nullified the move. The Americans weren’t immune from these mistakes either, and a mistimed pass out wide nearly put its next possession into touch. But the Eagles scrambled and moved the ball to Kristen Thomas, who sized up the opposition and had a go. Tyla Nathan-Wong couldn’t get a hand on Thomas en route to the try zone.

The USA led 12-5 into the break and built out its lead shortly after play restarted. New Zealand sent a deep kick and then applied heavy pressure. Joanne Fa’avesi got the team moving forward, getting past the fringe defense for a few meters, and then co-captain Nicole Heavirland followed suit. Kelter got the pass out wide and took on Tenika Wilson, who just looked gassed when she realized a foot race was on. Kelter tore away for the long-range try and conversion: 19-5.

There were still five-and-a-half minutes to play, so although New Zealand looked tired, the game was far from over, as Shakira Baker and Niall Williams soon showcased. Baker dragged the defense down field and then the switch and quick offload put Williams on a line to the try line. Nathan-Wong converted: 19-12.

New Zealand then tied it up with three-and-a-half minutes remaining. The USA had possession at midfield, awarded after a not-releasing penalty in the tackle. But some indecision put Lauren Doyle into contact with insufficient support, and the Black Ferns quickly poached. One pass off the ruck put Williams into a big gap and easy try, 19-all.

Emba secured the restart and the USA stayed calm while trying to get out of its end and weather the New Zealand press. Thomas checked the Black Ferns’ confidence, stepping well enough to commit the outside defender and then quickly got the pass to Kristi Kirshe. The reserve, who has been clutch this whole tournament, had the legs to beat everyone to the corner. Kelter’s conversion hit the far post and bounced over, 26-19.

There was one second left when the USA sent the last restart in the air, and a not-releasing penalty aided the Black Ferns’ cause. Baker attempted to take on Kelter on the sideline, and the flyhalf was not having any of that tango-style defense and started driving the power runner into touch. Baker fed the ball back inside before tumbling into touch but a penalty followed and Heavirland tapped and kicked to touch to end the game.

The USA continues onward at 10:20 p.m. PT against Canada, which bettered Russia 17-14 in the Cup quarterfinals.