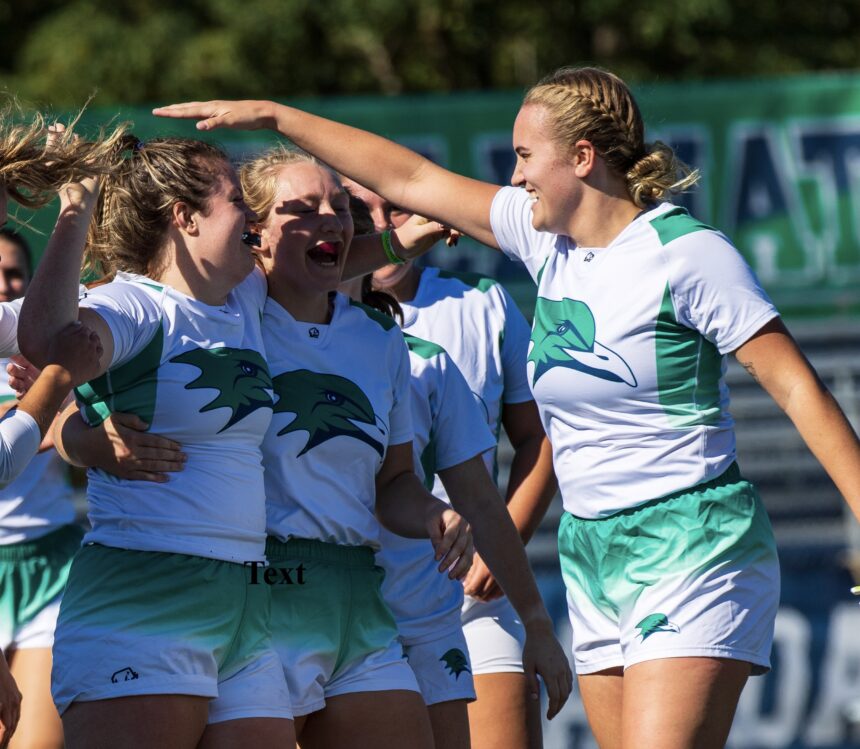 The National Collegiate Rugby (NCR) Small College 15s National Championship is down to four women’s teams after this past weekend’s Round of 16 and quarterfinals. The quartet hails from Massachusetts, Michigan, Minnesota and Tennessee, and will meet in Houston, Texas, for the semifinals and finals on Dec. 3-4. [Lead photo: Mazzie Hinsdale]

The national Round of 16/8 (aka, regional championships) occurred at four locations around the country. In Wayne, Neb., Northern Lights champ College of St. Scholastica won both of its games and will be a fresh force in the national semifinals. The Duluth, Minn., team knocked off Pittsburg State 87-0 on Saturday, while Great Lakes runner-up Univ. Chicago (also the reigning NCR Small College 7s National Champion) downed MSU Moorhead 47-17. On Sunday, Scholastica built a 24-19 first-half lead against Chicago before sealing a 45-36 win and berth to Texas. In the consolation round, Moorhead beat Pitt State 36-25.

Scholastica will face Lee University on Dec. 3. The Flames, as well as Northern Michigan, return from the 2021 semifinals, but as head coach Chris Martin explained, Lee is a very different team this year. In Culpepper, Va., Lee faced Upstate New York runner-up St. Bonaventure in the Round of 16 and won 31-10. On the other side of the bracket, EPRU champion East Stroudsburg bested The Citadel 41-12. On Sunday, Lee took the quarterfinal 36-17 and will represent the South Atlantic conference in Texas. The Bonnies ended the weekend with a 58-0 against Citadel in the consolation round.

Two of the closest games of the weekend occurred in Beverly, Mass., and host Endicott College was involved in both. The Gulls went through a tough Colby College (Rugby Northeast) in the Round of 16, winning 27-14, while SUNY Cortland pulled away from Salve Regina in the second half for a 95-14 win. Sunday’s quarterfinal was a rematch of the 2021 quarterfinals – a game the Peace Frogs won 34-10 – and it was the Upstate New York champ that took a 22-19 lead into the break. The intensity continued throughout the second half, but Endicott had the legs for a 31-27 comeback. The Colonial Coast champion heads to Houston and will face Northern Michigan in the Dec. 3 semifinals. In the consolation round, Colby duked out a 17-3 win against Salve Regina.

Elkhart, Ind., was home to the Midwest regional championship, and the Round of 16 saw two shutouts. Northern Michigan beat Great Lakes’ Calvin University 64-0, and EPRU runner-up York College topped Baldwin Wallace 54-0. The Great Waters champion didn’t slow on Sunday, beating York 49-5 in the quarterfinals. In Northern Michigan’s previous four games – which includes the Great Waters playoffs – the team has allowed at most one try against. In the consolation round, Calvin built a 28-0 halftime lead against Baldwin Wallace before the game was called.

The four semifinalists now have three weeks to heal and organize for Houston, Texas. Stay tuned for previews.