Women’s rugby was the first sport to hold its Armed Forces Championship since Covid-19 disrupted regularly scheduled competition, and the All-Army team took home top honors. The five representative teams named a champion among themselves on June 25-26, and then merged with the civilian teams competing at the Cape Fear 7s to name an Elite division champion.

Army won the first-ever Women’s Armed Forces Rugby Championship in summer 2019. The year ended impressively as the Air Force Academy and Naval Academy featured in the DI fall 15s championship, and the Coast Guard Academy finished runner-up in the DII competition. An exciting opportunity to play Australian and New Zealand defense forces was all ready to arrive in Glendale, Colo., and then Covid-19 shut down operations in March 2020. 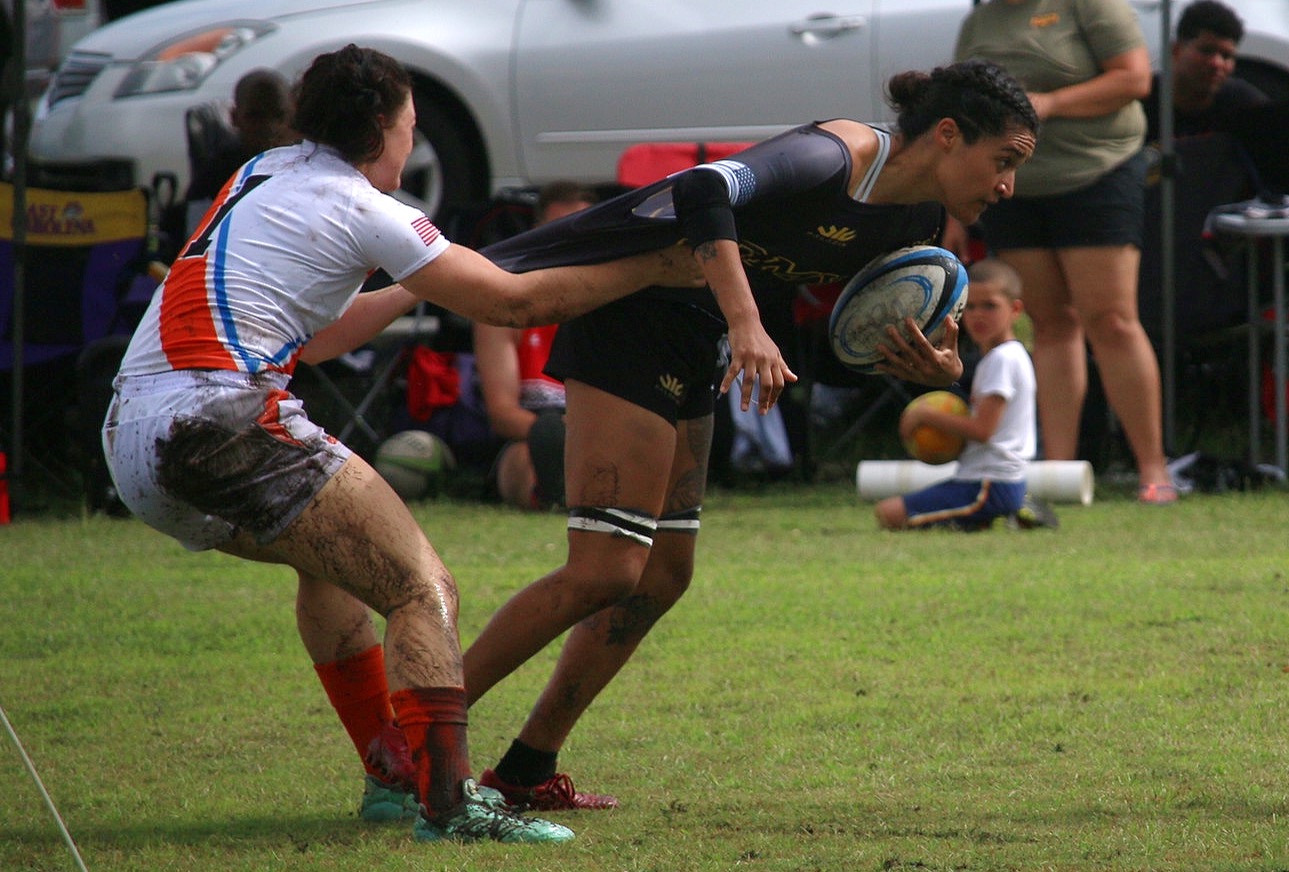 Fast-forward a year, and the women’s rugby community was able to get its championship reinstated for 2021. According to All-Army head coach Kaitlyn Kelly, the accomplishment was the result of many people’s efforts and the willingness to take on the scrutiny and red tape to make the event happen.

“That was just fantastic in terms of when a group of players comes together [for an all-star-type event], you have seven days to teach a system, get them reps, and then reps with each other,” Kelly said. “So we had that foundation coming in.” 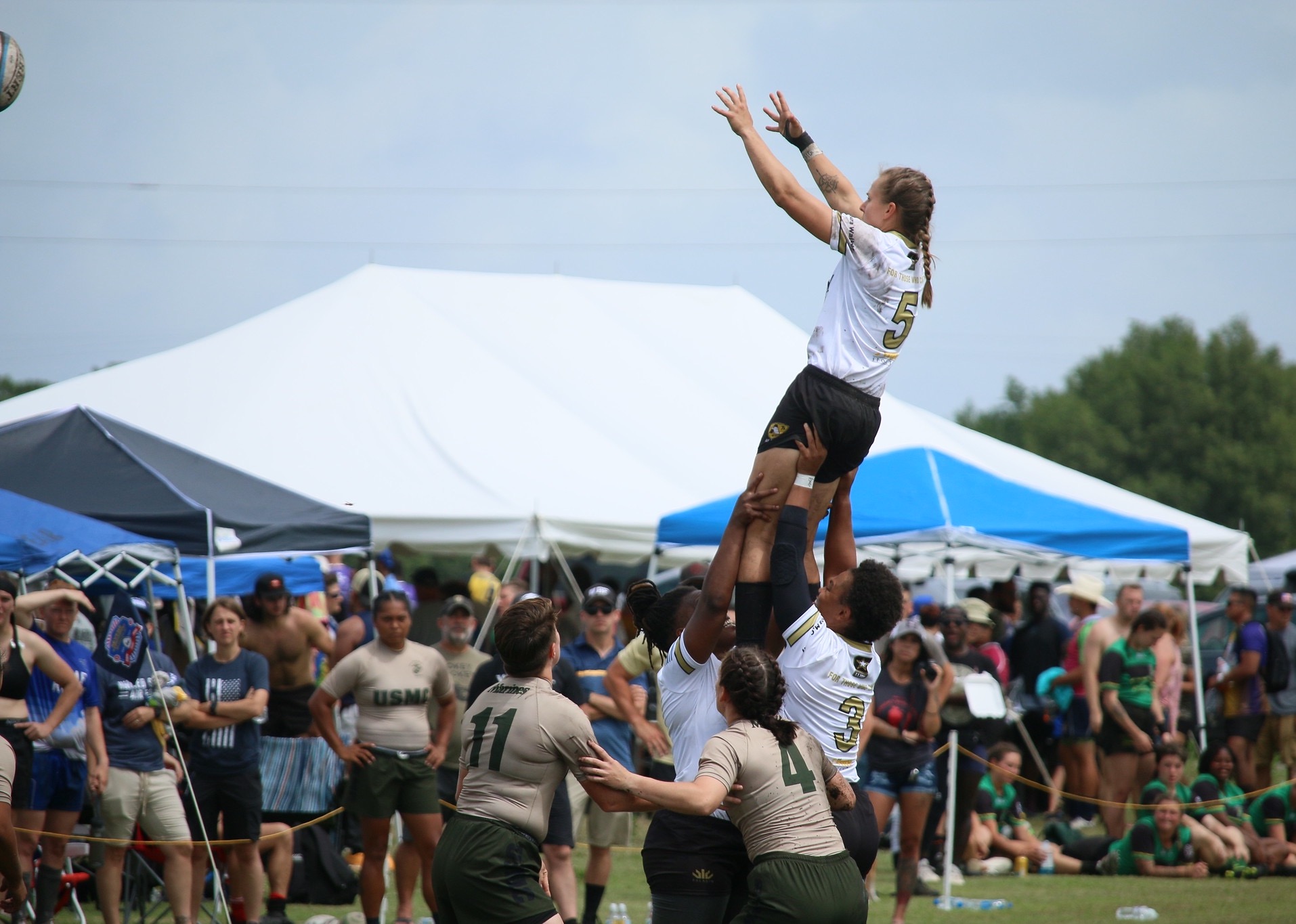 Kelly is the assistant coach for the West Point women, as well as Armed Forces 7s head coach. She built out the roster with players she had seen play at the U.S. Military Academy, others who had submitted film to be considered, and another two players through trusted coach recommendations.

“On a team like this, you’re going to have a lot of Type A personalities, because we’re in the Army and that leadership is just part of their job,” Kelly said. “It’s amazing that they’re able to turn it off for 10 days and follow and be led by their peers. They have to swallow that pride and know the reason why we don’t want too many cooks in the kitchen. Ultimately it’s because we want to win. So everyone we selected fit seamlessly into what we were trying to do and the foundation we had.” 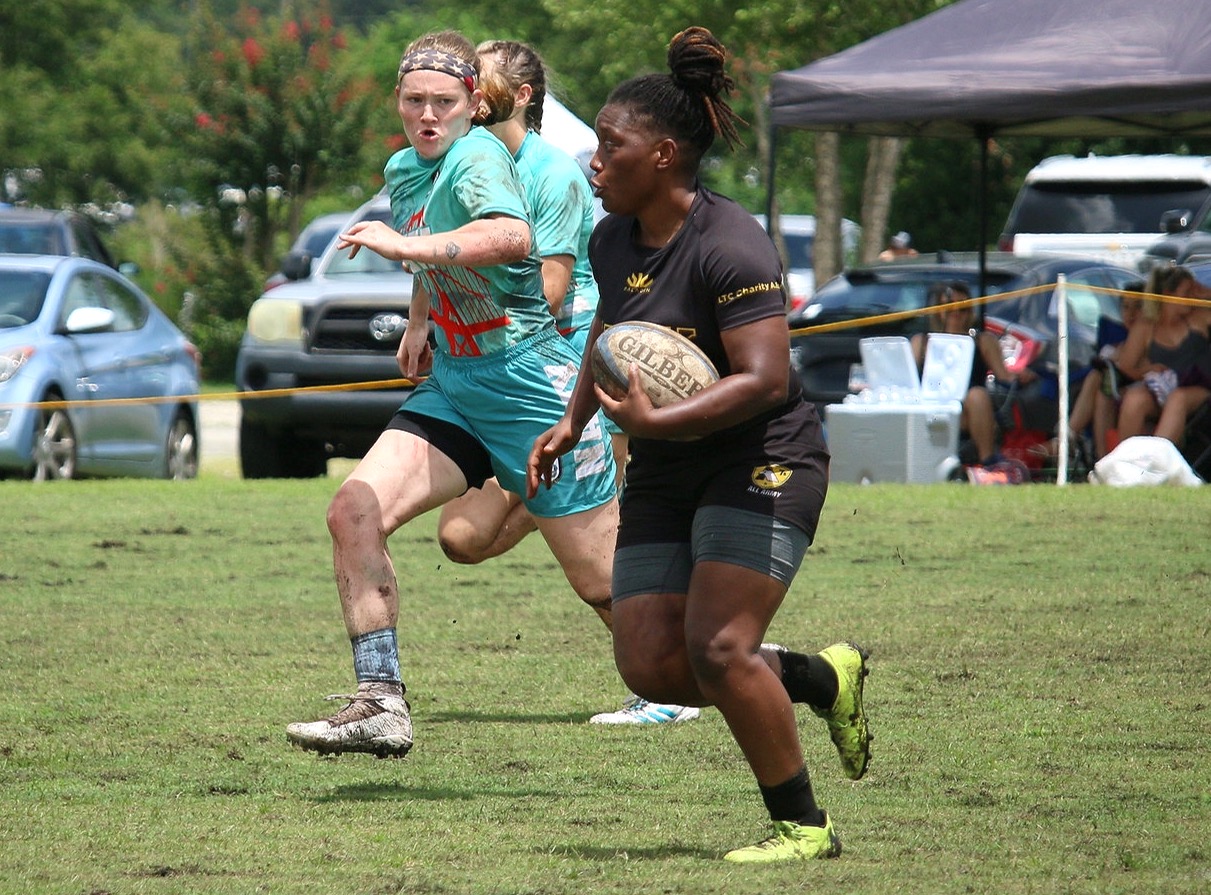 Kasey McCravey had served as team captain for the 2019 title run, but the WCAP athlete was readying for Tokyo, Japan, as a traveling reserve for Team USA and the 2020 Olympics, which kicks off next week. It was a tough absence to fill, but Myers had served as co-captain during McCravey’s tenure and transitioned nicely into that lead position.

“[Danielle] Deshaies stepped into that role, too,” Kelly said. “She was coming off 18 months of company command, so she was fresh in the mindset of leading and taking charge. And then there are those who don’t have the title but always step up. Lauran Glover is an individual whose presence really sets the standard for how we want to play and how we want to be as a team. 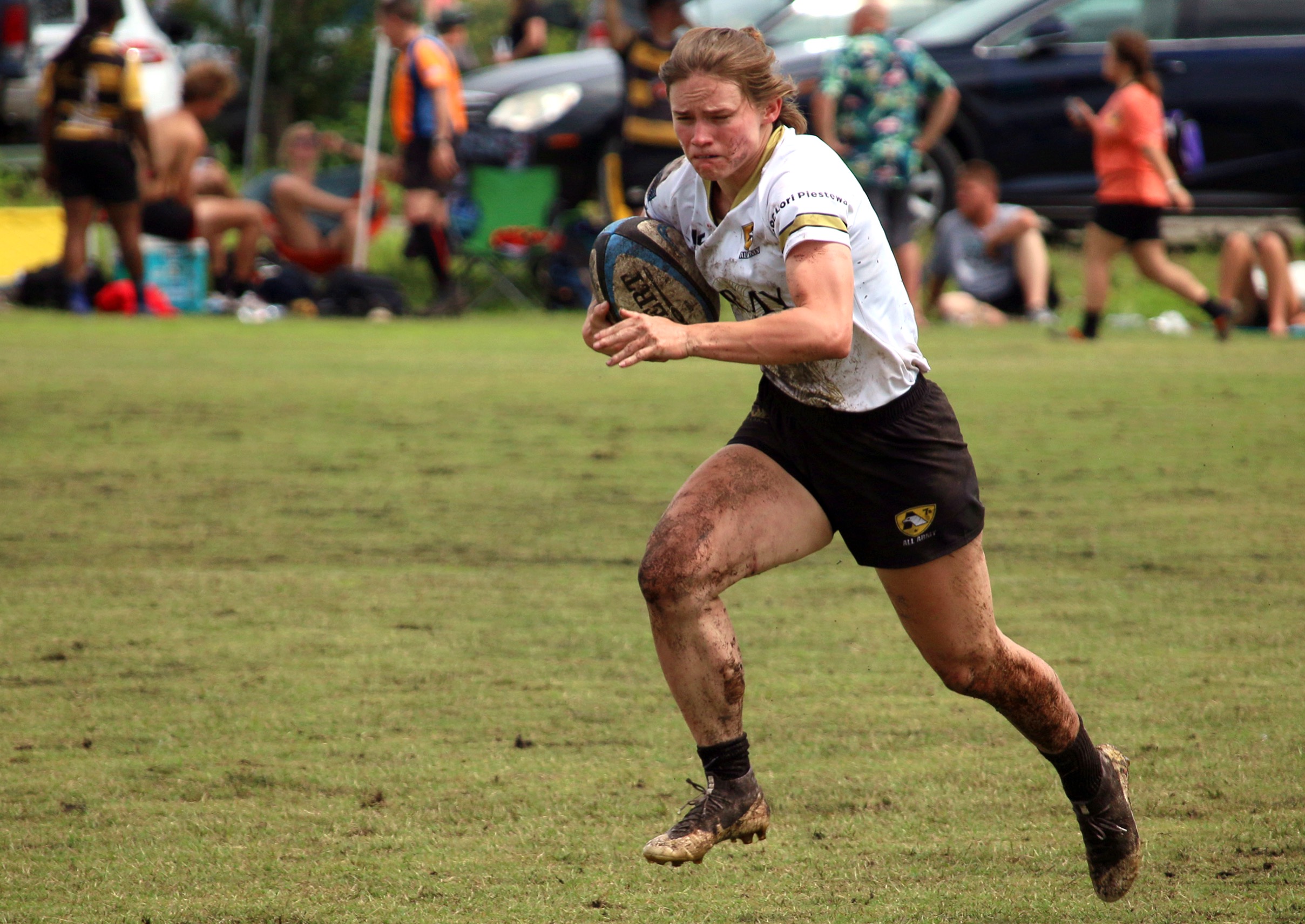 “I’m really excited about Sam Sullivan,” the coach said of some newer faces. “She was a West Point grad in 2020 and came from USA 7s camp right into our camp. Through all of her accolades through college and the ability she has to be in the next Olympics just based on her talent alone, she still came in extremely humble and helped the rookies with drills and systems we were running. She actually taught me some things and brought some drills from USA camp and put them into our practice sessions. That was pretty cool.”

The All-Army team held a week-long training camp at Fort Bragg and had access to all of its facilities and MWR offerings. Two physical trainers with rugby backgrounds oversaw the team’s S&C and recovery, adding to the professional environment. Aside from readying for the tournament, Kelly wanted to set expectations for those newcomers who were experiencing elite rugby for the first time. 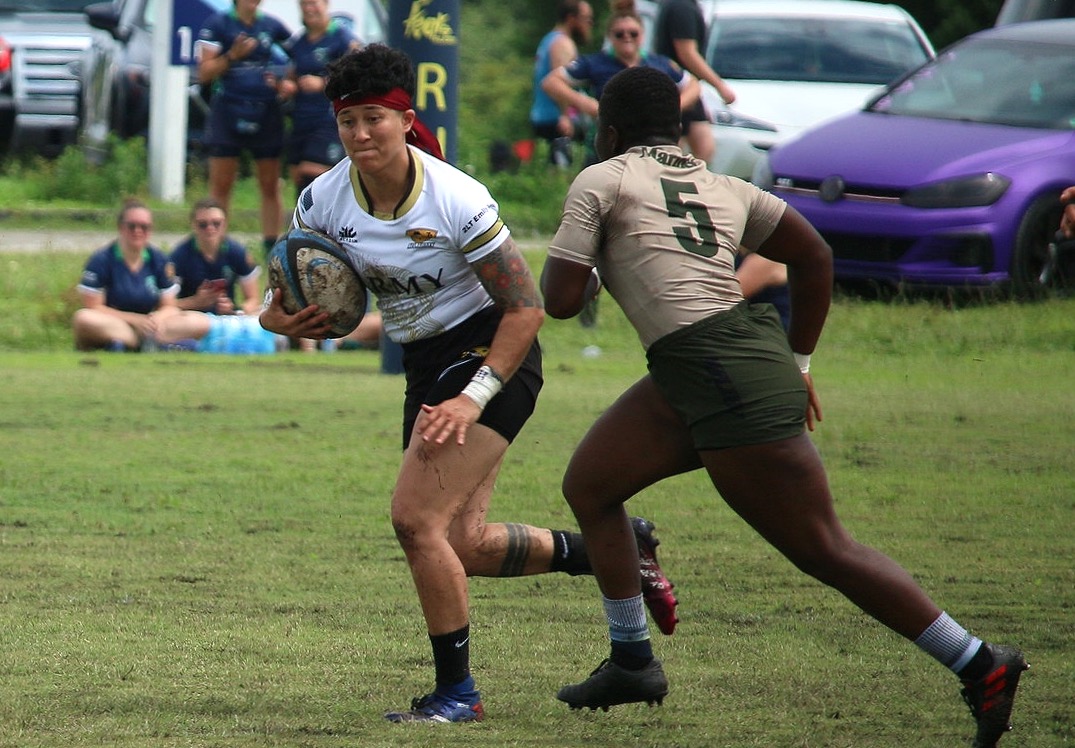 With five service branches providing teams, the tournament is round robin style and the champion is named on final standings. Like 2019, Army and Air Force faced each other for the first round of play on Friday evening. And just like 2019, a torrential downpour coincided with kickoff. Air Force scored first, and then Army rallied for a 19-5 win – same as 2019.

It also rained during Army’s match against the Marines, which were low on numbers but persevered through some seriously strong individuals, per Kelly. The Marines suffered a freakish injury approximately 30 seconds into the match and a long break followed.

“They came back firing on all cyclinders. They were playing for their injured teammate, and it was incredible,” Kelly said. “We played a lot of defense and won that game by one try.” 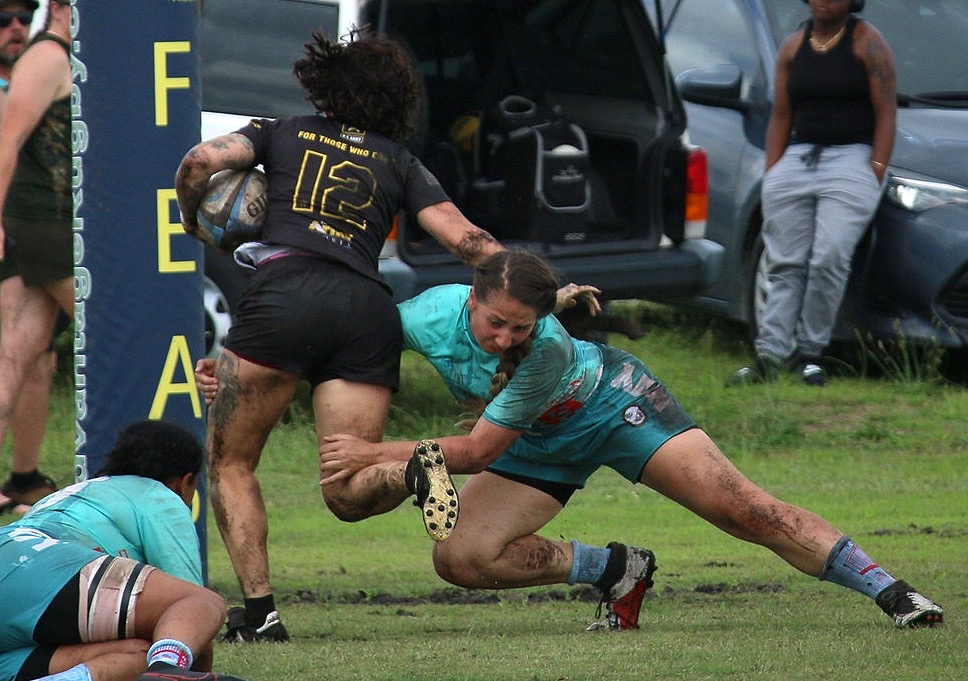 Army beat the Marines 5-0 and also defeated Coast Guard 27-0 and Navy 32-0 to go undefeated and win the championship.

“I truly believe everyone we played their best game against us, and that’s what we want,” Kelly said. “We want to be the best by playing the best. And it shows the legitimacy of the athletes and their teams – that’s what it’s all about.”

Saturday ended with a trophy ceremony and the naming of an all-tournament team (see below). And then the entire field readied for a third day of competition, mixing into the Cape Fear 7s Elite competition and civilian clubs. On Sunday, Army defeated Coast Guard and Navy to advance to the final, while defending champion Scion worked through its side of the bracket for the title match. 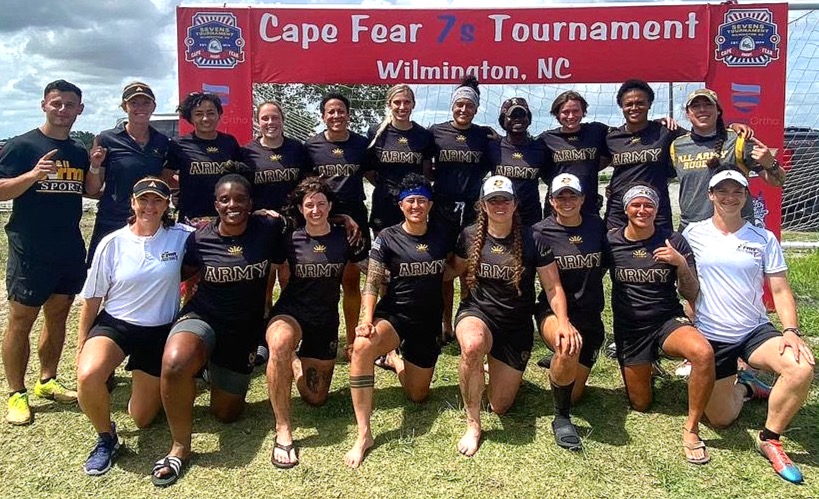 “It could have gone better,” Kelly said of the loss to Scion. “I will say we started a little bit flat, whether that was from nerves or being tired. But I am very proud of how we came back in the second half. We finally started to play the game they had been playing all tournament, and we held Scion scoreless. It’s a testament to their grit and determination, to pull themselves out of a rut they found themselves in at half. They’re tenacious.”

“But you have to hand it to a team like Scion,” said Kelly, who coached with the academy when stationed full-time in D.C. “They have the opportunity to practice and play every day in the summer, and they’re a bunch of athletes and national team players and college all-stars. Scion is a great program, and we love playing them and seeing how we match up.”

Looking ahead, the All-Army team is looking to add more tournaments to its schedule and will be sending 1-2 teams to Freetail 7s, the New Year’s Eve tournament in Austin, to start. There’s also a push to have more games against other service teams, and then ideally, against international counterparts.

The Marines are to organize the 2022 Armed Forces Championship, so stay tuned for logistical details. 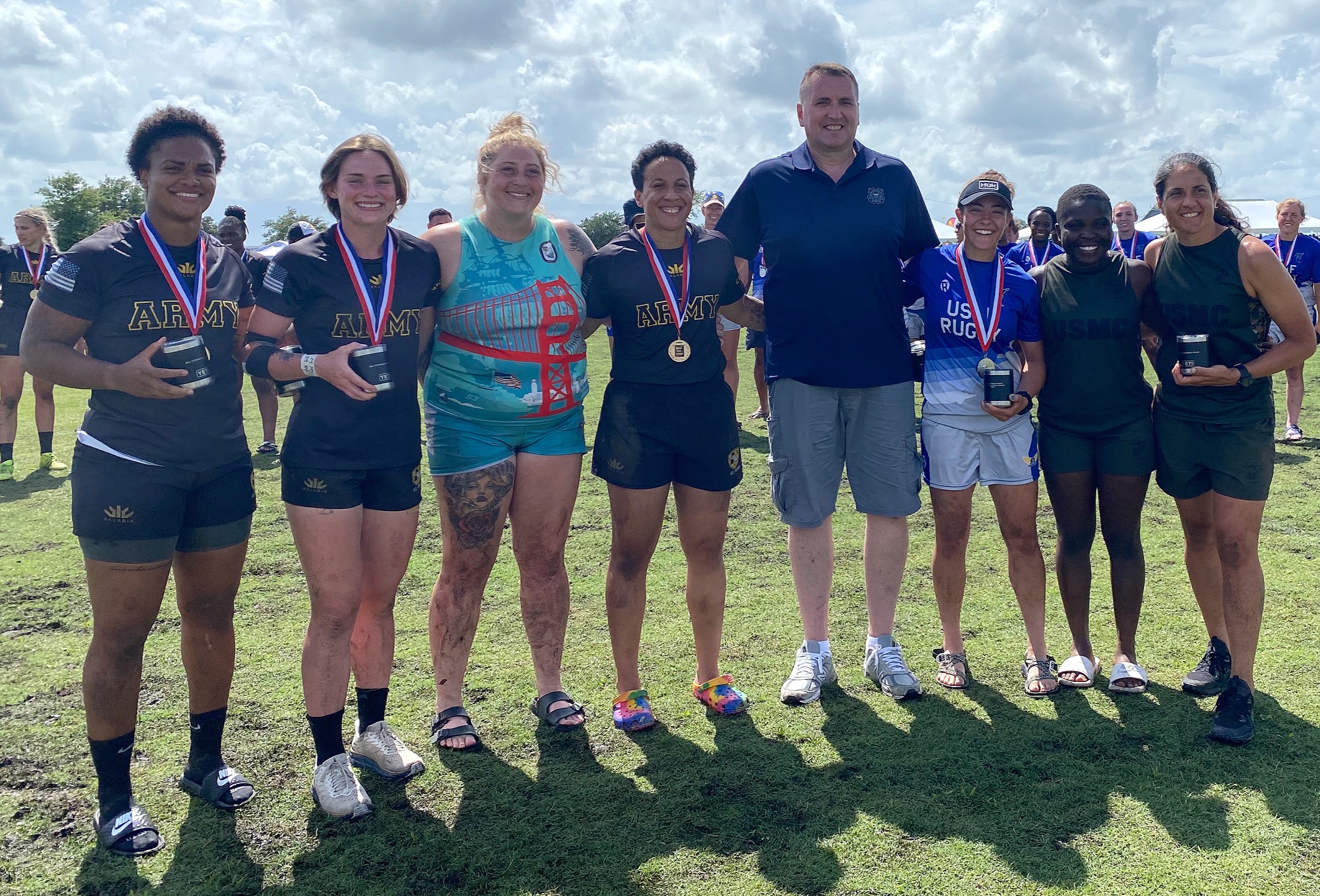 (From left-right in above photo)