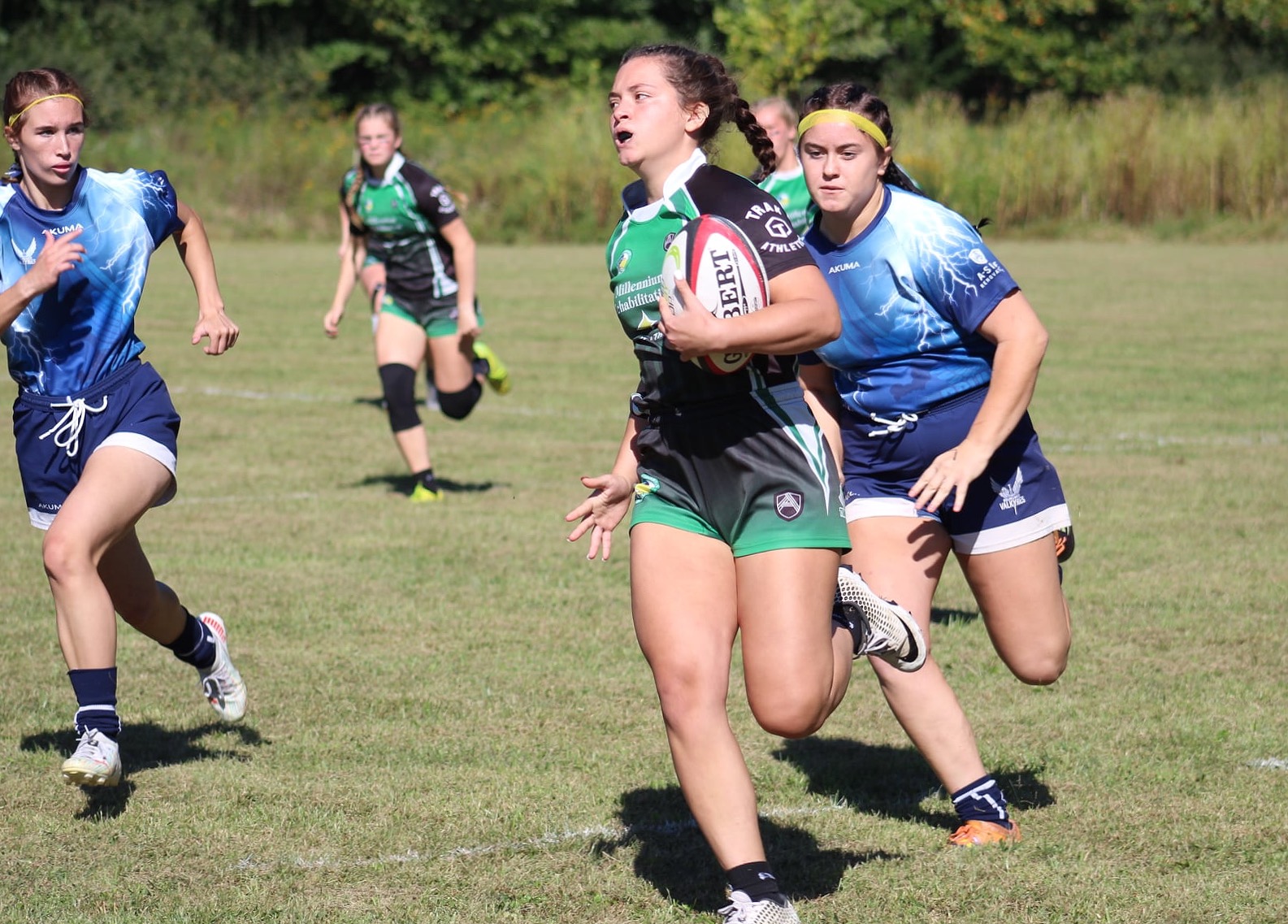 Highland won all three Rugby Ohio 7s divisions this fall. Together, the program went 47-5-1, winning the Competitive championship and finishing atop the Festival 1 and Festival 2 competitions. The top side won its first-ever state 7s title, and equally impressive, the festival teams were playing other school’s first sides. The Buzzards have numbers, momentum, and now trophies.

Seniors Gaby Miller and Emily Perhacs, junior Maria Bennett-Gandini and sophomore Ruth Musser directed the success of the team this year. Miller, who stood out all season long, had no 7s experience heading into the fall, but that was the case for the majority of the squad. Miller herself has had a short career. She has a background in basketball and then started cross country freshman year – when she also discovered rugby.

“My parents said, no,” Miller said of her first attempt to join the team. “But they had time to warm up to it and let me play my sophomore year.

“I like rugby because it’s more of a culture sport,” she continued. “With basketball, there are a lot of cliques. If you weren’t the fastest on the team or you couldn’t make the most baskets in a game, then you’re an outcast basically. In rugby, we need everybody. We need a group of people with different skill sets that can do different things. We don’t always need a bunch of really fast runners. Sometimes we need bigger players who can make hard hits. Really, you need everyone.”

Covid-19 limited her sophomore season, so Miller didn’t experience a full season until the spring of her junior year. Spring 2021 was also a breakout season for Highland. 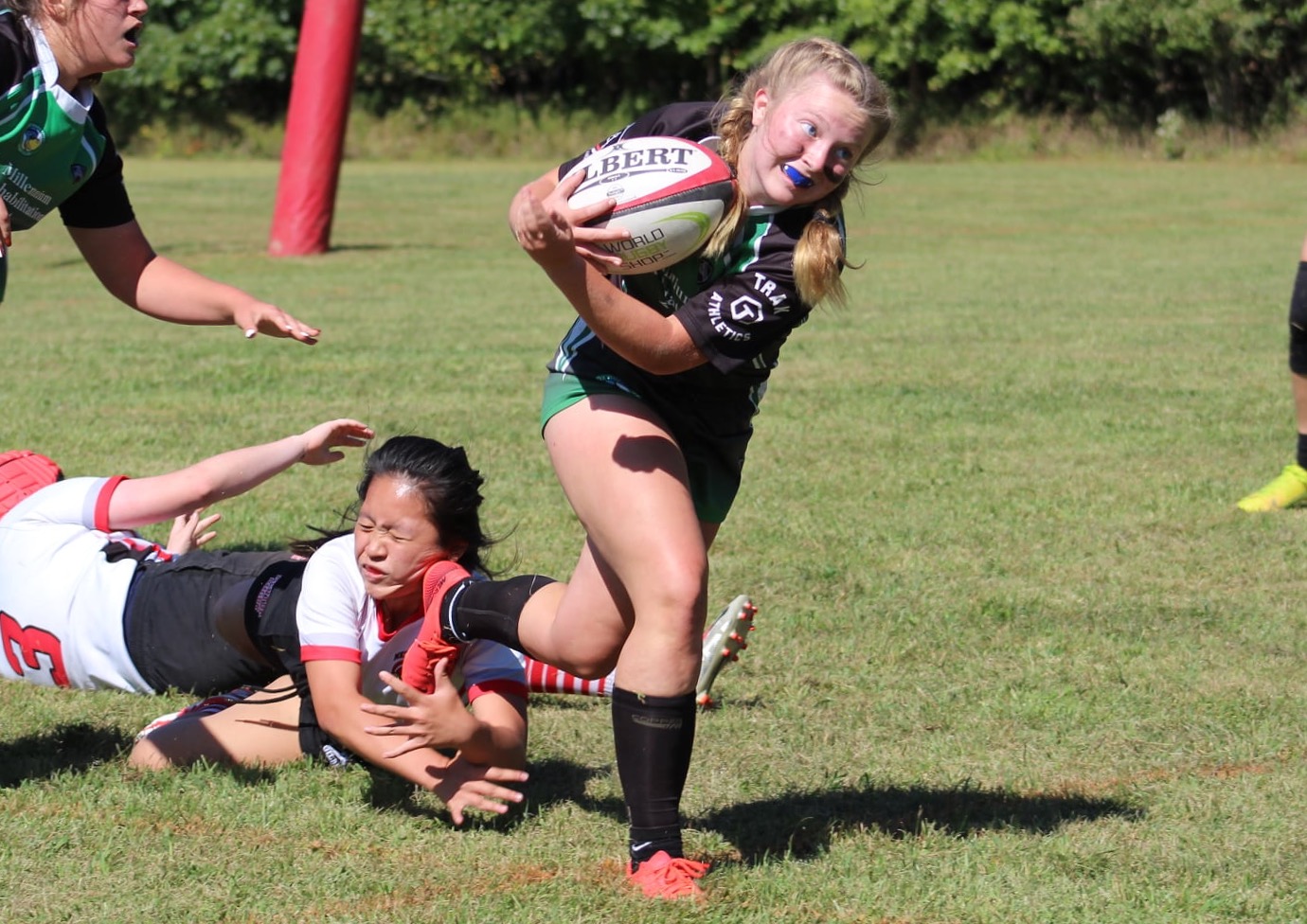 “I’m usually in the backs,” the inside center said. “But I’m also looking to maybe become a flanker. One time I was thrown into the forwards and I didn’t’ know what was going on. But I want to see the game from their perspective, so I can be a better player overall.”

Miller noted a lot of positive momentum from the previous spring, and that enthusiasm was also reflected in the numbers. Middle schoolers were graduating into the high school ranks and eager to join the movement.

“We were just excited to see what would happen,” the captain said of fall expectations. “There was some talk about championships, and it was our end goal, but coach [Dave Sambor] wasn’t running practices like a drill sergeant. Basically, we were learning to love and understand rugby, and having fun on the field. When it’s fun, the game flows better and that leads to wins.” 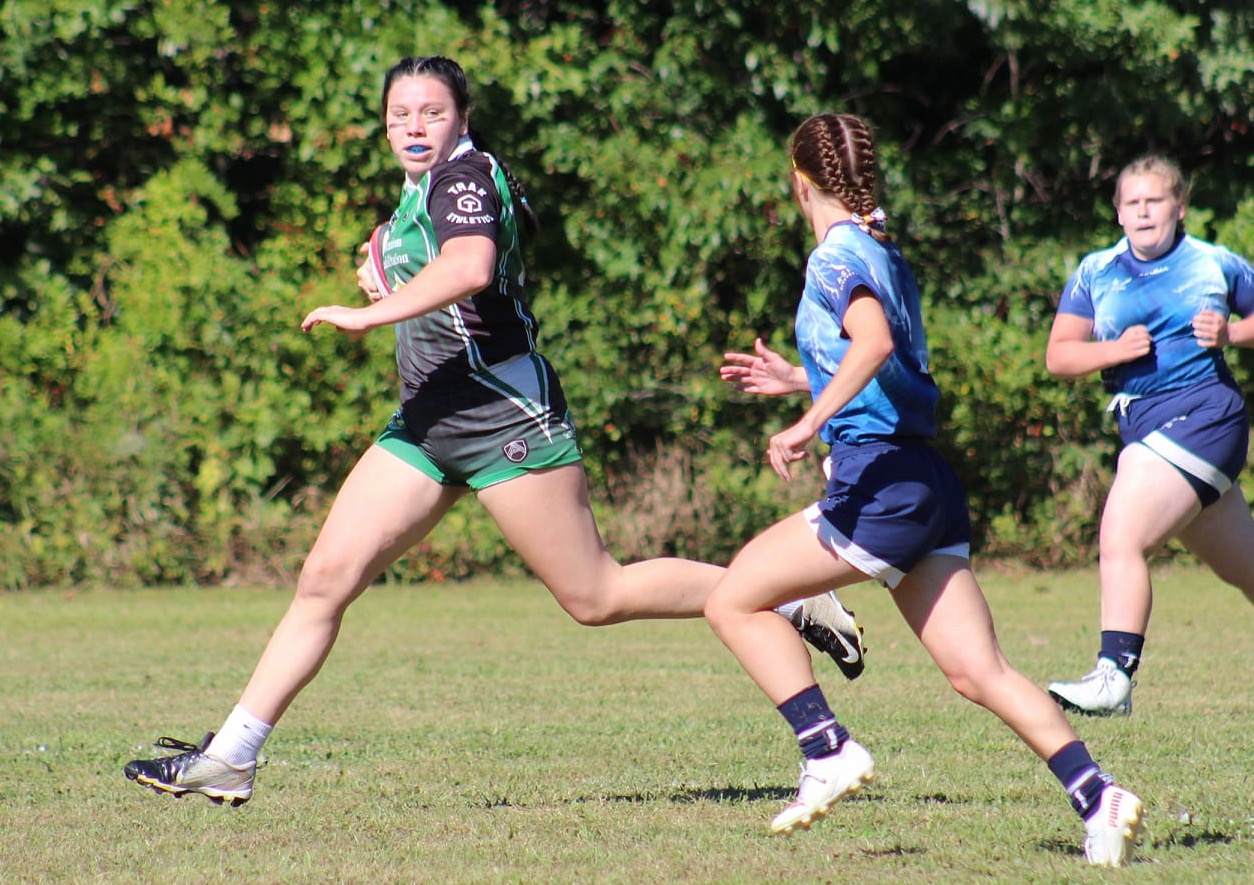 The Rugby Ohio fall 7s series supported three competitions – Competitive, Festival 1 and Festival 2 – and Highland supplied a team to all three divisions. Only five teams featured in the Competitive bracket, meaning other teams’ first sides were playing against Highland’s B and C squads.

“Our first game in our first tournament was against Brunswick, and we came into that game a little scared, because they were the only team we lost to in the [spring 2021] 15s season,” Miller said. “For our starting team, we hadn’t actually played a full game of 7s. We only watched film on how to play and had some touch practices of 7s.”

“Going into that and being able to win, we realized that we can do this, actually,” the captain continued. “It definitely did set the tone for the season. We showed that we were ready for the rest of the fall and no one was scared about never having played 7s before.”

Rugby Ohio hosted five series tournaments before the Nov. 7 championship, and Highland’s first team won all of its regular-season games save one. On Oct. 17, Highland dropped a 19-12 decision to Brunswick. 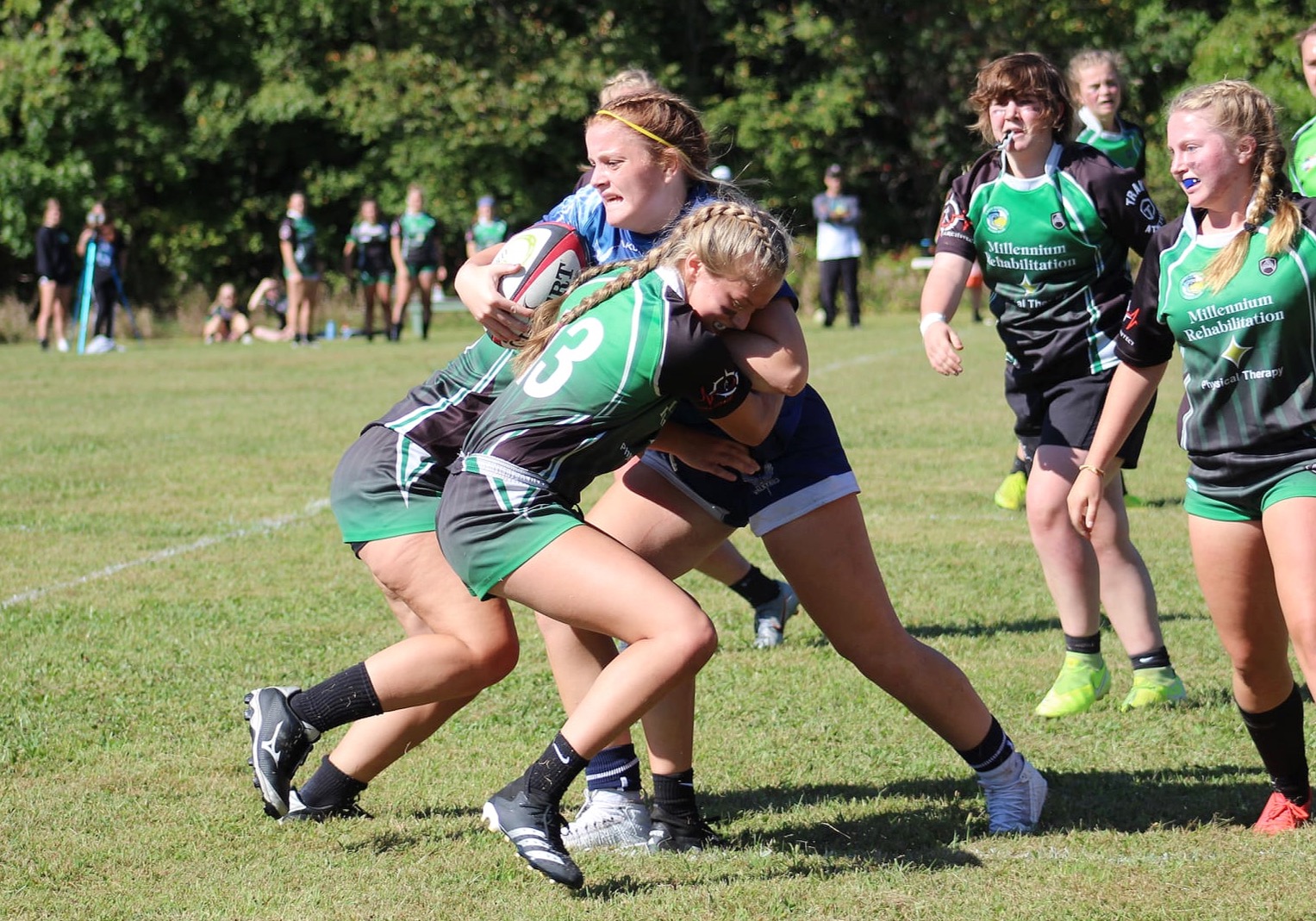 “That was a very important game,” Miller said of staying mentally sharp. “Our team’s always hungry for the opposition and ready for a good game, but that game showed us that we’re not invincible. Just because we’ve won all our games until now doesn’t mean we can’t lose. It kept us ready for the championship because we knew they could beat us.”

The entire field assembled on Nov. 7 for the Rugby Ohio 7s championships. The Competitive bracket started at the semifinal stage, and Highland opened with a 34-7 win against Hudson. Meanwhile, Brunswick bettered Mentor 24-10 for the final’s berth.

“Our coach had told us that it would be nice if we won but he wouldn’t be mad if we didn’t,” Miller said. “But for the top seven players, it was: We have to win. We wanted to win it for our coach, because he knew we could do it and we wanted to make him proud.”

Miller indicated that final had a difficult start, as a Brunswick player was injured early on and had to be carried off the pitch.

“There were just a lot of emotions and we played the best we could,” Miller said. “But a lot of people came out and gave their best performances of the season.” 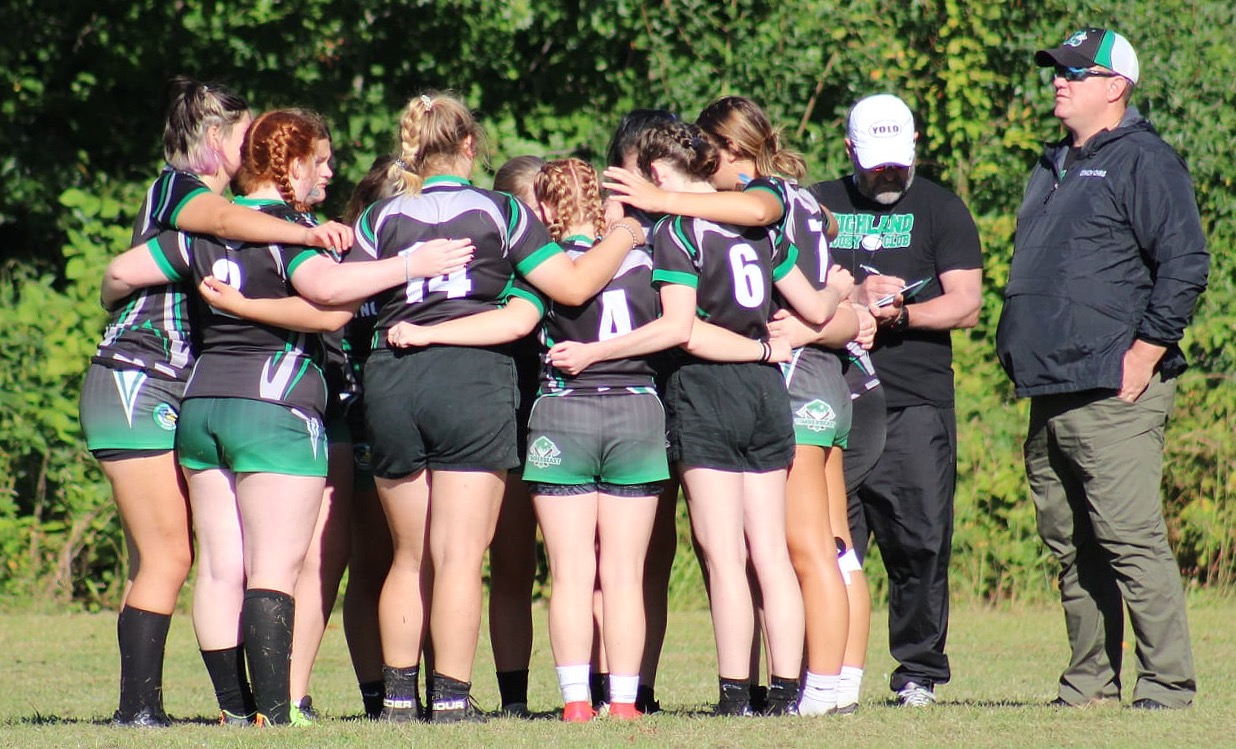 Highland won 29-0 for a convincing win and Rugby Ohio 7s championship title. The Festival B team went 3-0 at the final tournament, defeating John Marshall 28-15, Cincinnati Walnut Hills A 24-19, and Mentor B 24-7 to finish atop the standings with a 17-1 record. The Festival C side beat Cincinnati Walnut Hills 30-17, Brunswick C 20-5 and Brecksville Broadview Heights 24-22 to finish the season 13-3-1.

“Honestly, all of us were able to grow together this season,” Miller thought on most-improved players. “We went from not knowing 7s at all and learning it very quickly. We lea
rned a lot about each other as well, in addition to new skills in general.

“We’re just a big family,” she continued. “We’re friends in school and hang out together outside of practice. We’re always together and having fun, so that helps with the communication on the field.”

More good things await, as Highland plans to tour Ireland in March 2022. Then when the squad returns, it’ll flow right into the Ohio 15s season, where the potential for new heights will be chased.