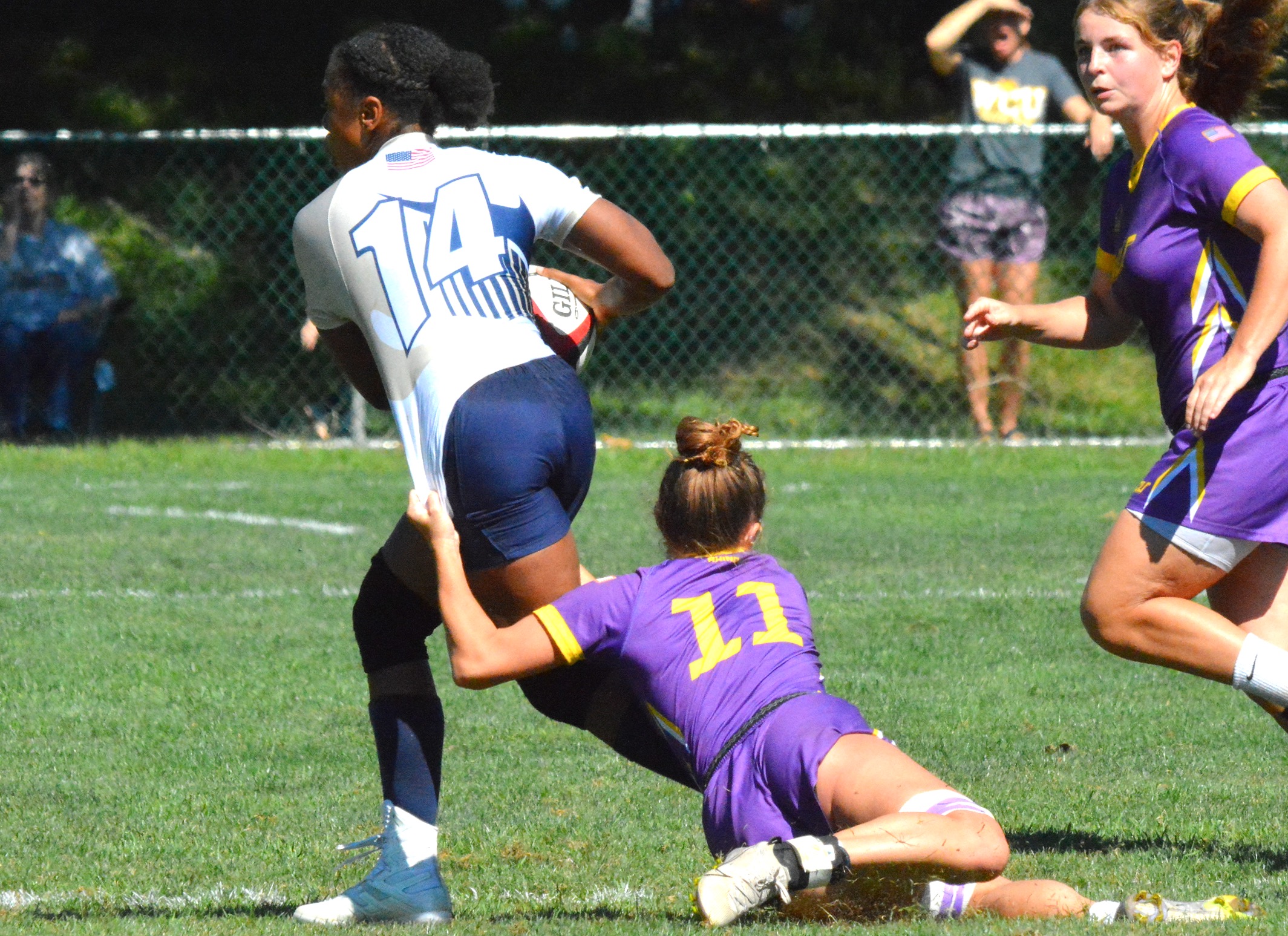 Navy is always an interesting team to follow throughout the fall 15s season. The independent program serves as a means of comparison, as it schedules teams across various divisions, conferences and organizations. And now, the field is reporting to the U.S. Naval Academy. This weekend, Annapolis, Md., hosts the eastern portion of the College Rugby Association of America (CRAA) DI fall Round of 8/4.

Navy has in the neighborhood of 60 players this fall. Head coach Murph McCarthy credited the firsties and their ability to make training both fun and challenging, especially during the pandemic year. The team was getting up early for access to the weightroom, training hard with virtually no games on the schedule, and yet players kept showing up.

“If it wasn’t that way, we wouldn’t be in this [positive] situation – twofold because of Covid,” McCarthy said of leadership’s ability to recruit and retain players. “They’re a good group. Thick as thieves.”

Leading the way are captains Sarah Skinner at No. 8 and Aimee Dalsimer in the centers. 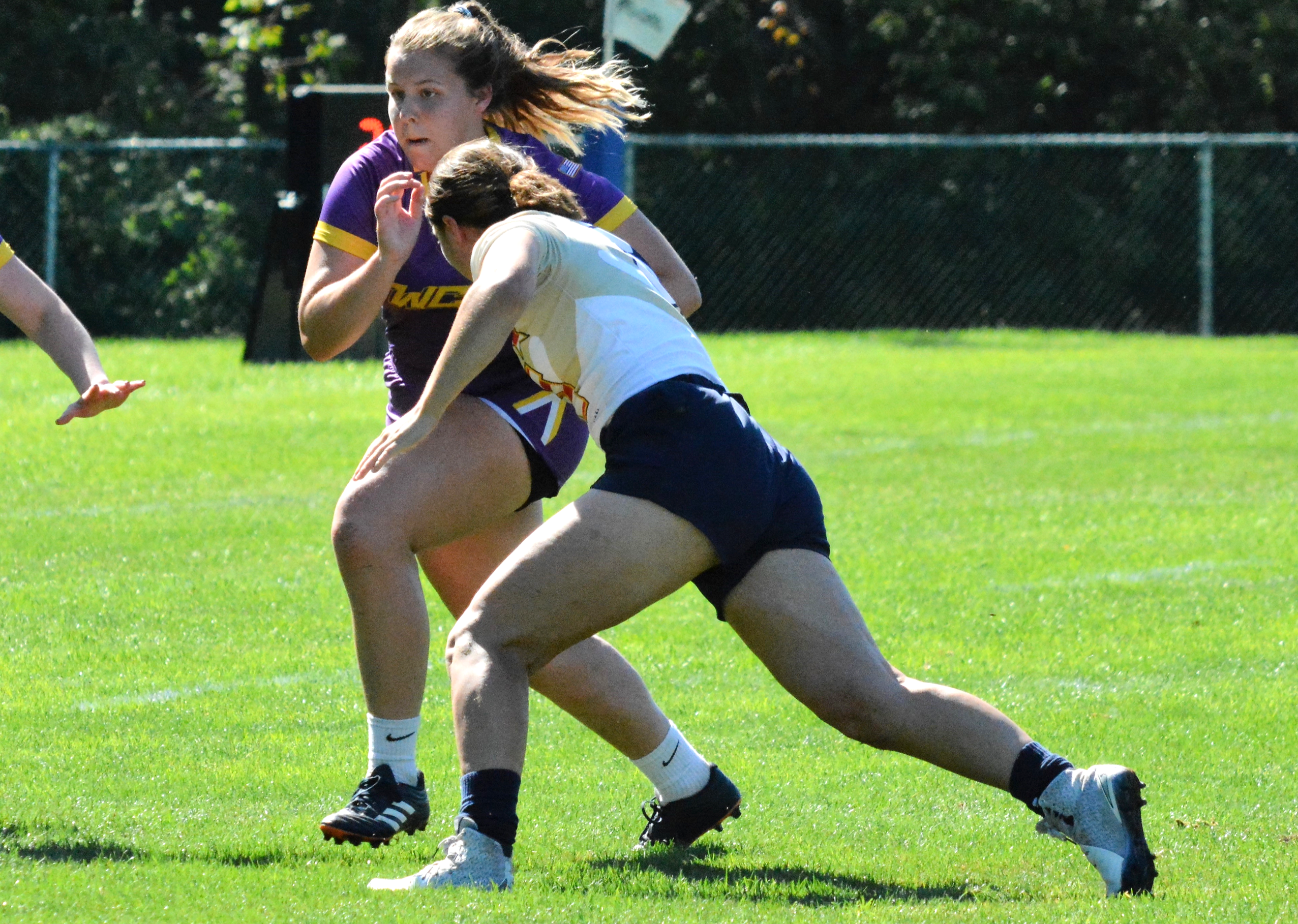 “They’ve been contributing since I started coaching the women, and they’ve stepped it up more and more each year,” McCarthy said. “Now that they’re in charge, it’s all business. Your fitness needs to be a certain level. You have a responsibility in the breakdown to support your teammate or lose the ball. They’re leaders by example. They’re not the type of player who will give a 10-minute speech after practice or the game. They just work hard and it ups everyone else’s level.”

The team gained 20 players, per McCarthy’s estimate, who are totally new to the sport.

“With our numbers we’re able to scrimmage every afternoon,” McCarthy said of expediting the newcomers’ education. “We can break into four big groups instead of two, too. You can make practice more dynamic, and that also helps retention.”

Freshman Marissa Meyer stood out pretty quickly. She originally came to Navy for lacrosse, gave rugby a try, and has been a big contributor at outside center. Sadie Eiting is another freshman who is getting varsity play, and watch for first-year Miracle Haynes as well.

“She’s an up-and-comer to keep an eye on,” McCarthy said. “She loves to tackle – she’s got that part down – and we can fix everything else later.”

The downside to a large roster, of course, is finding field time for everyone. Navy has had to send teams to different locations on the same weekend just to get games.

“Getting games on the schedule has been tough,” McCarthy said. “Teams backed out for Covid or they decided they wanted to play at home after already being booked here. B side games – wow, that’s been really tough. That’s why we have two different teams, just to get some minutes for some of our girls who are working just as hard at practice but just aren’t up to the next level yet. Once you start playing, then the stuff in practice starts to make more sense, and that’s how you get better. We’re grateful for the games we did get but we wished for more.”

The freshmen and sophomores were introduced to higher-level rugby sooner than anticipated. Military events that were supposed to take place in the 2020-21 schoolyear were postponed until fall 2021. The juniors’ class ring ceremony fell on the same weekend that Navy was supposed to play Queens, but now all of the seniors and most of the juniors were unavailable for the away trip. 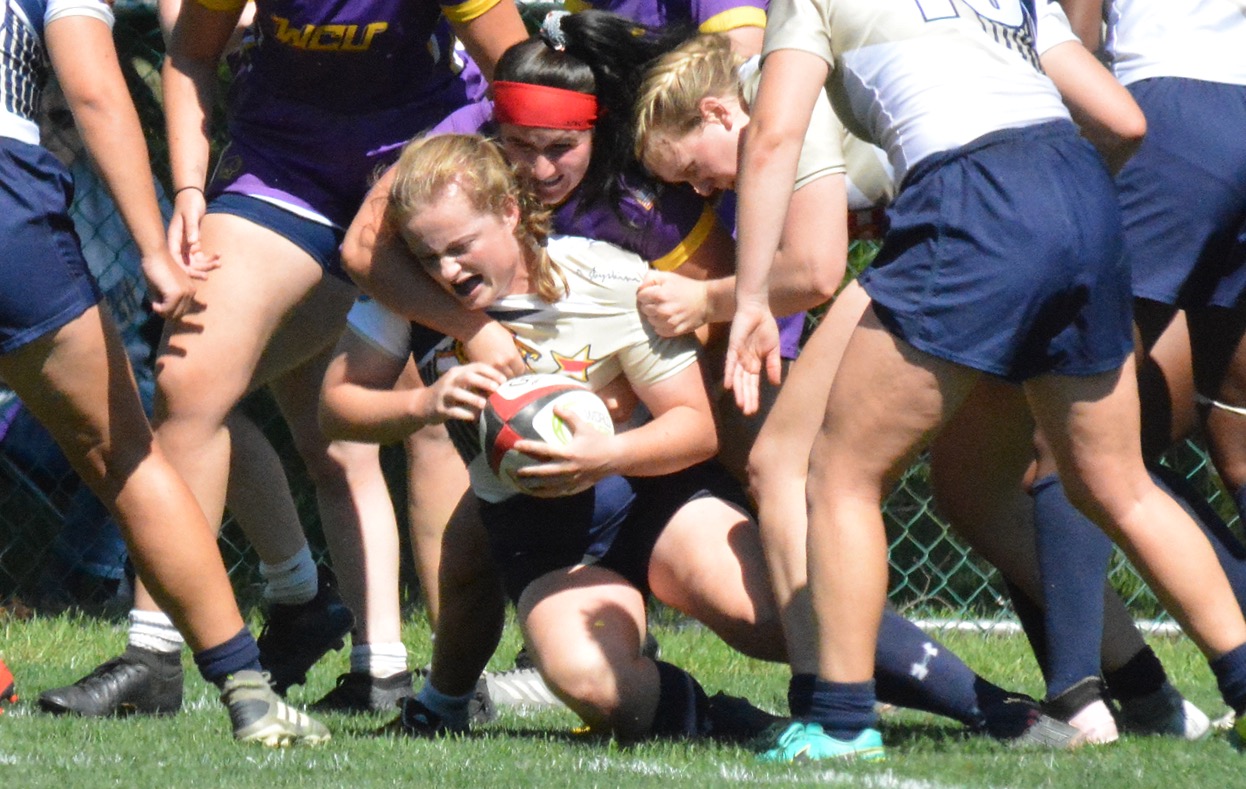 “So that was a pretty good learning experience for the younger gang because Queens is a very good team and they took it to us,” McCarthy said of the 88-0 loss. “That was a wake-up call for the whole squad. We had had some success until that point, but that made us realize we had some work to do.”

Navy then traveled to West Chester on Sept. 25, and that match ended up being a pivotal experience for the team.

“I e-mailed [West Chester head coach] Tony [DeRemer] the other day that that game has shaped our season,” McCarthy said. “They beat us by a point and played really well. Played good defense and exploited some of our mistakes. We were feeling pretty high and mighty and then went to West Chester and took one on the chin. Everyone, from the coaches on down, has upped their level since then. ‘You’re going to have to work hard for every minute you play and make sure you go over the little stuff thoroughly.’ That was huge for us. It’s one we wish we could get back.”

The game against Mount St. Mary’s, a DI NIRA institution, played a similar role in terms of the team’s development. 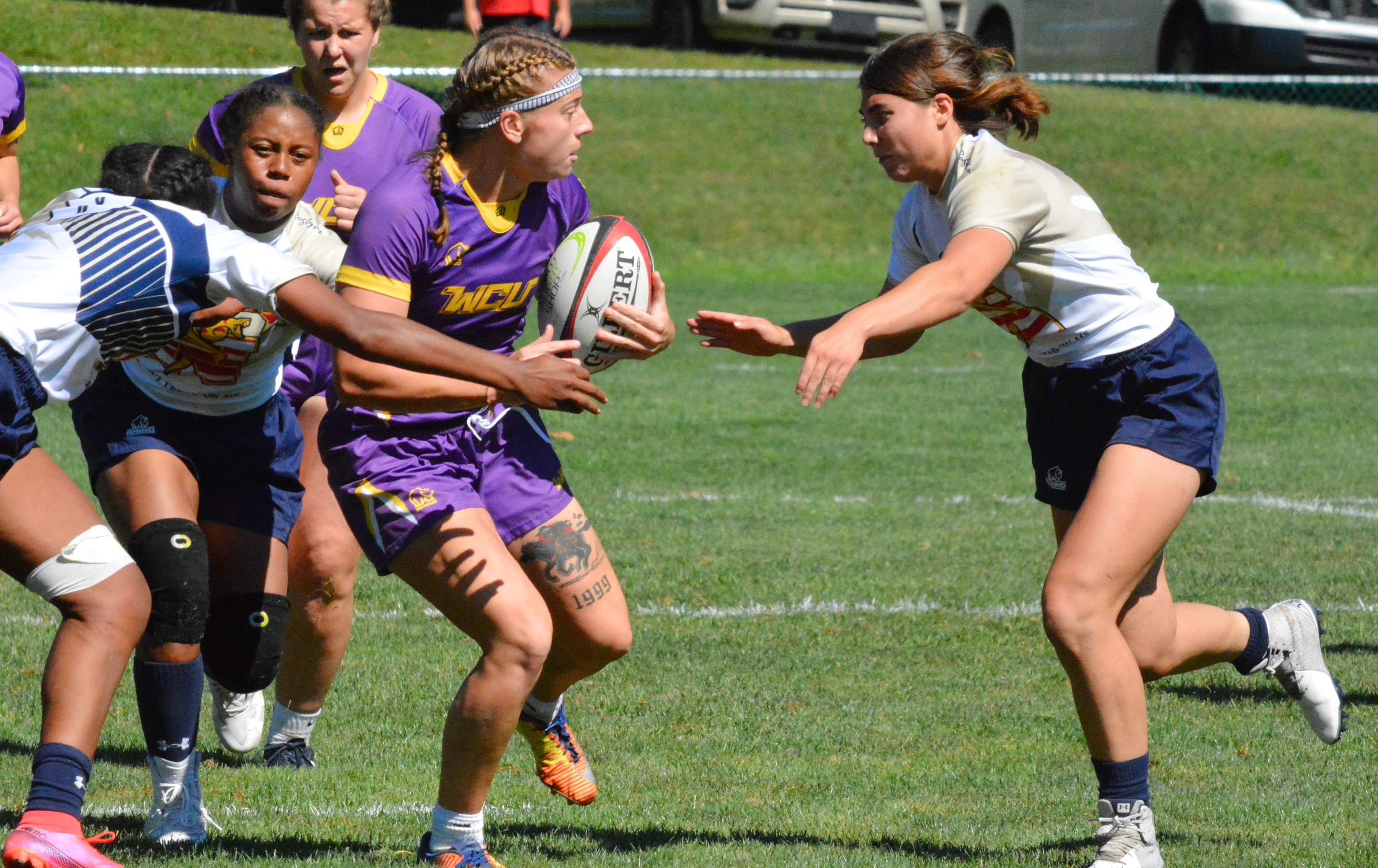 “It was kind of the same situation – back and forth match – and both teams knew this was going to come down to the last few minutes,” McCarthy compared the game to the West Chester game. “The girls were able to step up and make sure they could get the [34-27] win at home against a strong team.”

The captains have put in leading performances on the pitch, and Anna Hoang has come through at scrumhalf. She’s splitting time with Dina Giles and has been pivotal to organizing the attack and defense this fall.

“Ana [Olszewski] has had an amazing season so far,” McCarthy said of the junior. “The kicking game was something we couldn’t fix in a day – between us kicking it and catching it and bringing it back – but she has upped the level in the back three. There’s more quality
play between the fullback and wings.”

Progress came at all levels of the team.

“Our B side players have gotten a lot better this season and that has helped the A side, naturally,” McCarthy said. “They realize they can’t just do what they want on attack [during intra-squad scrimmages] or get lazy on defense because all of sudden there’s a young sophomore running down the middle of our pitch with the ball. Then it’s, ‘Hey! What’s happened here?’”

The upperclassmen were able to see these stages of development as they relate to the post-season, which was a topic of conversation throughout the fall. Navy finished runner-up to Air Force in the last DI fall championship in 2019. 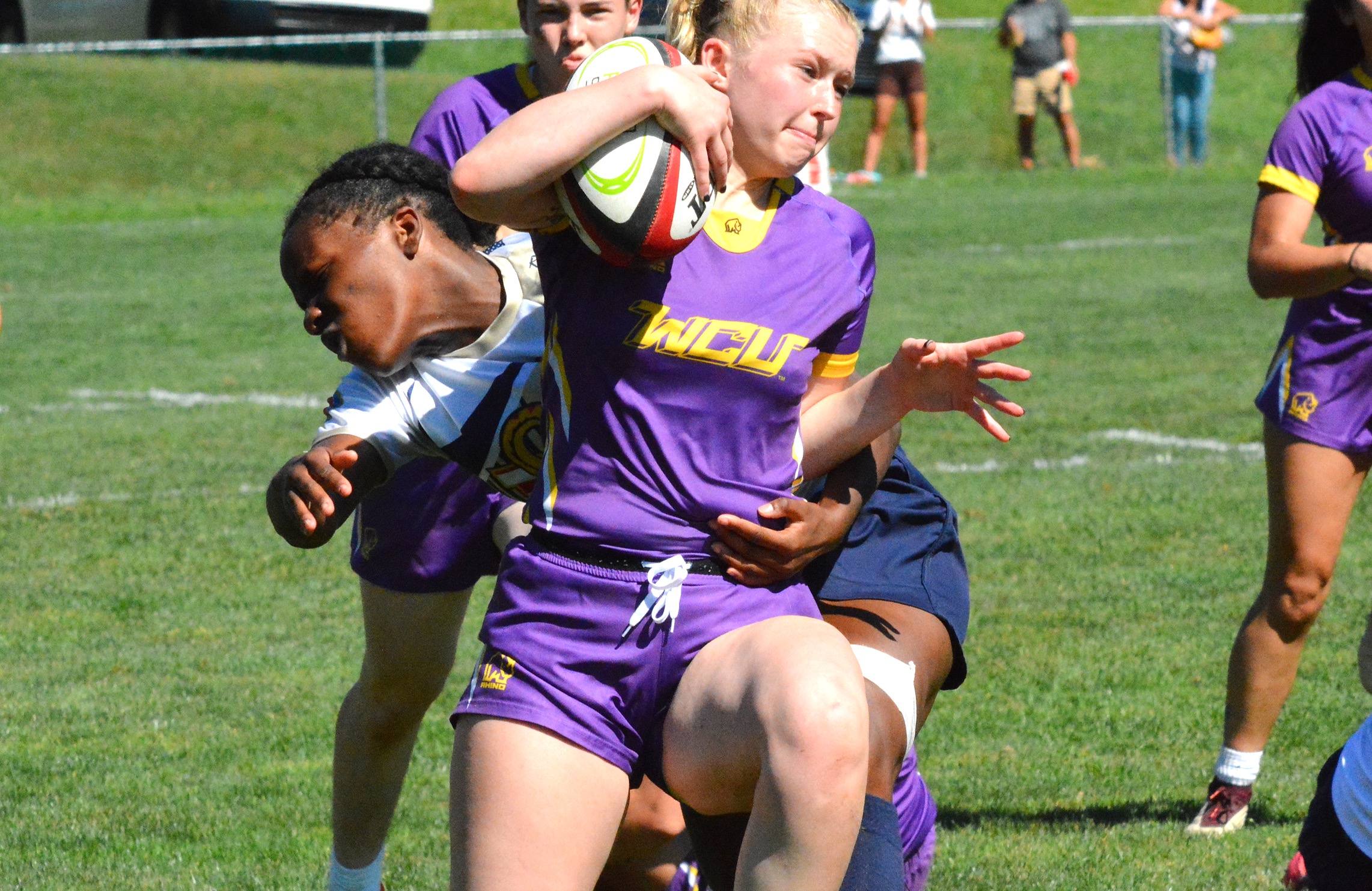 “We have a good group of firsties who have been good about saying, ‘Listen, we plan on playing in the postseason and it’s a long road to get there and there will be things we’ve got to fix along the way,’” McCarthy said. “But it hasn’t been, ‘We have to do this and this because it won’t go well when we go to playoffs.’ The seniors haven’t made it a high-pressure situation to get here, but we want to try to win the whole thing and that’s why we’re getting up early and doing extra reps.”

Traditionally, Navy has had to contest a play-in game to earn a spot at the regional championships – a consequence of being an independent program – but that wasn’t the case this year.

“We were using the term, ‘Play to get to Poughkeepsie,’ but we’re hosting this year,” McCarthy referenced Vassar College, a regular destination for collegiate playoffs in the northeast, as motivation. “We’re totally thrilled that we’ve got three teams coming to us. Our facility is magnificent – we have three pitches, a stadium, locker rooms – so we’re a good fit to host. And we’re excited to do it. I’m mean, we’re playing at home. Any questions?!”

Navy is playing UCONN in Saturday’s quarterfinal, while Northeastern and Indiana contest the other Round of 8 game for the East. Saturday’s victors will face each other in Sunday’s semifinal, and then the DI Fall Championship will occur Saturday, Dec. 4 in Matthews, N.C.

“We’re pretty pumped,” McCarthy closed. “This is what we’re been training for and hoping for. Knock on wood, we haven’t had any serious health issues or injuries, so we’re feeling pretty comfortable. That said, once you’re in playoffs, all best are off. Everyone is here for a reason.”

Shindledecker: We’re Not 1 and Done