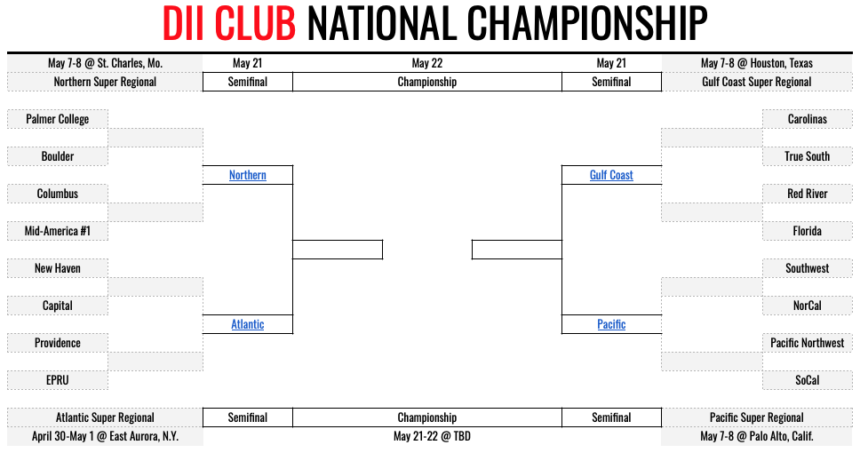 Some important games with playoff implications occurred last weekend, and those updates are summarized below. Every applicable update is also reflected in the DI and DII brackets – for both Super Regionals and national championships. And there’s loads more context in previous updates: DII and DI. With that said, view the brackets with an asterisks in mind, because USA Club Rugby is the authority here; there’s just no information being circulated publicly.

Note: The hyperlinks in the DII national bracket will send the viewer to the Super Regional brackets. Or just toggle through the tabs at the bottom of the doc.

LAST WEEKEND …
Heading into last weekend, Houston Athletic (HARC) and Colorado Gray Wolves were undefeated in the DI West. The Texans traveled to Colorado for a double-header, defeating Denver Black Ice 71-0 on Saturday, but then following to the Glendale-based team 51-19. The DI West will decide its champion and representative to nationals on May 7, when the 2nd place team travels to the 1st team for the final. DI CLUB BRACKETS.

The Mid-Atlantic already knows its title matchups for the DII North (EPRU) and DII South (Capital), both of which will be contested April 9. And just the way the schedule worked out, EPRU’s Harrisburg and Phoenixville will end up playing each other on back-to-back weekends. Last Saturday, White Horse beat previously undefeated Harrisburg 56-5. Fullback Corinne Gallagher led all point-scorers with 26 on four tries and three conversions. The rematch is this Saturday and the stakes are the Atlantic Super Regional. The winner of Severn River vs. James River will also advance to the April 30-May 1 tournament in East Aurora, N.Y.

In the DII Southwest, Albuquerque beat Las Vegas 47-32 at home. The Atomic Sisters moved the ball around, scoring through front rows Gabby Rivera and Victoria Salazar and outside backs. Inside center Amber Glasrud accounted for 15 points on a try and five conversions. Now, the New Mexico team will travel to Mesa, Ariz., on April 23 to contest the Southwest championship against Old Pueblo Lightning, and the victor will advance to Pacific Super Regionals.

THIS WEEKEND …
* As mentioned, Florida, Capital and EPRU will name their champions this Saturday, April 9, and winners advance to the Super Regional stage.

* True South is holding its DII championship this weekend in Knoxville, Tenn. Semifinals are: #1 Minx vs. #4 Nashville, and #2 Chattanooga vs. #3 Lagniappe. Title is Sunday, and victor heads to Gulf Coast Super Regionals.

* In the DI East, this Saturday’s NOVA vs. Raleigh match pits the two 5-0 teams against each other. Both are guaranteed semifinal berths to the Atlantic Super Regional, and the game will be a great test and gauge heading into the post-season. Atlanta has also guaranteed its semifinal berth, and the fourth spot is still in contention by the remainder of the field.

* Big game between Fear the Maniacs and Southern Pines, which are tied for second in the DII Carolinas-Georgia standings this Saturday. They both have 24 points and won their league games last week by big margins. Fear beat Eno River 55-14, and SoPi beat Savannah 53-7. The 2nd-ranked team will face undefeated Augusta (which beat Columbia 68-0 Saturday) in the April 23 championship, and that victor will advance to Gulf Coast Super Regionals.

* And obviously, the Women’s Premier League returns this weekend after two-and-a-half years gone, but that competition will get its own coverage and preview. Stay tuned!