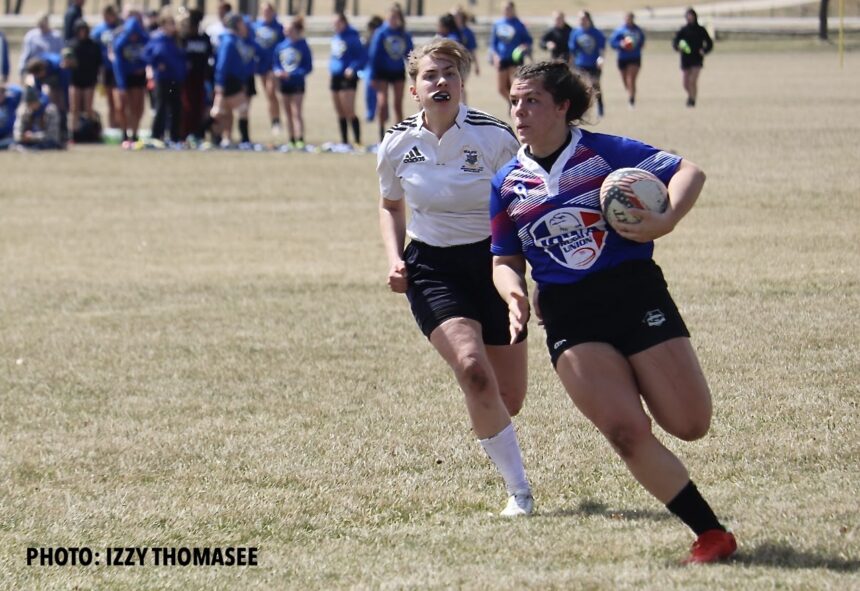 The Illinois, Iowa, Minnesota and Wisconsin U23 all-star teams met in Iowa Falls, Iowa, for a weekend of select side 15s. Iowa took top honors, playing Wisconsin in the final, while Minnesota took 3rd. The Midwest U23 Thunderbird coaches had plenty of talent to gauge, and will follow up with eastern U23 tournament on April 23-24 in Cincinnati.

I’ll say the weekend went off essentially without a hitch. All four programs had head coaches who were alumni of the programs they were coaching – which was pretty darn cool. Our referees were mostly alumni, even the head athletic trainer, Traci Tauferner played women’s rugby. There was an incredible spirit of giving back, and I know the players felt it. We took a lot of time to encourage everyone to play on after college, and to stay involved. I’m truly proud of what we have going with this tournament.

Saturday morning began with Wisconsin and Illinois. Wisconsin’s hard lines and speed outside put Illinois on the back foot from the start. Illinois never stopped fighting, even while clearly outpaced. Wisconsin outside center Claire Engmann (Northern Michigan Univ.) scored two tries and kicked eight conversions (26), and was nearly matched in points scored by NMU teammate and inside center Bianca Rosales, who scored five tries (25). Wisconsin had 10 individuals dot down tries in the 110-0 win.

The second match featured the home team, Iowa, and reigning (2019) champions Minnesota. Both teams showed lots of physicality right out of the gate and it took a while before the first set of points went up on the board. But then Madie Dunn (Iowa State) broke free for a 50-meter run and dotted it down for Iowa. Minnesota came out hard in the second half but couldn’t keep up with Iowa’s speed around the outside. Erica Coulibaly (Univ. Iowa) and Payton Schutte (Univ. Northern Iowa) came out with three tries apiece and Maggie Burns (Univ. Northern Iowa) earned herself two tries with her hard running lines at inside center. Dunn converted 6 of 13 to help Iowa finish with a final score of 77-19 over Minnesota. Iowa had a total of eight different players who scored throughout the game. 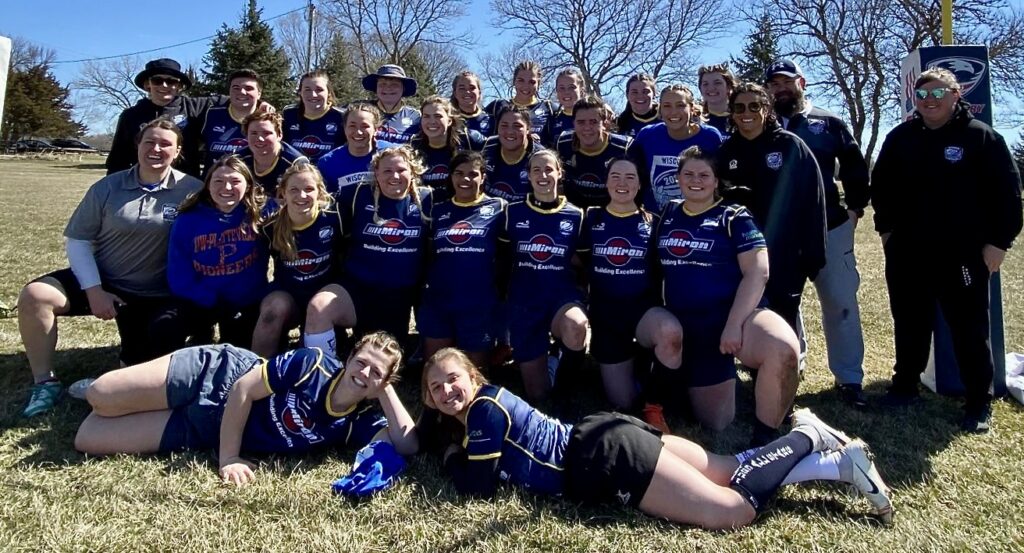 After the games concluded, the teams gathered for an all-tournament spaghetti dinner. Midwest U23 Thunderbird coaches Meghan Flanigan and Xane Gerasimo hosted a player Q&A after dinner featuring an amazing lineup of former select side players. WPL Acting Commissioner Ali Gillberg talked about the Women’s Premier League and the structure of club rugby in the U.S. Two-time Rugby World Cup vet Lynelle Kugler talked about her pathway from regional select side to the USA Women’s National Team, as well as a WPL National Championship with the Twin Cities Amazons. Amazons head coach Rebecca Radtke talked about her journey from Minnesota U23 Select Side to Midwest Thunderbirds, to a long playing career and eventual coaching career leading her to coach in the WPL. Lastly, Chicago Lions player and Illinois College All-Star coach Betty Nguyen spoke about how the Thunderbirds gave her the confidence to play in the WPL, qualifier 7s and now with the DI Chicago Lions. The messaging to players was simple – keep playing after college. You are good enough to play at the highest levels. 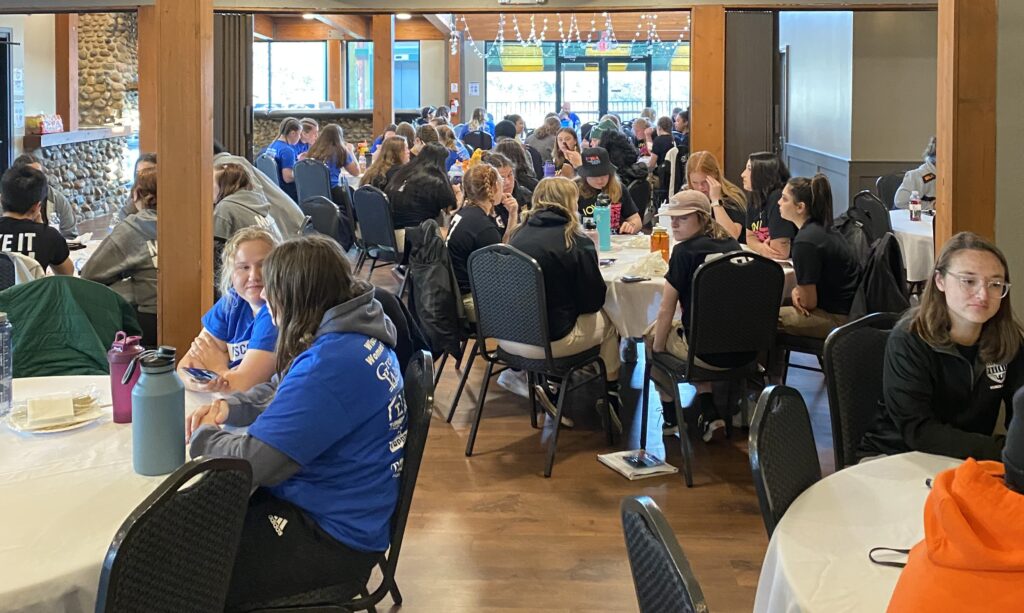 Sunday’s 3rd place match featured strong wind gusts, and great energy from both Minnesota and Illinois. Minnesota had a lot of pace in their forwards, and a backline featuring senior club players – that experience paid dividends as they went on to win 79-0. Illinois again fought hard from whistle to whistle, playing with heart – and undoubtedly gaining experience that will help their program moving forward. 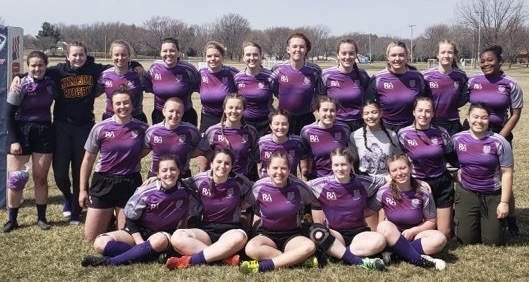 The final featured two incredibly strong sides. Iowa scored inside the first three minutes, and Wisconsin answered back with a try of their own. Eight minutes into the match, Wisconsin was up 7-5 and it looked like a track meet was shaping up. Thanks to incredible defensive fullbacks from both teams, the two sides battled back and forth with no score for the next 20 minutes.

Iowa finished the half with two tries to take a 15-7 lead, but with 14 players thanks to a high tackle yellow card. Iowa came out strong in the second half, as Wisconsin started losing starters to injuries, and was up 25-7 when Wisconsin earned a yellow card of its own. Wisconsin’s bench brought energy and solid play, but in the end they fell short to Iowa’s pace and superior strike lines. Iowa beat Wisconsin 37-14.

The weekend also featured excellent officiating from Wisconsin U-23 veterans Taylor Rozman and Hailey Bussan. Their crew was rounded out by Mike Good on Saturday, and Chicago Lions’ Nickey Edgcomb came down Sunday to officiate the final. Preparations are already underway for next year’s tournament, with Wisconsin offering to host April 15-16.

Midwest coaches named 20 players to the All-Tournament team, which came with automatic invites to the Midwest Top 100 Camp in Milwaukee, Wisc., on May 14. Congratulations to these incredibly deserving athletes!