NOVA is the DI National Champion 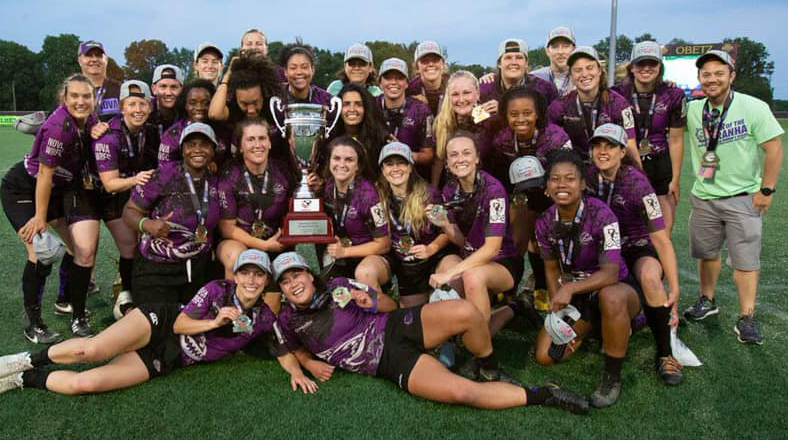 NOVA applied the pressure early on and kept the opening few minutes of play in Austin’s end, forcing Valkyries flyhalf Jordan Heller to kick down field. The second clearance was fielded cleanly and moved quickly to lock Katie Lutton, who froze the defense while considering the pass and then broke through. Just before the cover tackle, Lutton hit wing Stephanie Barros in support for the final sprint and try. Scrumhalf Bri Kim added the extras for the 7-0 lead.

Austin responded well and kicked off a substantial block – approximately 20 minutes – of play mostly in NOVA’s end. The Valkyries built some continuity and was able to hold onto possession through long sets of phases, even as NOVA’s defense rushed off the line and often swarmed the tackle. Players like Caitlin Reedy, Heller and Chelsey Aramabula took advantage of some mismatches for bigger gains, and two high-tackle penalties allowed Austin to pierce deeper.

NOVA also missed opportunities to relieve pressure, as a penalty kick didn’t find touch and a not-straight lineout – which generally struggled on the day – produced turnovers. After 10 minutes, Arambula broke down the sideline and another penalty set up try-line punches from No. 8 Geraldine Thomas and then prop Alexis Frueh. Flanker Kirby Delgado finished the drive with the dive-over, 7-5 to NOVA.

A diving-over penalty and then Reedy-Frueh breakaway put Austin back in scoring position, and there was a potential opportunity for a shot at goal. Instead the Valkyries decided to run it and an unfortunate slip off the tap stifled that go-forward. NOVA flanker Stephanie Iacobucci did well to rip away possession and a kick downfield relieved the immediate threat.

An exciting passage of play saw Heller weave through the defense and line up Karla Navarrete for the finishing pass, but a diligent chase from Emily Blease put the flyhalf into the passing lane for the intercept. The clearance didn’t go to touch and then CJ Hildreth was yellow carded. Two minutes later, Delgado was back in the try zone, dotting down Austin’s second try. Heller added the conversion for the 12-7 lead.

As the half wore down, NOVA began to play with more possession, and championship MVP and scrumhalf Bri Kim did a great job of keeping the game moving as the team found some continuity. At 36 minutes, Kim missed a shot at goal from outside the 22, but play stayed in Austin’s end.

As the clock expired, Austin gave up a penalty approximately seven meters out and Kim opted for the kick to touch and lineout. Ball moved to Hildreth into contact and the center got the offload to Blease coming around. The final pass made it to Barros for the try, 12-12 into the break.

NOVA kicked off the second half with a smothering defensive push, driving Austin backward into its own end. Heller smartly punted the ball downfield and Sierra Jenkins did an excellent job in the chase to contain Nicole Benedetti and relocate play in NOVA’s 22. Eventually a not-releasing penalty during an attempted poach in front of the posts saw Heller add three points. The game’s second lead change put Austin in front 15-12.

NOVA went back to work and steadily built the phases into Austin’s end. The Virginia side was a bit better in securing its own ball, and impact subs like Nwakaego Onyekwere did a fabulous job of challenging the Valkyries’ tackle completion rate. Julia Fortkort, who came on for the injured Meekyoung Lee, had a similar impact on the Valkyries.

Navarrete was yellow-carded for a diving-over penalty inside Austin’s 10 meter, and the subsequent kick to touch set up a driving lineout that Kayla Cook dotted down. The No. 8 launched into the air in celebration, as NOVA took a 17-15 lead with 25 minutes to play.

A deep restart forced Benedetti to send a clearance to midfield and an ill-advised pass in the back three resulted in a knock-on and turnover. The NOVA scrum became an energy source in the second half, and relentless defense – whether it was Ariel Johnson or Liz Wilson flying up off the line or multiple players swarming contact to slow down the offense – kept the pressure on. The Valkyries were able to break through with players like Arambula and fullback Claire Tilton but NOVA had the personnel in players like Christina Metzmaier to prevent breakaway scores.

Cook went on a long, rangy run to put NOVA in scoring position and then many phases later, Benedetti scored from in close, 24-15, at minute 67.

Austin needed two scores and that urgency never left the pitch. The Valkyries fought for that lead change to the final seconds and was rewarded with a Thomas try. As Heller’s conversion sailed through the uprights, the flags went up, and then the final whistle sounded: 24-22 to NOVA.


NOVA is the DI National Champion