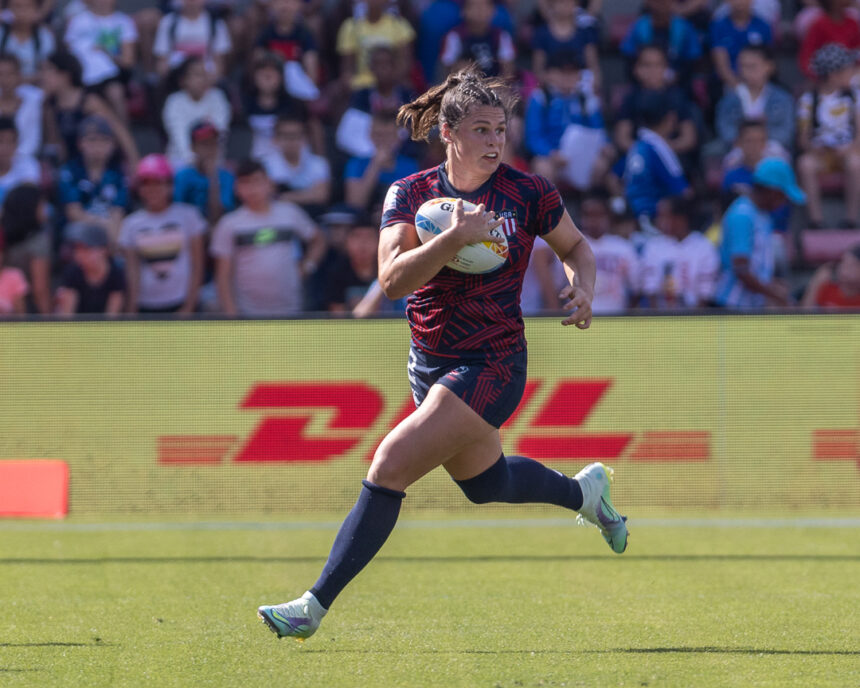 [Alex Ho photo] The 2022 Rugby World Cup Sevens will be held Sept. 9-11 in Cape Town, South Africa, and the women’s competition involves 16 teams – a field that was finalized last weekend in Bucharest, Romania. With 50 days to go until kickoff, the tournament has released the opening-round matches for the single-elimination competition. Read the full release.

Akin to the 2018 RWC 7s, the competition format differs from the HSBC World Rugby Sevens Series. There are no pools or pool stages, but single-elimination with a consolation bracket. So teams are seeded into the Round of 16, a loss is relegation to the Challenger bracket, and a win is a ticket to the Championship quarterfinals. The men have an additional play-in round to accommodate the 24 teams, but then mirror the women’s pathway from the Round of 16 onward.

The women’s competition begins at 6:11 a.m. EDT on Friday, Sept. 9. The USA Women’s 7s Team will open up the World Cup against Poland at 6:33 a.m. EDT. A Round of 16 win will send the Eagles to the Championship quarterfinals on Saturday, Sept. 10 at 4:05 p.m. EDT (which is 10:05 p.m. in South Africa), when the USA would play the winner of Canada vs. China. A Rd. 16 loss is a ticket to the Challenger bracket, which will play through its semifinals on Saturday before the Championship bracket returns to action. Toggle through the different brackets here.

The Championship semifinals and final, and the rest of the placing matches occur Sunday, Sept. 11, beginning at 4:18 a.m. EDT (for the women). Visit rwcsevens.com for detailed info.


EIRA Names U16, U18 Rosters for Munster Matches