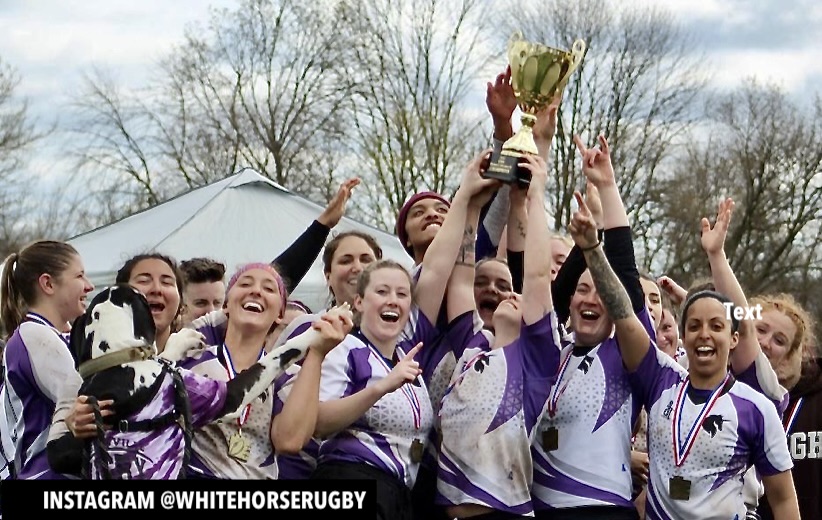 There were several USA Club Rugby Division II and III club championships last weekend, and the victors have booked spots in their respective Super Regional playoffs. For DII, regionals are the equivalent of the national rounds of 16/8, and they’ll feed the national semifinal / championship stage (May 20-22) in Houston. DIII halts at the regional round, and thus far, only the Northeast quadrant of the country is holding a Super Regional for its women’s teams.

In the Mid-Atlantic DII, Severn River beat James River 60-0 for the Capital title, while Phoenixville (lead photo) topped Harrisburg 39-21 for the EPRU trophy. The Mid-Atlantic funnels into the Atlantic Super Regional (April 30-May 1, East Aurora, N.Y.), and pits Severn River against Empire champion New Haven, and Phoenixville against New England champion Providence in the April 30 semifinals (aka, national round of 16). The Atlantic playoffs are the first of four Super Regionals to occur on the calendar.

Tampa Bay won its first-ever Florida state championship, defeating Fort Miami 59-0 in Saturday’s final. The Krewe now advance to the Gulf Coast Super Regionals, taking place May 7-8 in Houston, and will play the Red River champion in the opening round. On the other side of the Gulf Coast bracket, Knoxville took the number-one seed into the True South championship and followed through with a 68-3 final win over Chattanooga. The Minx will face the Carolinas-Georgia champion (which will be decided April 23 between #1 Augusta/Charleston vs. #2 Cape Fear) in the national round of 16.

On the DII horizon … an important match between KC Jazz and St. Louis occurs this Saturday. If the former wins, then it’ll take the Mid-America berth to Northern Super Regionals (May 7-8, St. Charles, Mo.). If St. Louis wins, then a tiebreaker game will follow. • On April 23, Albuquerque travels to Mesa, Ariz., to face Old Pueblo for the Southwest title. Winner advances to Pacific Super Regional.

The Pacific Super Regional is murky in terms of semifinal match-ups (and dates and locations). SoCal’s Santa Barbara and San Fernando Valley are the only DII teams playing league games, and the former won their match-up Saturday. However, it wasn’t billed as a championship. • Here are DI/DII NorCal results. No clarity on which teams are DI, DII or how post-season reps are named. SoCal did report that a “Cal Cup” game against the NorCal champ was scheduled for April 30 in San Luis Obispo. • The Pacific Northwest’s top-two teams, Emerald City and Portland, were supposed to play Saturday, but that game was canceled.