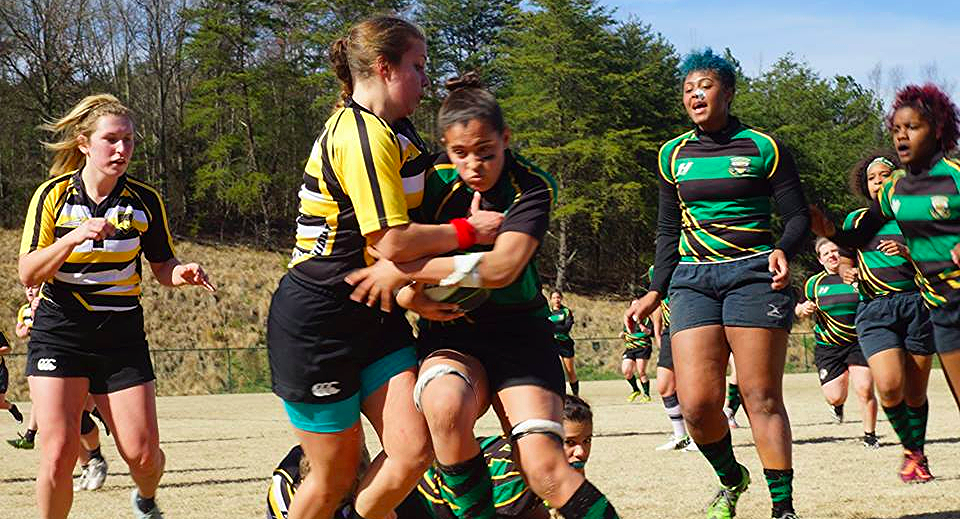 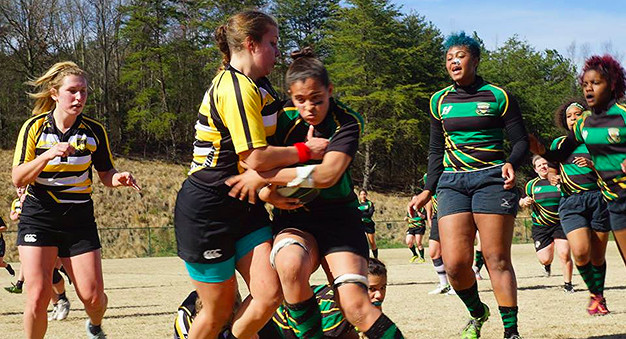 UNC Charlotte (green) scored on the last play of the game to win. /// Photo: Savannah Dougher

One-try wins pervaded the country last weekend, and the Carolinas conference took the drama one step farther. Title contenders Appalachian State and UNC Charlotte were looking for their first matrix win of the season Saturday, and waited until the final play of the game before deciding a victor.

“It was a great wake-up call for us,” UNC Charlotte coach Courtney Jessamy remembered. “After a quick pep talk as App State kicked their conversion, their heads were back in the game. They knew they’d have to commit to their tackles if they wanted to pull through with a win.”

A physical game ensued, as Appalachian State rode that early momentum through the first half and UNC Charlotte fought for control. UNCC had the edge in the scrums, with a nice pop and controlled drive through the entirety of the match. Appalachian State captain Meghan Campbell had drilled her pack in perfecting lineouts, and the Boone-based team found more success in that set piece.

Appalachian State outraced its opposite to the rucks, and Campbell and No. 8 Mikhala Dougher were particularly visible. Both led in the way of tackling and seeking out work, and the duo also had a good day with ball in hand.

“We were able to get the ball down the line with great movement to our wings, great insertion into the line from our fast-paced fullback, and our ruthless centers made great offensive contact hits,” Jessamy contrasted the backs. “Our scrumhalf, Faith Sallee, was great at reading the field at breakdowns and running the ball through the open space, which led to her scoring two tries.”

During the second half, Appalachian’s progress slowed.

“It was a little upsetting because during the first half, we were coming up strong, playing hard,” Appalachian State backs captain and scrumhalf Julie Blakesmith said. “In the second half we had some injuries and had to move some people around. We don’t have a huge recruitment pool and we were putting in some girls who had never been in a game before. It took some time for them to settle into their positions.”

Appalachian State inside backs Sadie Lagle and Katelyn Mickelson worked well together and kept the back attack alive, but as the game unfolded, team fitness deficiencies began to show themselves. Kicking became an important stratagem in repelling UNCC’s positive territory.

With two minutes remaining, the score was tied at 29-all. UNCC was on Appalachian State’s 22 meter, but a series of penalties pushed the team to its defensive 22. A turnover allowed one final push, and UNCC reworked the ball into scoring position.

“It was now or never,” Jessamy replayed the closing moments. “Senior Sheaon Mayes knew it was going to take all she had left to make it to the try line, and she stiff-armed her way through the back line for the one-try win. Although rugby is a very physical game, that last try was all about heart.”

A dramatic finish, but a lot of individual effort went into that 36-29 victory. Jessamy praised the work of Sallee and No. 8 Asiah Peterson.

“She’s always at every breakdown with great communication and field awareness,” the coach lauded the scrumhalf. “It takes a lot to take her down, and she gives everything she has in those 80 minutes on the field.

“Some people need a few minutes in a game to wake up and fight, but Asiah is always ready to go right out of the gate,” Jessamy described the emotional leader. “She has the strength of a pack player, and speed and agility of a back. Although she didn’t score a try, she gained us the meters we needed in order to score.”

“This team has undergone a lot of changes with coaches over the past two years,” Jessamy wrote. “This year they decided they really wanted to be competitive and strive for success this matrix season with me as their new head coach.”

A good start for both teams, and Appalachian State earns two bonus points for the loss and four-plus tries. A big match-up for both of these teams will be the University of South Carolina, which started league season with a 84-0 win over College of Charleston.