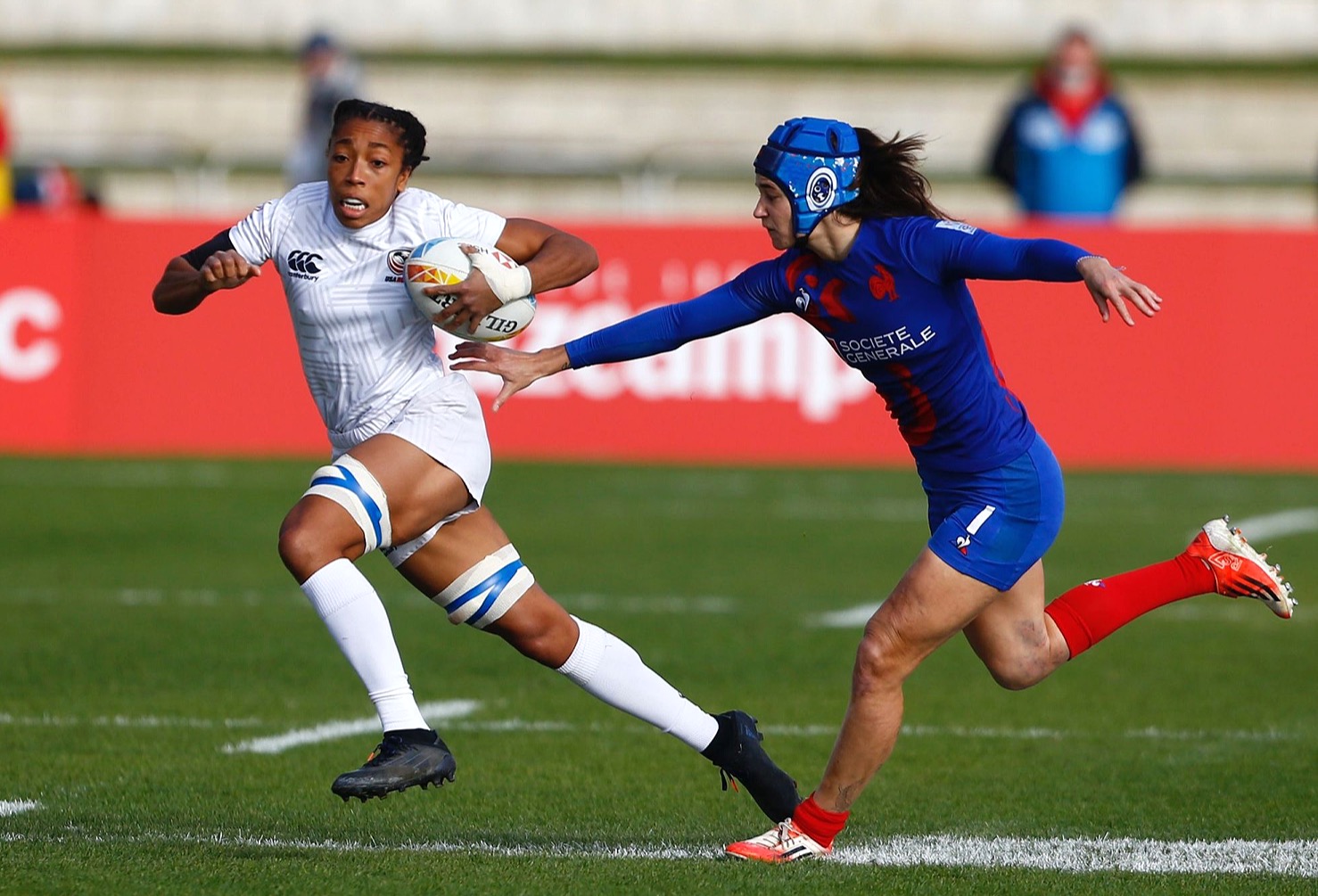 The USA is playing in its first HSBC World Rugby Sevens Series final since winning the Glendale, Colo., tournament in October 2019. Today, the Eagles defeated France 14-10 in the Malaga 7s Cup semifinals, and will play Russia at 12:26 p.m. in the gold medal match.

France was very physical and relentless in defense, and while there were big hits and decisive work in the breakdowns, the USA didn’t quake. The Eagles scored both of their tries in the first half, and Alena Olsen slotted both conversions – a reflection of the scrumhalf’s skill but also the breakaways and trailing defense that allowed more-centered tries.

Les Bleus flinched early on, as strong pressure from the opening kickoff forced a knock-on. The Eagles spent the next minute-and-a-half with ball in hand, and France met the USA on the gainline. As the ball moved away from contact, a massive open-field hit and turnover looked like it was in the making, but Ilona Maher was calm and efficient in quickly moving the ball to Kristen Thomas.

Thomas made ground on the wing and Maher continued the forward momentum while managing the sideline well. Back the other way, Lauren Doyle was able to send a skip pass out of a hard tackle. It didn’t go to Jaz Gray’s hands but the wing recovered well with Naya Tapper. On the recycle, Olsen spied some space out wide for Canett and a skip pass put the flyhalf away for the score under the posts. Olsen converted, 7-0.

France knocked on the restart but gained momentum in its defense. A massive hit in the ruck dislodged the ball and Les Bleus transitioned to a stepping, evasive attack through traffic. In scoring position, Carla Neisen saw a big gap between the ruck and first defender, and carved easily through it for the try: 7-5.

The USA let the restart hit the ground, and France stayed on attack. But then an errant pass from Neisen saw the ball fall between two teammates, and Doyle was there for the intercept. Maher was close in support and drew three defenders to her tackle, opening some space for Thomas and the try. Olsen converted for the 14-5 lead.

With little time on the first-half clock, France incurred a yellow card, and the USA had an opportunity for another attack, but an unforced knock-on at the tap ended the half.

The French looked in trouble when it started the second half with a not-10 kickoff, and the USA reset with a midfield scrum. France was still playing with six, and desperate defense produced another penalty and USA scrum. But then a slowly supported break off the set piece was the opportunity for which France was looking, and a turnover followed. The attack went quick, and Valentine Lothoz tore down the sideline. The chase went high in the tackle, and the referee played advantage, Jade Ulutule scooped up the ball, handed-off the defense and scored, 14-10.

There was plenty of time to play and France had its chances to overturn the lead. Les Bleus turned over possession after a Tapper break, earned a short-arm penalty in the subsequent scrum, but a brace of knock-ons halted momentum. France keep working for that turnover in contact, but that aggression crossed the offsides line, allowing a final kick to touch to end the game.