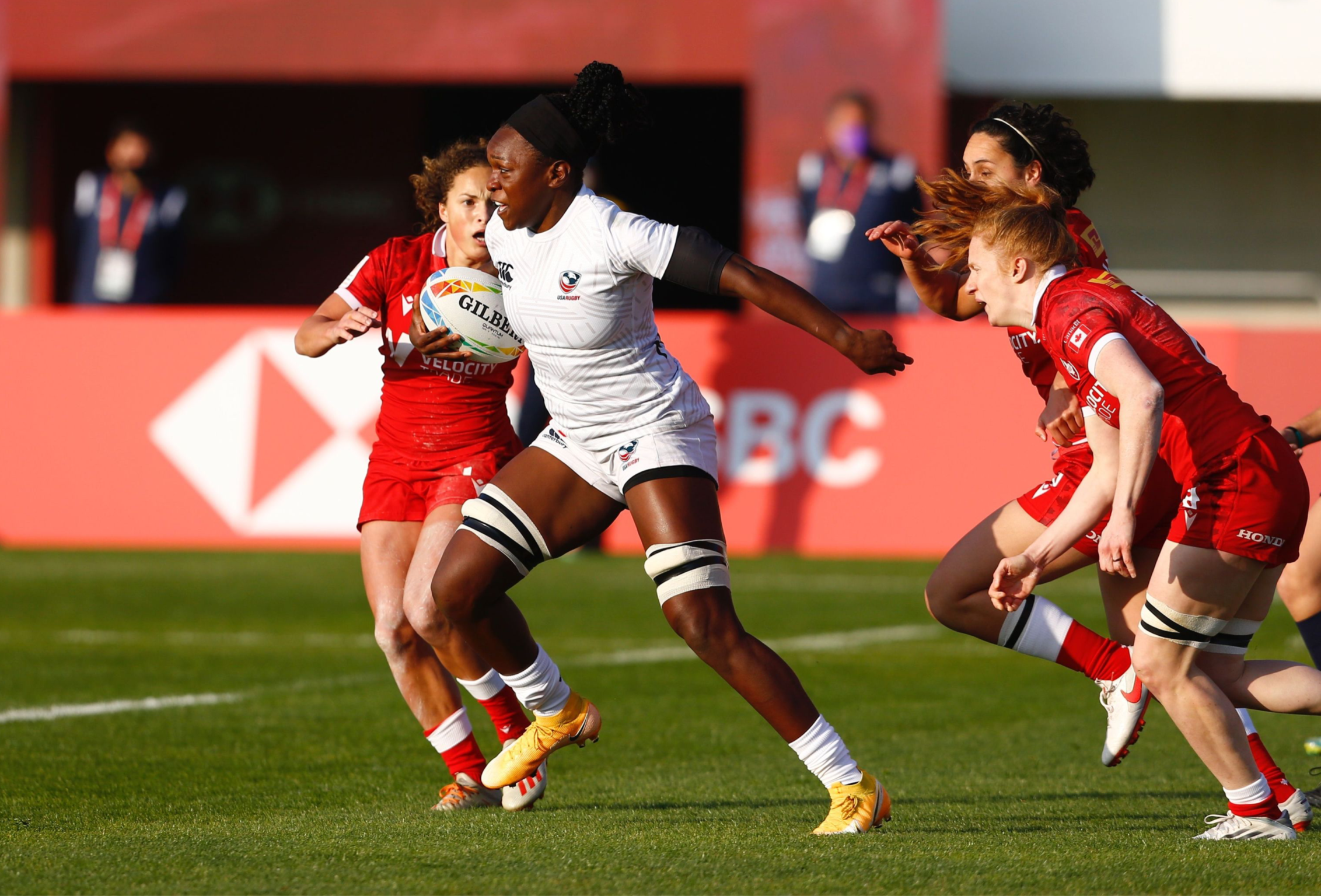 Emba was a handful, as always / Photo: Martin Seras Lima for World Rugby

Malaga is new to the HSBC World Rugby Sevens Series and marks the third leg of the women’s 2020-21 circuit. The USA (#5) opened with a 22-7 win against Canada (#10), and will follow with a 9:12 a.m. ET match aginst Poland to close out Pool B play. Fiji was unable to travel, affording the rest of Pool B with a forfeit win.

The Americans received the kickoff well and moved the ball to Kristi Kirshe, whose in-and-out was good for a break to Canada’s 22. The ball moved swiftly to the far touchline and Kayla Canett, and the quick recycle thinned the defense just enough for Ilona Maher to fend and angle her way to the try line. Nicole Heavirland added the extras for the 7-0 lead in the second minute.

Heavirland was instrumental in setting up the subsequent score. An infringement at the ruck saw the referee award advantage to Canada, who then charged up field for a distance that satisfied the official. Just as he lowered his arm, Heavirland was all precision in the tackle and poached possession. The ball moved away from congestion quickly, and a skip pass to Naya Tapper saw the wing stride down the sideline for the try and 12-0 lead.

Until the final play of the game, Canada was plagued by its own errors – a forward pass, knock-ons, missed switch – and was drawn into a lot of contact. Some messy play awarded the U.S. a scrum in its own 40, and Emba cleaned up some confusion, scrambling well and buying time until the attack reset. Everyone took turns running with the ball and making gains, and the fast-cycling offense forced multiple penalties in the breakdown. From seven meters out, the USA reset with an attacking scrum, Lauren Doyle dummied her opposite for a near-try. The recycle and Heavirland quick pass found Emba for the final try of the half, 17-0. 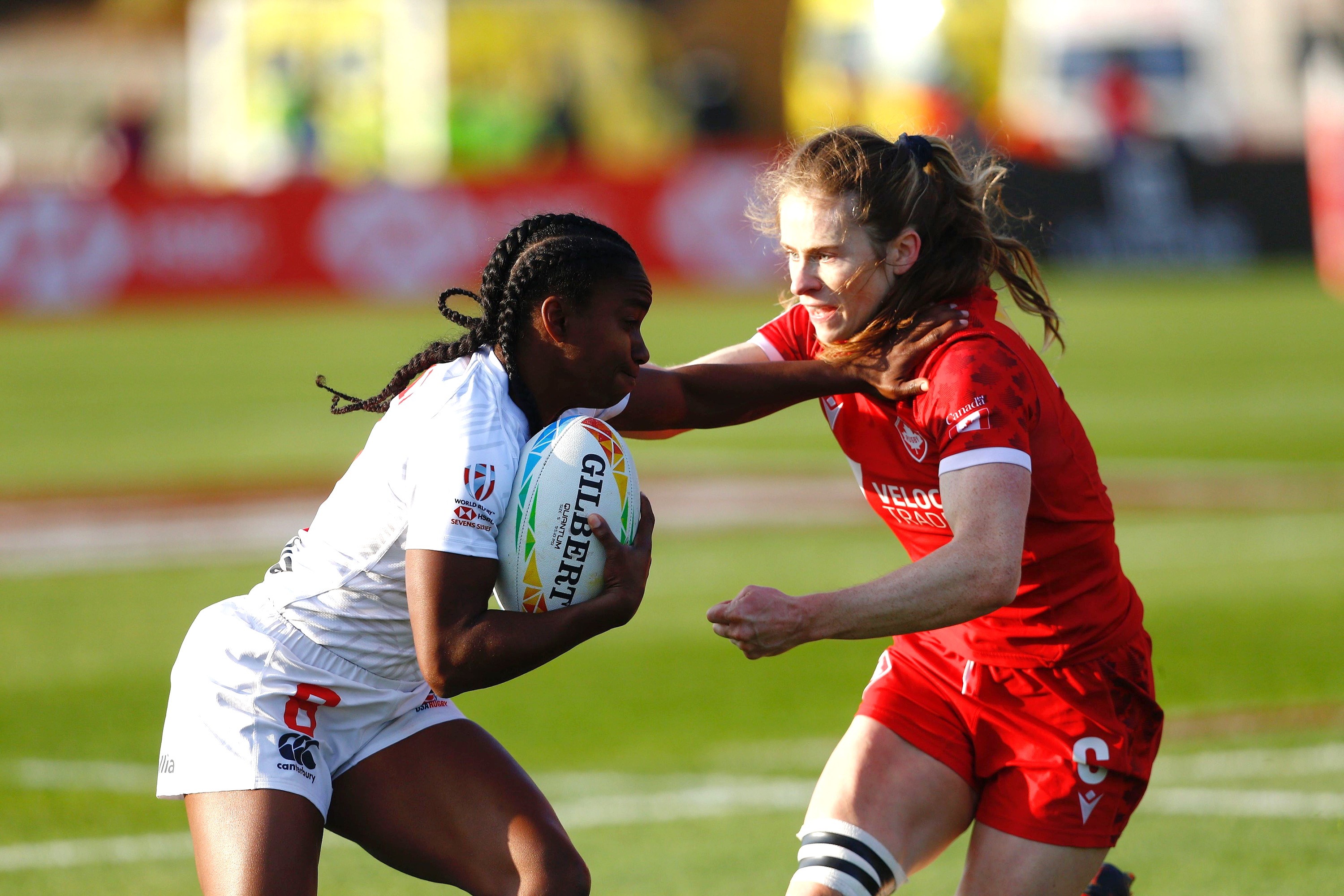 The Americans shut out the Canadians through regulation, but the second half broke down a bit. The USA kept its own restart but retreated significantly before handing possession over with a missed offload. Canada built to the 22, and showed some spark when grubbing through an otherwise stiff defense. Emba was there for the dot-down, but the subsequent drop-22 didn’t cross the line for the turnover. Canada didn’t do any better, breaking through the middle and immediately knocking on.

Sarah Levy then took the pitch for her HSBC series debut and surely would have scored a long-range try if it wasn’t for a just-forward pass. Jazamine Gray, however, was good for the track meet. After gathering a dribbling pass inside the USA 10 meter, the wing burned her opposite and outraced the chase 95 meters for the score, 22-0.

Alena Olsen’s restart didn’t go 10 meters and Canada used that momentum to build into the 22. The game got really scrappy, but with the full-time buzzer gone, Canada had one more opportunity through a close-range scrum. The ball moved to HSBC debut Alex Tessier and the center cut back across Kirshe for the centered try. Olivia Apps converted for the 22-7 final.

The USA’s next match against Poland (Friday @ 9:12 a.m.) will be its final pool play game.