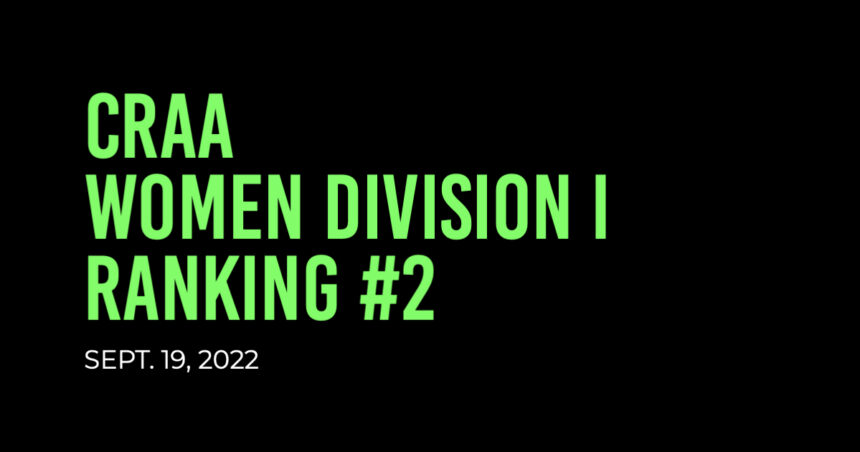 Week two of the College Rugby Association of America (CRAA) women’s Division I season brought some movement in the rankings. There are still a couple of teams that have not yet played an official league match, but that will change this weekend.

First, there was one replacement. Wyoming fell off the ranking after a 54-0 loss to Utah State, and Colorado State joined the top eight with a 67-17 win against Montana State. The Rams slid in at number six, one spot above Colorado, which dropped a 31-7 contest to a pretty young Air Force team. Colorado State beat Wyoming by a larger margin than Colorado beat Wyoming, and that dictated the rankings order between the two teams.

Second, there was some debate on whether to swap Utah State, which has two league wins to its credit, with idle Northeastern. But we need a little more context before being dissuaded from the notion that the Maddogs are the closest team to Navy. Yes, that belief is based on last year’s results, but playing Navy well goes a long way. But all eyes are on Utah State, which plays Colorado State this weekend. Northeastern hosts Rhode Island in its season-opener.

UCONN and Boston College opened up the Northeast season against each other, and the Huskies ran in an 83-0 rout. Keisha Durden led all point-scorers with three tries, while Margaret Devlin followed with 12 on two tries and a conversion. Isabella Raviv slotted three conversions and added a try for 11 points, while Shayla Barker and Olga Wilson dotted down twice each. Rebekah Eckman, Lauren Penza, Tempest Rosario, Anna Shellman and Noemy Sigua scored one try apiece as well.

And third, Navy is still ranked No. 1, even after a loss. The Midshipmen traveled to Denville, N.J., to face American International College of Springfield, Mass. AIC is a Division 2 NCAA varsity program and the reigning NIRA national champion. The Yellow Jackets held Navy out of the try zone until the waning minutes, when Ana Olszewski crossed the whitewash in the 12-5 decision. It’s a loss, but a close against one of the top teams in the country, and we think Navy will be better for it. Navy will face NCAA D2 West Chester University this weekend.

Plenty of games this weekend, so check back in a week for the updated rankings.