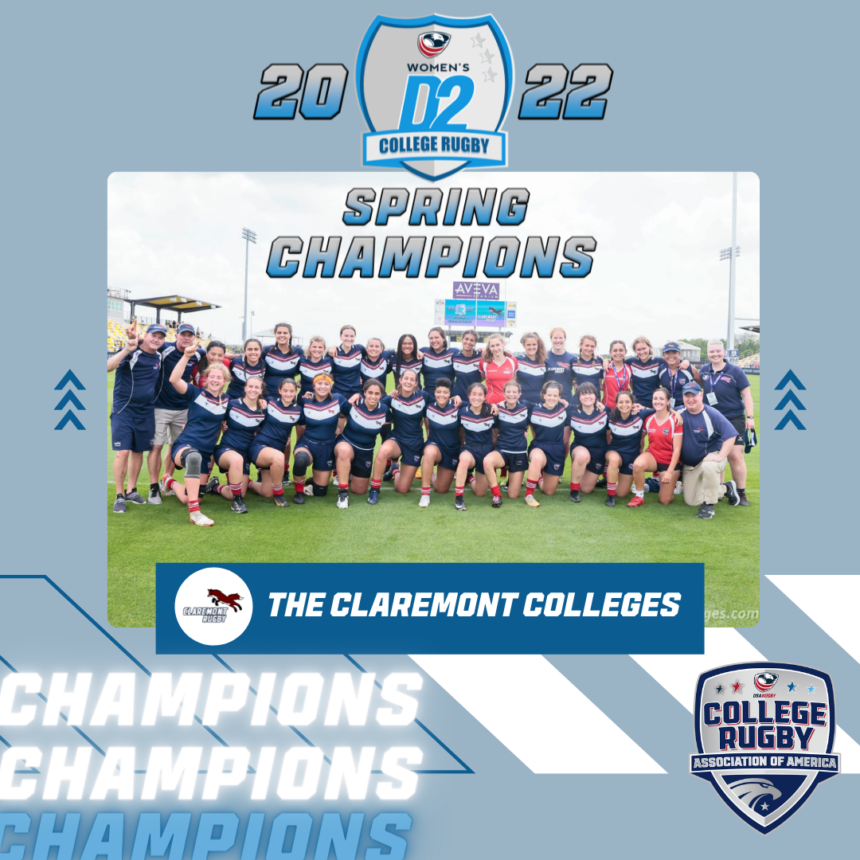 The College Rugby Association of America (CRAA) has closed its 2021-22 15s season, naming two women’s 15s spring champions and a national champion inside the Aveva Stadium in Houston, Texas. Stay tuned for player and coach interviews.

The day began with the Women’s DII College Spring 15s Championship between San Diego State University and Claremont Colleges (read more on their semifinal wins Friday). The Foxes were haunted by their regular-season loss to the Aztecs, but they got retribution Saturday with a 22-7 win – Claremont’s first spring title.

It took 39 minutes for the scoreboard to open up. Claremont had missed a penalty attempt in the third minute, and then San Diego State rallied defensively when a yellow card at the 20-minute mark could have spelled disaster. That said, some strengths started to emerge. The Aztecs had the better scrum, and Foxes flanker Caroline Bullock, a volleyball and basketball crossover, was excellent in the lineout, and the jumper was able to disrupt and steal throw-ins. The Claremont forwards, too, were good in their north-south carries and players like Savanna Beans, Maya Nichols and Anandi Williams were influential all day.

In the backs, Claremont inside center and MVP Robyn Collins really stood out. She had a good read on the defense and broke the line all day, but also did an excellent job of timing passes to support and furthering those gains. One such break set up the team’s first try, and the forwards’ fast support secured good attacking positions. Fullback Adeena Liang took advantage of slowly resetting defense to get close to the try line, and then the recycle moved to lock Eden Mahdavi, who had looped to the outside for the space and try, 5-0 into the break.

A minute into the second half, Williams tore down field to reset play in SDSU’s end, and the recycle saw Collins, Bullock and wing Vida Hasson team up on the sideline. Hasson nearly crossed the try line, but Bullock was there for the handoff and try: 10-0.

The Aztecs closed the gap, building off multiple tackler-assist penalties to gain some momentum. The team sent phases to the line and then Olivia Soares fed the incomparable Natalie Soares from 10 meters out. The lock literally ran over the defense and centered the try, which the rugby rookie converted, 10-7.

As the game waged onward, SDSU started to get a bit stagnant on defense, allowing Claremont to cross the gain line without pressure and control contact better. At the 53-minute mark, Collins side-stepped the defense to score beneath the posts, and Hasson converted for the 17-7 lead. Collins set up the game’s third try, taking a nice line through the defense then pinning the sweeper before offloading to #13 Madi Masser-Frye running on. SDSU wing Kristen Fletcher chased down Frye at the try line but the center wasn’t held and dove over the line: 22-7.

San Diego State had some chances late in the game, but just some small handling errors kept play pretty choppy. When the Aztecs gained a yellow card advantage at the 75-minute mark, the game was already decided: 22-7 the final. Claremont, after years of contending for the DII spring title, finally had its trophy, and earned it after accepting an at-large bid to the tournament on April 22. 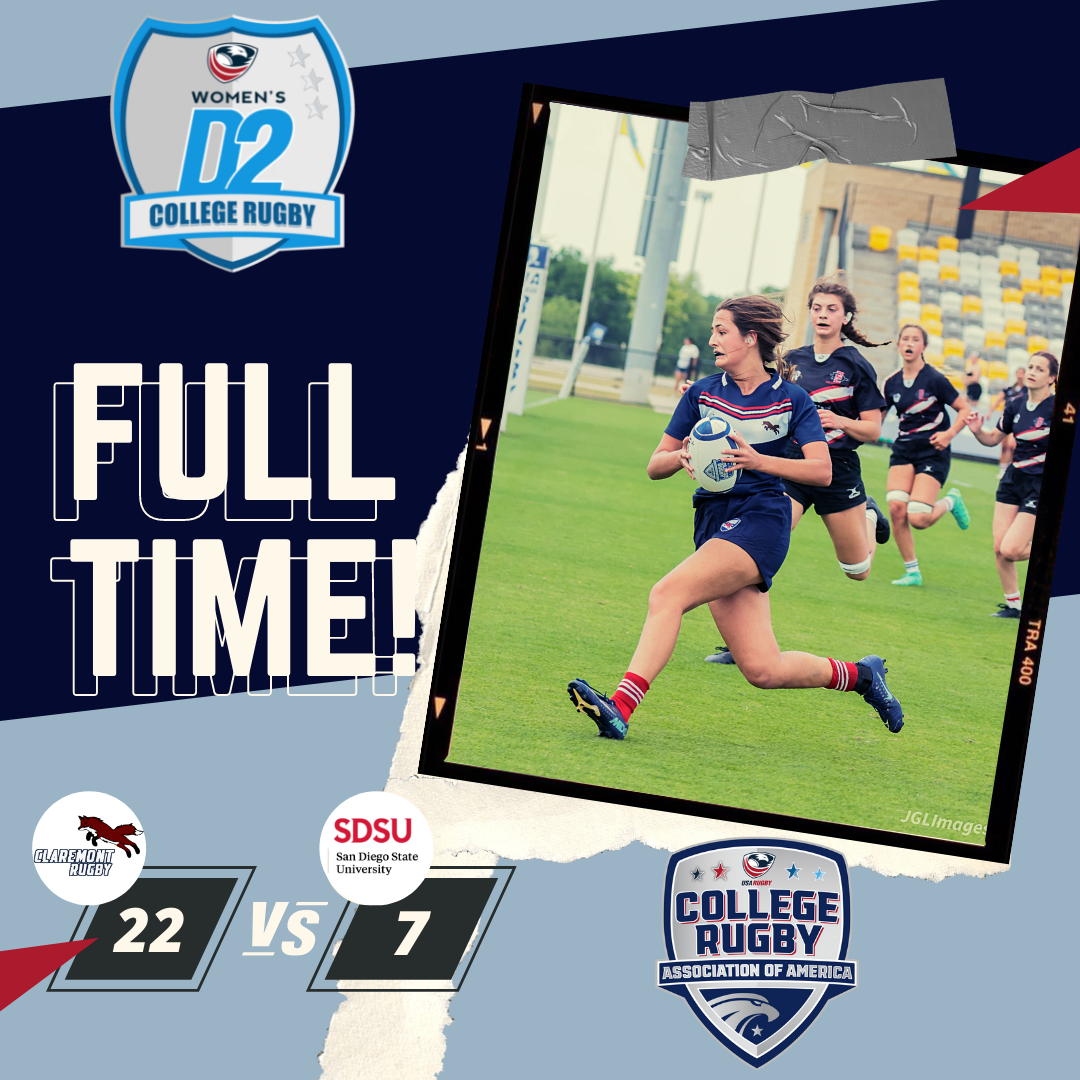 Two minutes in, a little shuffle pass in traffic from flyhalf and captain Matalasi Morrissette to MA Sorensen nominee Lewanda Aspinall saw the No. 8 score beneath the posts. Fullback Nicole Dimond slotted the first of 10 conversions. Virginia Tech did an excellent job of disrupting BYU’s lineouts, but as The Rugby Network commentator and USA Eagle Sarah Chobot noted, that disruption wasn’t followed by the execution of a turnover.

The Hokies were able to pressure the Cougars into repeat penalties and get to within meters of the try line, but BYU kept its shutout intact until late in the match when wing Kate Santos ran back an intercept for a try. Kate Hendren converted for the seven points, but otherwise, it was all BYU.

The Cougars built a 56-0 halftime lead. Wing Talosia Morrissette momentum-rolled into the try zone next, and then vice captain and outside center Delaney Rakuita took an errant clearance kick that the wind caught in for five. Wing Autumn Francis also returned a kick that didn’t make touch due to the wind in for a try, and then fullback Dimond scored one herself. Prop Kambria Hartrick, whom The Rugby Network named as championship MVP, scored inarguably the most emphatic try of the day, fending multiple defenders en route the try zone. The prop scored again, and so did Rakuita, before the half.

The half ended with a BYU yellow card but a good Matalasi Morrissette kicking game kept the pressure off, and the defense was stout in the second half. Reserves Makayla Komer and Heather Thomas scored, and hooker Kate Rugg ended the day with another front row try, and with Dimond’s 10 conversions, BYU capped an 80-7 win and title. BYU selected Annaliese Curtis as championship MVP. 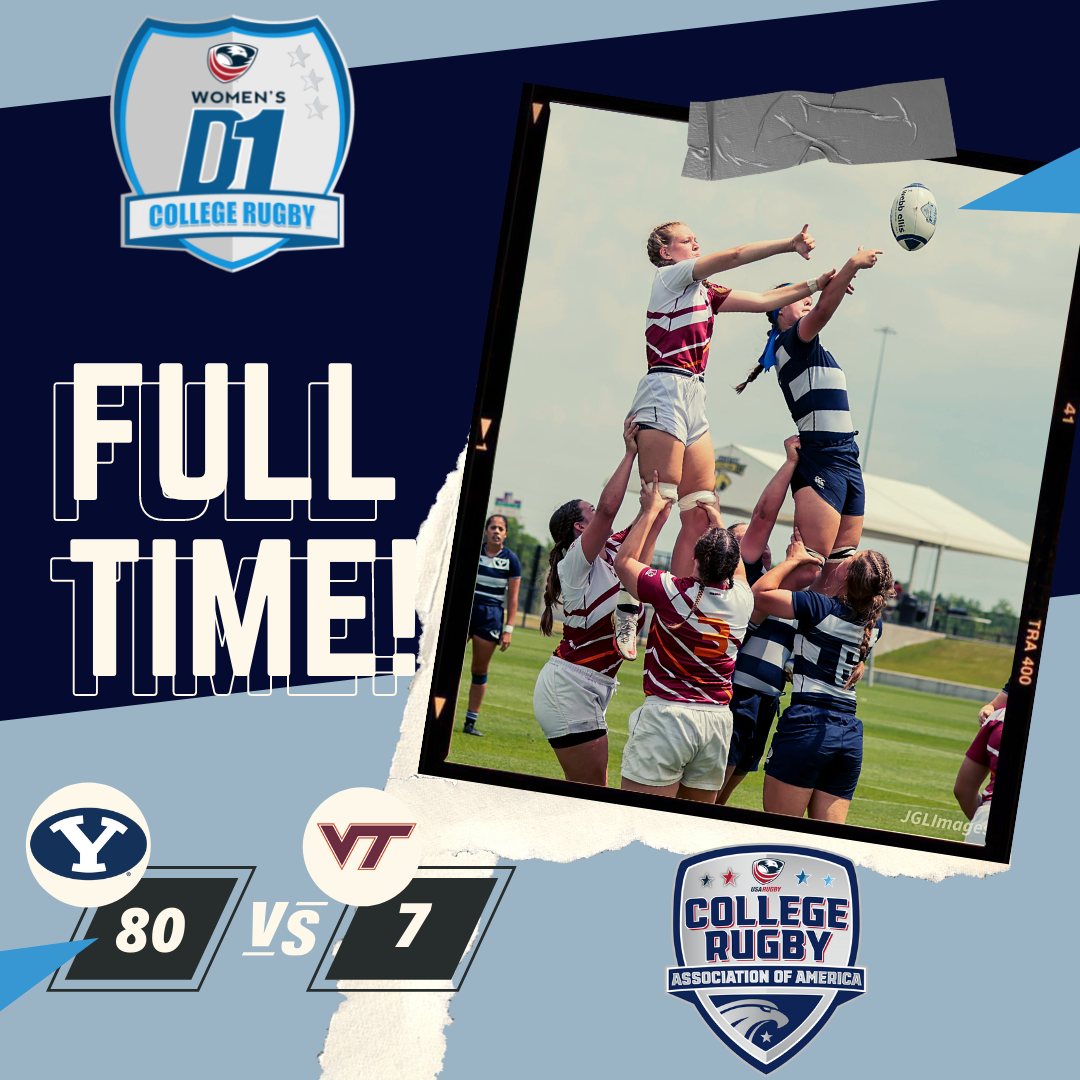 The DI Elite 15s National Championship capped the women’s finals on the day, and it was the physical, intense battle that one expects from Lindenwood University and Life University. In the span of a few minutes, two of three tries were scored, and then a third occurred in the final minute of play. And then Lindenwood won its fourth-straight national 15s title, 21-0.

Life challenged Lindenwood’s try line early on, as some dropped passes allowed the defense to swarm and counter-attack quickly. But the team suffered a jarring loss when flyhalf Adrianna Mendoza Silva left the game after 10 minutes with an injury. That absence might have impacted the team’s kicking game – Life had the significant wind in the first half – and those duties fell on freshman Nina Mason, whose punting duties increased in the second half.

Overall the first 15 minutes were pretty stop-and-go and there were a lot of scrums. But 15 minutes in, Lindenwood got some big runs from Eti Haungatau and Freda Tafuna, and when the ball moved the other way, a simple slip off the line opened a lane for fullback Helen Van Hattem. The freshman raced into open space and sat down the defender coming across. Tafuna converted the centered try, 7-0.

Minutes later, another Tafuna break got the defense scrambling backward, and then a dummy-and-go from prop Selena Tuilaepa afforded the second Lindenwood try. Tafuna added the conversion for the 14-0 lead that held through the half, and then the 79th minute. 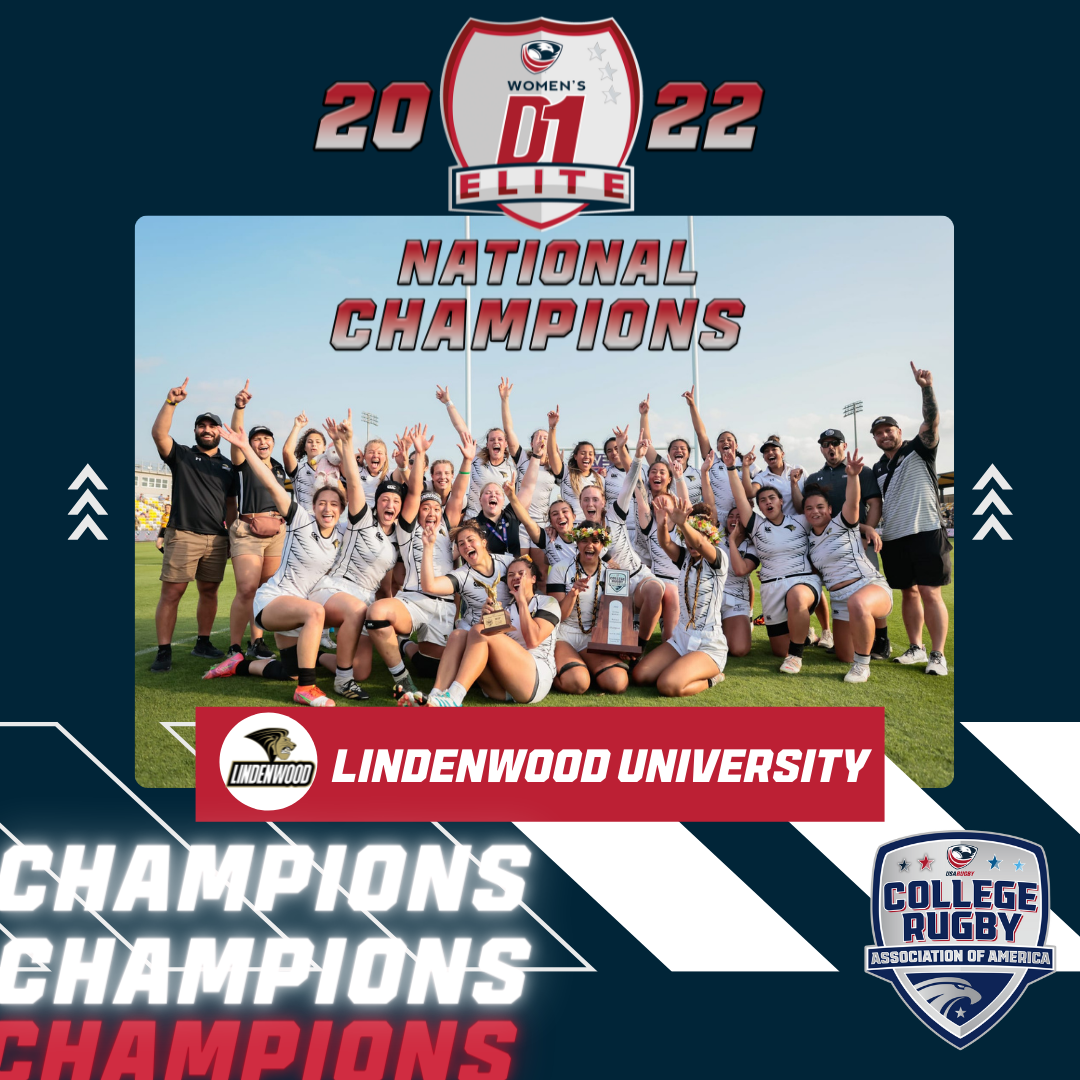 Although there were no points scored, the game was incredibly tough, and with the hot conditions, the game stopped on multiple occasions for injuries and muscle cramps. At one point, Haungatau and Saher Hamdan, who squared off all day, were leaning on each other with trainers stretching their calves. It was the end of the day for Haungatau, last year’s championship MVP, but the center put in a huge shift.

Lindenwood’s defense came up off the line consistently and with vigor, and that pressure compounded Life’s handling mistakes. There were still lots of highlight-reel moments – from Adrionna Duncan chasing down a massive breakaway and preventing a try, to Sativa Tarau-Peehikuru nearly dotting down a kick-ahead. The Lions center and team captain was named championship MVP and is always an inspiration. In the final minute of play, Lindenwood turned over a Life scrum and flanker Tafuna barreled over the line for the try and conversion: 21-0.

It was a great, tough game, and Lindenwood is still the champ. Stay tuned for player interviews.