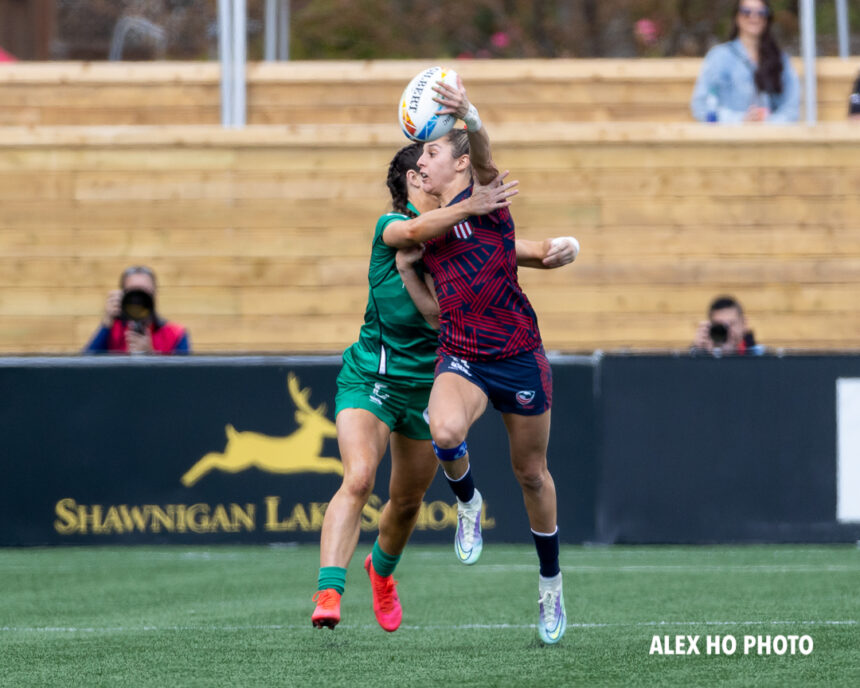 The USA lost its Canada 7s Cup Quarterfinal 17-14 to Ireland and heads to the Plate semifinals against  Spain at 1:28 p.m. PT.

A pair of handling errors halted early, but then Ireland regrouped with a scrum in the USA’s end and built a nice offloading series along the sideline. Eve Higgins looked sure to score, but Ilona Maher tucked that chin and chased down the Ireland ballcarrier right at the try line, then popped to her feet for the jackal. It was an incredible effort that warranted the prop’s fist-pumping reaction.

After a kick to touch and lineout around the 22, the USA worked some phases left and right attempting to run out of its end. The opportunity came when Kayla Canett challenged the two outside defender, double pumping a couple of times until the Irish collapsed. Canett then sent a one-handed pass to Jaz Gray on the sideline and the wing finished out the try, which was converted by Nicole Heavirland, 7-0.

Right away, Ireland was back in it, as a missed tackle in the middle of the field opened up a gap for Lucy Mulhall, who took an offload and peeled into open space for the uncontested try. Mulhall added the extras for the 7-7 scoreline and about a minute to play.

The restart was a little messy but the USA did really well to get out of its end, starting with a Maher fend and back-and-forth with Gray on the sideline. Heavirland hit a gap for a good carry, but the Eagles eventually gave up a penalty inside Ireland’s 22. As the American defense pushed Ireland backward looking for the turnover, Mulhall smartly kicked to touch to end the half, 7-7.
Ireland restart Knocks

Ireland’s kickoff bounced across the 40 meter and Kris Thomas did well to gather and keep possession for the Eagles. Maher, just like Canett, did a great job of engaging the two outside defenders, and then sent an over-the-top pass to Thomas on the sideline. Two Irish penalties followed, and the USA opted for a kick to Ireland’s 22 and lineout. Ireland drew a not releasing penalty and tried to run out of its end, but great physicality from Cheta Emba forced a not-releasing penalty in the breakdown. A phase or two later, Kristi Kirshe noted the slowly shifting defense and scored through a big gap beneath the posts. Heavirland’s conversion made it 14-7 with three minutes to play.

Heavirland’s restart didn’t go 10 and Ireland used the opportunity to work fast phases in the Eagles’ end. A missed tackle helped open up some space along the sideline, and Amee-Leigh Murphy Crowe was able to offload out of Maher’s tackle to hit Katie Heffernan back inside. It was a fast try, but in the corner, and the USA held a 14-12 lead with a minute to play.

Ireland sent a deeper kick to restart play and then piled on the defensive pressure. Ireland stole the ball in the ruck and then Heavirland stole it right back. The USA was running out of its 10 meter and Emba did well to power up the sideline for some relief. But a side entry into the ruck saw the Americans cough up possession. With no time on the clock, Ireland set up an attacking scrum, and the ball eventually moved to Murphy Crowe, whose little in-and-out and fend was enough to beat the sideline defense for the corner try and win: 17-14.

The USA now filters into the Plate competition and will play its semifinal against Spain at 1:28 p.m.