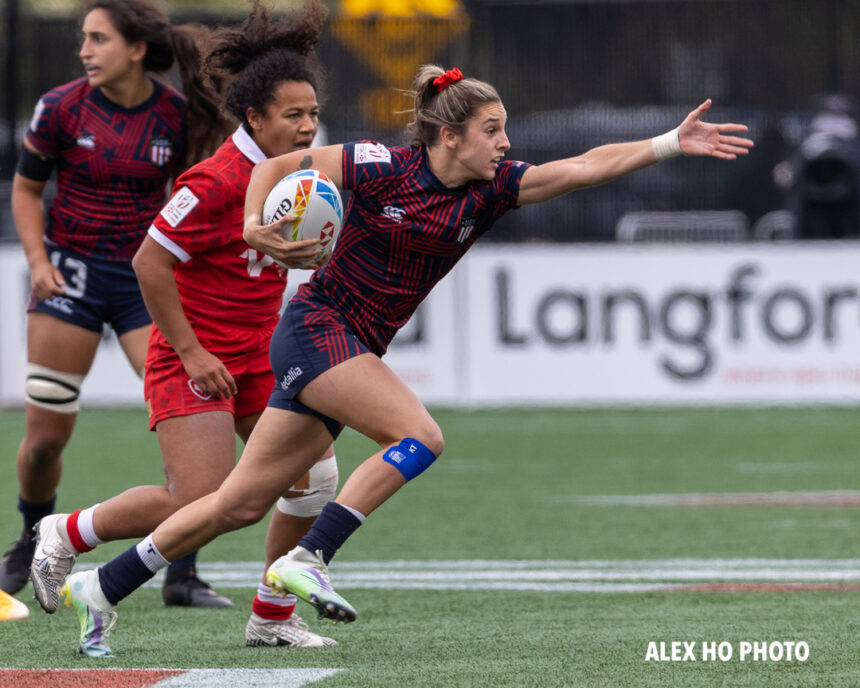 The USA ended the Canada Women’s 7s tournament in 6th place, picking up 10 standings points on the 2021-22 HSBC World Rugby Sevens Series. After going 2-1 in Pool C, the Eagles lost its Cup quarterfinal 17-14 to Ireland and then won its Plate semifinal 17-0 against Spain. Host Canada awaited in the 5th place match, and the hometown crowd was delighted to celebrate a 12-7 victory against its North American rivals. The win marked Canada’s first against the U.S. this season.

Four minutes elapsed before the scoreboard lit up, and a long break from Breanne Nichols set up the game’s first try. Lauren Doyle did a fantastic job chasing down the breakaway and planting the tackle at the line, but Canada sent another three supporters to the tackle and Elissa Alarie sent one pass to Florence Symonds for the easy try, 5-0.

Alarie and Nicholas teamed up for the next big line-break, as the former faked a long pass and the latter cut back against the defense for the sprint into open space. Sarah Levy tracked down Nicholas right at the line and the contact forced a knock-on in the attempted offload. The USA reset with a scrum on its five meter, and playmaker extraordinaire Kayla Canett did a great job of working the defense and releasing Jaz Gray on the wing. Youngster Kris Scurfield had the pace, however, to pull Gray into touch and smother that scoring opportunity.

From the subsequent lineout, Canada just moved the ball down the line to Keyara Wardley, who split Doyle and Gray on the outside and was just too fast for any kind of chase-down. Olivia Apps converted for the 12-0 lead to the hosts.

The second half started well for the USA and some really lovely, wide phases preceded a Kristi Kirshe break along the sideline. Apps had the line and made the crucial tackle into touch at the five meter, but Canada’s lineout went long, and right into Cheta Emba’s hands. The prop punched at the line and then the ball moved quickly to Kirshe on the opposite line for the try. Alena Olsen made the conversion for the 12-7 scoreline, and with four-plus minutes to play. 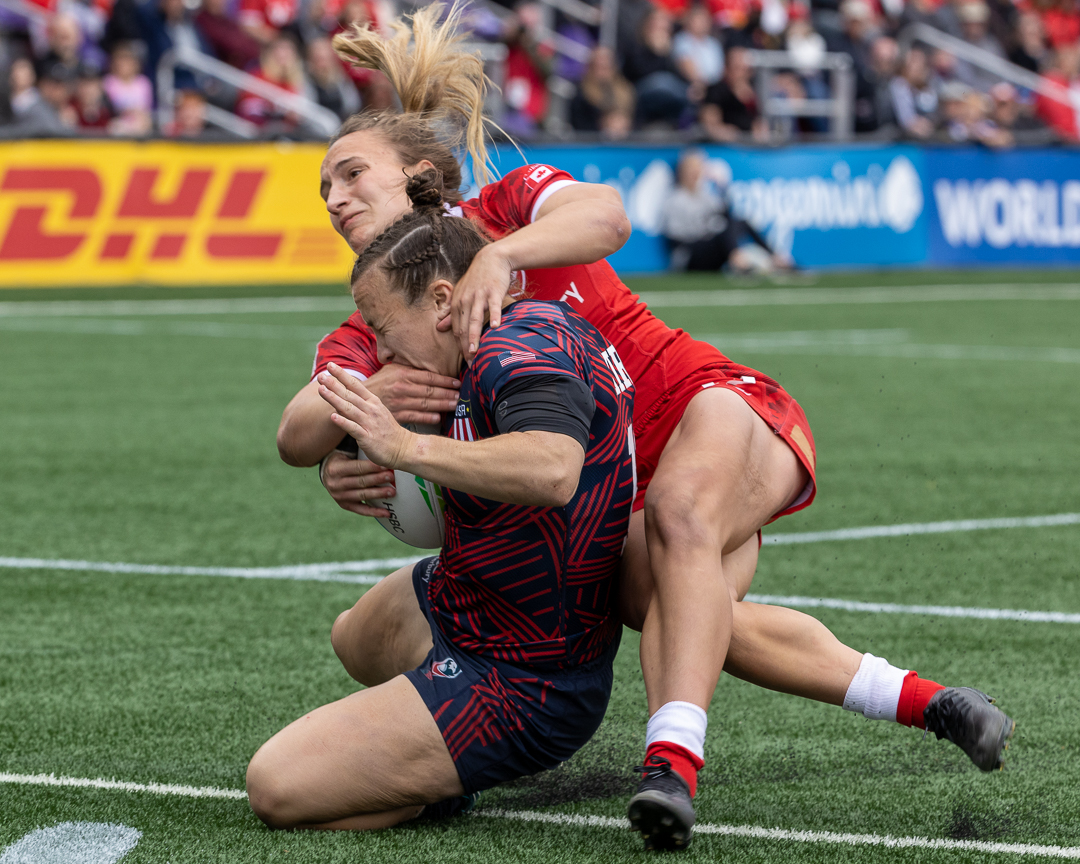 Scurfield was pinged for a high tackle when Kirshe was sliding into the try zone, and so the Eagles had a real opportunity to close in with the player advantage. Canada even knocked the restart into touch and the Eagles had a good lineout from which to build. But a gritty defense forced a mishandling and not-releasing penalty, and the USA gave up an offsides penalty from the subsequent ruck. Canada worked the clock and by the time it reset for that second scrum, it was back to full numbers.

The USA had one more quality opportunity to make something happen, as Kirshe tackled Scurfield into touch and the Eagles nailed their lineout from its 40 meter. But a miscommunication and dropped pass resulted in a penalty and Canada kicked to touch to end the game, 12-7.

The final HSBC World Rugby Sevens Series stop, for the women, occurs in Toulouse, France on May 20-22.