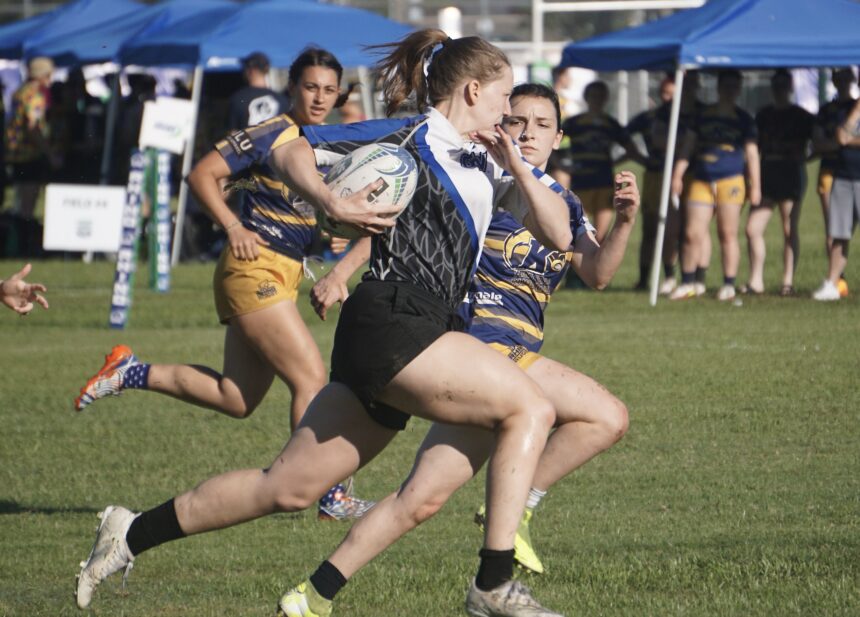 The CRC May Madness 7s has narrowed the title-contending field to four teams, as quarterfinals kicked off action on the LaSalle pitches Sunday morning. The semifinals will be played inside the Shrine on Airline stadium and live-streamed on The Rugby Network at 11:26 a.m. and 11:48 a.m. CT, and victors will contest the final at 5:09 p.m.

Grand Valley State University (GVSU) and Kent State took the pitch at 8 a.m., and the Golden Flashes looked to be the first to score, attacking on the Lakers’ five meter. But then a crucial turnover allowed Samantha Walquist to flex her speed and take the corner for a full-length try. It was a big momentum swing, for both teams, and GVSU added another two tries before Kent State added a converted score: 17-7 the final. 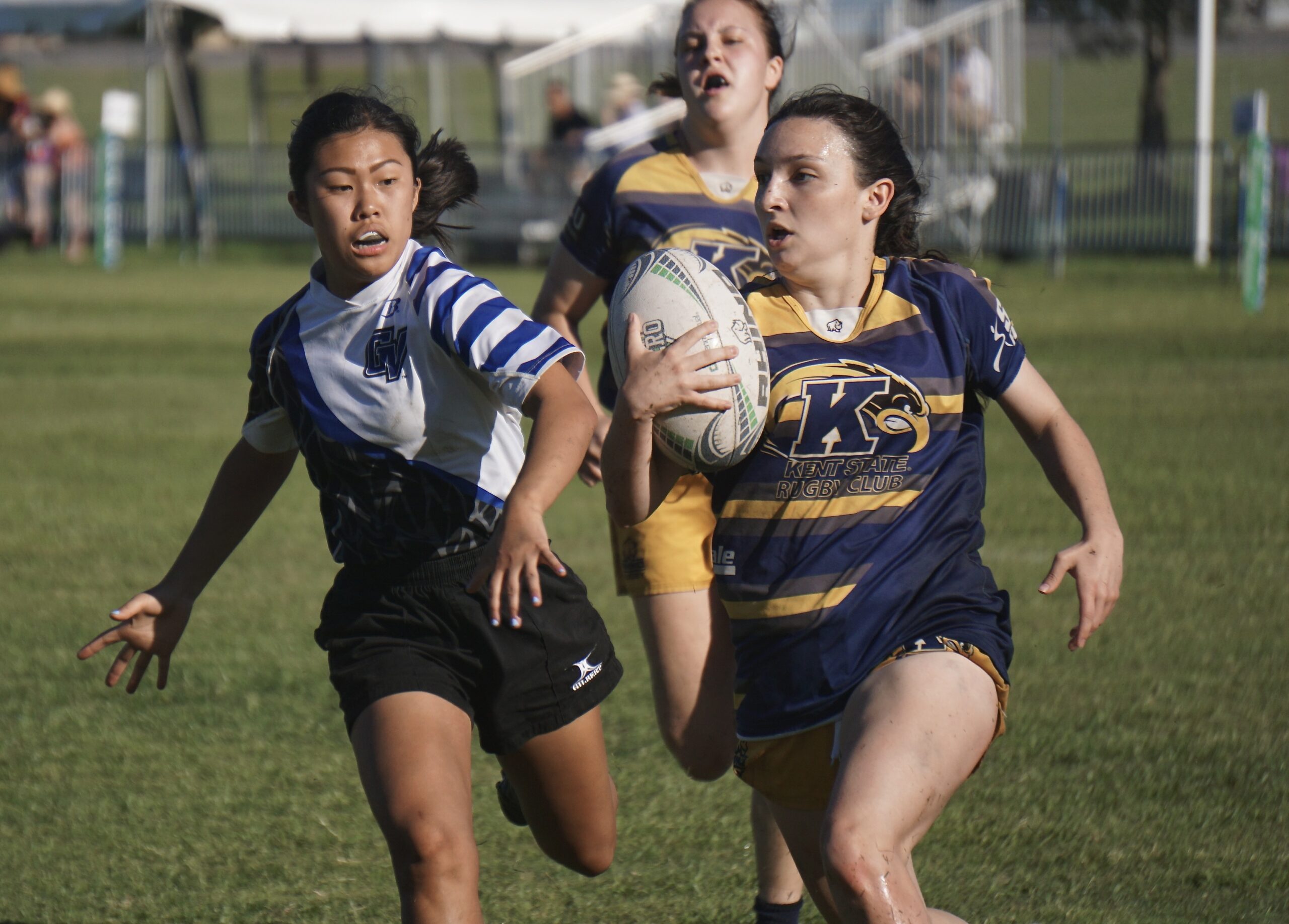 The Michigan team will now play Univ. Wisconsin Eau Claire (UWEC), which battled a relentless Iowa State in its quarterfinal win. UWEC scored back-to-back tries and added a conversion – which ended up being the deciding margin. 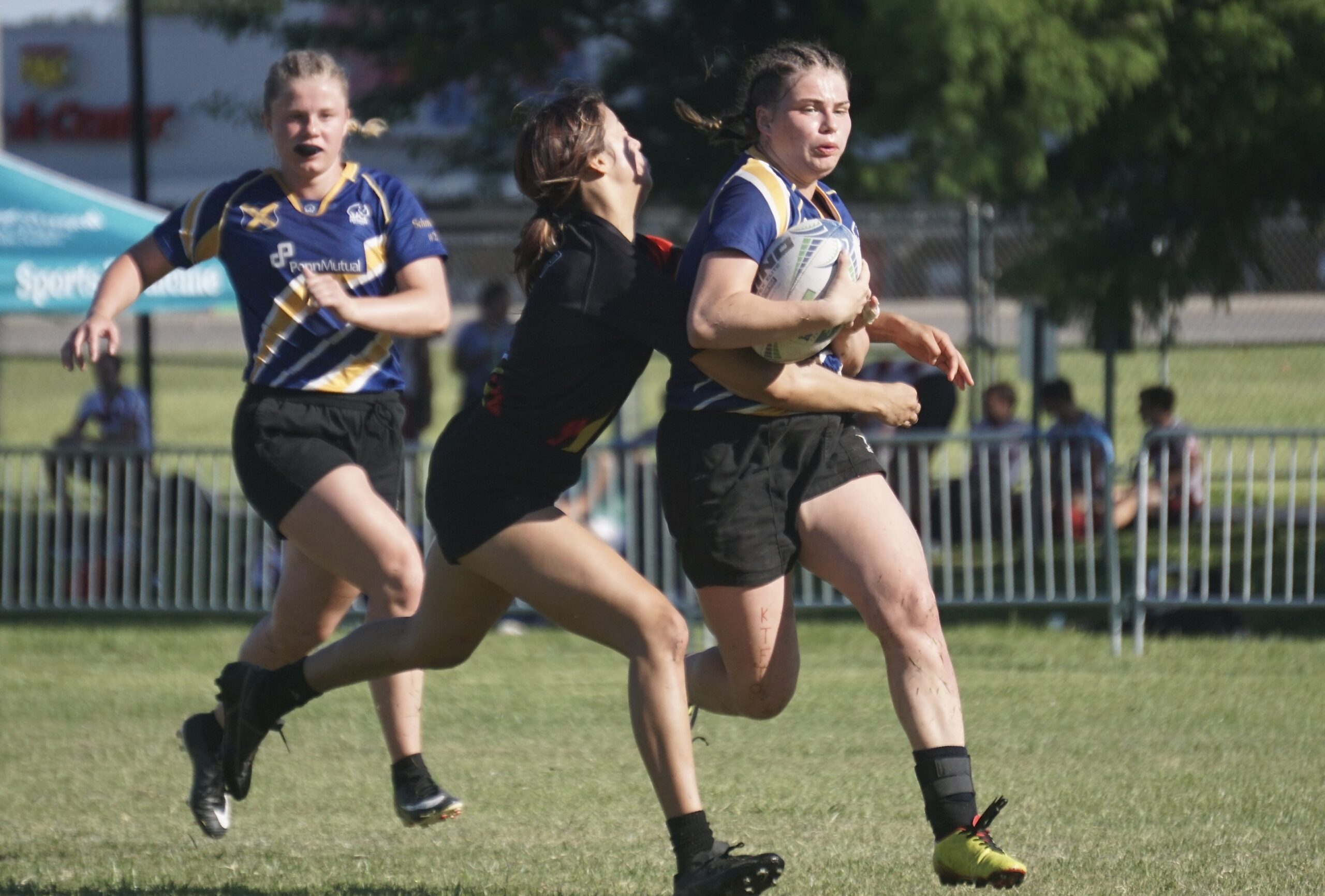 “We started off really strong but after that it was more a pulling-pieces-together sort of thing,” UWEC senior and club president Siusie Dawson said. “[Iowa State] were giving us a lot of drive. They were very intense and there for everything, making their tackles. Just very intense.”

Iowa State then made good use of repeat penalties to score and then tied it up with a second try, but missed both conversions. 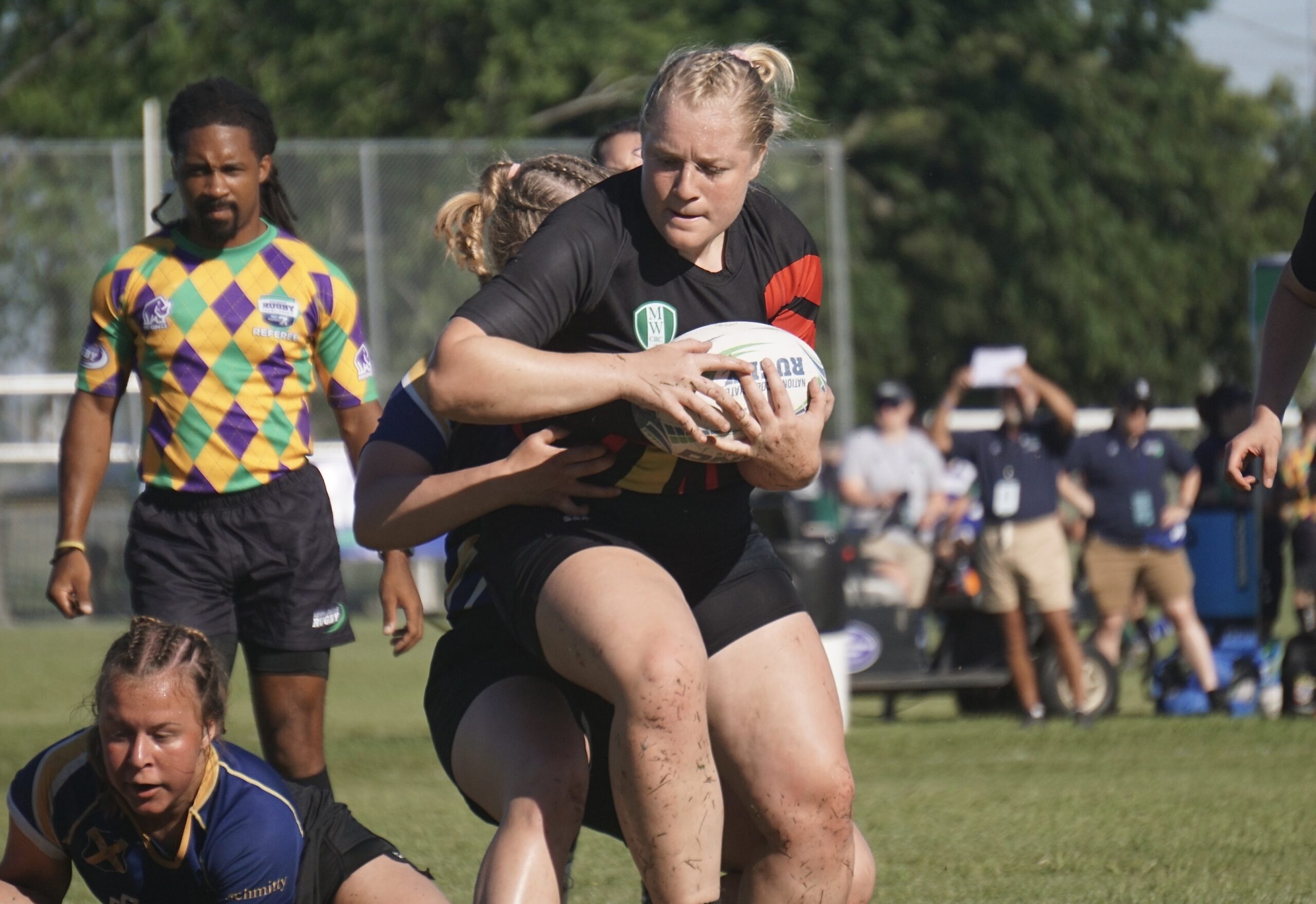 “Izzy Currie as our sweeper in the back line,” Dawson said of the defensive standouts. “She came through on a lot of those tackles in the back field and had a couple of good runs too.”

UWEC held on for the 12-10 win and shifting defense will continue to be a focus as the team readies for its 11:26 a.m. game against GVSU.

The Roger Williams vs. Kutztown quarterfinal was also decided by a conversion, but it was an absolute battle to get any points on the board. The majority of the game evolved without a score, but then the Bears finally powered through for a dive-over score in the final minutes of play, 5-0. 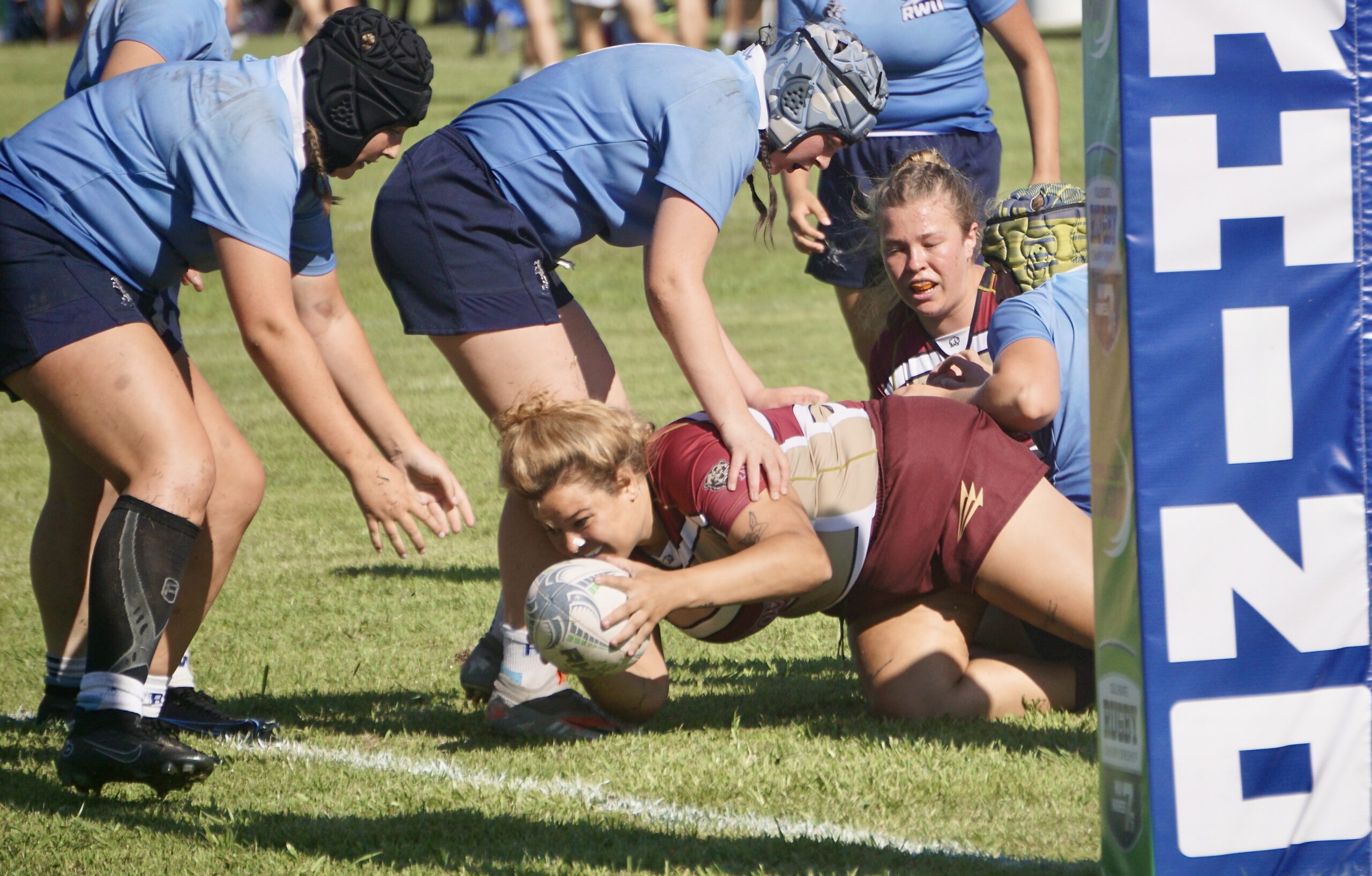 There was very little time left on the clock, but Roger Williams was up for the challenge.

“I think that was the hardest competition we’ve seen thus far int he tournament, so they really made us step it up,” Roger Williams’ Stephanie MacLeod said. “It was an adjustment and we were a little shaky to begin with, but we ended up figuring it out.”

With less than a minute to play, Roger Williams worked the edges to gain ground quickly. 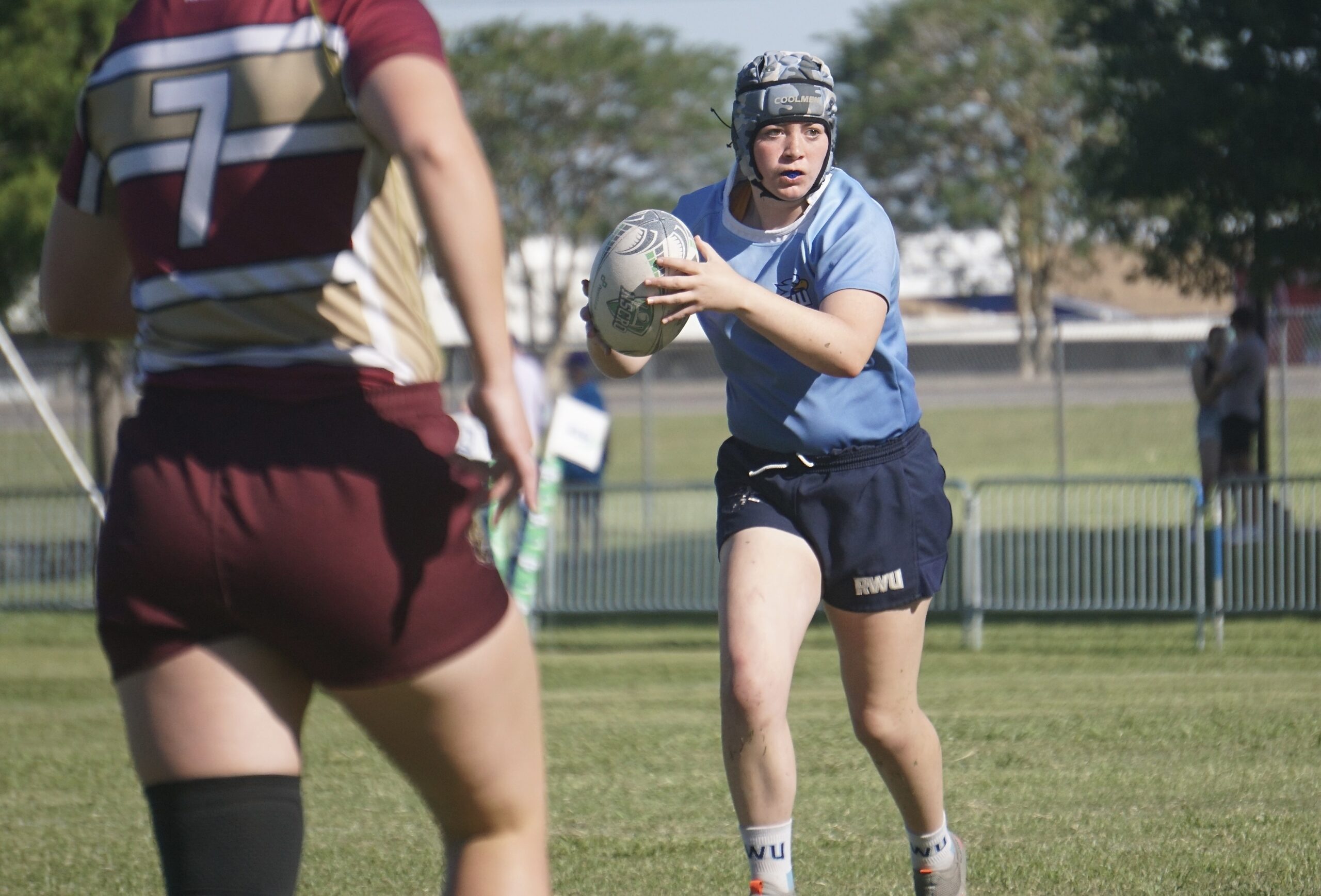 “It’s something that we practice over and over,” MacLeod said of the defense-stretching strategy. “I got the offhand and almost stepped out of bounds but managed to stay in.”

MacLeod scored the game-tying try and smartly circled to beneath posts for an easier conversion, 7-5. The teams set up for the restart but then the ref whistle sounded. Roger Williams moves on and will play Texas, which beat IUPUI 24-5 in the final quarterfinal of the morning. It was a redemptive win considering Texas nearly missed the quarterfinal round. The team’s pool had three teams go 2-1 and Texas finished third, but the team’s point differential afforded the quarterfinal berth.

“We played our first matches [on Saturday] and they went really well,” Texas’ Julia Norwood recapped the tournament thus far. “We had a lot of high energy, and then going into the third [pool play] match we let ourselves get a little too down during that break and went into the third game with really tired legs. We have three subs so we brought 10 people, so we were just exhausted. 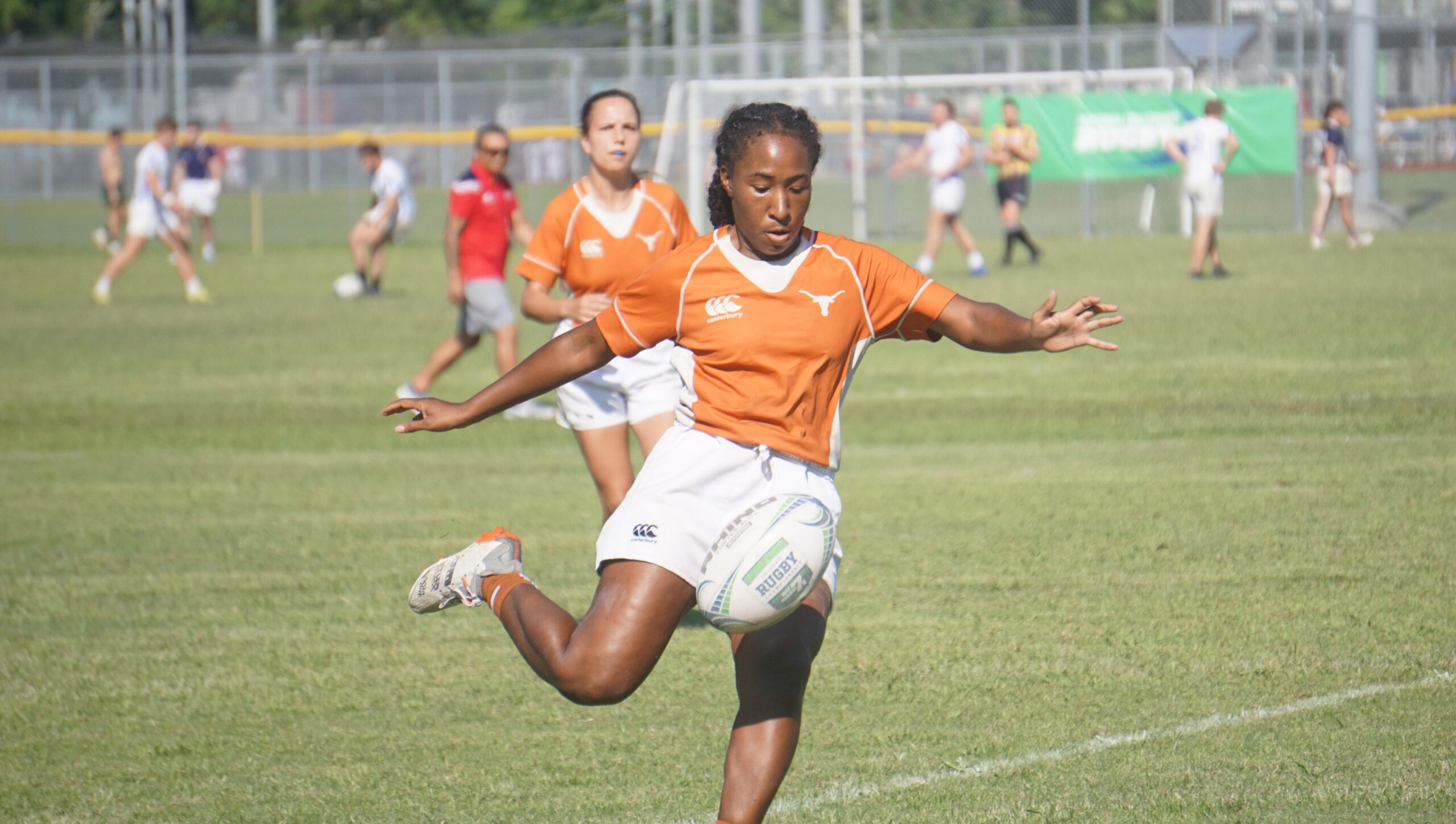 “[B]ut we got into the ice baths last night and had a team chat this morning with a lot of energy and came out saying: We have to go 100% right out of the gate,” Norwood continued.

IUPUI scored the first try of the game, and Texas needed an immediate response.

“From the start we noticed they weren’t playing a sweeper,” Norwood said. “The whole tournament we said, ‘If we want to put a kick in behind them, let’s do it.’ I just went for it. I don’t know who’s going to chase but I’m chasing. I got the good bounce and went in and hit the dive and put the try on the board. It was really fun.”

Norwood’s electric kick-and-chase try energized the team and three more tries followed in the win. Now the Longhorns move to the stadium for an 11:48 a.m. semifinal.