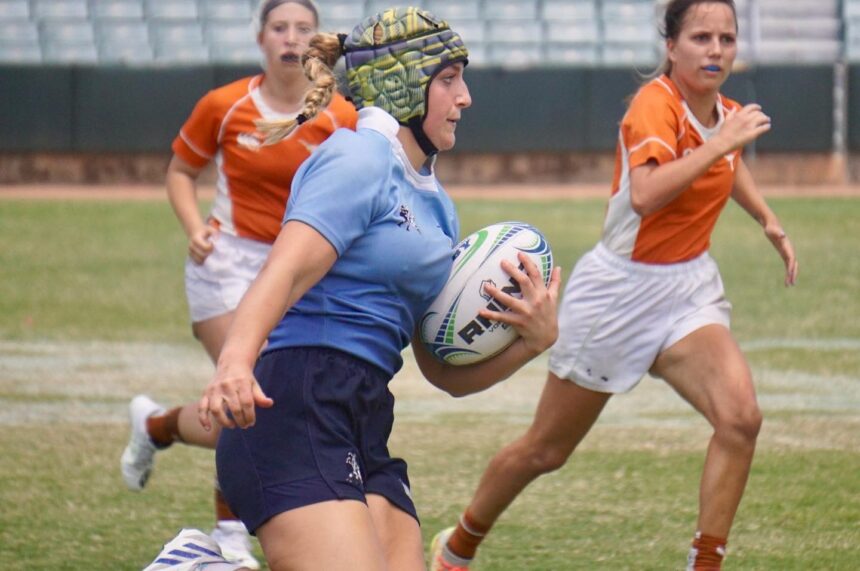 The DI Club CRC May Madness 7s title is down to Univ. Wisconsin Eau Claire (UWEC) and Roger Williams (R.I.), and the duo will take the Shrine on Airline pitch at 5:09 p.m. CT. Watch the live-stream on The Rugby Network.

The two finalists advanced after really trying quarterfinals (read more), and competition wise that same test awaited in the semifinals. The conditions had altered, though, as the DI Club competition made its first appearance inside the rugby stadium and the midday New Orleans sun had really ramped up since the morning matches.

UWEC and Grand Valley State met in the first semifinal, and much like its quarterfinal, the Wisconsin team established a two-try lead. Klayresse Chamberlain and Izzy Currie scored, 10-0, and then the Lakers pulled to win three points after Loren Wilkie scored. The conversion was good for the 10-7 halftime. 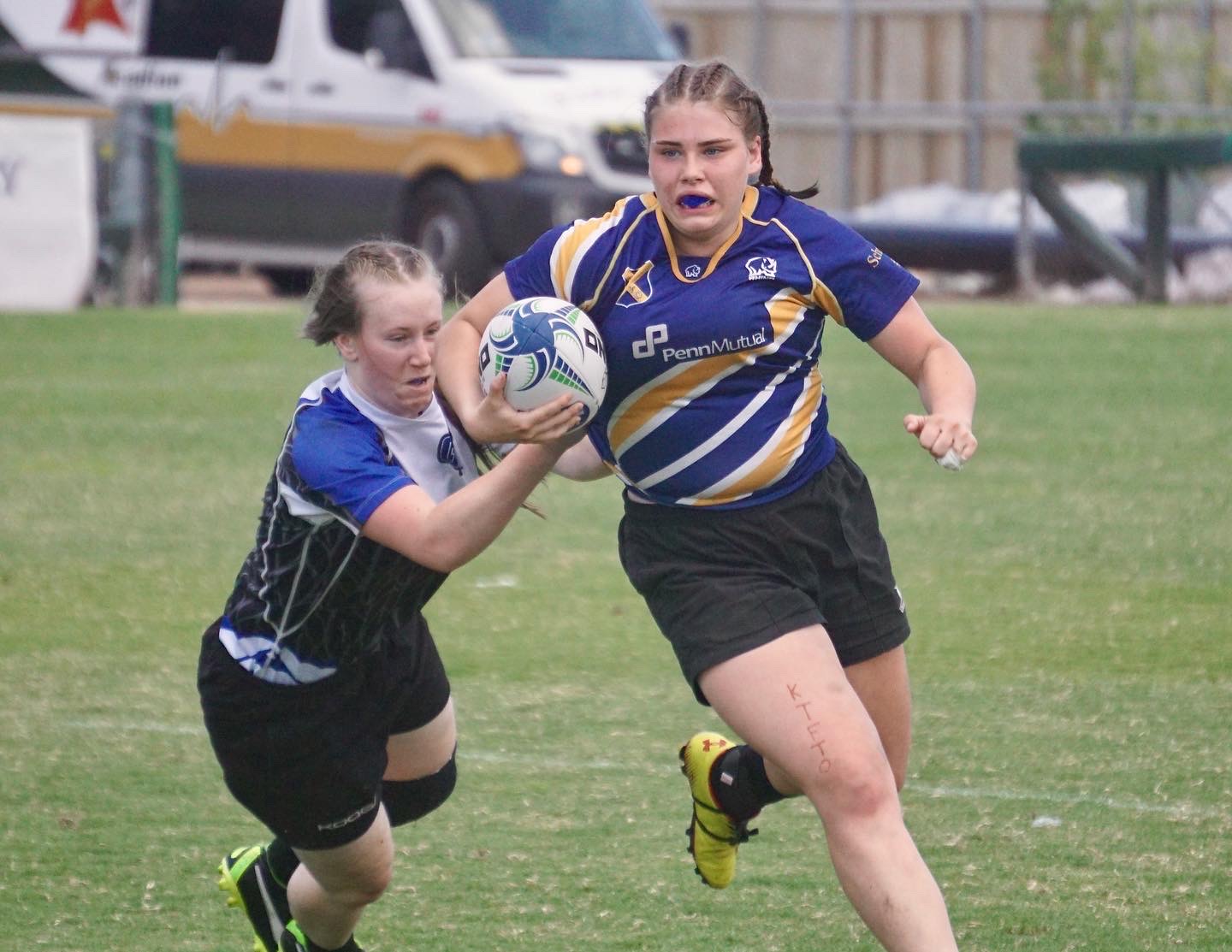 UWEC rode a series of penalties that allowed Lauren Lawston to score (15-7), but again, GVSU answered back, weaving a nice series of sideline offloading to put Wilkie into the try zone. The conversion was again good for the 15-14 edge to UWEC.

“We stayed calm,” Currie said of the team’s reaction to the close score. “We didn’t let it bug us because we know we’re a good team and we got this. We came here not just to play in the stadium but to win the tournament. I mean it’s NCR and we’re going to play as hard as we can.”

GVSU was absolutely hungry for the turnover and one more score. That meant a furious, physical, turnover-heavy series in UWEC’s. The bench was screaming for a kick to touch, but Emma Hamilton, with no time on the clock, scored instead: 20-14 the final.

“It was stressful,” Currie said of the final passage of play. “I could see my team getting anxious and there were a lot of dropped balls. At the end, we really brought it together and we remembered how to play rugby and we had the last try to finish the game.”

Roger Williams and Texas then lined up against each other in the second semifinal. The Hawks had one their quarterfinal at the death and won by a conversion. Texas had beat IUPUI 24-5 to advance. 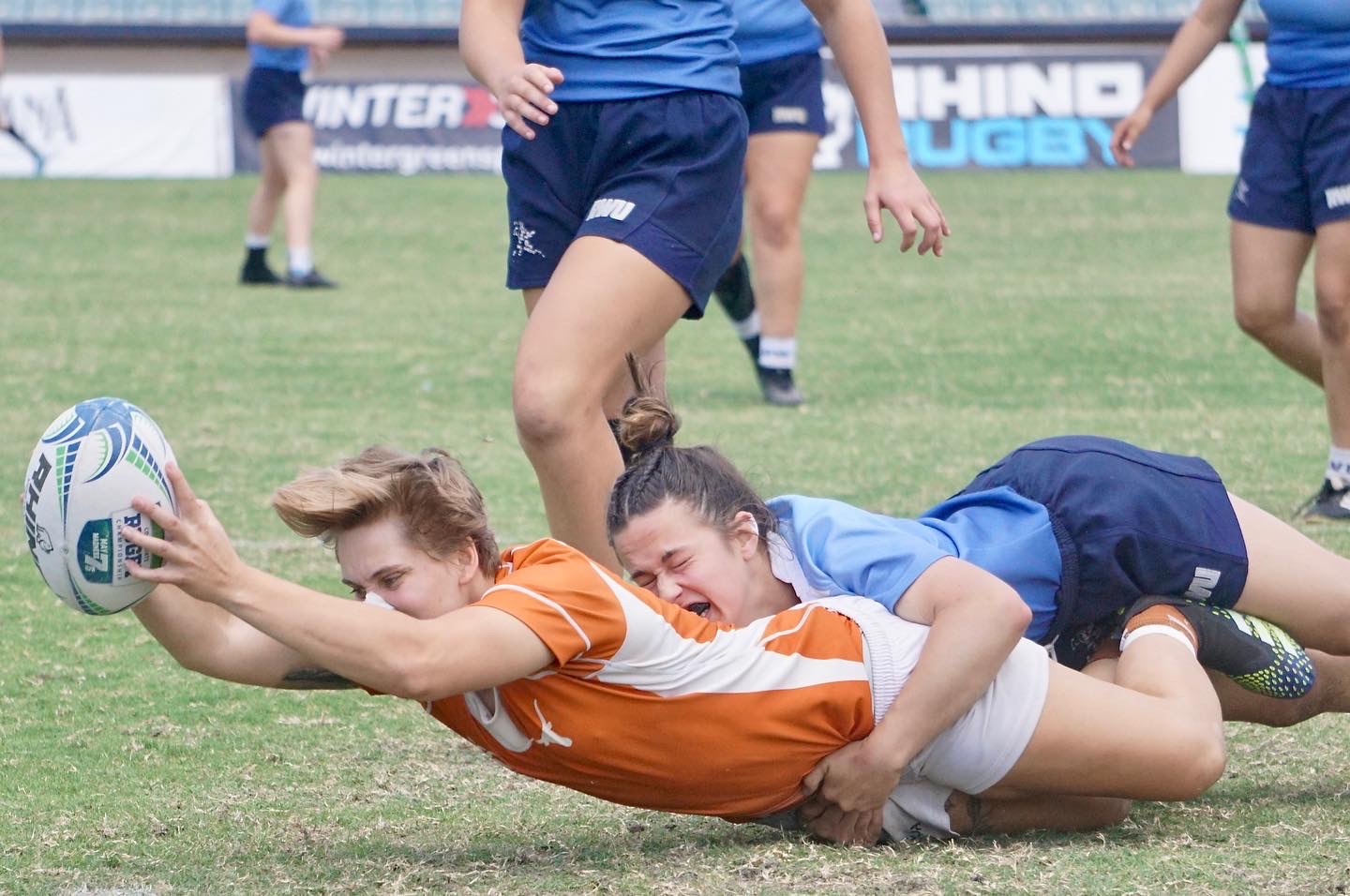 “At the beginning when we were sitting in the dugout, that was our grind time,” Roger Williams sophomore Sarah Gray said of getting the mindset right. “It was, ‘We did all the work to get here. Just use the skills you have and have fun.’ Because that’s one of our biggest goals here, to have fun while we’re playing. If it’s not fun why play rugby?”

The Hawks ran out to a 10-0 lead. Sweeper Stephanie MacLeod was so dynamic as a line-breaker, support runner, finisher and defensive security blanket. She accounted for all three tries and the conversion.

The first score was a singular effort – a line break and then evasive running – and the second came after Roger Williams had a player advantage following a yellow card. Gray tore away on the sideline and handed the ball off to MacLeod in support for the try. 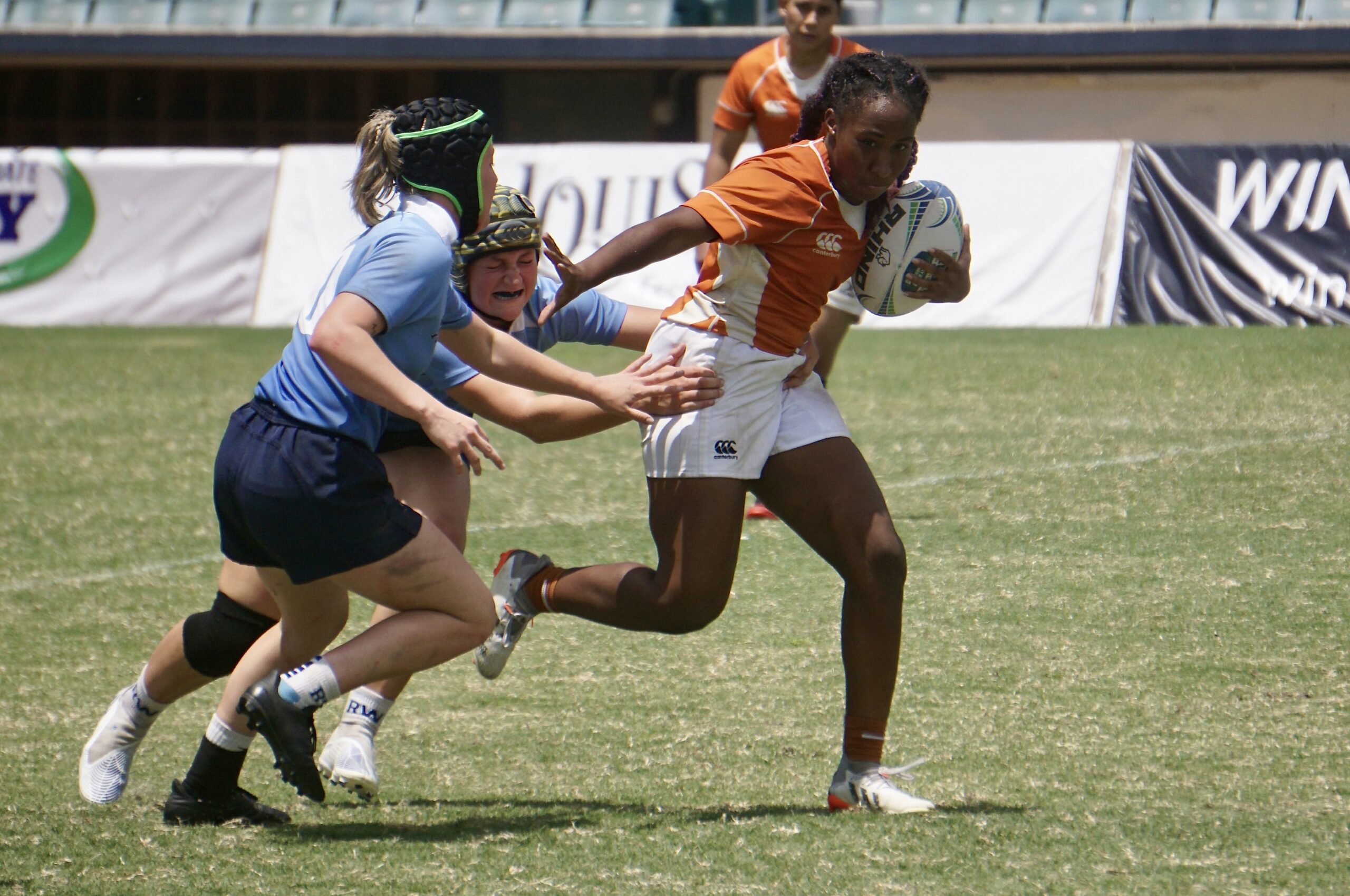 Julia Norwood was equally important for Texas and accounted for both of the Longhorns’ tries. The first came after a teammate’s linebreak, and the second occurred after penalties and a quick tap at the death.

“Texas gave us a lot of strong rucks to push up against and they were also counter-rucking quite a bit,” Gray said. “That’s something we’ve been working on – getting quicker to the rucks – and that’s something that showed today. We didn’t let a ton of poaching happen. They also had some intense speed that we just had to keep up with. I think we did a good job of that especially being in the heat.” 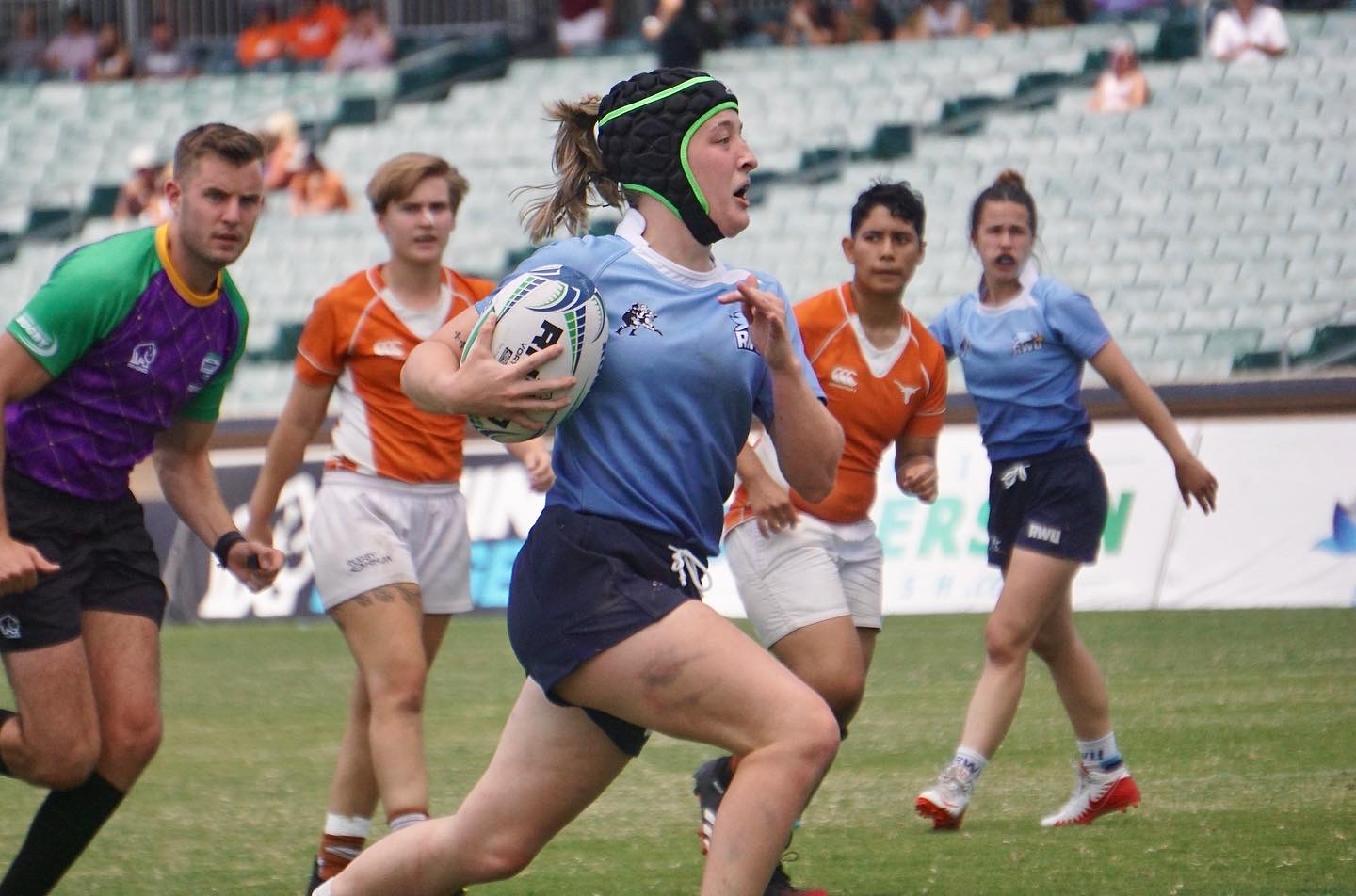 In between Norwood’s two tries, MacLeod added a third try to win 17-10.

“We are so excited to be going to a national championship,” Gray closed. “We’re such a small school playing some of these huge teams. It’s really great to see how we’ve come together for this and worked for this. We stayed on campus for three weeks [after school ended] and it was so much intense training. We came here to give our all because we put in so much work in the off-season.”