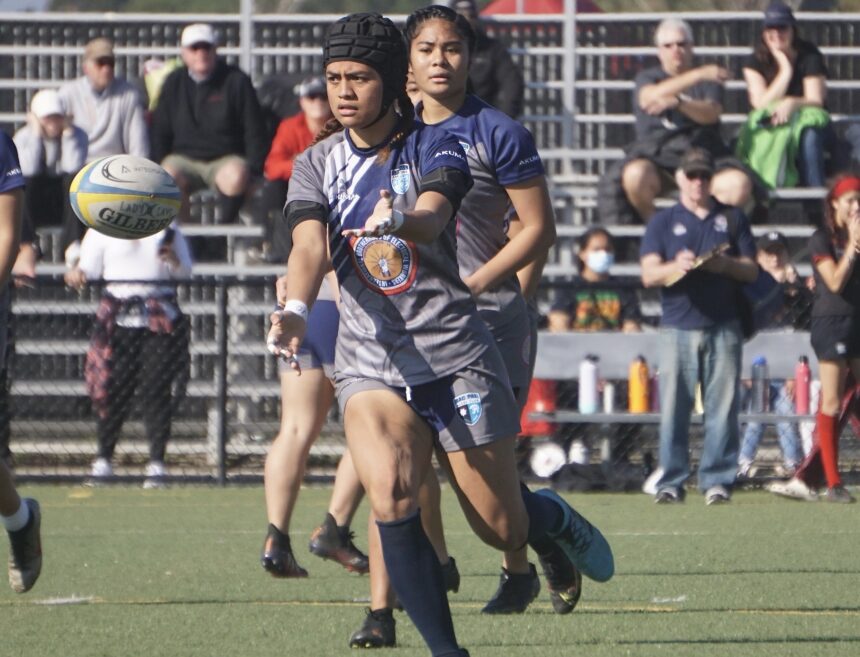 The North American Invitational (NAI) 7s fielded four girls and women’s competitions in Salt Lake City, Utah, hosting 54 teams between the U14, U16, U18 and U23 brackets. The SacPAL Amazons took home titles, while the Utah Lions, The Rugby Advantage and Belmont Shore also celebrated championship runs.

There were four teams in the U23 bracket, and so teams played each other twice and a champion was named. Both the Utah Lions and Rhinos Rugby Academy went 5-1 across two days, splitting games with each other. At the end of day one, the Lions beat the academy side 19-10, and then the first game of day two went 24-12 to the Rhinos. Both sides beat TOA and Badger Academy twice, but the Utah Lions had a better point differential (+92) than the Rhinos (+77) to win the title.

There were six pools in the U18 bracket. Rhinos, The Rugby Advantage, Majestics, Badger Rugby Academy and SacPAL Amazons went 3-0 on day one, while 2-1 Pasefika topped Pool 3 after Pioneer and Lamorinda tied each other. On day two, four teams routed into the U18 Elite semifinals, and the remainder flowed into the U18 Open knockouts.

The Rugby Advantage won the U18 Elite, defeating Atlantis 15-5 in the semifinals and Utah Cannibals 21-17 in the title bout. TRA is coached by Ryszard Chadwick and assembled a squad that represented California, Colorado, Idaho, Illinois, Massachusetts, New Jersey, New York Pennsylvania. All but one player had been in residency in New York City since July 10.

Atlantis finished third with a 36-5 win against the Badger Academy.

In the U18 Open, the final pit the two High School Club National Championship finalists against each other: SacPAL Amazons and Majestics. The Amazons advanced to the title bout with a 31-7 win against Pasefika in the quarterfinals and 38-0 semifinal win against the Sacramento Harlequins. The Majestics bettered Provo/Wasatch 24-5 in the quarterfinals and Rhinos 17-14 in the semifinals.

The U18 Open Cup final brought the same intensity as the national 15s championship brought, and the SacPAL Amazons again triumphed, this time 19-17. It’s also worth noting that the U18 Open finalists beat Elite teams during pool play. The Amazons topped the Utah Cannibals 27-5 on Friday, and the Majestics defeated Atlantis 33-21. The Rhinos finished 3rd with a 22-0 win against the Harlequins.

Twelve teams competed in the U16 bracket, and Atlantis, Belmont Shore and Rhinos went 3-0 to top their respective pools on day one. Saturday’s final was a SoCal vs. NorCal showdown, and a rematch of a pool game between Belmont Shore and SacPAL Amazons. In the teams’ first meeting Belmont Shore won 36-7, but the Amazons had been growing in strength through Saturday.

After topping Pasefika 24-10 in the quarterfinals and Atlantis 14-10, the Amazons were ready for their rematch. Belmont Shore advanced to the final after beating Singapore Valkyries 22-14 and Rhinos 50-0 in the quarterfinals and semifinals, respectively. The fnal was a much closer affair but the SoCal side had the legs to finish off a 19-10 win against the Amazons for the U16 trophy.

The U14 final featured the same teams from the U18 Open championship: SacPAL Amazons and Majestics. The two went 3-0 during pool play, as did Belmont Shore. Atlantis won its pool with a 2-1 performance Friday. SacPAL went toe to toe with Rhinos in the quarterfinals, 17-14, and beat Mountain Ridge (which beat Atlantis in the quarterfinals) 36-10 in the semifinals. The Majestics topped USA West 22-0 and Belmont Shore 26-5 during the first two round Saturday to advance to the final.

The SacPAL Amazons triumphed in the championship, 29-12 against the Majestics, to finish the NAI 7s with two first-place trophies.

EIRA Names U16, U18 Rosters for Munster Matches