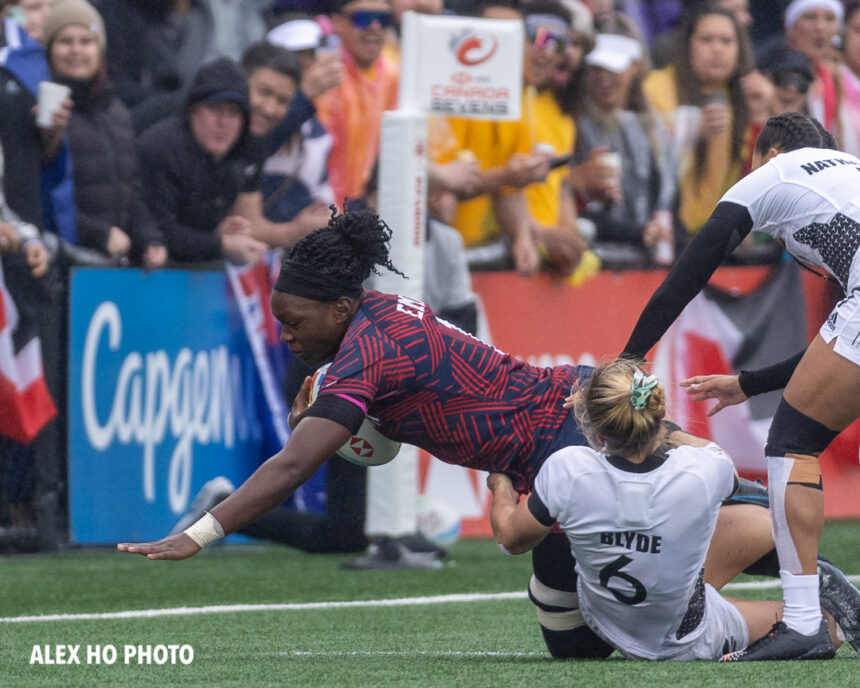 New Zealand and the USA met in Round 2 of the Canada Women’s Sevens, the fifth stop on the HSBC World Rugby Sevens Series, and the Black Ferns dominated in a 36-0 win. The Eagles will close out pool play against England at 4 p.m. PT.

New Zealand kept the opening kickoff and looked ready to score as Alena Saili cut back inside the defense, but Alena Olsen made the diving tackle and at the 10 meter. Kristi Kirshe was well positioned to get hands on the ball and draw a not-releasing penalty, which allowed some pressure relief – initially. The kick didn’t go to touch and the defense was slow to chase, so New Zealand launched the ball to the opposite sideline for a fast try through Michaela Blyde. Tyla Nathan Wong converted for the 7-0 lead.

An error on the restart allowed New Zealand to push the Eagles back to its five meter, but a set of penalties allowed for some breaks in the intensity. Unfortunately the U.S. wasn’t able to run the ball out of its 5 meter, and when the team did get to the 15 meter, a penalty followed. The Kiwis reset with an attacking scrum, and Nathan Wong looped off the back to attack the short side with Kelly Brazier and Blyde, who scored in the corner, 12-0.

An unforced knock-on put the ball in New Zealand’s hands again, and Nathan Wong so smartly saw Olsen start to cheat to the strong side and subsequently darted down the short side again, winning the foot race to the try line: 17-0 into halftime.

The Black Ferns duplicated the three-try effort in the second half. Thirty seconds in, Portia Woodman was in the try zone for the first of two scores. Minutes later, Nathan Wong booted the ball into the unguarded back field, and Shiray Kaka caught the ball on the bounce and at full pace. Sarah Levy planted the pursuit tackle but the recycle moved wide to Woodman: 29-0.

The game ended with an intercept try from Kaka, and Nathan Wong’s third conversion: 36-0. New Zealand has been absent from this season’s series, and the team’s absence has been felt.