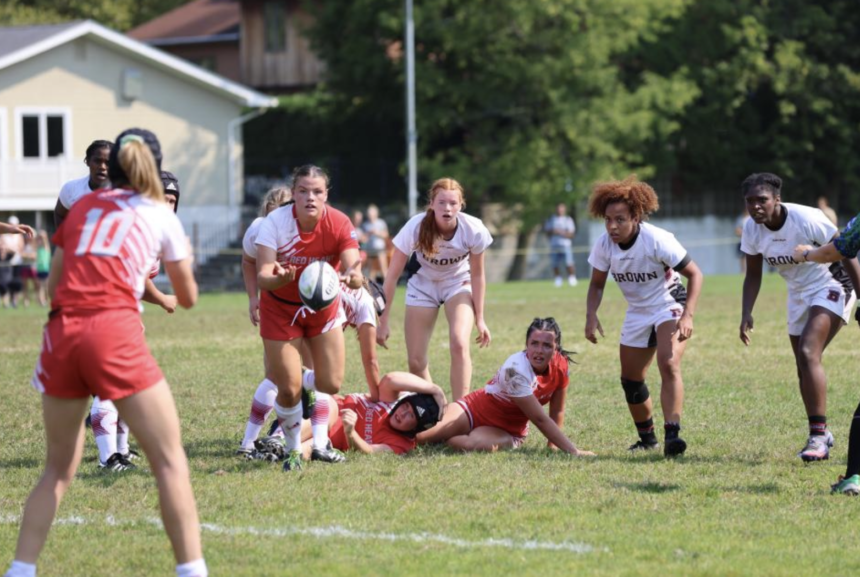 In Division 1, three of the four scheduled matches took place, while Long Island University canceled its second-straight game. The Sharks are adapting to a very recent coaching change.

The game of the weekend occurred between Sacred Heart (1-0-1) and Brown (0-1-1). The Bears went up 12-0 on tries from Akilah Cathey and Mahdia Parker and a Julia Murray conversion. The Pioneers closed in via a Makinzie Youngblood try, and conversion and penalty kick from Aly Cunningham. Brown led 12-10 into the break.

A Noelle Lewis try and Murray conversion gave Brown a 19-10 edge early in the second half, but then Sacred Heart rallied with back-to-back scores to take a 24-19 lead into the waning minutes of the match. It was looking like a Pioneers’ victory until Murray bust through the defense for an 80th-minute try: 24-24 the final.

Harvard (1-0) contested its season opener and downed Quinnipiac (1-1) 48-19. The Crimson freshmen showed very well, scoring six of the team’s eight tries. Lennox London dotted down the first three tries of the game, and then fellow freshman Cam Fields scored the first of her two tries on the day. Freshman Tiahna Padilla logged Harvard’s final score of the first half, and with Brogan Mior’s conversions, the Crimson led 31-0.

Quinnipiac got on the board before the break, as Riva van der Valk scored and Abbey Terpstra converted, and then scored the next two tries of the match through Addison Walker and Hazel Bice. With Terpstra’s conversion, the Bobcats only trailed 31-19 with nearly 30 minutes to play.

But the Crimson picked up the scoring from here, sending Fields, senior Cassidy Bargell and sophomore Chloe Headland into the try zone. Headland added a conversion for the 48-19 win.

Also in D1, Army improved to 2-0 after a 87-0 win against NIRA newcomer Princeton (0-2). Freshman Alissa Eisenhart led all point scorers with 24 points on a try, eight conversions and a penalty. Codi Butt followed with 17 on three tries and a conversion, and leads the Black Knights in tries scored (5). Cecilia Ollis (2), Christina Ellis (2), freshman Ellie Kearney and Katelyn Woenker, and Gillian Scott, Jeannie Skidmore and Shade Fullerton-Sander all tallied tries in the shutout win.

The Division 2 game between Davenport University and West Chester was postponed to Nov. 5. The Panthers will play their first game this weekend against McKendree but will have to wait for its NIRA debut until Oct. 1. That’s when Davenport travels to Rochester, N.Y., to face reigning D2 national champion AIC. The Golden Rams played 7s against Alderson Broaddus in Week 1, and will travel to D2 Univ. New Haven for a Sunday fixture.

Bowdoin College and the Univ. New England saw each for the first time since the D3 national championship, and the Polar Bears won 31-7. The Maine side scored 24 points before UNE snapped the shutout with a Liz Cogan try and Salma Bezzat conversion. Bowdoin put Saniya Ridley (2), Jorja Markella and Rebecca Vakarau and Maggie Norton away for tries, while Lauren Eisenhart kicked the extras. USA U20 player Ella Slaby led teammates with 18 tackles. Bowdoin also won the B side match 34-0.

D3 Queen University of Charlotte ran out against the provisional division’s Guilford College, winning two 7s matches by a combined 78-0. [Read more about the Quakers’ debut in NIRA]