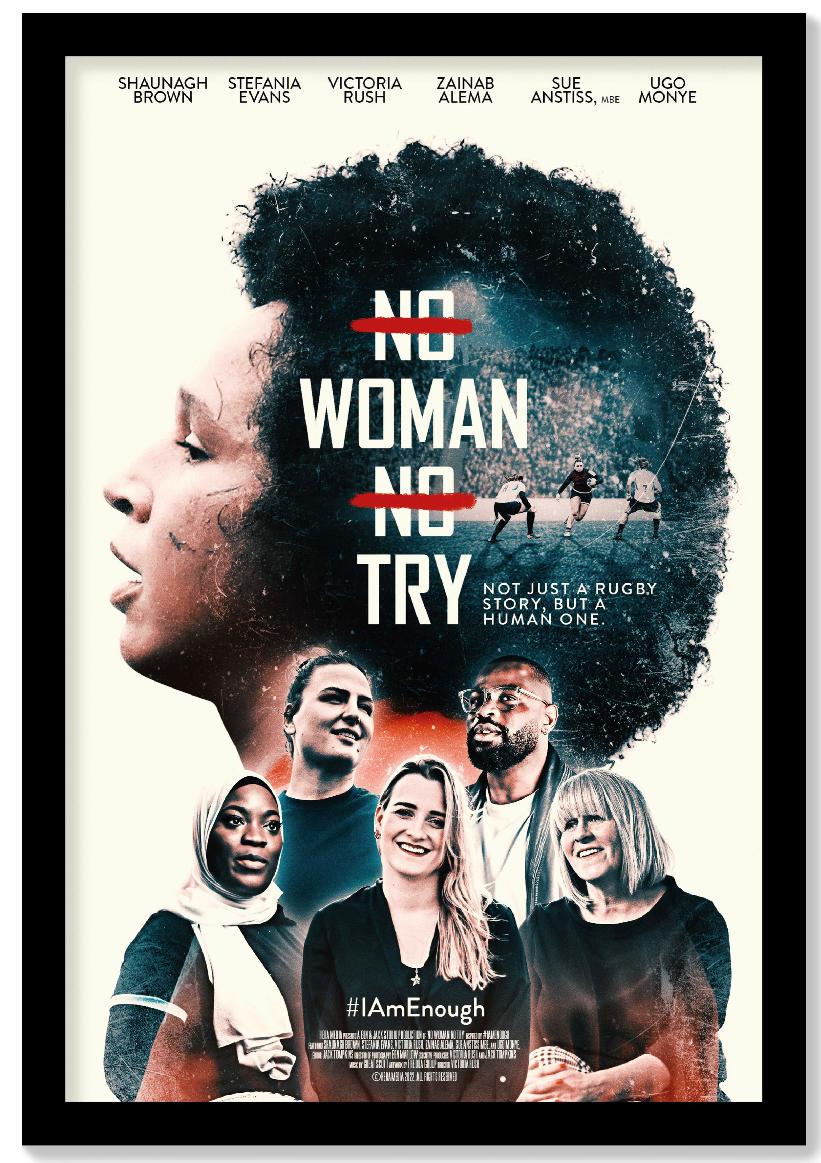 No Woman, No Try is a women’s rugby documentary that discusses the sport’s current challenges and triumphs, and delivers these messages in a high-quality, aesthetically pleasing package. The viewer, whether totally new to the sport or a rugby long-timer, will not only learn something but also be entertained, creating a round, valuable product that is easily consumed.

Watch No Woman, No Try on Amazon Prime Sport (U.S.)

Ruggette CEO Stef Evans is a cast member, and her professional expertise shapes a conversation around the business of women’s rugby. Evans created a women’s rugby apparel company after first, and then forever after, doing the market research and understanding the appetite of those in and around the sport. She is also a friend to No Woman, No Try director Victoria Rush, who is a content producer for O2 Sport and England Rugby.

“She’s a f**king all-star,” Evans praised Rush’s directorial acumen. “I feel quite lucky to be involved with it.”

The film premiered on March 25 via Amazon Prime Sport, and Evans is processing the waves of feedback.

“The number one thing I find myself talking about after people have seen the film is the perceived package of women’s rugby and the perceived value to the consumer, whether that be a screen-based consumer or in-person consumer,” Evans said. “A lot of the perceived value of any product of entertainment has a lot to do with the packaging around it.”

Evans explained that the majority of the discussion around equality in women’s sport and women’s rugby focuses on the on-field action. What is the quality of play? How professional are the athletes? How many knock-ons were there?

“Those are the sort of performance metrics … that get cited as reasons why women’s rugby isn’t very good. But they’re usually not accurate evaluations,” Evans said. “A lot of the criticisms and therefore the reasons why people want to say [women’s rugby] isn’t as entertaining [as men’s rugby], or the reasons why people want to say why it hasn’t earned more than it has as a community, has to do with on-field performance and how they perceive that to be part of its value.”

So what factors influence an audience’s perception of value?

She applied the same notions to the on-screen consumer and the production of a typical men’s game in the Gallagher Premiership.

“If you take away all of the accessory angles, all of the extra cameras shooting it – and by that I mean the cameras that aren’t just the basic wide angle shots of the game itself – it becomes quite dull,” Evans continued. “Because a lot of the extra cameras they have … are zooming in on people’s faces and capturing reactions from the coach when there’s a contentious call, or the front row after a scrum penalty. Or they’re zooming in with a slo-mo replay for when the game’s stopped. They’re interesting stories that you get to see and be a part of that you wouldn’t get to see on one basic wide angle, which is what our sport is usually communicated with.”

No Woman, No Try filmed action from the 2020-21 Allianz Premier 15s season, focusing namely on the Harlequins and England star Shaunagh Brown. Evans noted that the quality footage was an oft-repeated piece of positive feedback from viewers.

“It looked cool because it’s shot cinematically, the way it’d be shown as a slo-mo replay at a game, or presented in a way that the men’s game is presented,” Evans explained. “Those [women’s Premier] games aren’t exceptional – they get played multiple times every week – they’re just not presented in the same way that the men’s games are. And that’s a perceived value thing. What’s happening on the field isn’t drastically different. It’s just the packaging around it and the perceived value of it changes to the consumer.”

Evans can feel the pushback. She knows that those who are immersed in the sport believe that the next rung on the ladder will be achieved through sport-based gains, but that that viewpoint is a blinder.

“A rugby game is a day out,” Evans said from the audience’s perspective. “It’s no different than going to a concert or a movie, or anything you’d do for entertainment. And when you look at it from that angle, you see a lot of the support systems that we’re not currently investing in for the women’s game. That’s a long list, but they’re not just how many people do we have on staff? Or who has a full-time doctor? It’s the packaging of the product that is really lacking behind and in need of the biggest investment – one of biggest things that’s holding back a growing fan base and growing consumer base.”

The cast and crew for No Woman, No Try is based in the U.K., but Evans has lived in the U.S. and played with Beantown in the Women’s Premier League. She sees plenty of action items for communities that have fewer resources than England but equal passion. Stay tuned for Part II.