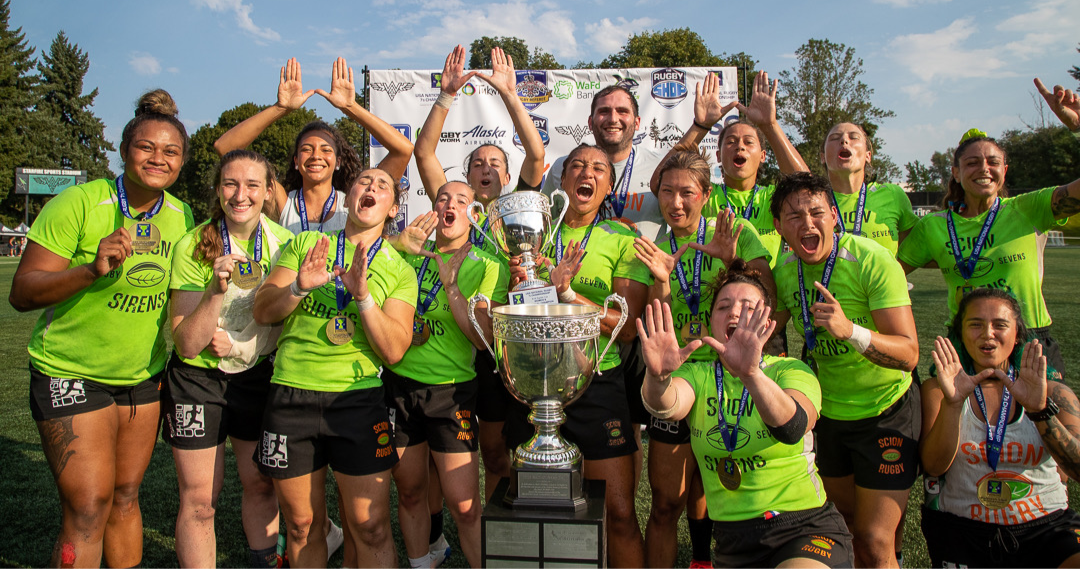 “Kudos to the fans in Seattle for putting on a great tournament and to Life West for a tremendous tournament that they played,” Scion veteran Lauren Rhode said. “We talked all weekend about building and putting together the different pieces of our game, and I thought we were able to do that right at the end.

“For us, it was all about just getting the whole rugby community back out and playing,” the flyhalf continued. “We actually started the season off by holding a clinic for anyone in the entire D.C. area, just trying to get any women back out to play and on the pitch. So to go from there, when we still weren’t even sure – that was early June, I think – if we were going to have a 7s season, to here, is amazing.” 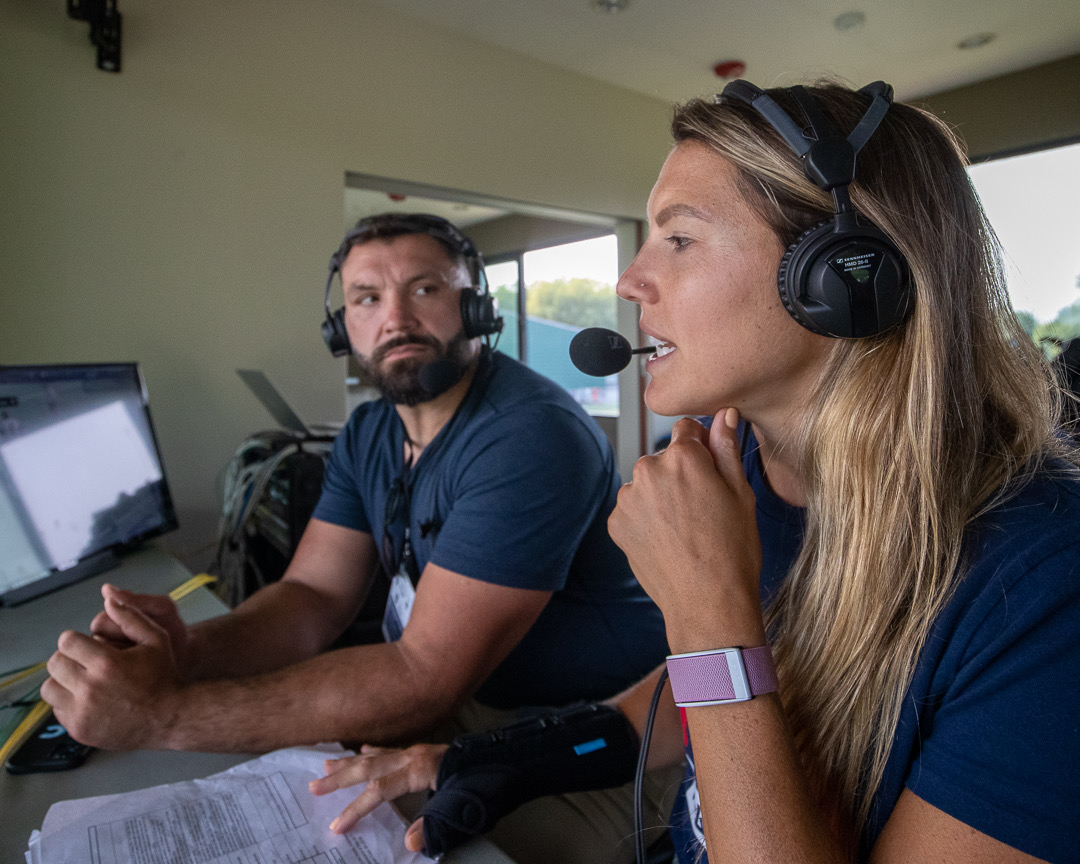 The Starfire Sports stadium was packed, and in addition to the national anthem, a moment of silence was observed for Kandis Ruiz, a beloved rugby member and Marine, wife, mother and much more, who passed on Aug. 10.

Life West sent the opening kickoff and followed it with a very aggressive defense, but Scion was ready. Players leaned on quick hands to move the ball just before impact, and the execution of those skills allowed play to move out of dangerous territory early on. The Gladiatrix were a little too quick off the line at one point, and an offsides penalty allowed Scion to reset. Nice connections between Camille Johnson, Rhode and Jade McGrath put the eventual championship MVP into the try zone. Kimber Rozier added the conversion for the 7-0 lead. Both Rozier and Rhode were lights-out with their sideline dropkicks this tournament.

Life West did not handle Scion’s restarts well. On back-to-back occasions, Rhode kicked the ball deeper and very close to the sideline, and Life West mishandled the receipt before it went into touch. On the first instance, the subsequent lineout led to a Jess Lu try out wide, which Rozier converted. 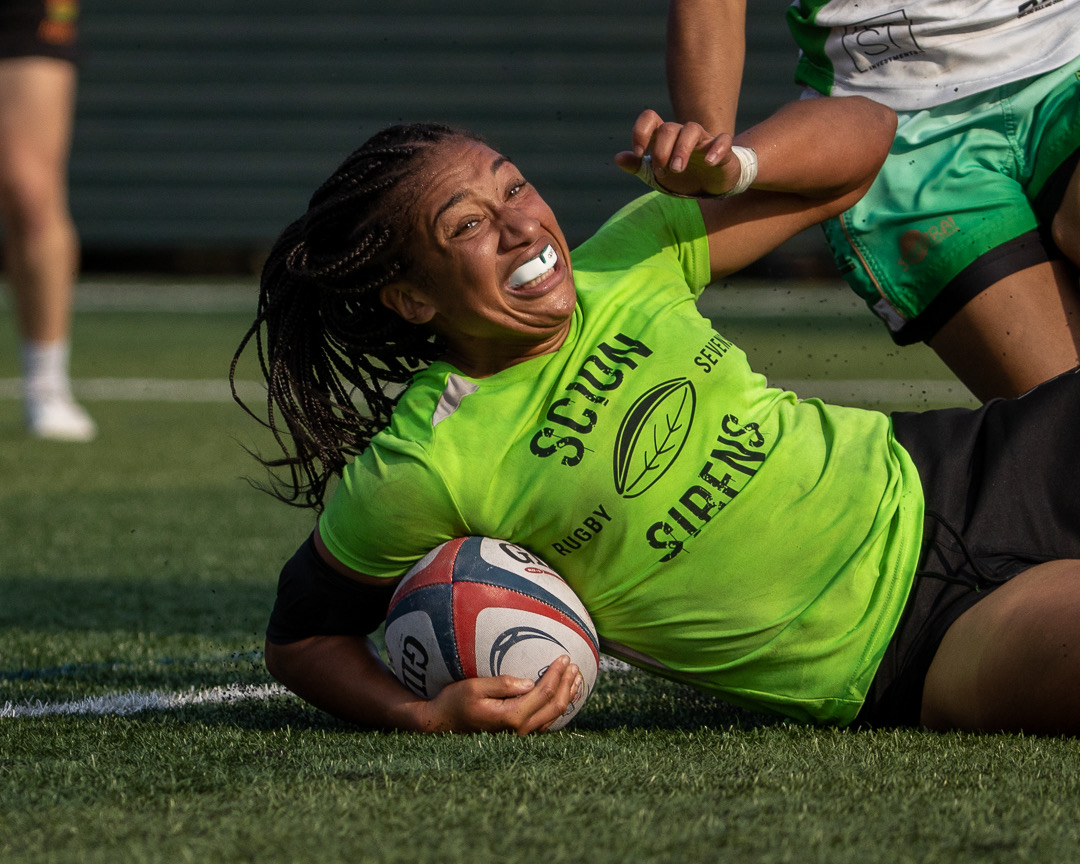 The second instance also set up an advantageous lineout, but Life West stole that set piece. The Gladiatrix followed with some big collisions in the middle in the pitch, as tough carriers like Hope Rogers-Dellermann, Leila Opeti, Rachel Pau’u, Bianca Pallen-Ortiz and Nicole Strasko ran with purpose. But a turnover put Scion back on attack, and McGrath, Rozier and Meschisi connected at high speed to get to the try line. Meschisi was denied just short of diving over but Rozier worked the recycle across the line: 21-0 with the Rozier extras.

“A big focus for us was we knew they were a big, strong, powerful team, so it was matching their physicality and then playing our brand of 7s,” Rhode said. “It’s a game of 7s that comes from generations through our coach, Toshi [Palamo], to us, and it has pieces of rugby from all around the world, so hopefully we were able to give it a good show there at the end.”

Scion played really good defense, from sideline to sideline, and even as a couple of penalties started to surface, play stayed deep in Life West’s end. The half did end with a Johnson shoulder injury, but no damage done in terms of the scoreboard. 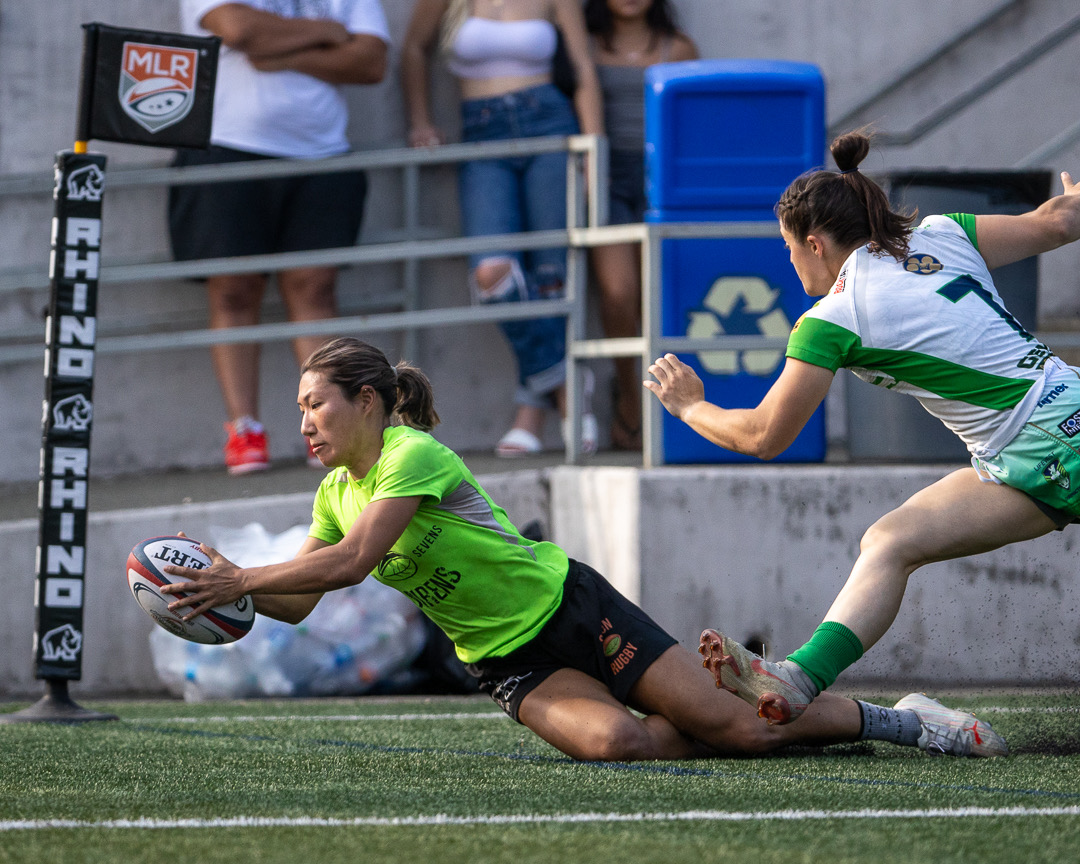 Jess Lu’s back in the try zone / Photo: Alex Ho

The second half started with more miscommunication on the kickoff for Life West, and a knock-on put Scion in good attacking position. The Gladiatrix, however, had the best scrum in the tournament and nearly put the Sirens off their ball, but scrumhalf Bridget Kahele did well to dig it out and tear down the weak side. Amy Bonte, as always, was there for the clean-up – important, considering the absence of the injured Nene Persinger – and halted Kahele, then Meschisi, from going over. But a third attempt was deemed a try: 26-0.

Scion was penalized at the next restart, putting the ball in Life West’s hands at the 50. Rogers-Dellermann went big into contact, and won, spectacularly, but the next pass resulted in a knock-on. Life West couldn’t hold onto the ball for very long. From the scrum, McGrath sent a well timed pass to Lu, who dotted down her second try of the game. Rhode made the stellar conversion from the sideline: 33-0.

The final score came after Life West was attempting to run out of its end but penalties halted that drive. From the 22 meter, McGrath just carved through the defense for another try, which Rhode converted: 40-0 the final. 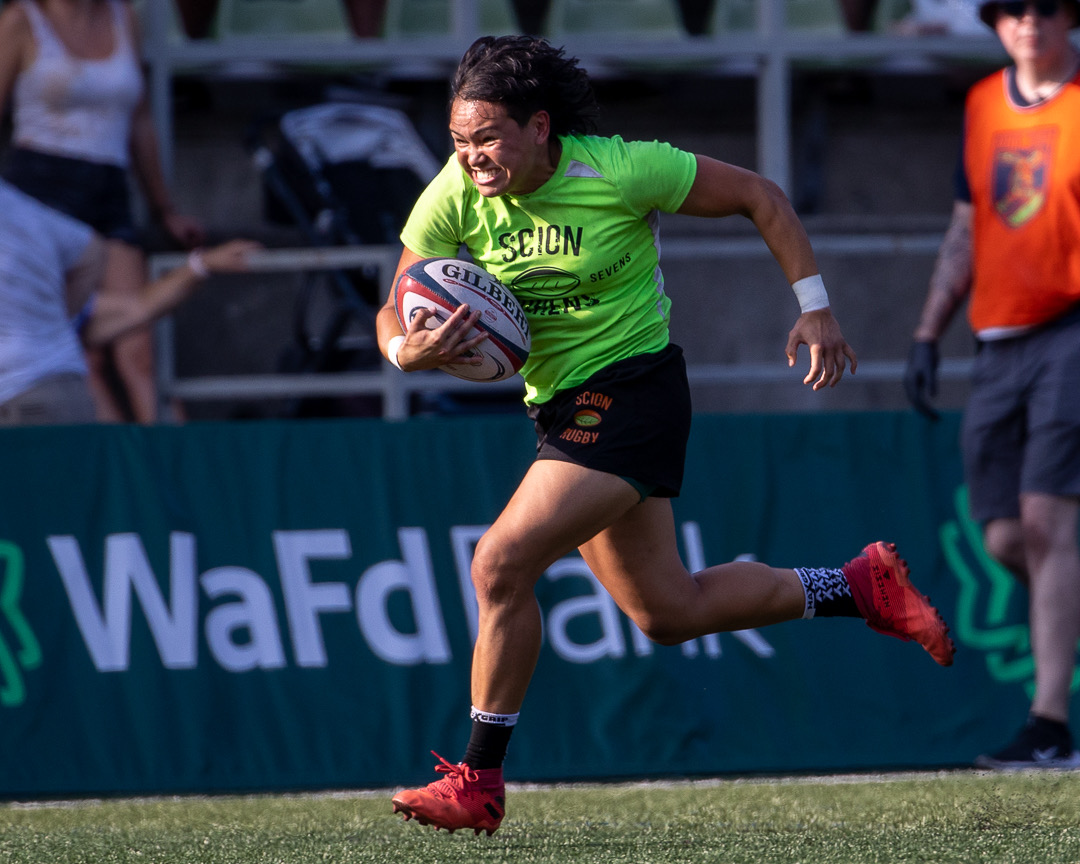 “We had such a breadth and mix [of players],” Rhode reviewed her teammates’ contributions. “We had some of our younger players — Coco Wallace, Jess Lu, Bridget [Kahele] — coming up and playing through. Some of our vets who have been with Scion for a number of years. But actually from Scion’s last national championship it was just [two players, Kimber Rozier and Emily Fulbrook] who [were] on the team and the rest of the squad was new. So just a great mix and great way to finish it off.

“It was a special honor for us to have three Princeton players who played for Emil [Signes] during our college careers on the ‘Signes Cup’ winning Scion side,” Rhode (’12) noted Lu (’18) and Wallace (’21) as well. “Grateful for everything Emil taught us and all that he has done for rugby — and women’s rugby — over the decades!”

In other results, ARPTC beat Washington AC 15-7 for third place, Rocky Mountain defeated ORSU 39-7 for the Plate, and the Boston Belles topped Chicago North Shore 12-10 for the Bowl.