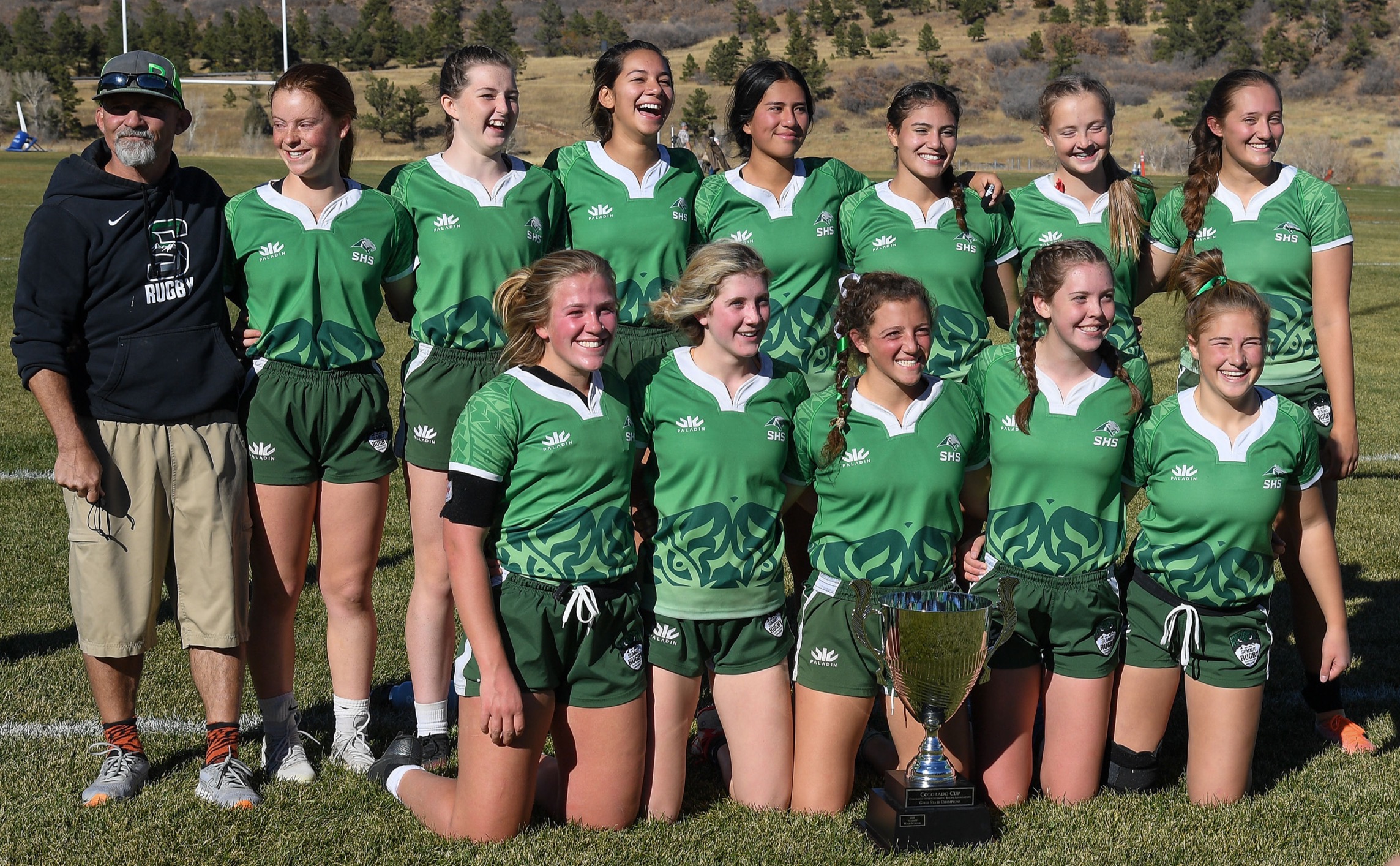 Senior captain Olyvia Snyder started playing rugby sophomore year and was fast-tracked to the varsity side (“Green”). Snyder plays soccer, runs tracks and skis competitively year-round. She’s the two-time reigning state champion in the slalom and competed at U.S. nationals in April. To say the least, she’s a fantastic presence on the pitch. 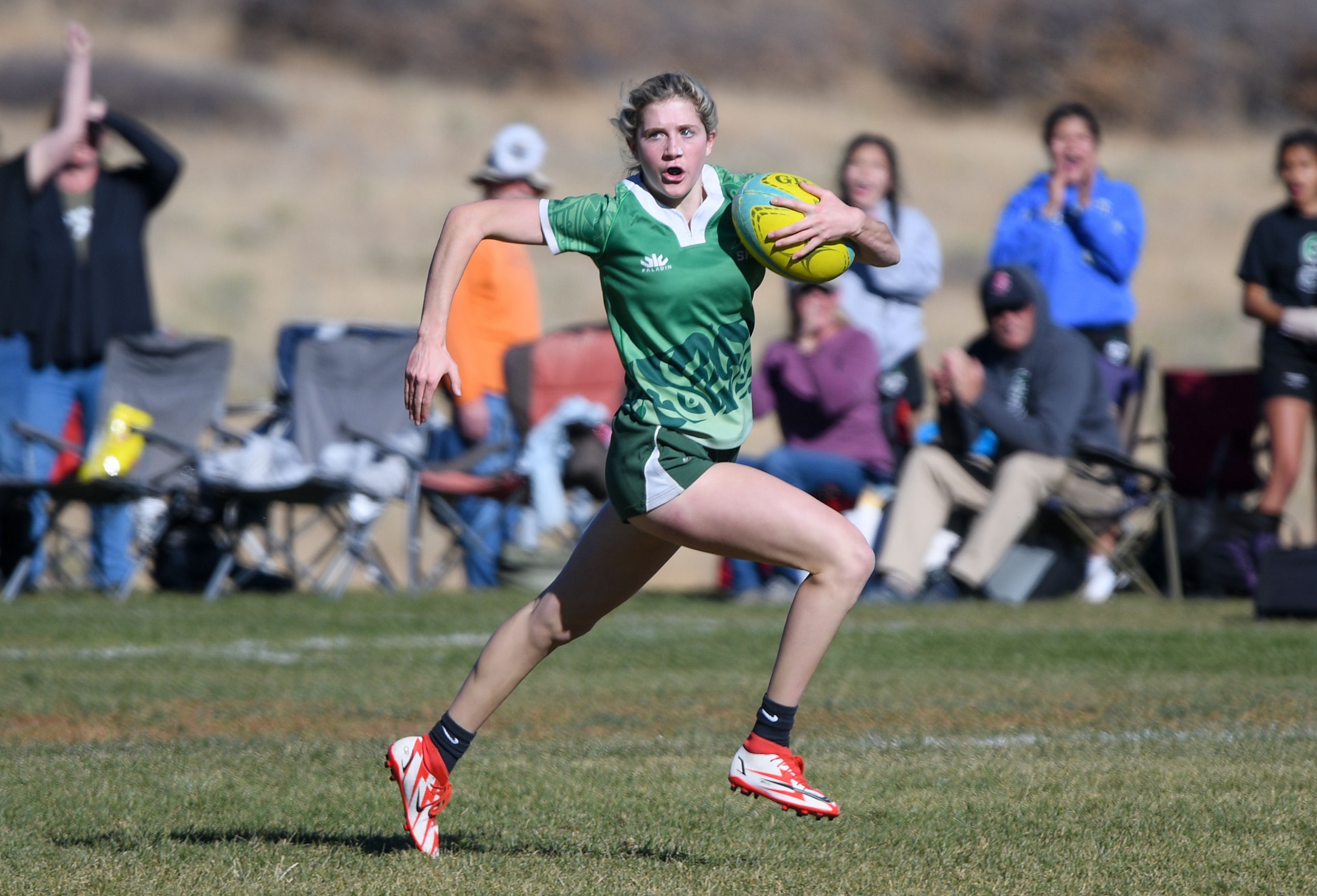 “I started on the highest-level team with a lot of experienced players,” Synder reflected on fall 2019. “I didn’t have a big role on the team but I was able to learn from some of the best Summit rugby players in my first year. I’ve stayed on that team ever since and it’s been great.”

Snyder called out PK Vincze as an early role model, and leaned on the current Harvard University freshman’s memory when she stepped into the captain role as a senior.

“I really liked how PK led. You could make mistakes and she wasn’t hard on you. She was there to help you and the team,” Snyder said. “Personally, I don’t do well with leadership that is just telling you what to do and expects you to know what you’re doing at all times, and if you don’t, there are big consequences. I like leaders who value flexibility and creativity and individuality, because everyone is different, and the best leaders use all of those strengths.” 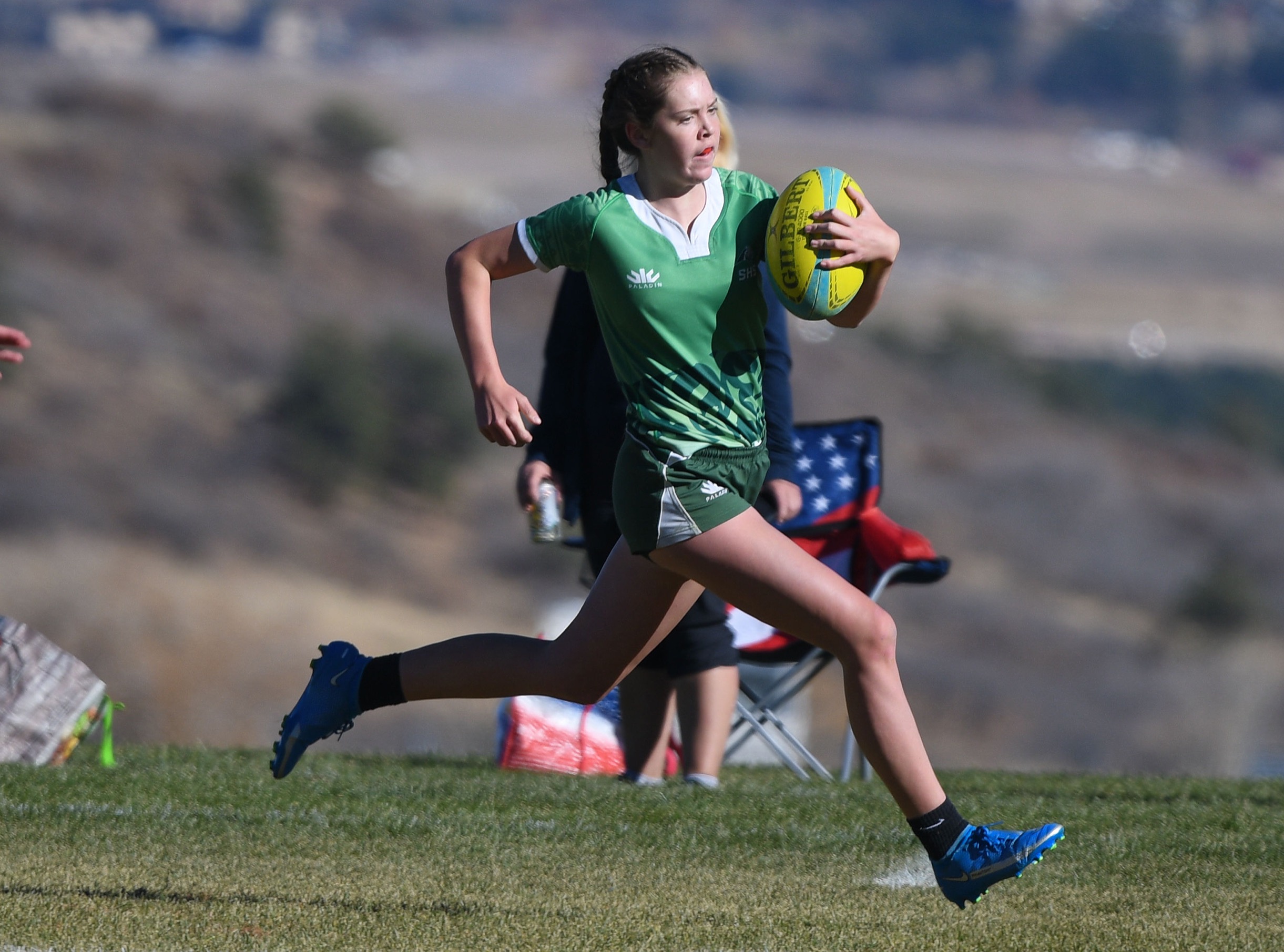 Last year, the CIRA championship season pushed from fall 2020 to spring 2021, and Summit won that title. When the team returned to campus this school year, 60 players came out – and stayed – with the rugby team.

“It’s just a great culture, and everyone’s who in it knows they have support from everyone,” Synder thought on the player retention. “Plus, people weren’t doing anything for a year during Covid and so they were more motivated to come out and less likely to drop out of sports and school. People wanted to show up because the other option was home, and they did that for a year already.” 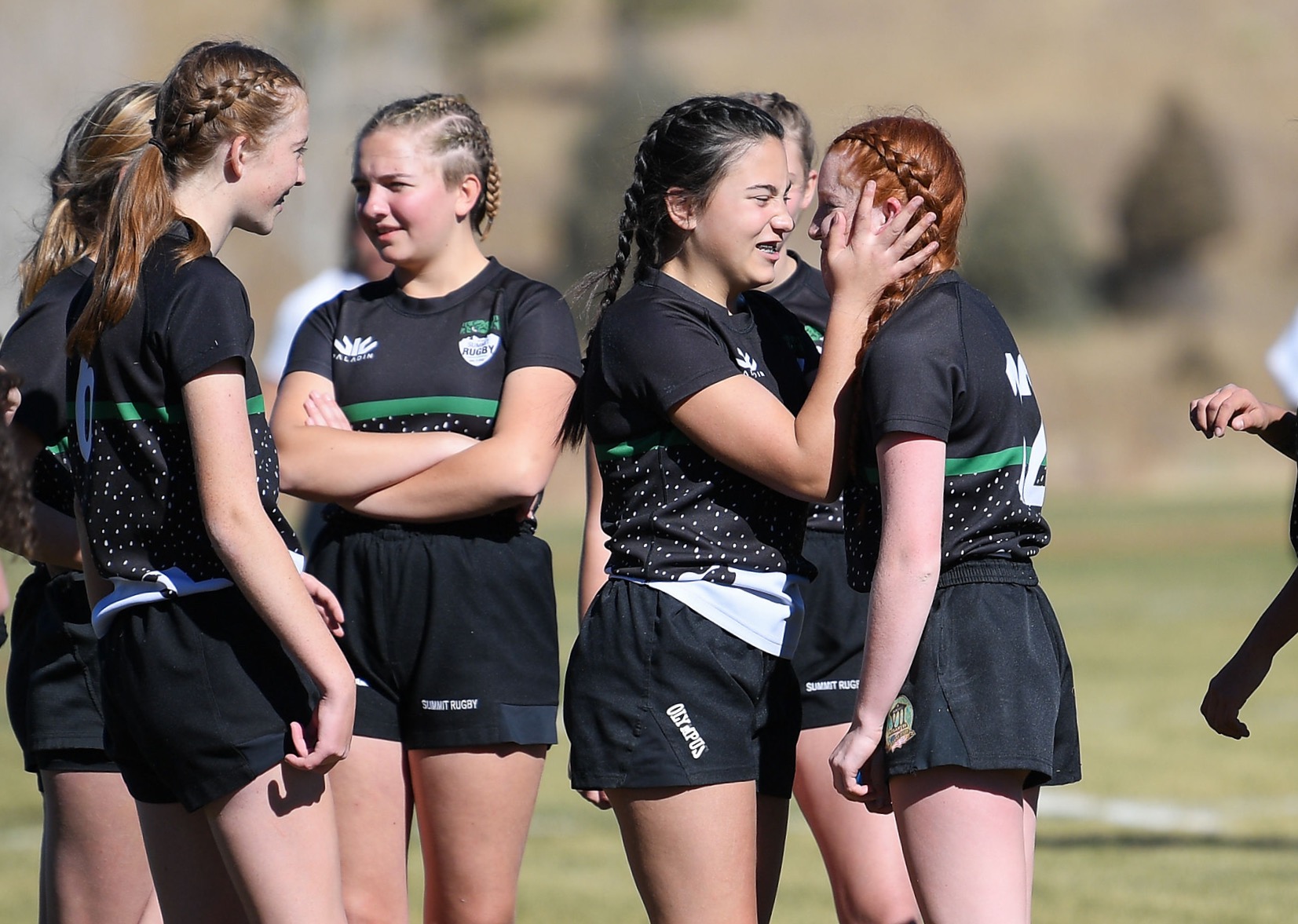 Summit has three coaches managing the teams, and while the early season was difficult in keeping everyone focused and productive, the separate squads soon found their rhythms. On game day, teams went to different tournaments; however, the Pink 7s, allowed all 60 players to bus over to Salt Lake City for the annual October tournament. Summit and in particular Utah’s United have been trading home-and-away fixtures for years now.

“It’s definitely more of a relationship than a rivalry,” Snyder said. “They came to our Summit 7s tournament [in September] and we beat them in the final. They didn’t have their full-strength squad though. It’s always fun to play them because they bring such a high level of rugby and we have to raise our level to meet them, and that’s always a challenge. They’re different than all the teams in Colorado. We didn’t play United [at Pink 7s] because we lost by a conversion in the semifinals [to the Majestics], so that was super disappointing.” 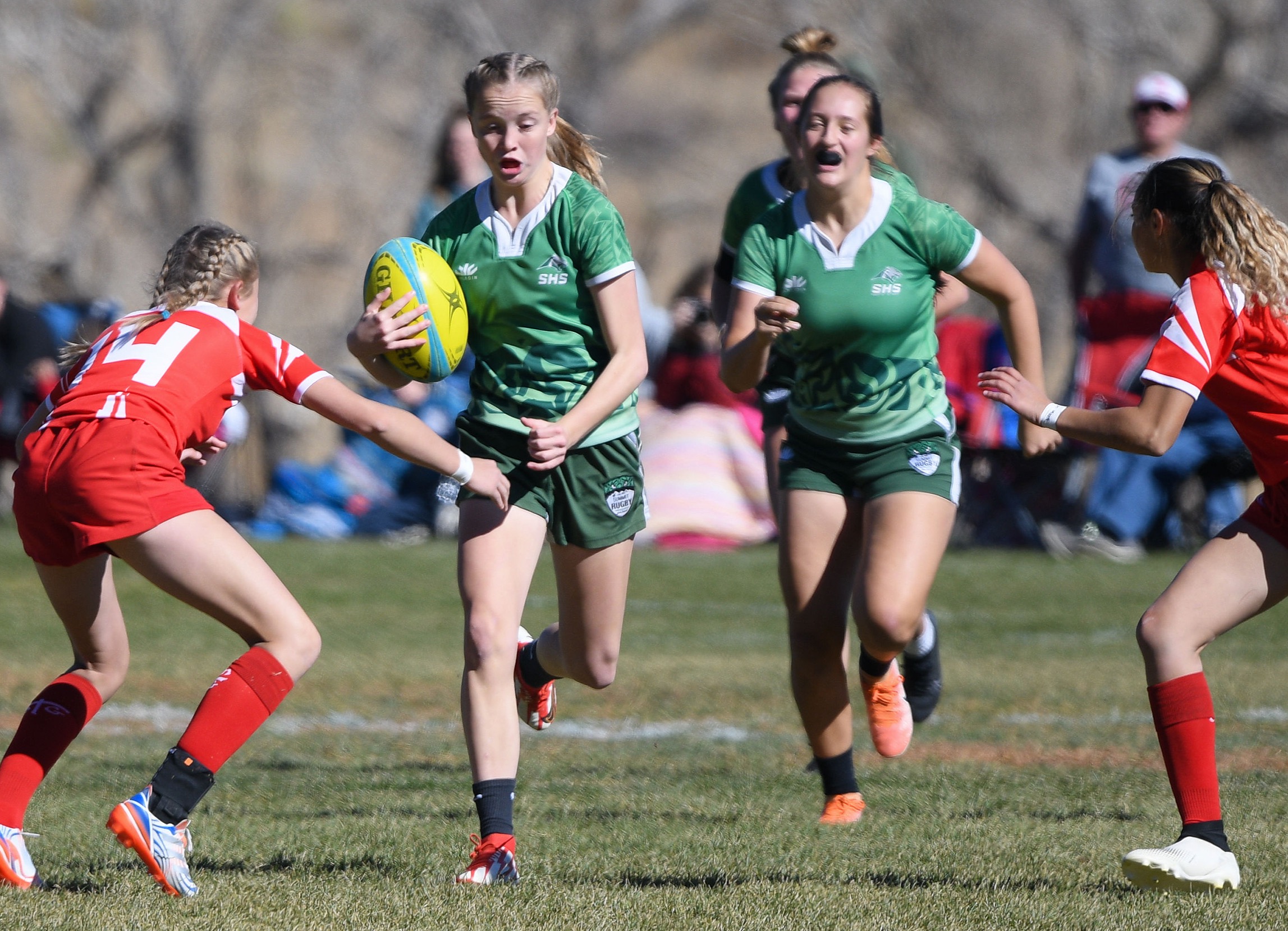 But that early-season outing at Summit 7s and the competition against United were very valuable to the trajectory of the season.

“It was a confidence booster because we came out with a win,” Snyder said. “Normally, or at least year, the Green team had been playing with each other a lot over the years. We moved up together. This team had people from all over. Some went straight from JV to Green. It was a mix of people who hadn’t played together, so it was a big confidence boost to see that team chemistry and that level of play.”

There is a quality core of seniors who drive the Green team, and Jenna Sheldon is chief among them. She’s played all four years, is a national-level ski racer like Snyder, and is the mark of intensity on game day and at the training pitch. Senior Elizabeth Darst is a student of the game and per Snyder likes to analyze all the different ways to run a defense, penalties, plays, and so forth. Aside from her on-field contributions, senior Milly Carleton brings the fun side of rugby to life and makes sure everyone is having a good time. 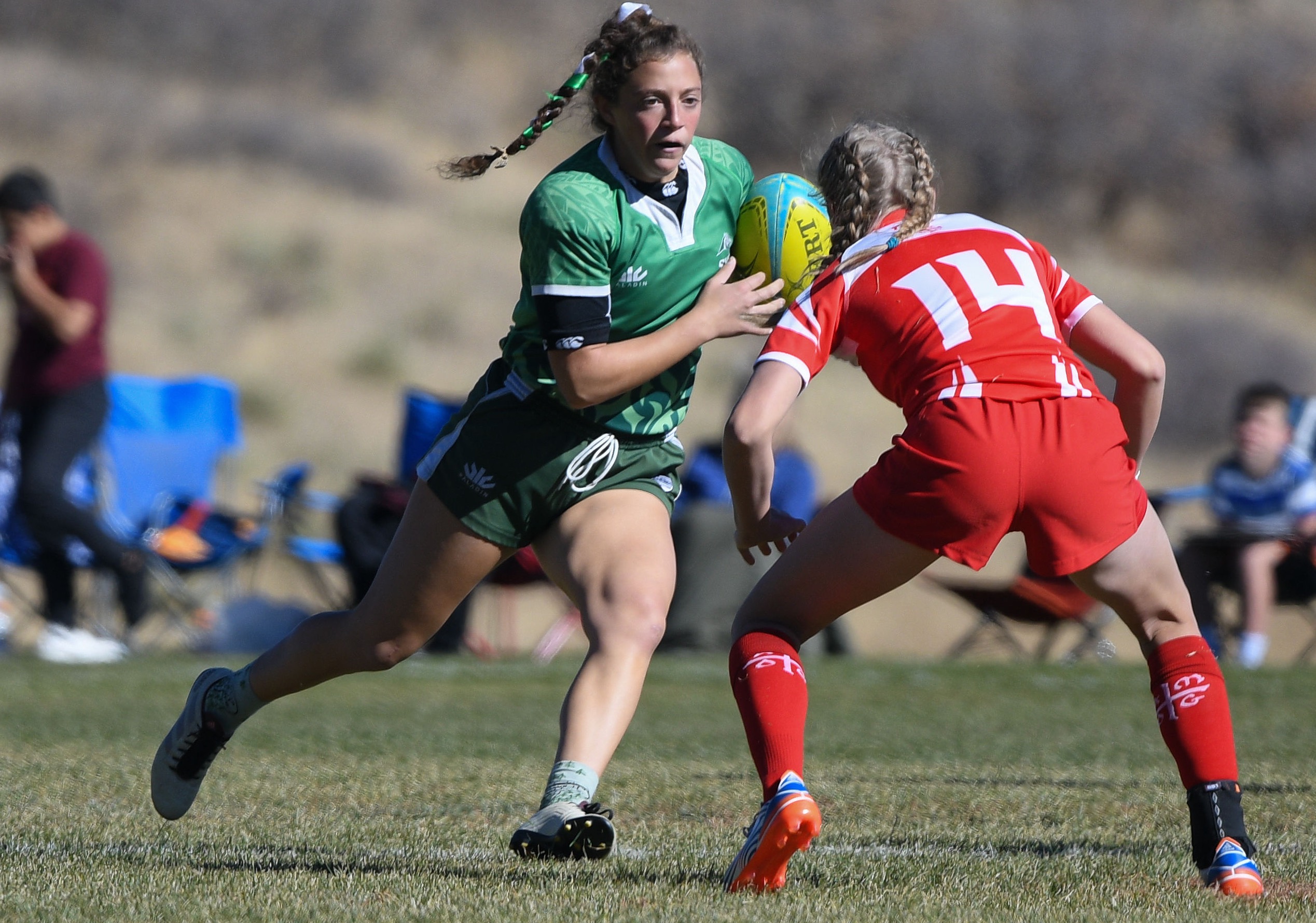 Isabella Comai was influential during the fall but regrettably was injured for the state final with a dislocated kneecap.

“[Head coach Karl] Barth put her in the for the last minute of the game. ‘As a senior, your one rule is to not tackle anyone,’” Snyder recapped. “The wing ran at her with space, and we’re all on the sideline screaming at her, ‘Do not tackle her!’ But with all the grit and determination that every Summit player has, she didn’t back down and held onto that jersey until help arrived.”

But with all of that senior leadership, there was still the question of who would fill the halfback vacancies left by spring 2021 grads Bryton Ferrari and Brielle Quigley. Juniors Paola Arredondo and Joselin Roque stepped up. 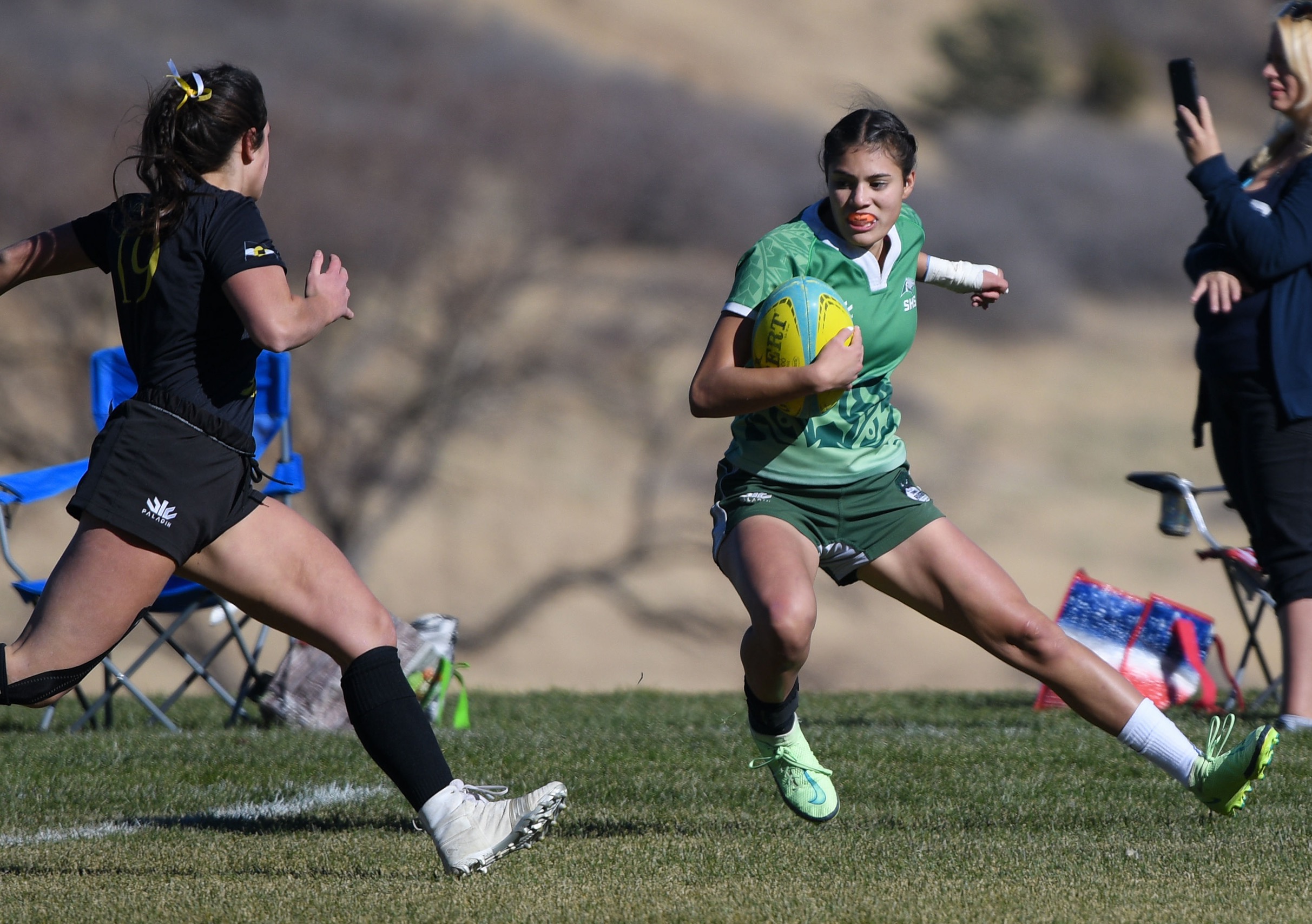 “Paola is our scrumhalf and sweeper, and she is fearless and relentless and never gives up,” Snyder said. “Joselin has been a great addition to our back line, and I know they’ll help the team next year to continue to improve.”

During the season, Denver East and Monarch provided the best competition and they were often trading decisions throughout the fall. But Snyder confessed that the team finds its biggest push from its own players.

“It’s actually a cool head space to be in,” the captain said of relying on internal competition. “It makes it more of a team and family, because we are required to hold each other accountable. Wi
thout that, we wouldn’t be where we want to be, and we all know where we want to be. We’re all motivated to get there at the end of the season, and that provides more connection between the team.” 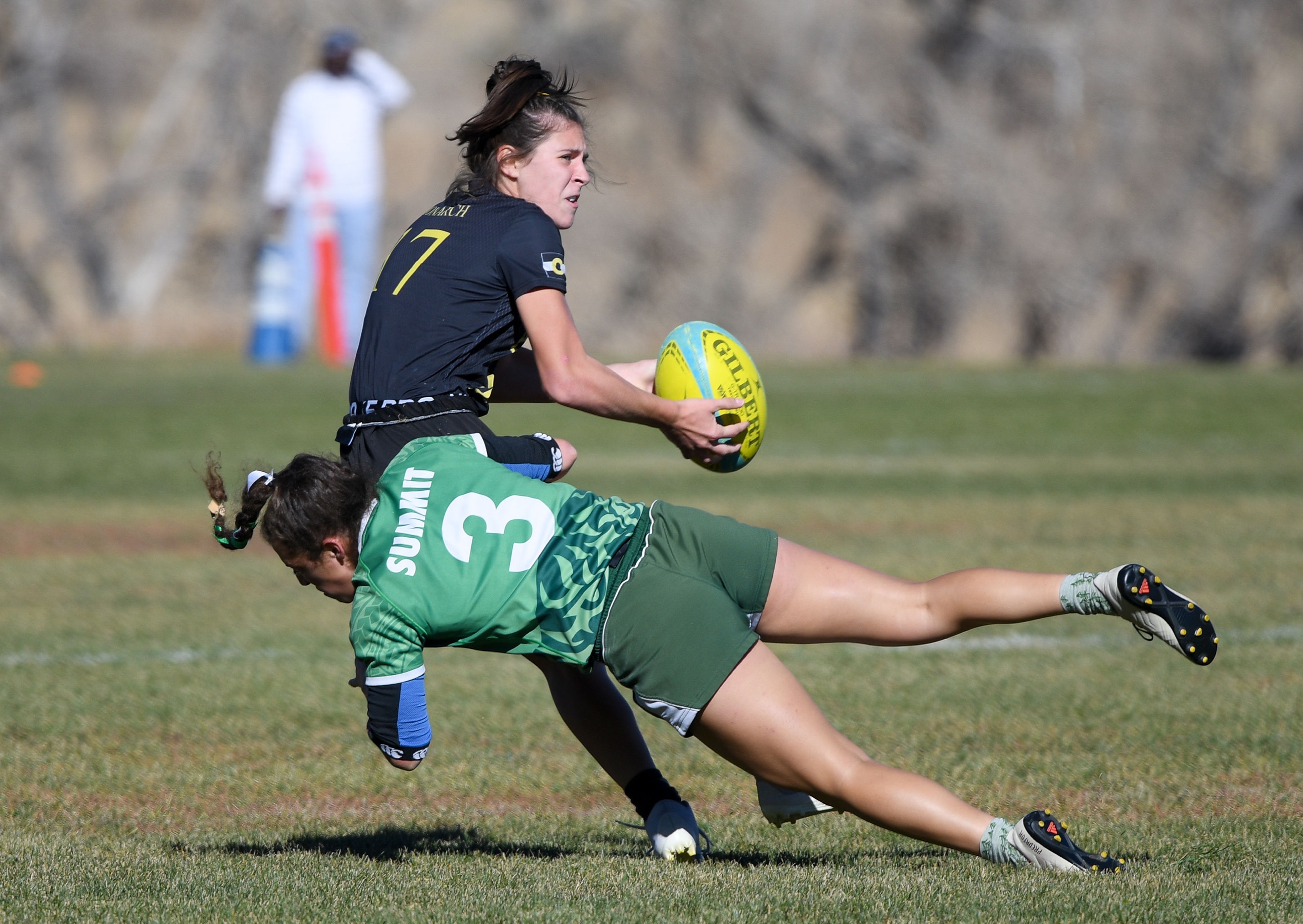 Summit Green took the #1 seed into states but there were some nerves ahead of the semifinal, as the Tigers hadn’t played in two weeks.

“Our first game was against Regis, and it wasn’t our best game. It wasn’t bad we just knew we had to build on it,” Snyder said of the 47-5 win. “And then when we were warming up for the final, usually we’re super talkative, but we were dead silent. Everyone was honed in for the championship. As a leader, I’m trying to keep the same feeling for all the games, but everyone knew the pressure was on because it was state and we got the one game only.”

Monarch had edged Denver East 19-17 in their semifinal to advance to the title match. 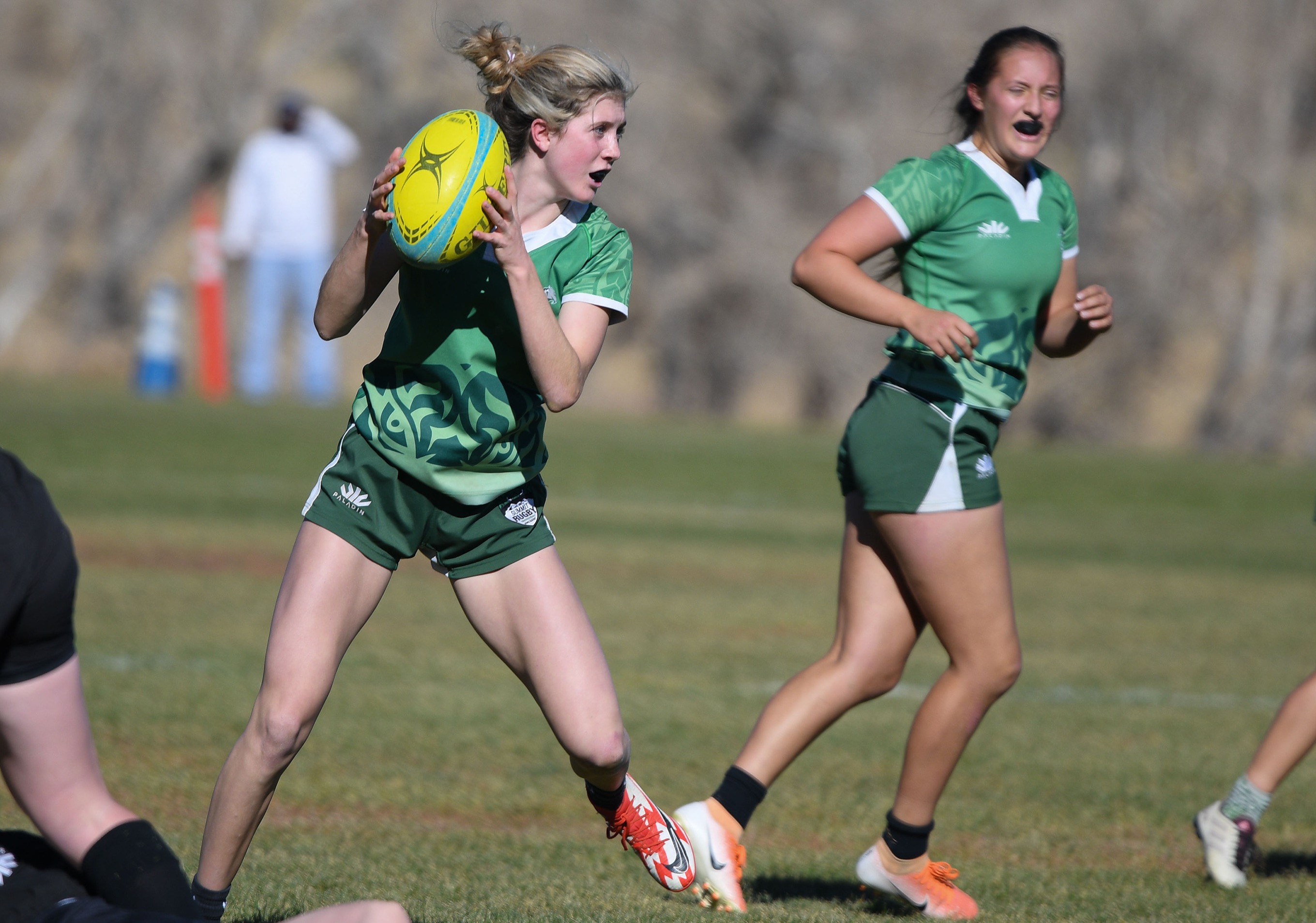 “The final was a physical tussle from the opening whistle with players from both teams finding themselves on the wrong end of a big tackle or fend, but the pressure of Summit’s defense forced key turnovers that they quickly counter-attacked into points en route to building a 19-0 halftime lead,” Summit head coach Karl Barth wrote. “Monarch never backed down and despite surrendering two more tries played open and aggressive rugby on both sides of the ball until the final blast.”

Summit’s Sheldon and Monarch’s Kate Muldoon led by example and were work horses who made the big tackles. Arendondo scored three tries, and Snyder and Darst added one try each. Roque went 4-for-5 in conversions in the 33-0 win.

“We rose to the challenge and didn’t succumb to pressure,” Snyder said. “As a team we just knew we trusted each one of us to do our roles, and we did it almost to perfection. The other team barely gained ground because our defense was rushing the other team, and our tackles were really good and our offense just clicked. It was amazing and one of the most fun games I’ve ever played.” 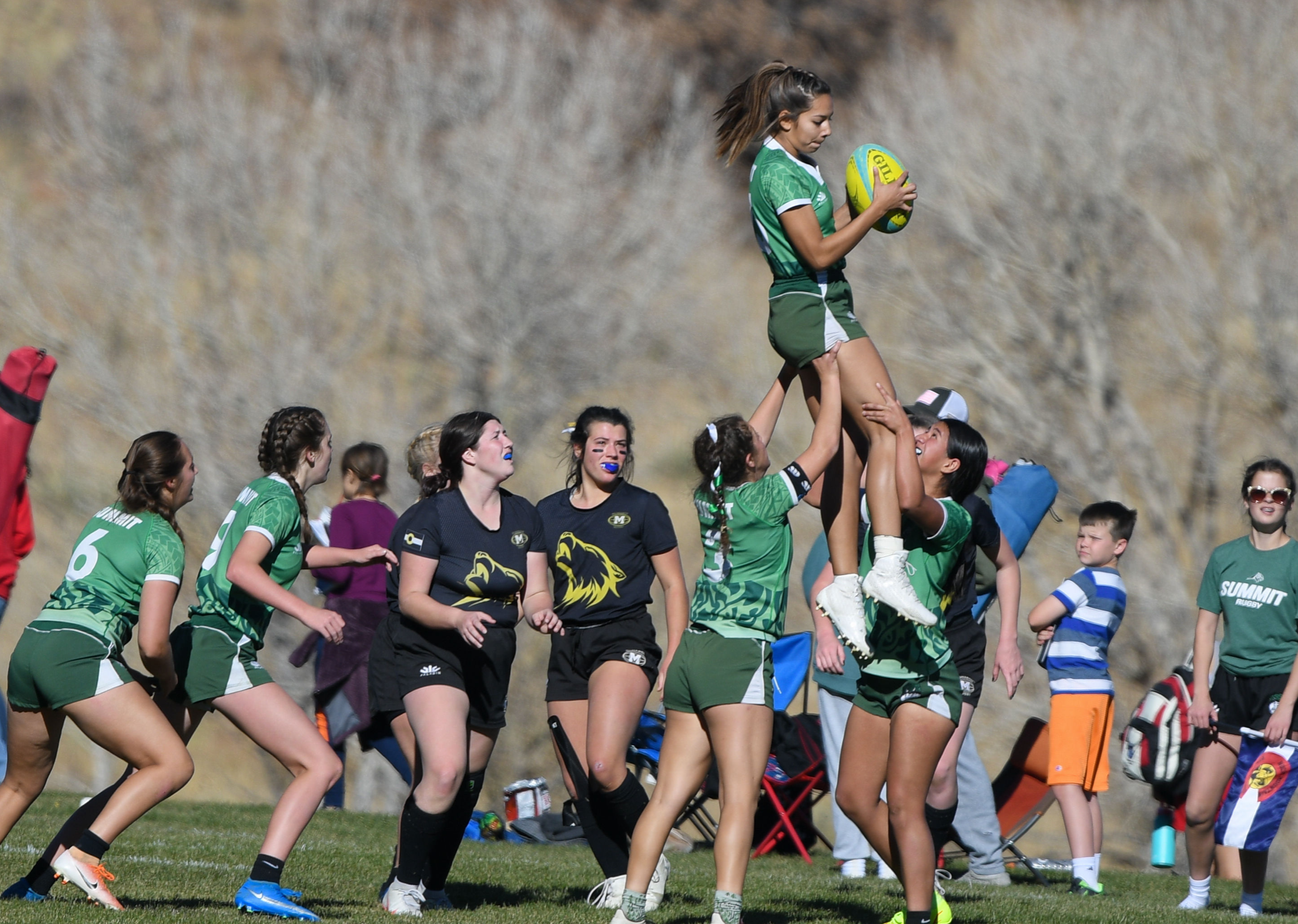 “This one hit different because it’s my class that’s in charge,” Snyder said of this championship’s significance. “It’s the seniors’ role to lead the team, so it felt different when we got that trophy because we helped get our team there. We were the head of the team instead of the past years when we were underclassmen.”

There’s still a little rugby left, as the CIRA all-star game this weekend caps the season. Eight Summit players have been selected. In the spring, Summit is optimistic that it’ll have the numbers for 15s, and there could be a nationals run in the team’s future. 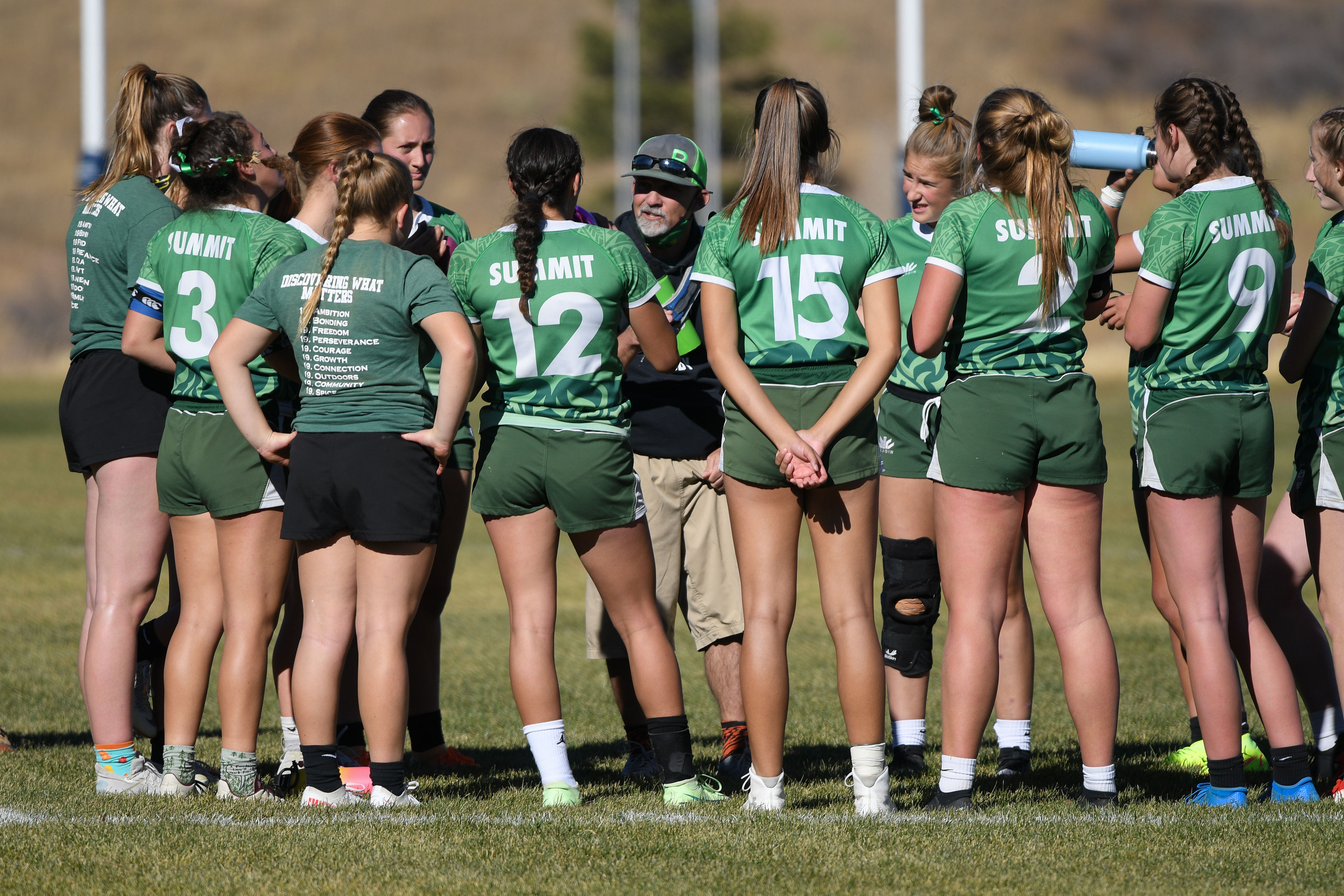