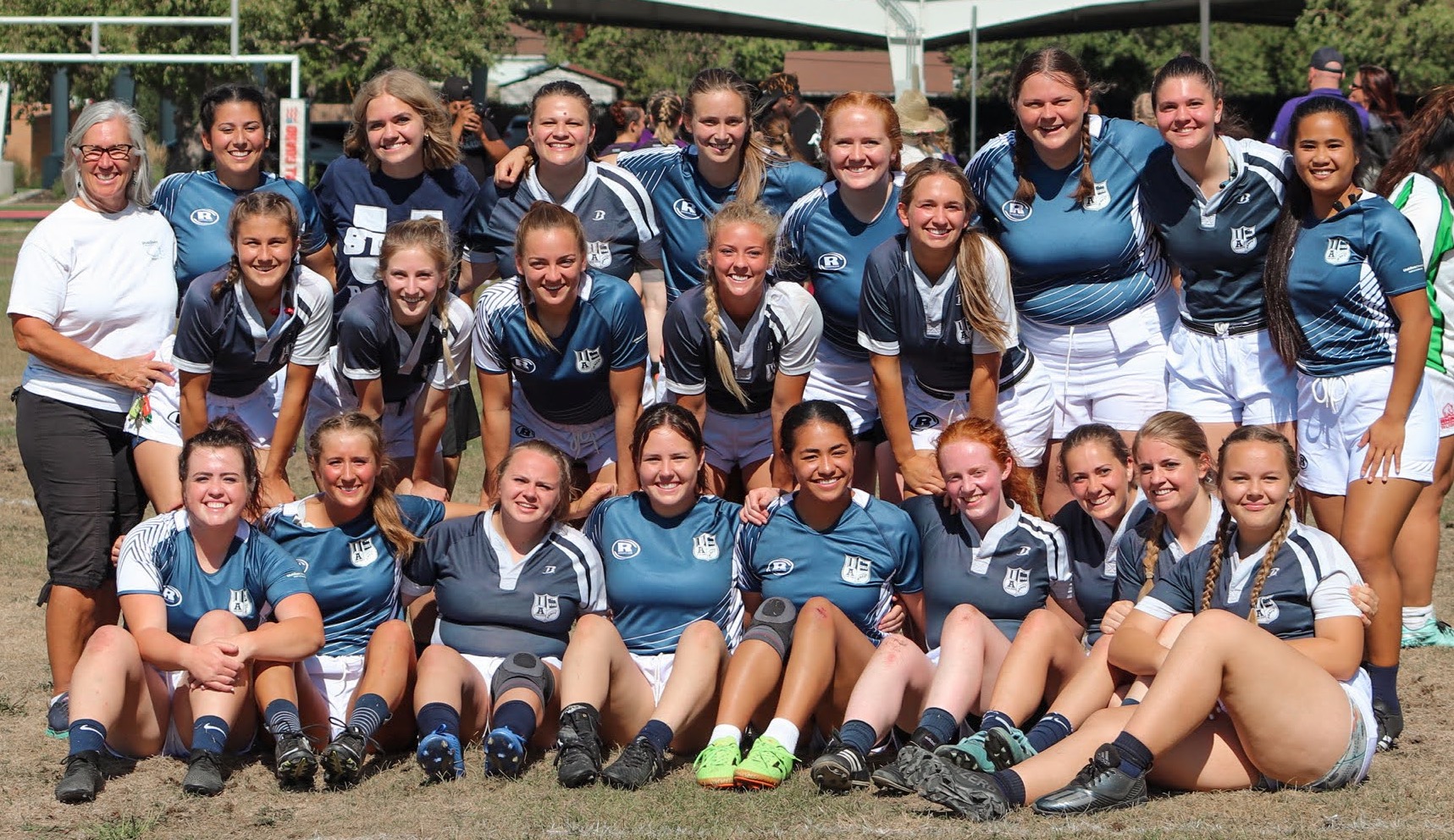 The DI Rocky Mountain conference championship is set, as the top East (Univ. Colorado) and West (Utah State) divisional leaders travel to Grand Junction, Colo., for this weekend’s title match. Both teams will advance to the Collegiate Rugby Association of America (CRAA) DI Fall Championship Round of 8/4 in Norman, Okla., on Nov. 20-21.

Prior to fall 2021, Utah State played its last rugby in February 2020 at the LAI 7s. The team then went on spring break and Covid-19 shut down campuses countrywide. The team reassembled in fall 2020 and was able to hold socially distanced practices, which allowed for heavy skill and fitness training. Head coach Theresa Pitts-Singer also introduced Zoom lectures on Tuesdays and covered heroes of American rugby, nutrition and basic law reviews, but the players were fatigued with virtual learning and preferred the outdoor assemblies. The spring evolved similarly, but limited contact allowed for season-ending 7s tournament against Weber State.

“We kept it fun and it’s a good group of girls,” Pitts-Singer said of player retention. “A lot of them have said they’ve never had friends like this or that they’ve never loved being on a team so much. The ‘love’ word goes around a lot.”

Utah State was able to recruit a bit for the fall and brought in some good talent. Numbers are normal – started with 30 and now have low 20s for game day. 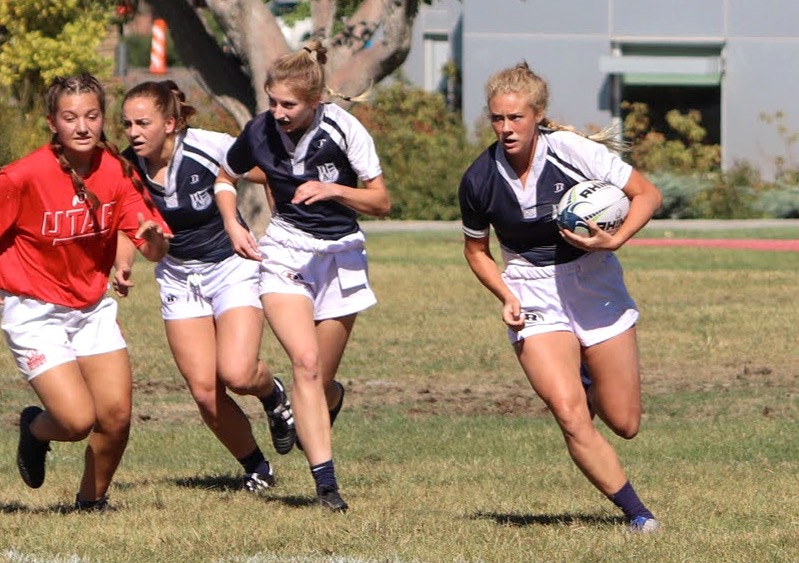 “We’re not heavy with people but the people who have shown up are super committed,” Pitts-Singer said. “The beauty of my team is there are several new people who have played in high school, so I’m not starting with completely naïve material. They already know what they want from this sport. They come with some skills, although sometimes it’s, ‘No, we still need to work on your passing.’”

“Alia is our hooker but flexible enough to play prop,” Pitts-Singer lauded the front row starter. “She’s not tall but she loves to jackal, and she is so aggressive in the breakdown. It’s amazing.”

That drive fit well with the team leaders’ vision for this season. Flyhalf Brynn Dittman and outside center Abigail Hymas are the president and vice president, respectively, as well as very dynamic players.

“Our first meeting, by Zoom, they explained that they wanted to be more serious and had the goal that practice is from 4-6 p.m. and everyone is booted up and ready to warm up at 4,” Pitts-Singer said. “I told them, ‘Good luck, but you need to be the example.’ In the past, leadership has been as slack as the rest of the team in terms of getting started, but they stuck to it. By 4:10 p.m. they’re looking at me like, ‘Hey, coach, what’s next?’”

The team gets two solid hours at training and their progress is amplified by the dedication to the weight room. That said, there wasn’t much talk about winning and post-seasons early on. 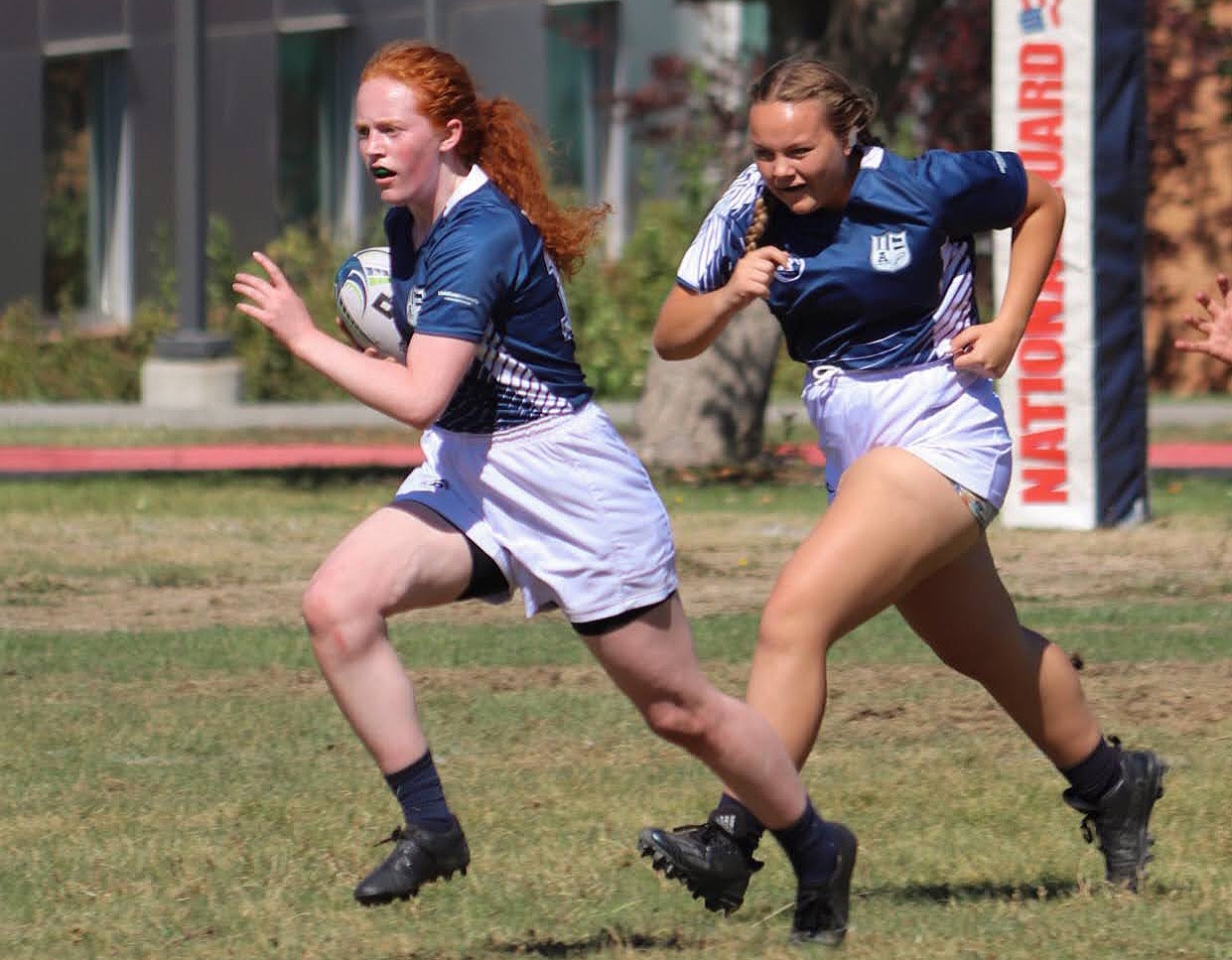 “They’re hungry,” Pitts-Singer surveyed the squad. “They’re coming out of Covid where they were restrained so much, that they showed up really wanting to learn. They ask good questions and listen to each other and just want to be together.”

Pitts-Singer is different, too. Covid-19 slowed things down and the coach took time for self-reflection and listened to coaching podcasts, and built a new relationship with the team.

“The most surprising thing about this team is that the things we do at practice, they do in the games,” Pitts-Singer said. “Maybe I’ve learned how to better explain why we do things a certain way, and I’ve learned to listen to the players better. I’m 40 years older than the players and sometimes you get weird pushback. ‘Why are we doing this?’ Then I wonder whether it’s my values coming through and if I need to chill? But I’m not getting anxious about that stuff anymore and it’s helped me.

“Plus, this past year we’ve had time to work through things together,” the coach continued. “Usually you have two weeks to learn how to scrum, learn how to tackle all before your first game. ‘Who’s good enough to throw? Great, you’re our lineout thrower now.’ But now we had time to ask, ‘What do you actually want to do,’ because there was no pressure before game day. Everyone knew just enough to get by and we’re all on the same plane and can move forward together.”

Utah State plays in the western portion of the Rocky Mountain conference and traditionally faces Montana State and Utah Valley University in home-and-away fixtures. But UVU did not field a team this fall or update the league of its absence. The Aggies played their first league on Sept. 11 against Montana State.

“It was the first time I saw my girls play in one-in-a-half years and my jaw dropped,” Pitts-Singer said. “They looked really good.” 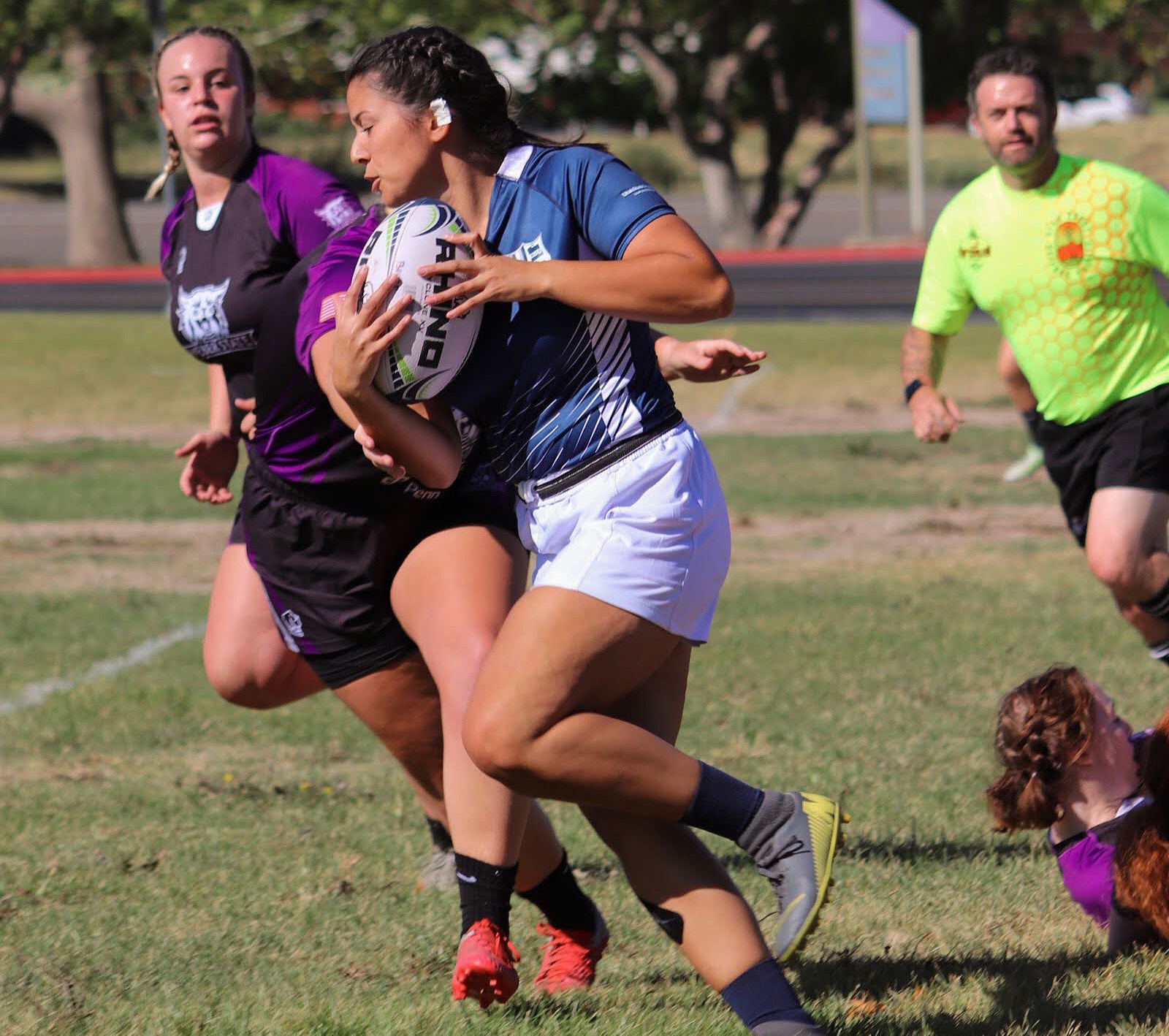 Utah State won 48-7 and filled in the UVU gaps with some 7s against Weber State and University of Utah. On Oct. 2, the Aggies won the Bobcats rematch 65-10. The squad was also able to play DII Colorado Mesa University twice, winning by a combined 124-17.

Dittman and Hymas led the way on the pitch.

“Brynn understands rugby and sees the game,” Pitts-Singer said. “Her younger sister, Kate, is the scrumhalf and so we have a great connection there because she looks up to her sister and will follow her lead.”

“Abbey is this amazing athlete,” the coach continued. “She comes from high-level soccer and brings that skill set to rugby. She runs hard and breaks tackles, because I think she understands her body so well. When someone starts to ease out of the tackle, she breaks free, and if she gets caught, she just kicks to herself. And she’s worked on that all by herself, staying after practice to work on her kicking and conversions. Knowing she’s like that, it lifts the other players. She has that no-slackers mentality, and the players follow.”

Hymas is the high scorer with 127 points on 19 tries and 16 conversions – and that’s over the four games that Pitts-Singer tracked stats.

“She has another gear and then a higher gear,” the coach said of Hymas’ evasion skills and pace. “She’s not selfish with the ball when she breaks away. This is the fittest team I’ve ever coached, so when Abb
ey breaks away, the support is there.”

Utah State finished first in the Rocky Mountain West, and since Colorado beat Air Force 37-5 in the regular season, the Buffaloes took the top seed in the East. The Aggies hosted Air Force in the league semifinals on Oct. 30. 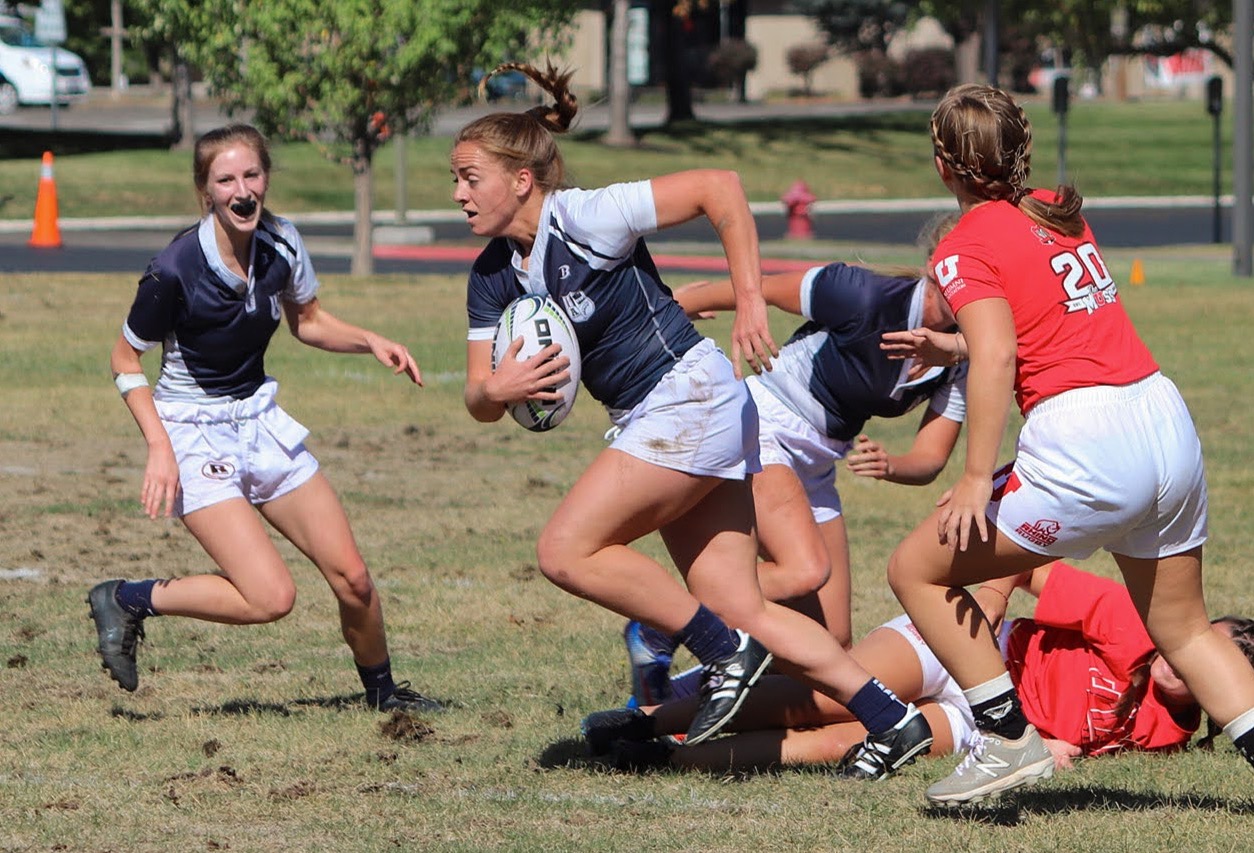 “We hadn’t seen anyone from the East except Mesa State, and they’re a DII team,” Pitts-Singer said. “I thought they were pretty good, so did that mean the DI teams were out of this world?”

Three players had experience in a competitive season with Utah State, and they chose not to give the rest of the team any context or insight into Air Force’s previous successes. The goal was to remain calm and confident in its own game.

“I was still expecting Air Force to come with a strong, fit team that would knock us on our butts,” Pitts-Singer said. “But we matched it, and we drove their scrum back! I was holding back tears the second time we scored and after the way we dominated the first part of the first half. I was welling up and had a big group hug with the subs on the sideline, because this was big.”

“The team’s support was incredible,” Pitts-Singer said. “When someone broke away, somebody was on top of the breakdown immediately. In the past, that hasn’t happened because people, notably the forwards, weren’t fit enough so the backs were doing the job of two. Since we have fit forwards, we’ve been working on a 1-3-3-1 set-up, and we’ll have a flanker or 8 on the wing that can take advantage of an overload in the back line. They’re fit, fast, and they play bigger than their bodies.”

Hymas scored four tries in the third quarter and converted all four. Layne had scored again, and the scoreboard sat at 68-12 until the 70th minute, when USU incurred a yellow card. In the final stretch, Air Force ran in three converted tries from Isabella Mullally (2) and Sarah Scrapchansky, with Layne hitting the extras, 68-33 the final. 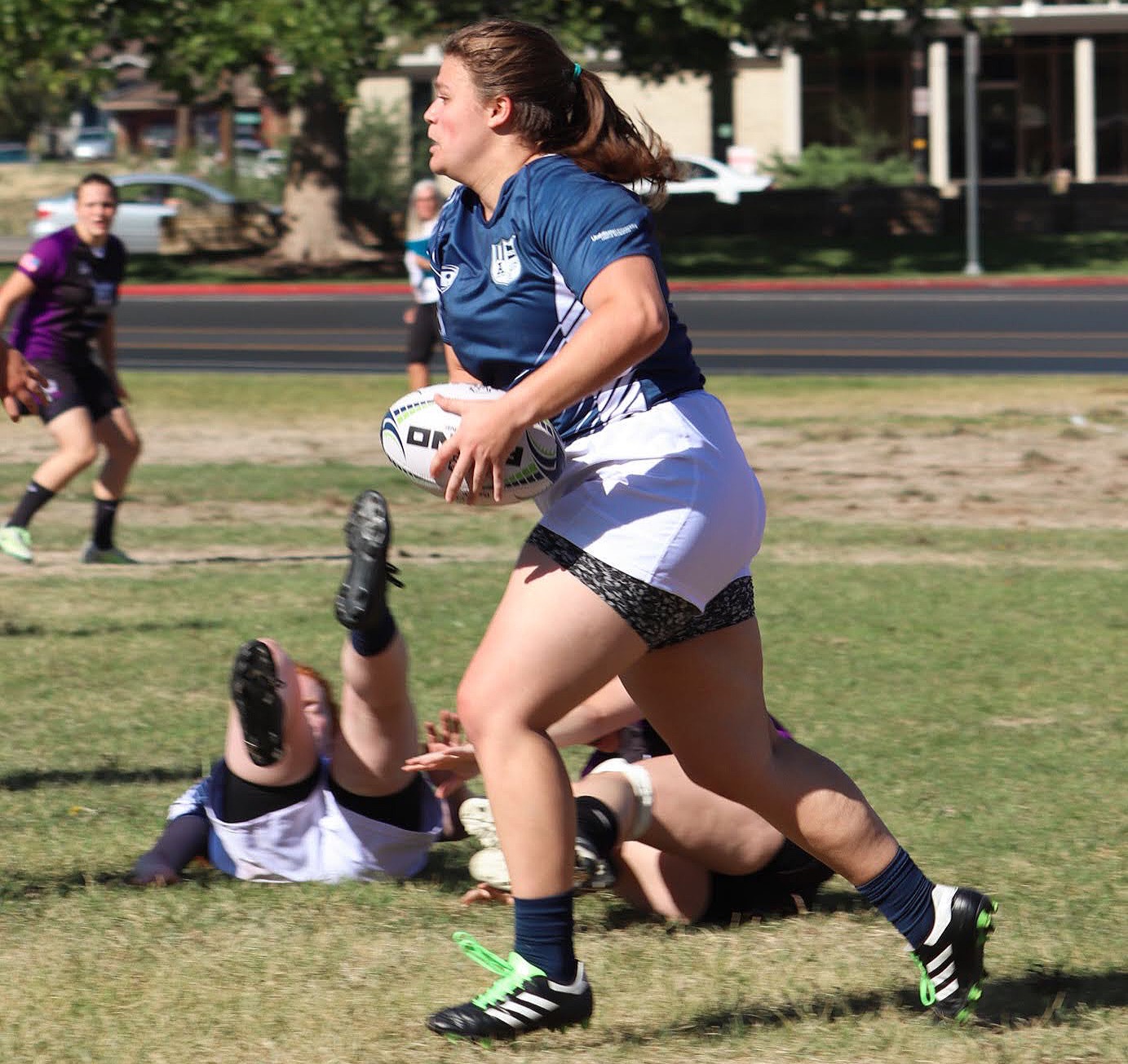 No. 8 Maddison Strubhar showed well. She joined the team in the spring and had that skill-heavy run-up to her first league season. She stood out and did damage with her picks off the scrum and powerful carries. Wing Bruneel also drew praise and plays with the poise of someone who has been playing longer than just one season. She completes a very fast back line that includes Hymas, Billings at fullback and also Dana Paskett, who doesn’t always start because she sometimes flanks.

“A lot of the feedback was positive,” Pitts-Singer reviewed the Air Force match. “We broke out and made a defensive wall that I had never seen and it was consistent. The support at the breakdown was amazing. The number of completed tackles – we don’t keep stats on that, but it was obvious that we did well there. There were few breakthroughs that our fullback had to clean up.

“But we had to work on some things,” the coach continued. “We weren’t strong to defend our breakdown and were pushed off the ball sometimes. I don’t think they were used to that contact. And our offloads, we have to get better with that, knowing when to do that or take more steps in the tackle.” 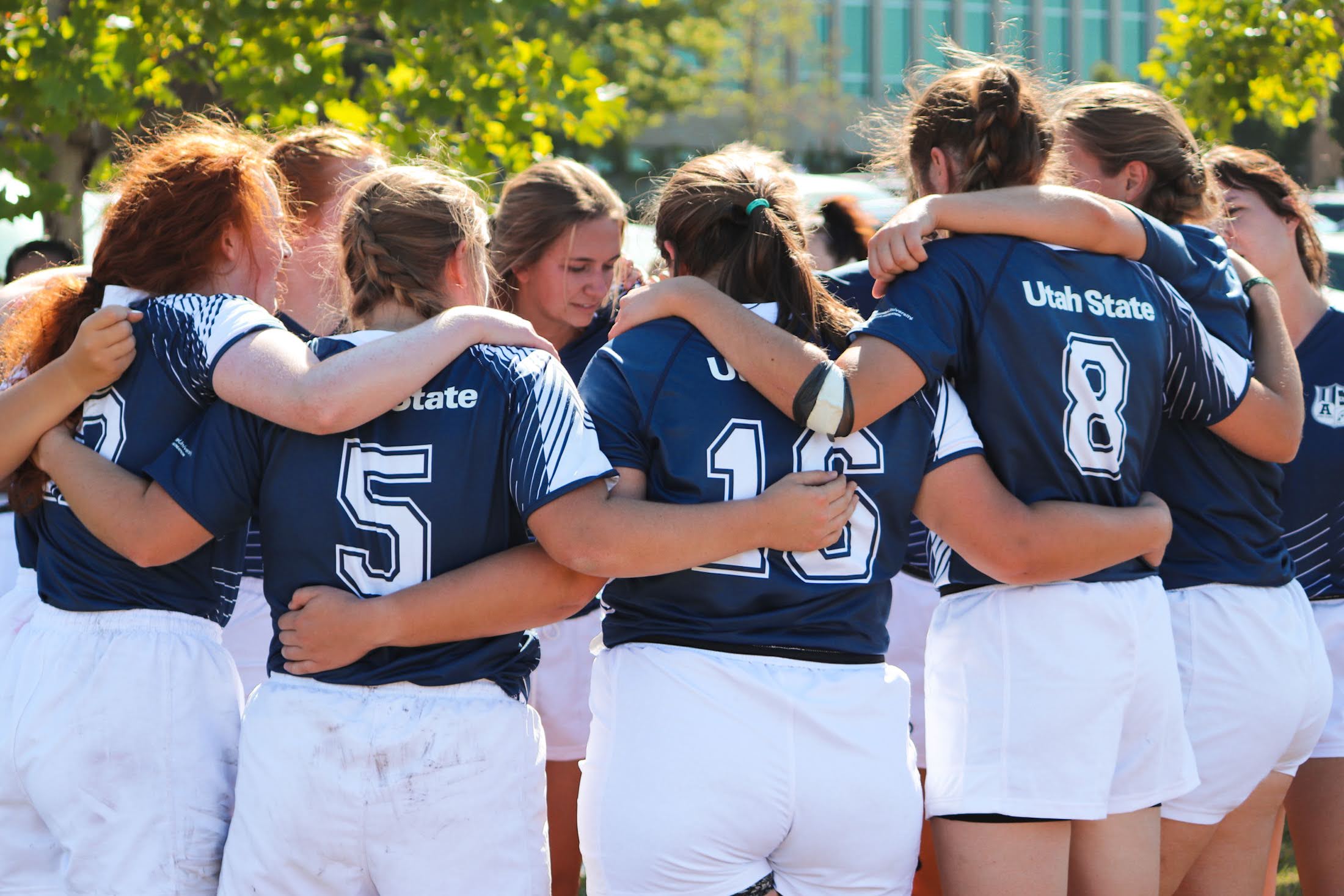 “It’s such a mystery, because we just don’t know each other, no one has played each other, and everyone has a brand-new team,” Pitts-Singer said of expectations for the conference final. “The team asked, ‘Are we that good or are other teams that bad?’ I told them I think they’re good, at least they’re the best team I’ve ever coached. All we can do is play what we know and do it 100%. But this is definitely the game.“

Regardless of the conference final turns out, Utah State and Colorado will be advancing into the regional championship round. This weekend’s outcome determines who will be playing Big 10 champion Davenport University in the quarterfinals or the Big 10 runner-up, which will also be decided this weekend.

The team wants to win but they’re still processing what’s ahead. They only found out yesterday that they were playing in Grand Junction this weekend. But there are other motivators to have a standout season. Former assistant coach Saia Hola found out he had cancer and then very suddenly passed away on Oct. 22. The funeral service was on Oct. 29, and Hola’s daughter used to play for the team, so their family has been top of mind.

“They’re carrying some of that with them,” Pitts-Singer said. “But there is something bigger going on with that and I don’t know what it is to each of them. It’s affected me for sure, to lose someone like that. I couldn’t hide it at the game; they knew I was upset. They’ve shifted toward me. They have been kinder – not that they were ever mean – but maybe they’re more appreciative that I’ve been there for them all this time. To lose someone, it’s deep, and maybe they hadn’t experienced that yet.”