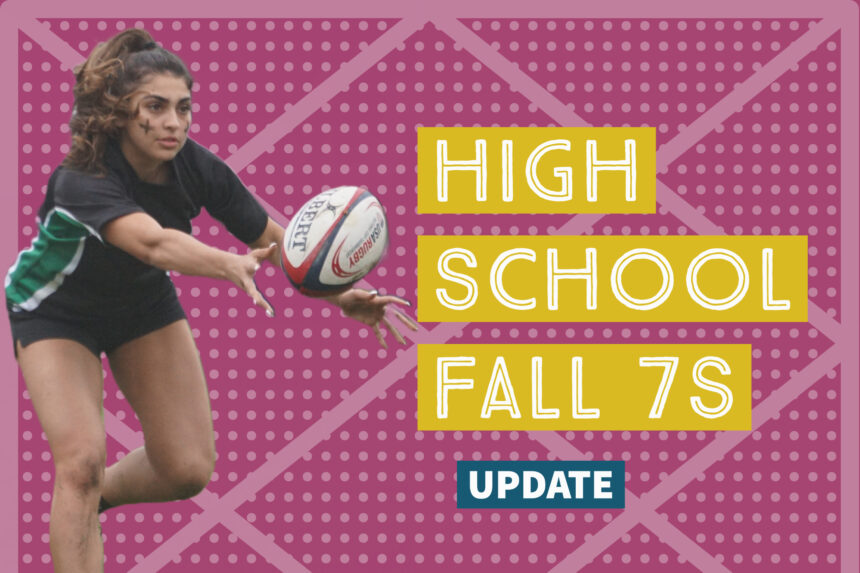 There is a lot of high school rugby happening in the fall, and the majority of it is 7s (check out the states that are playing 15s this fall). Within the 7s sector, there are essentially three brands of rugby happening. There’s the school district-supported leagues, where teams are treated like varsity sports within their high schools and state champions are named. And there are more club-based competitions taking place. The latter still ranges from more structured series with standings points and proper championships, to more easy-going, participation-focused blocks with (or without) a season-ending tournament. This piece covers the high school 7s competition that have single-school and school district support.

The Colorado Interscholastic Rugby Association (CIRA) hosts a fall 7s season for varsity and JV programs. The season began Sept. 1 and will culminate Nov. 5, when the field heads to the Air Force Academy for the state championship. The following Saturday, Nov. 12, CIRA regroups for the state all-star match at Monarch High School.

Summit is the juggernaut, and head coach Karl Barth indicated that he has the largest roster in years, starting the fall with more than 90 players. The top side, Summit Gold, is the favorite with notable returners like Paola Arrendo and Jocelyn Roque featuring heavily in Summit Daily articles. The team did suffer a loss to Denver East, 34-7, during homecoming week, when a different set of seniors took the pitch, but good on East for taking opportunities wherever they lie. Eagle Valley, Monarch, Palmer and Regis Jesuit are also battling it out on the pitch.

There are also tournaments peppered throughout the schedule, and that’s where crossover with Rugby Colorado clubs occur. Events at Summit, Regis and Univ. Northern Colorado see teams like Viper Rugby, Fort Collins, Lumberjackies, Brighton and more mix up the competition. The top non-CIRA tournament, however, occurs Oct. 14-15 in Salt Lake City: Pink 7s. Colorado teams, but namely Summit, face mostly Utah squads in a fantastic clash, and there’s a ton of prestige attached to the event and its champion.

the West Ada and Boise school districts support a varsity and JV 7s season for the girls, and then Rugby Idaho takes over for club 15s in the spring. West Ada is more robust in terms of strength and numbers, and reigning 7s and 15s champion Eagle High School is the team to beat.  The Mustangs are undefeated, but it’s 7s, and teams have gotten close. Owyhee tied Eagle 12-12, Rocky Mountain came within a conversion (14-12 loss), and Mountain West within a try (17-12). Oct. 1 was the final regular-season round and now the field moves into district playoffs. States follow the district championships. Click here for JV results.

There are 11 teams competing in the Iowa Youth Rugby Association 7s season, which is the championship season for high school girls. Sept. 26 marked the first of five regular-season rounds, and four teams went 2-0 at two different locations (note that all the games in the first grouping are shutouts):

In Week 2, Cedar Falls snapped two of those undefeated streaks. The team, which also fields two JV teams that are also undefeated, shut out Central Springs 30-0 and eked past Southeast Polk 12-10.

After losing its week 1 games, CR Washington rebounded with two wins yesterday: 20-14 vs. DM Roosevelt and 32-10 vs. Fort Dodge. (Full results have yet to post).

Standings will inform the post-season seeds, and the state championship tournament is Saturday, Oct. 30 at Southeast Polk.

The Rugby NorCal fall 7s season falls somewhere in between the seriousness of the aforementioned and the more social series seen in club circuits in other states. Some of the teams involved are varsity-like programs at their schools – Carondelet, Bishop O’Dowd – while others are very young and still creating relationships with their schools – though their squads are limited to students of a specific high school. But the intent is there. The organization wants to get rugby into the high schools themselves, and this fall 7s competition helps with that. Come springtime, athletes can return to their club teams for 15s.

Every weekend during October (except Oct. 15, when the EIRA Player I.D. Clinic occurs in Dublin, Calif.), there is a tournament at Carondelet HS in Walnut Creek or St. Mary’s in Stockton. On Oct. 29, Overfelt HS in San Jose replaces St. Mary’s as host.

Teams are playing three or so games at these October tournaments, and standings are being maintained. But weekly champions are not being named, per se. The post-season begins on Nov. 5, when the field reports to Sacramento for a seeding tournament. Those results will be used to populate the championship bracket, which will play out on Nov. 12 at the University of the Pacific in Stockton. Carondelet is the reigning fall 7s champion.