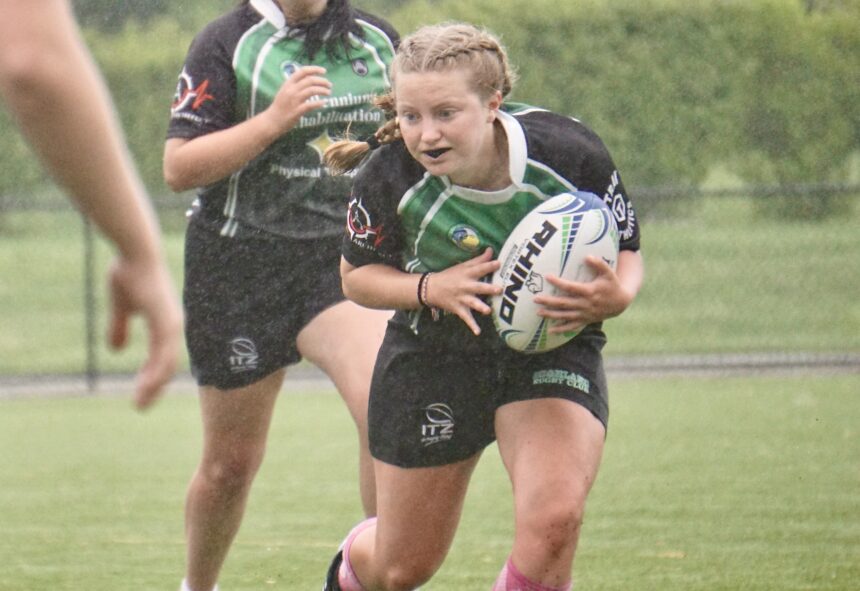 During the fall, girls’ high schools are playing state 15s (read more) and state 7s (read more). But arguably the largest portion of teenagers are playing in 7s series that are more club-based, though they often culminate with a championship tournament. This recap looks at the latter group.

Rugby Indiana does a four-week fall 7s season. The first three weeks (Sept. 18, Sept. 25, Oct. 2), no results or standings are maintained. The fourth weekend – Sunday, Oct. 9 – is the championship tournament at the Moose Rugby Grounds in Elkhart. Pool play occurs in the morning, and those results will fill the afternoon knockout brackets.

Carmel and Charger have been fielding multiple sides at tournaments. Fort Wayne, Mudsock, Noblesville, North Central, Penn, Westfield and Revenge/Westside have been getting their runs in as well. Stay tuned for championship coverage.

Fall 7s is the main season for girls’ high schools, but reigning champion Independence Lady Warriors will absorb players from other teams for club 15s games in the spring. The original fall 7s schedule included a pre-season jamboree and Sept. 10 tournament, but it appears that Sept. 24 marked the first contact event of the fall. Springfield (Oct. 8) and St. Louis (Oct. 22) will host the subsequent tournaments, and then the state championship will occur at Liberty North HS on Nov. 5.

North Carolina Youth Rugby holds a short but sweet 7s block in the month of October. Last weekend was supposed to be the kickoff to the series but Hurricane Ian postponed the games. So now the tournaments will occur Oct. 16, 23 and 29.

Rugby Ohio is heading into Week 3 of its fall 7s series this Sunday, with three tiers of competition active. Proper standings are maintained across the five-stop circuit, all feeding into the Oct. 30 championship.

For teams like Highland, which fields three sides, the Buzzards can play up to nine games each Sunday. Highland is 14-2 so far. Brunswick, which also has two sides, went undefeated in Week 2 and beat Highland A 15-7.

The Rugby Oregon high school 7s series kicked off Oct. 1 at Glenhaven Park in Portland and continues for five-straight Saturdays. The champion is crowned on standings, so there’s no separate championship tournament, per se. Valley Panthers are the reigning fall 7s and spring 15s champions, and they started with two big results last weekend: 35-0 win vs. Newberg and 42-5 vs. Chinook. East County also had a good day, fending off Salem 33-5 and Newberg 35-0. Chinook banked its first win of season, 19-10 vs. Newberg, as did Salem with its 17-0 victory against Chinook.

The field reassembles for round two this Saturday and adds David Douglas to the lineup.

Rugby Pennsylvania has the fall 7s series on lock, and hosts a six-leg circuit prior to state championships on Nov. 6 at Manheim, Pa. Teams from outside of Pennsylvania – like New Jersey’s Morris and Maryland’s North Bay and West Carroll – are allowed to compete in the weekly tournaments but are not eligible for playoffs. They do a great job of injecting more competition into the series.

“It’s early in the season for all the teams and all look solid, lots of rugby to be played yet,” Knightmare coach Joe Capp remained modest. “Our main focus for this fall is building depth, getting the fundamentals right, and just enjoying playing the game.”

It’s a bye week and then the field resumes for Week 4 in Cumberland Valley, Pa. West Chester (Oct. 23) and Doylestown (Oct. 0) host the final rounds, and then it’s onto the championship.

There have been tournaments at Father Ryan (Sept. 10) and in McMinn (Sept. 24), and there’s another runout for Middle and East Tennessee teams in Knoxville for Halloween 7s. The seeding tournament is Nov. 5 and then the State Olympics 7s Cup is Nov. 19.

Raptors are the defending champion but head coach Richard Boone indicated it was a rebuilding year for the young but competitive team.

“Our newbies are stepping up, but are still so young in the game,” Boone explained. “It will be a while until they are ready to fill the void left by the six that graduated last year and are all now playing in college. We are also holding out hope that we will see more new recruits and that they will be those next-level athletes we want and need in our great sport!”

Look toward Columbia Central, Spring Hill and McMinn Tribe to push into the post-season.

All three Tier 1 teams have second sides in Tier 2, and the Majestics 2 are undefeated at 6-0. Layton Christian/American Fork and Mountain Ridge are also competing for a total of five teams in this group.

Rugby Washington is making its first foray into fall 7s and the organization lists four tournaments on the calendar: Sept. 24, Oct. 1, 15 and 22. Teams like Kent, Liberty, Rainier, Tacoma and Eastside + Panthers have activated. Expect a more social vibe with an emphasis on getting the competition off the ground and building general interest.


What to Watch: Women’s Weekend Rugby