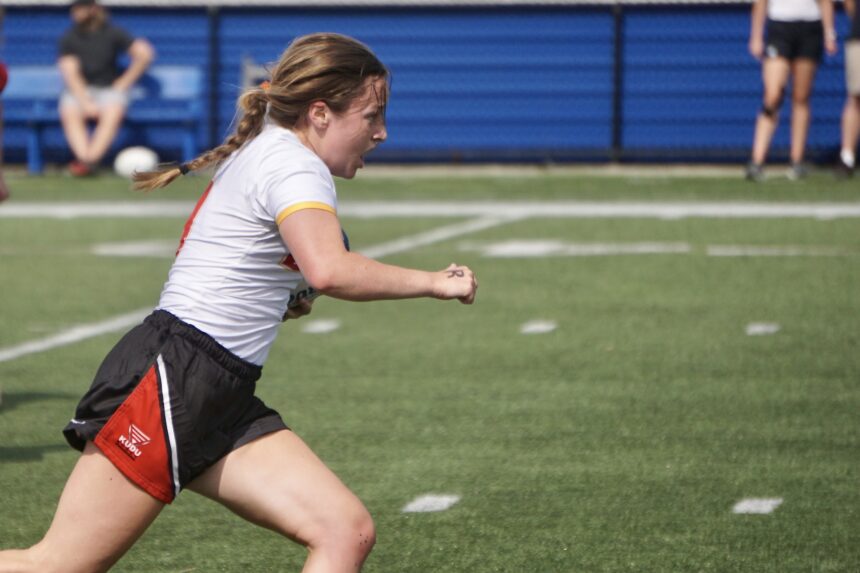 The Rugby Breakdown was on-site at the Girls’ High School 15s National Tournament at Notre Dame College, and thus events occurring from May 20-22 are receiving follow-up coverage. Interviews with MVPs and coaches are forthcoming, but the following is a recap of the weekend’s major events.

Eight teams reported to Atlanta, Ga., (read the preview) for the USA Club Rugby 15s National Championships. The women’s DI semifinals occurred on Friday, the DII semis on Saturday, and then finals were held Sunday. See TRB’s brackets, which include Super Regional and league championships.

In the DI semifinals, NOVA beat the Chicago Lions 53-20, and the Colorado Gray Wolves defeated Tempe 51-11 to advance to Sunday’s final. Read more.

Five minutes in, flyhalf Emily Blease was over the whitewash, and fullback Emily Wessel kicked the conversion for a 7-0 lead that held for the next 10 minutes. Lock Maria Michelotti closed the gap to two points, scoring the Gray Wolves’ first-half try, and then NOVA responded through flanker Scout Cheeks, who scored her fourth try of the championship weekend in minute 21. NOVA led 14-5 with Wessel’s extras, and then the fullback added a penalty to go up 17-5 into the break.

The Gray Wolves were on the hunt second half and opened with the first of two Madison Williams tries. Flyhalf Justine Perl added the conversion, 17-12. The middle portion of the half was a flurry of activity, and NOVA ran in back-to-back, crucial tries through No. 8 Maureen McInerney and wing Emily Fulbrook (27-12). There were 15 minutes to play and Colorado needed three scores. Williams dotted down a second in minute 68 and Perl’s conversion got it to 27-19 with 10 minutes to play. And although the Gray Wolves had experience in these comeback moments this season, the NOVA defense didn’t allow it: 27-19 the final.

There was no rest day for Division II, and on Saturday, Knoxville beat Berkeley 70-10, and Providence prevailed 27-13 against Palmer College in the semifinals. A Tennessee vs. Rhode Island showdown awaited for Sunday.

Providence built a 14-0 lead in the opening 15 minutes, as outside center Nazareth Cardoso and lock Nyatasha Jackowicz scored, and flanker Ashley Hanson kicked the extras. Wing Laura Morse kicked a penalty in minute 30 to put the Minx on the board (14-3 HT) and then scored a second-half try to account for Knoxville’s eight points. Hanson also took shots at goal and slotted two penalties in the second half, while wing Danielle Becker scored a try in the 25-8 win.

Lock Tiara Mack was named championship MVP, and like many Providence players, has a special connection to the late Kathy Flores, to whom this season was dedicated. Mack is a Brown University graduate and years-long member with Providence, two teams that Flores was coaching when she passed away in October 2021.

Remember: High School and High School Club nationals are different events that feature different types of teams. The former is for single-school teams – that is, the team is associated with a high school and the majority of players hail from said school. The latter is for club teams, or multi-school teams. The same separation is seen with the boys, although the boys hold their events together (Elkhart, Ind., this year) unlike the girls.

The Amazons and Majestics won their games against United and the San Diego Mustangs (see full results), so regardless of their outcome against each other Friday, they were both heading to the final Saturday. At the end of regulation, the teams were tied 7-7, and since there’s no overtime on day one, the game progressed directly to the tiebreaker. Teams take five shots apiece at goal, and the best of five win. The Amazons kicked one more field goal than the Majestics did for the win.

Saturday began with the middle school final between SacPAL and the Majestics. The teams had split their games on Friday – the Amazons won 19-15 and then the Majestics won 20-17 – but the NorCal team pulled away in the final: 31-12 for the title.

United and the San Diego Mustangs then faced off for third. On Friday, United beat the SoCal side 10-5, and that same point differential was repeated in the Saturday rematch: 20-15 to United.

Abby Gustaitis and Alex Corbisiero were on the mic for The Rugby Network and they called the Amazons vs. Majestics final, which featured all the big hits and skillful passing that one expects from these two teams. There was some wear, as they were playing in their fourth game in two days but plenty of good rugby. The Amazons won 22-17, marking their third national title. They’ve featured in several finals, and won the trophies in 2010 and 2016.

The final stop (for the women; the men have two more tournaments) on the 2022 HSBC World Rugby Sevens Series occurred in Toulouse, France, and the USA finished 7th. The Eagles went 1-2 during pool play, dropping games to Fiji (26-12) and Australia (31-0) and beating South Africa 22-0. The Eagles got through to the Cup quarterfinals to face Australia again. The USA closed in but lost 24-14, and then lost its Plate semifinal 19-7 to Canada. In the 6th game of the weekend, the Americans beat Brail 15-7 for 7th.

During the regular season, Oregon held a mixture of games for the girls’ high schools – 12s, 10s – whatever numbers afforded. But the two finalists – Valley Panthers and East County/Grackles – had the numbers for 15s, and thus played a 15s final on Saturday. A great game followed, and Valley added an Oregon 15s title to its fall 7s title with a 31-28 win. Chinook beat Salem 27-24 for 3rd. Newberg was a try better than Canby in a 50-45 decision for 5th. And David Douglas took 7th with a 39-10 win against the Renegades

In the Women’s Premier League, all of the traveling teams won their respective games. In the Red Conference, New York traveled to Twin Cities, Minn., and kept its undefeated record intact with a 34-10 win. San Diego came up big with a 72-8 win against ORSU in Oregon. In the Blue Conference, Berkeley plays its first game in three weeks and celebrated with a 75-0 road win against Chicago North Shore. The game of the weekend occurred in Boston and a fantastic back-and-forth evolved between Life West and Beantown, as expected. In the final stretch, the Gladiatrix pulled ahead for good: 30-25 for the win.

On the other side of the bracket, the Saracens started Lotte Clapp at wing and Alev Kelter at outside center. Kelter kicked two penalties and a conversion in the Saracens’ 30-10 win against the Harlequins. The championship is Friday, June 3 at 3 p.m. local (10 a.m. ET) inside Sixways Stadium in Worcester, Eng.


Eagle HS Breaks Out at Nationals